HE was in the Slam Dunk Contest?

You know their names, not their dark dunk contest histories.

Share All sharing options for: HE was in the Slam Dunk Contest?

The "Slam Dunk Contest," historically, is not one thing. In the decades since the original 1976 ABA dunk contest, the competition has taken on many forms, growing, shrinking, twisting and sometimes even disappearing from one All-Star Weekend to the next.

The rules and format have seen the greatest modification, but the selection of players has been just as important. There is the persistent obstacle of player willingness-- if you could ensure the consent of the NBA's best dunkers, the contest would be great every year -- but also, it seems, the issue of the league just not picking well. I'm not talking about great dunkers who failed because of unpreparedness (think Gerald Wallace in 2010) or over-ambition (like James White in 2013, which still breaks my heart). I'm talking about guys who clearly had no business in the dunk contest, yet somehow ended up in the .01 percent of the league invited to participate.

There is a stretch from the mid 1990s to the early 2000s -- bridging the two years (one a lockout) without a contest -- that stands out to me as the golden age for mediocre dunkers in the dunk contest. Those contests included six competitors, selected much less thoughtfully than the field seems to be these days. In particular, there was a trend of arbitrarily including rookies and sophomores, sometimes because they were just assumed to be bouncy, but also as injury understudies chosen from the rookie-sophomore game pool.

It's an era littered with randos, but that's not what we're here to talk about. Some of those young, odd participants went on to have solid careers, enough so that folks forgot their ignominious moments of failed dunkery. We're here to drag those skeletons out of the closet.

Here are my five favorite decent NBA players who were once curious selections and failed participants in the dunk contests of their youth:

Allan Houston was a fine NBA player and one of the deadliest scorers on some of the best Knicks teams in recent history. I also feel like I can remember every dunk he ever converted in his career, because there were no more than four of them. He was never a dunker.

And yet, when Harold Miner went down with a back injury in 1994, the Pistons rookie got the nod. It didn't go so hot. Allan probably has nightmares about these 90 seconds:

- The sheepish smile and head-hang as the ref hands him the ball are foreboding. This is the look of a man who knows he's about to humiliate himself. 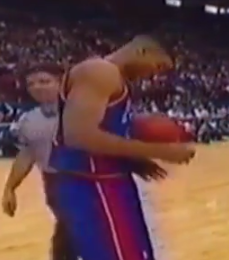 - At no point in his entire 90-second session does Houston break into a run. After his first attempt, he stopped even straying from the paint, as if occupying a smaller and smaller range would just shrink him into oblivion so no one could see him anymore.

- Dikembe Mutombo and Patrick Ewing share an "oh, no, this guy's gonna die out there" moment: 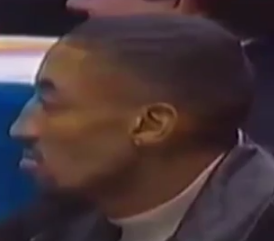 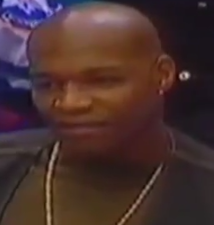 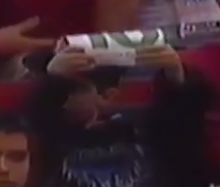 Houston bouncing the ball off his own noggin into a standing two-handed finish is perhaps the worst made dunk in dunk contest history. You know something's pitiful if Charles Barkley goes out of his way to compliment it.

Davis was a terrific big man for a long time, but not someone I'd consider a leaper. He was another injury replacement, and he got a few down (including a decent 360) simply because he was tall and strong. Still, this was rough enough that Davis just aborted the thing midway:

- I don't know what the endgame was here, but Davis just walked up and bounced the ball straight into the damn crowd.

In no planet's atmosphere would the physics of that throw send the ball toward a place where it could be dunked. Unless the ball was really flat or something, that is worst and stupidest possible bounce. 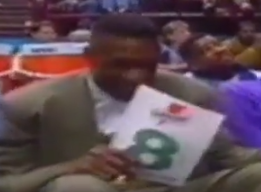 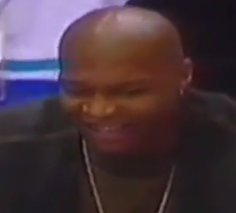 - Davis flat-out gives up! Just under the 40-second mark, he bails: 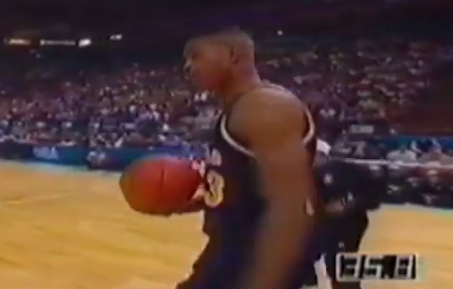 There is ALMOST HALF the clock remaining, and Davis just picks up his ball (White Hat Guy's chair) and heads home. He has nothing left.

Darrell Armstrong would go on to have a productive NBA career, but in '96, he was a 27 year-old deep-bench guard generously listed at 6 feet tall. He could dunk, which was novel, but this was not even remotely a Spud Webb situation. This was a tragedy:

- The first dunk gets people up, then eeeeeverything else lets people down. Armstrong's a guy who might have done well with limited attempts. All that time and running wears down those little out-of-shape legs.

- An endorsement from Shaq is not necessarily something to trust. The opposite, probably. They didn't know this yet in 1996. 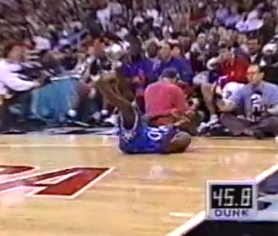 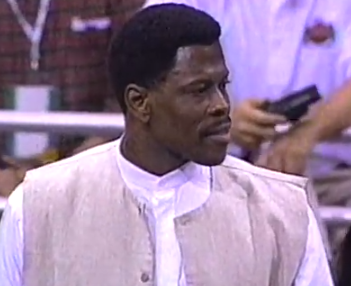 Why wear a shirt under that? Why not just go full Aladdin? Huge mistake. 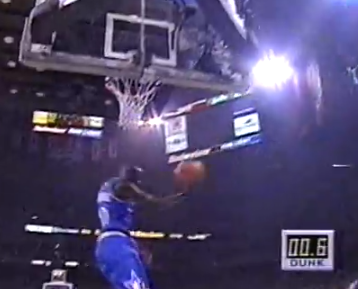 Though a shooter, Ray Allen was not Allan Houston; he was a decent in-game dunker in his youth. You still catch the occasional whiff of it, even today. But Ray Allen neeeever had any business in the dunk contest, and visibly wanted to get his dunks over with so he could go home and eat pasta with butter:

- Disapproving Dikembe looks like he just swallowed a fart: 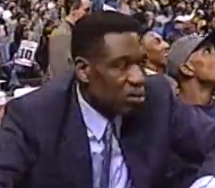 - If Allen had to fill 90 seconds, this might have been uglier. Instead, he worked quickly, threw down a pretty impressive first dunk, converted a basic reverse, then missed his most ambitious attempt and got the hell out of there. He acquitted himself pretty well. But Allen gets extra shame points for doing absolutely nothing to pump up the palpably bored crowd. This dunking exhibition will be conducted with colorless efficiency and your hollering will not be acknowledged. Good day.

Again: young, reasonably athletic, but never a great dunker. Also plainly unprepared. All the ingredients for a sorry performance: 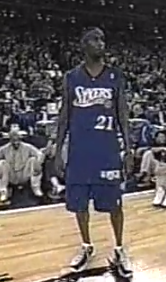 - One attempt per dunk was tough. Efficient, but harsh, and not a forgiving environment for Larry Hughes' nonchalance.

- 2000 was peak Camcorder At The Dunk Contest. Do Kevin Garnett and Shaq still have these tapes somewhere? I would pay handsomely for raw courtside footage of Larry Hughes failing to convert a single dunk: 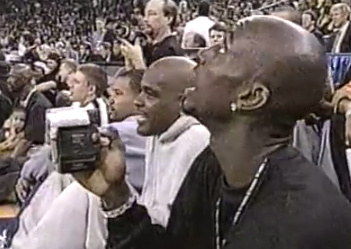 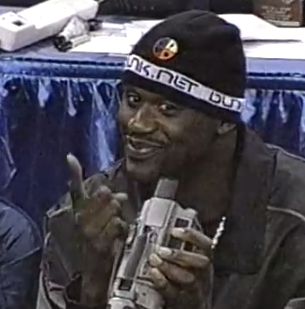 - What hit off the back of your head, Larry? Don't blame your head for this. Well, not the outer part of it.

- WE SURVIVED Y2K WE HAVE WILDLY UNNECESSARY DIGITAL DISPLAYS FOR 1-10 SCORING AND OUR WEBSITE URL ON THE DESK DO YOU KNOW WHAT WEBSITES ARE TECHNOLOGY RULES WE'RE GONNA LIVE FOREVER: 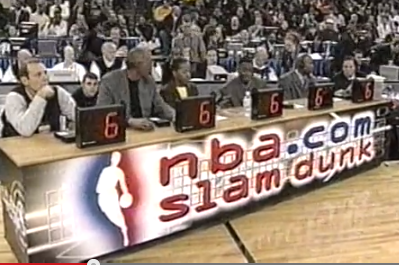 No way. Doing something funky pre-dunk is a clever way to distract people from the fact that you aren't actually a very good dunker (Allan Houston nods, then weeps), but this was clearly never going to work, and it wasn't that cool to begin with (and I say this as someone who mastered that exact move in NBA Live 2005). At least he tucked his jersey in.

- This is the happiest moment of Kevin Garnett's life: 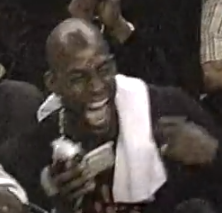 Yes, Garnett would go on to win a championship. That ranks second.

- Meanwhile, Antawn and Lamar are having an even better time: 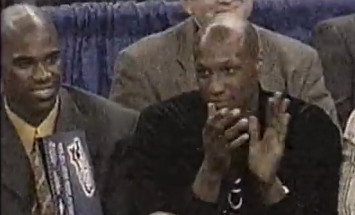 - What would Jesus do? Jesus would GET THE DAMN CAMERA OUTTA MY FACE: 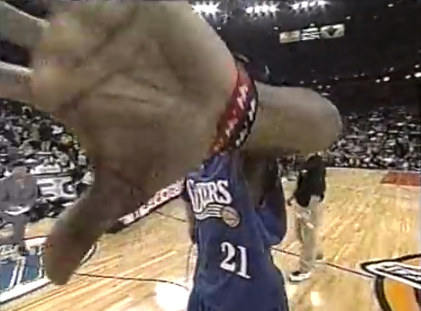 - Hughes actually made his last dunk off a feed from Allen Iverson, but the camera never caught it, so it is stricken from the record. You are awarded zero points. Or 30 points, since that's apparently the minimum.

Those are my five favorite guys who went on to become familiar names after utterly failing in undeserved dunk contest selections. Of course, my memory only goes back so far. I invite input about unworthy competitors I missed.

SB Nation presents: You have to see this dunk to believe it