Winter Olympics 2014: Reactions from a wild game between USA and Russia

Share All sharing options for: Winter Olympics 2014: Reactions from a wild game between USA and Russia

Team USA hockey won a thriller over Russia on Saturday, picking up a 3-2 win after T.J. Oshie singlehandedly outscored the Russians 4-3 in a shootout.

For those who spent their Saturday morning sleeping in instead of watching the game, here's a look back at the main storylines from the USA's big win.

In the NHL, players are only allowed to shoot once in shootouts. That's not the case in Olympic play; if the score is still tied after the first three shooters go, coaches can send the same player out there over and over until their skates fall off.

According to USA coach Dan Bylsma, they were going to ride Oshie until the very end.

Bylsma said plan all along was to ride Oshie once SO got to 4th rd. "TJ has been exceptional in the shootout this year and in his career."

Part of the reason Oshie made the roster was his ability to sink the puck into the back of the net in shootouts.

Before the Olympics, Team USA GM David Poile told reporters that one of the reasons Oshie was named to the team was his shootout ability.

Oshie was told what Poile said & this was his response: "Glad I've been working on it. Glad I could do something that could get me ...(1/2)

Needless to say, we all know where Team USA will turn moving forward if they go into another shootout situation. And if you have never heard of the St. Louis Blues' star before today, his last name is pronounced Oh-Shee.

Here's a Vine of all four of Oshie's goals in the shootout:

Game for the ages

In terms of medals and trophies, nothing was up for grabs between the United States and Russia in Saturday's action. The way the players played and the coaches coached, though, you would have sworn the Stanley Cup and a gold medal were on the line.

It was truly an instant classic in Sochi. Crisp offense, strong play in goal, and a thrilling shootout to close things out.

Bylsma: "I aged a couple of years in that shootout tonight. "

Dan Bylsma: "You saw pretty much everything in this game. An unbelievable setting and atmosphere."

For those who missed it, NBC will feature overtime and the shootout in their primetime showcase tonight.

Jonathan Quick wasn't great in the shootout, but he did more than enough to keep Team USA alive for Oshie to win it. After making a couple of deep runs with the Los Angeles Kings, Quick is used to the big stage.

Jonathan Quick may not have a pulse. "You go through shootouts during the regular season. You get put into situations like that a lot."

While the United States won, it seemed Russia had take the lead late in the third period as Fedor Tyutin appeared to score. The referees reviewed the goal, though, and ruled the left post had come off its mooring. 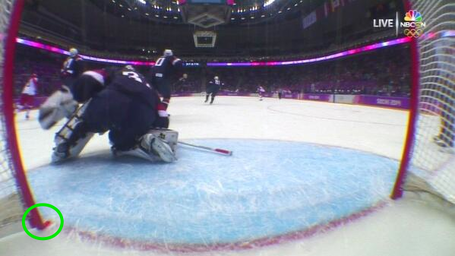 The Russian players were clearly frustrated after the game, and one alleged Quick may have moved the post intentionally.

RUS def Slava Voinov: "Quick may have pushed the net off on purpose. I know him; he sometimes does these things. But we need to score more"

It will be interesting to see if anything comes from this, but right now it seems to just be sour grapes from Voynov.