Five straight wins for the Heat, including a dominant revenge win over the Thunder and an impressive victory over the Bulls without LeBron James.

The two-time defending champs are currently playing at a championship level, having won five straight. That includes a dominant victory over the Thunder, which featured LeBron James bleeding his own blood:

It's safe to say Paul George has broken out of his slump. In the three games since the All-Star break, George averaged 31.0 points while shooting 50.0 percent overall and 57.1 percent from long range.

I'm sure there are some people who believe Russell Westbrook's return will "doom" the Thunder. I am not one of those people. Oklahoma City may be 0-2 since Westbrook returned, but some initial struggles should have been expected. It also didn't help that the two opponents were the Heat and Clippers.

The Rockets had their eight-game winning streak snapped in a tough overtime loss to the Warriors, but they returned to their winning ways in a thriller against the Suns. Much credit can be given to Patrick Beverley for the comeback win:

The Spurs' long Rodeo Road Trip finally came to a close in Phoenix, and while they may have been blown out at the end, a 6-3 mark has to be deemed a success.

The Clippers redeemed their week by going into Oklahoma City and delivering a second straight home loss to the Thunder. Jamal Crawford did his thing, scoring 36 points and pouring in several clutch buckets:

The Warriors have won three straight games, and they got an unlikely hero in their last victory. Jermaine O'Neal notched 23 points and 13 rebounds in a win over the Nets, both season highs.

The Suns lost a heartbreaker at home to the Rockets on Sunday, but Goran Dragic continued to show why he was one of the biggest All-Star snubs. After pouring in a career-high 35 points, Dragic is now averaging 20.3 points while shooting 50.8 percent overall and 41.3 percent from three.

The Blazers have run into some injury problems, with several key members of the frontcourt, including LaMarcus Aldridge, dealing with various issues. Damian Lillard has helped Portland survive for the time being without Aldridge, while Thomas Robinson is busy rejecting shots back into the face of Corey Brewer:

James Johnson has enjoyed a career resurgence with the Grizzlies, posting a PER a tick over 19 thus far. There's also this:

The Mavs are 7-2 in February, with the only two losses coming against likely playoff teams in the Heat and Bobcats. Dallas will likely have to continue to play well to hold off Memphis for the final playoff spot in the West.

The Raptors have won five of six, taking advantage of an Eastern Conference-heavy slate. Toronto's strong play has allowed them to withstand Chicago's charge for the No. 3 seed for the time being.

On Friday, the Bulls put forth their best offensive effort of the season against the Nuggets. That was then followed up with arguably their worst offensive showing of the year in Miami. Seven shot-clock violations is so bad it's impressive.

The Bobcats are looking more and more legitimate by the day. Four straight victories, including a big home-and-home sweep of the Pistons to gain some much-needed separation in the standings.

Kevin Love continues to put up monster numbers ... and the Wolves continue to putter along despite it. Love is averaging 34.1 in February, which is tops in the NBA.

Mike Scott apparently really likes playing the Knicks. After setting a career-high in points against New York last year, Scott did it again last week, pouring in 30 points in a big comeback victory. 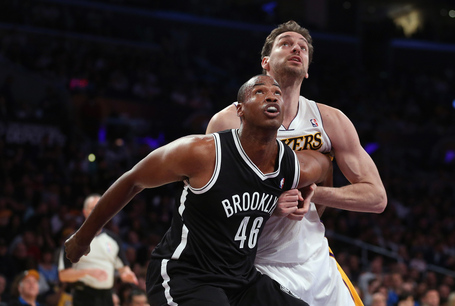 • Collins first openly gay active NBA player • Reactions from around the league • Collins 'focusing on basketball,' not history • NetsDaily: Why this isn't a 'marketing move'

Amid trade rumors and a report of strained ligaments in his shooting wrist, Isaiah Thomas was excellent last week, averaging 26.7 points in three games. In a win over the reeling Nuggets, Thomas, Rudy Gay and DeMarcus Cousins combined for 92 points.

The Pelicans have lost five of six games as their disappointing season carries on. The last two losses came by a total of four points, and up next is a date with the Clippers. Woof.

The Nuggets are a mess right now, with things reaching a boiling point after a disastrous loss in Chicago. Nuggets head coach Brian Shaw went off on his team following the 28-point defeat, but things got no better in the next game.

After winning six games in a row following the firing of general manager Chris Grant, the Cavs have gone back to their losing ways, dropping two games in a row. Cleveland is now five games out of the final playoff spot in the East.

The Pistons' defense continues to be miserable and it could ruin their chances of a playoff berth. The Pistons have given up 111.0 points per game in the last four contests, going 1-3 during that stretch.

Victor Oladipo had one of the best efforts of his rookie season last week, tallying 30 points, 14 assists and nine rebounds in a double-overtime thriller against the disastrous Knicks:

The Knicks continue to be a train wreck, seemingly finding ways to reach new lows every game. The latest debacle was a loss to a depleted Hawks team in a game New York led by 17 in the second half.

After winning three games in a row, the Jazz have now lost three in row. But on a more positive note, Enes Kanter has been good of late, scoring 25 points in each of the last two games.

The detonation of the 76ers

Philadelphia GM Sam Hinkie may have been the most important person at the NBA trade deadline. His decision to trade key pieces for fringe players and draft picks says a lot about the state of the NBA under the new collective bargaining agreement.

The detonation of the 76ers

After yet another round of trade rumors, Pau Gasol remains a Laker yet again. Gasol's tenure in Los Angeles may soon be coming to an end anyway, which would wrap up quite a successful run there.

The Celtics' on-court product is no good, so much of the focus of late centered around a possible Rajon Rondo trade. Rondo of course stayed put, so now maybe focus will turn to the draft.

The Bucks are having a god-awful miserable season, but young point guard Brandon Knight has shown some progress. Knight had 30 points, eight assists and five rebounds in a loss to Indiana, and he's putting up career-high numbers in many categories.

The Sixers have lost 10 games in a row and just traded away two of their better players in Evan Turner and Spencer Hawes. Poor Thaddeus Young.