WWE Elimination Chamber 2014: What we learned

The WWE Network launches on Monday and the road to WrestleMania is a whole lot clearer. Here's a recap of Sunday night's Elimination Chamber PPV.

Share All sharing options for: WWE Elimination Chamber 2014: What we learned

Sunday night's WWE Elimination Chamber pay-per-view not only wrapped up the last major landmark on the road to WrestleMania, but also signified the end of an era. On Monday morning, the WWE Network launches. You can find out more and get a one-week free trial here. There's no reason to not at least check out the one-week free trial, because the WWE Network features every PPV event in WWE, WCW and ECW history.

Oh, that's not enough for you? You've got some nerve, buddy. 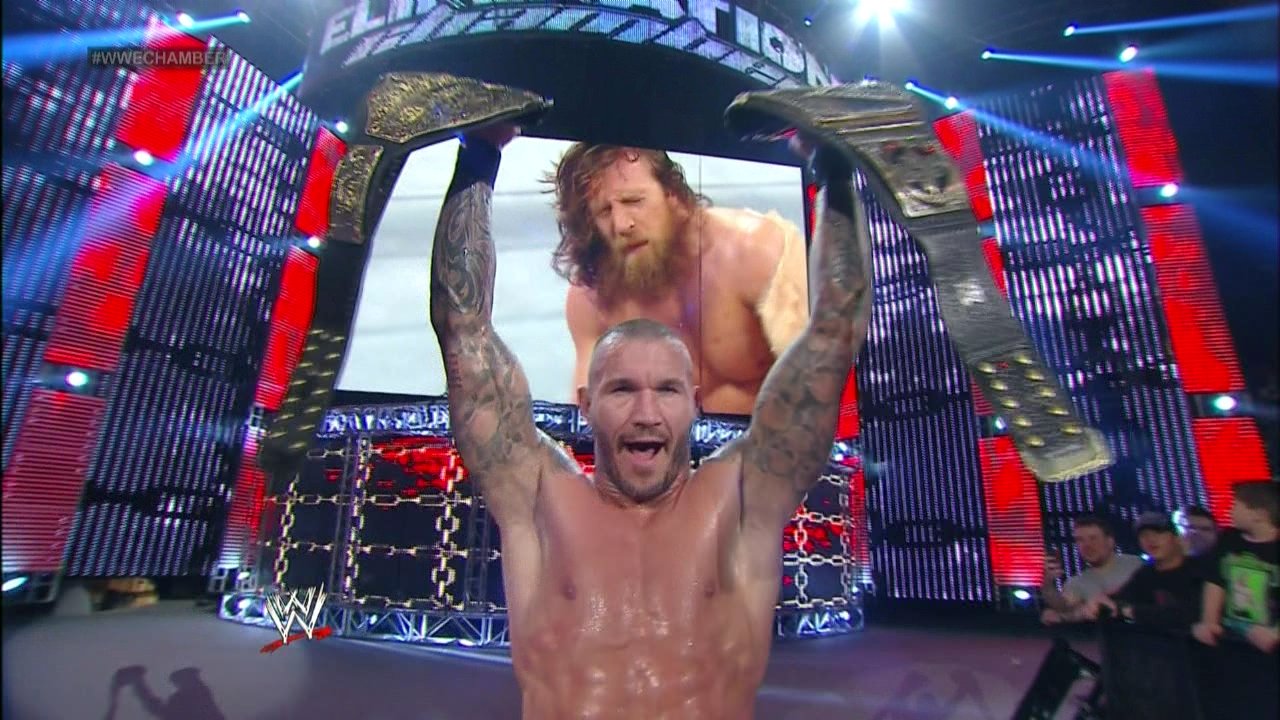 Well, if that's not enough of a selling point, the WWE Network subscription also includes every new WWE PPV, live and streaming as it happens. No more shelling out $40-$60 each month for the matches they don't put on free television. (Or, as has been increasingly more likely over the last few years, no more scrounging the Internet for a site to pirate a livestream of the event.)

At any rate, the 2014 Elimination Chamber was the last major event and the last PPV under the viewing system as we've known it for 20 years or so. WWE offered a ridiculously stacked card and absolutely delivered on all fronts. The end result was the best PPV we've seen in a long time and put all the pieces in place for WrestleMania.

Let's look at what we learned.

What we learned: Basically nothing. We thought this live pre-show match might be the start of a Rhodes Bros. split that might culminate in a long-desired brother vs. brother match at WrestleMania. Alas, no dissent was present. Also, Rybaxel continues to tread water, doing nothing of note and doing it like crazy.

What we learned: Big E is, at bare minimum, 95% chest. He also continues to be great and needs to get the company behind him even more. He'll go on to defend his title at WrestleMania (unless they forget it exists, which can never be ruled out). A possible US Title vs. Intercontinental Title unification match might be in the cards, but they'll have to get the US Championship off Dean Ambrose first, because he'll be otherwise occupied. (More on that later.) Also, we learned that Jack Swagger's haircut legally qualifies as a cast member on "Full House."

What we learned: The New Age Outlaws are old men who wrestle with their shirts on. Okay, it's possible we knew that one already. It's absolutely baffling that they're the champions in 2014, let alone that they continue to be the champions. This match was surprisingly good, except for one terrifying moment toward the end. This moment:

Eeeesh. So yeah, the Usos came really close to winning the titles and will hopefully be given that vote of confidence soon, because so help me god if we have to see a New Age Outlaws match at WrestleMania ...

What we learned: That Titus O'Neil is about to sink or swim as a singles wrestler, although he's unlikely to get any sort of match at WrestleMania or anything. This wasn't bad and Young did his best to make his former Prime Time Players partner look good. We'll always remember them in happier times.

The Wyatt Family def. The Shield

What we learned: That sometimes a match really CAN be as good as we were all expecting. This six-man tag went all over the place. It even went through the poor Spanish announce table. 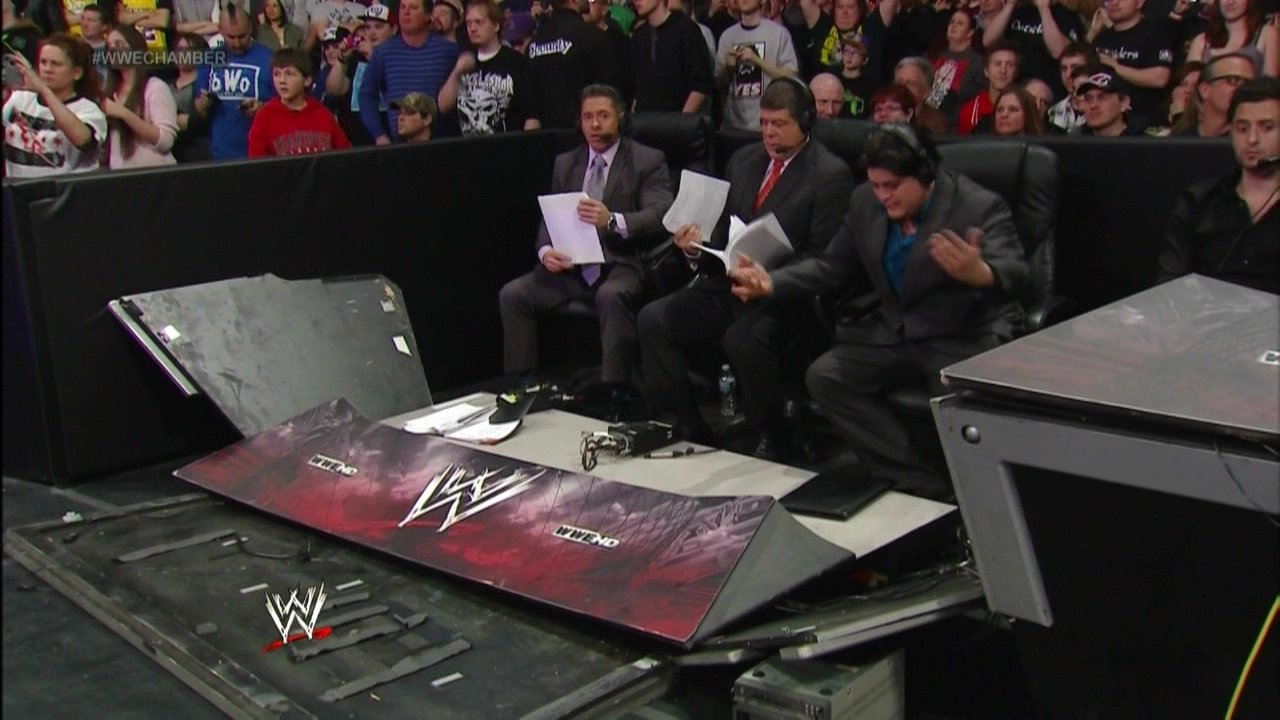 Dammit, Wyatts. That table was two days before retirement. Anyway, these six dudes beat the snot out of each other and it was glorious and during the match my third eye opened up and I saw the face of god, but that's neither here nor there. The main point is that the Wyatts looked like the world-beaters they are and are moving on, while Roman Reigns continued to look like the anointed one, standing alone against the monsters at the end and coming up JUST short. The Wyatts showed a willingness to sacrifice themselves for the benefit of the team, while the Shield was left splintered and divided, with Reigns having to go it alone. This will likely be the straw that breaks the backs of the Hounds of Justice and we're probably looking at a three-way dance at WrestleMania, where Reigns will emerge victorious just before having the rocket officially strapped to his ass and making a beeline for the main event.

What we learned: That you always need a comedown match after the non-main-event tears the house down. And that if you're the WWE, you want to try to put as much distance right now between something the crowd loved to death and Batista, because they REALLY need people to like Batista.

What we learned: lol boy, people REALLY don't like Batista. Good luck with that, WWE.

What we learned: So much, really. That the Elimination Chamber continues to be great. That Cesaro is strong and will continue to be the absolute best. That Christian can still perform pretty well in a big match. That Sheamus is still just as good as he was back when he didn't talk a lot and just clubbered the hell out of fools.

The most important things we learned, though, include the following:

1. John Cena will likely face Bray Wyatt at WrestleMania, because the Wyatt Family showed up near the end of the Chamber match and annihilated Cena, allowing Orton to pin and eliminate him.

2. Randy Orton will hold the belts heading into WrestleMania, where he is scheduled to face Batista (lol). HOWEVER, those plans could now VERY WELL be adjusted to allow for the most popular wrestler in the world right now, Daniel Bryan.

3. Bryan was screwed out of a victory by (Corporate) Kane, who pulled the referee out of the ring before the ref could count to three for a pin on Orton. Kane then FURTHER hit Bryan, allowing Orton to hit the winning RKO. Vince McMahon could very well show up on Monday night's "RAW" to insert Bryan into the main event of WrestleMania (meaning a three-way dance, which has happened several times before at the year's biggest event). This could also lead to a singles match between Bryan and Kane, or a match between Bryan and the WWE COO, Triple H.

So yeah, a lot of pieces in place for WrestleMania and a lot of questions yet to be resolved, but nary a misstep in the whole PPV. (Except for Batista. Woof.) We're excited to see where this all leads. The Network Era begins now.