The Netherlands won 24 medals in Sochi, 23 in long-track speed skating, a 24th in short-track. It's a strange, awesome national obsession, and they back it up by kicking serious ass.

Share All sharing options for: 2014 Sochi Olympics: Dutch Dynasty, or why the Netherlands dominates speed skating

If you looked at the medal count, you probably noticed the Netherlands creeping near the top, even though Dutch victories rarely appeared on any sort of NBC programming. This is because the Dutch won 24 medals, and all 24 came in some sort of speed skating event.

A point of clarification, though. When we talk about speed skating, we're in fact talking about two Olympic disciplines. There's what the IOC calls "speed skating," which is two skaters on a 400-meter rink, alternating lanes, competing against the clock and not against each other.

And there's what the IOC calls "short track speed skating," which features six skaters on a surface the size of an ice hockey rink, jostling against each other for position. They overlap in length, but not in competitors: only two people have ever competed in both in one Olympics, including Jorien Ter Mors of the Netherlands this time around. (She medaled in the long track team pursuit and 1,500 meters.)

America prefers short track. It's like NASCAR. There are crashes. There's jockeying for position. There are six people on ice, clearly trying to outmaneuver each other. Long track is just two people and a stopwatch, skaters powering through long straightaways without so much as a glance at each other in hopes of shaving off hundredths of seconds. It's kinda boring, because the only thing being chased is time.

What bores the Americans fascinates the Dutch, and for good reason. The Dutch have 105 long track medals, 38 more than the country with the second most.

And in Sochi? Simply put, it's tough to recall any Olympic discipline being so thoroughly dominated by one nation as the Netherlands dominated speed skating in the 2014 Winter Olympics. Of the 30 individual medals awarded, they took 21, including six golds, and they also claimed gold in both of the team pursuit events. Meanwhile, on the short track, the men's 500 meter bronze won by Sjinkie Knegt was the first in Dutch history, and the only Dutch medal in Sochi not earned in long track speed skating.

The Netherlands has a history of swinging above its weight class in sports: It's a nation of 16 million that's thrice gotten to the finals of the World Cup, including in 2010 in South Africa. But their control of speed skating is unheard of.

As such, the country supports their squad. A raucous contingent of Dutch fans made it to Sochi, including the nation's royal family. Look: 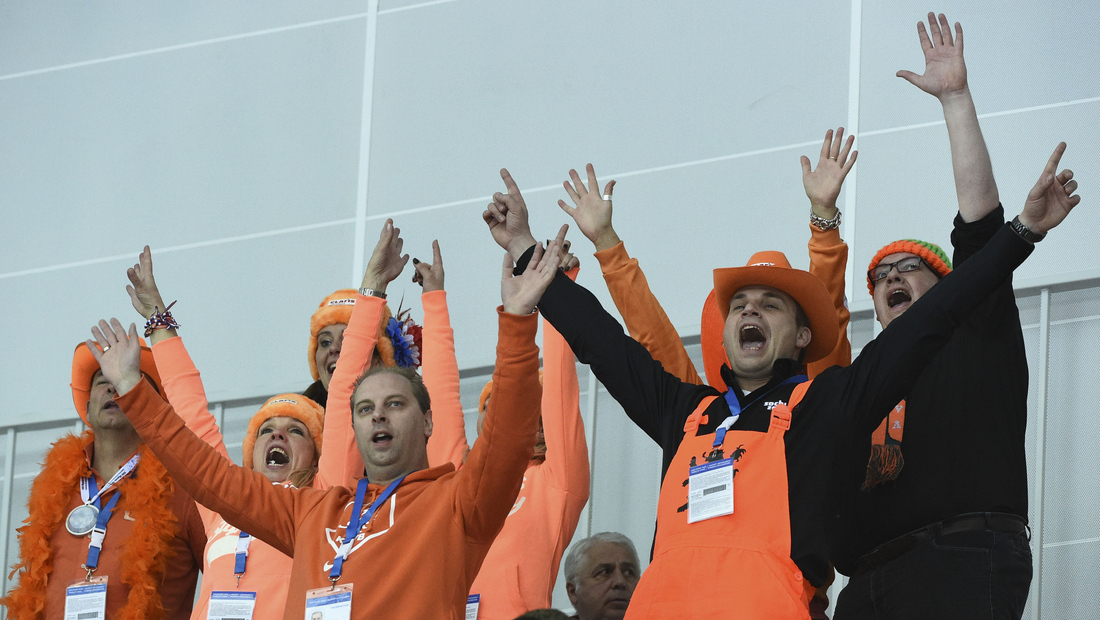 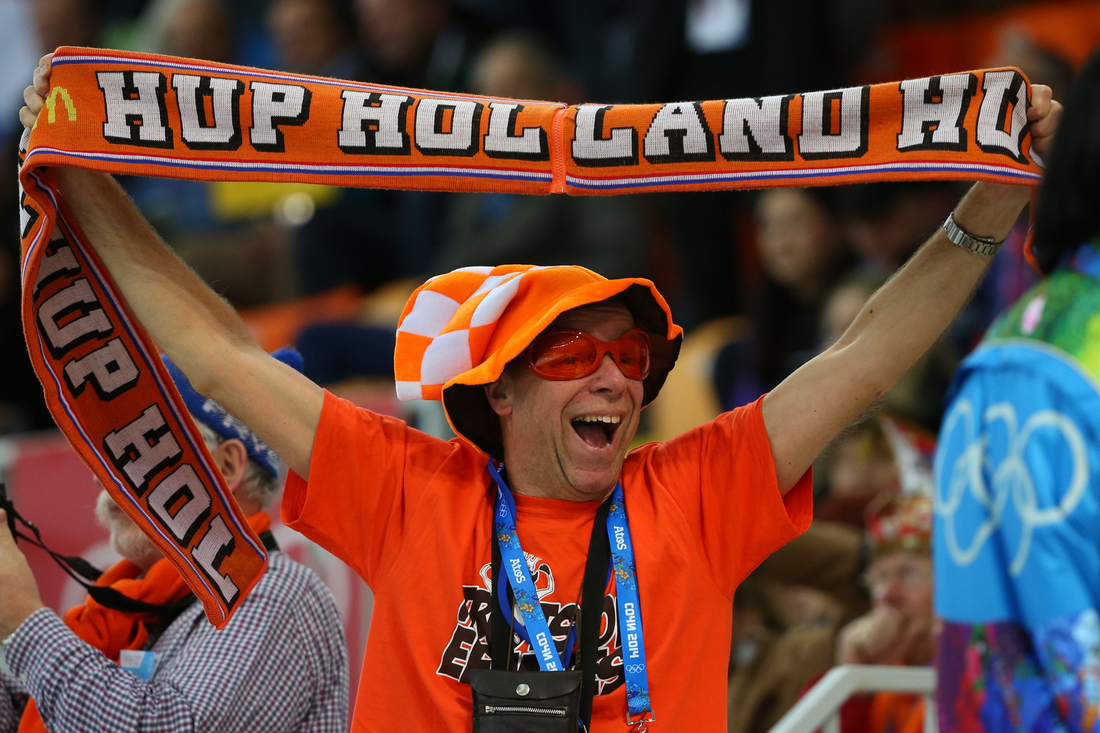 Mind you, ain't no quick trip: 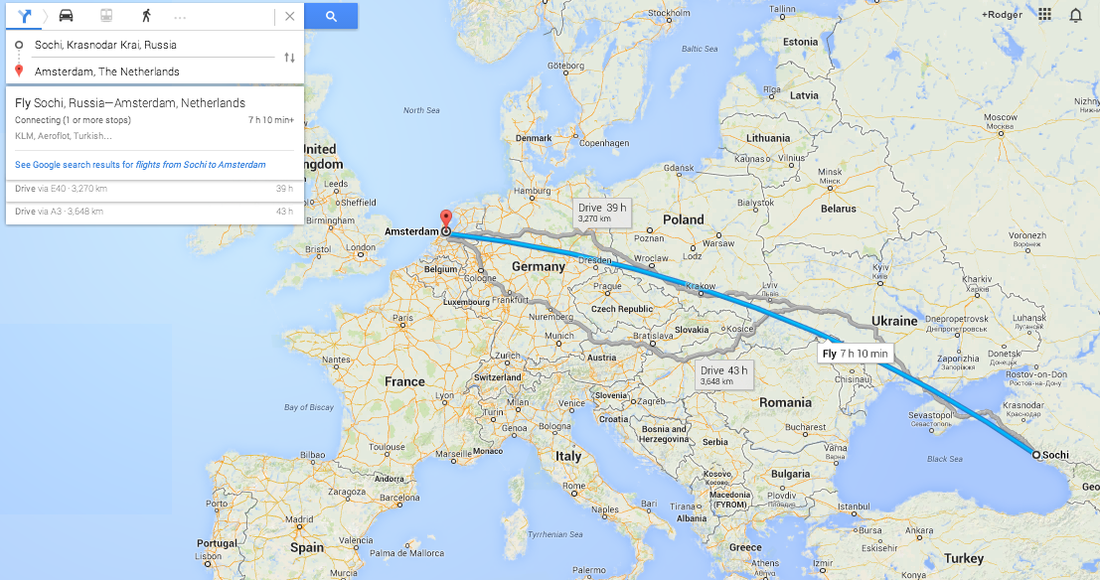 The orange-clad crazies go to every international speed skating event, and Time caught up with them 2010. It was great because we could see how bad Dutch people were at explaining why they like speed skating:

When you ask Dutch fans to explain why they get so psyched for this sport, they often leave you feeling even less enthused about it. "I like counting the laps," says Jeanine Renden, who along with her husband was wearing an orange wig with two lions perched at the top (like on the Dutch coat of arms). "It's exciting." Not nearly as exciting as her hairdo. If counting isn't your thing, you can always stare at the scoreboard. "It's every exciting to compare the times," says Dutch fan Eric Vanserstraadan, who was sporting two Dutch flags, one painted on each cheek.

Why is there an Olympic sport that arouses so much passion from one nation and so little from all the others?

For starters, let's think about countries. Looking around the Winter Olympics reveals something pretty simple: countries are good at sports that match their geographic layout. Countries with mountains produce great downhill skiers. Scandinavian countries produce great cross-country skiers, because their nations are covered with snow. Norway wins all the ones with "Nordic" in it, because duh.

The Netherlands isn't particularly fit for the Winter Olympics. There are no mountains. It's relatively temperate.

It does have one geographic trait: a nationwide low altitude. You can tell this from the name: Nether = low, and the country is nicknamed "The Low Countries." There are a couple of hills in the south of the country, but none higher than 1,100 feet, which is notable, but not particularly unique. What makes the Netherlands different is that about 20 percent of the nation is below sea level, about half of it is less than a meter above sea level.

Basically, the Netherlands should be underwater. Vast swaths of the country should be subject to near-constant flooding. It isn't flooded constantly because of a centuries-old system of dykes, dams, and canals. (The "Dam" in Amsterdam and Rotterdam does, in fact, mean "dam.")

And for as long as Dutch canals have frozen, Dutch people have skated on them ... The Netherlands is perfect for speed skating mania.

It's tough for rivers to freeze, because they flow. But the Netherlands is covered not by roaring rivers, but by placid canals and other artificially made bodies of water. And for as long as Dutch canals have frozen, Dutch people have skated on them, because a) it's fun and b) you can get around every place faster. The Netherlands is perfect for speed skating mania.

If you're American, your familiarity of Dutch speed skating obsession probably comes in one of three varieties: 1. You have no clue 2. You hear about it every four years and then forget about it 3. You read Hans Brinker, or the Silver Skates, an 1864 children's story about a kid who enters a skating race to win some silver skates.

It's kinda hogwash. The author, Mary Maple Dodge, had never been to the Netherlands. Brinker is not a folk hero in the Netherlands, where nobody reads that story when they're kids. (That book also popularized the story of a Dutch kid saving a village by putting his finger in a dyke, but that kid is not, as commonly misattributed, the title character Brinker, and Dutch people also don't really know about that story.)

However, it does establish something important: Dutch people were totally skating for prizes in the 1800's. The International Skating Union, which currently governs long track, short track, and figure skating, was founded in 1892 in the Netherlands to govern speed skating, with the first World Championships taking place in Amsterdam in 1893. In 1909, the country contested its first Elfstedentocht, a 100-plus mile tour that visits all the 11 cities of the region of Friesland. It's still held to this day, hypothetically, although the conditions haven't held up for the entire course to freeze to a sufficiently safe level since 1997.

We've since learned how to condition indoor ice rinks, and Olympic speed skating has moved from outside to refrigerated arenas. Hypothetically, the sport can be practiced anywhere on Earth year-round, and not just in winter on Dutch canals.

But the fever is still there. This is Their Thing. But it's one thing to care deeply about something, and it's another thing to win. You can make something your nation's primary point of national pride and still lose, and disastrously so. Seriously, wait for the World Cup.

The Netherlands not only cares deeply and extravagantly about speed skating. It backed its passion up with winning, and in historic fashion.

So, Hup, y'all Dutch fools, or whatever I should say in your language. We'll never experience anything like this, at least until the NFL becomes an Olympic sport.

Oh, also the main reason I wrote this article is because I wanted to drop in this video: