The First 68: On conference title races and the best dunk of the season

A 6'2 guard from Talladega College flew this week. Literally. Kind of.

Share All sharing options for: The First 68: On conference title races and the best dunk of the season

Depending on your conference, it's either the last or the next-to-last weekend of the regular season, which means all sorts of championships will be up for grabs over the course of the next nine days. While the top seed has already been locked up for a number of conference tourneys (thanks for nothing, Stephen F. Austin), there are plenty of leagues which offer 100 percent more intrigue.

That being said, here are the 10 most intriguing regular season conference championship races as we head into the final weekend before postseason basketball begins:

Cincinnati and Louisville are an identical 13-2 with three games to play, and have already split their season series thanks to Russ Smith's heroics in the Queen City last Saturday. The AAC's tiebreaker rules dictate that if the two teams finish with matching records, the tiebreaker will be which team has a better record against the next-best team in the league standings. If U of L and UC have the same record against that team, then you keep going down the standings until someone has an edge. If the Cardinals and Bearcats were to have the same record against all eight other teams in the league, the No. 1 seed for the AAC Tournament would be decided by coin flip. If that were to happen, I think the world would have to petition for a live Rick Pitino coin flip cam.

Suddenly, Virginia owns a game-and-a-half lead on second-place Syracuse, and can lock up an outright conference championship by beating the Orange in Charlottesville on Saturday. It'll be the only meeting between the pair this season, so if Syracuse were to win on Saturday and finish tied with the Cavaliers after next week's action, the Orange would be the No. 1 seed in Greensboro by virtue of the head-to-head tiebreaker.

Mercer and Florida Gulf Coast (Remember those dudes? Dunked a lot? Beat a couple teams they weren't supposed to?... Dunked a lot?) are both 13-4 and three games ahead of the rest of the conference with one game to play. Neither team should have much of an issue capping its regular season with a victory (Mercer plays Jacksonville while FGCU gets Northern Kentucky), which means the regular season title will be split. Like the AAC, the A-Sun's tiebreaker when there is a season series split -- as there is between the Eagles and Bears -- is the best record against the next-best team in the conference. Since there are legitimately four teams that could finish third in the A-Sun, we're not even going to get into that.

Another two-horse race, the first champion of the new Big East will either be conference stalwart Villanova or Missouri Valley transplant Creighton, both of which are 13-2 and a full four games ahead of everyone else. The Wildcats have the unfortunate task of finishing with three bubble teams -- Marquette, Georgetown and Xavier -- that are all desperate for a signature win to push them into the field of 68. Creighton's ending stretch isn't any easier, as it gets the Hoyas and Musketeers on the road, and also hosts a Providence squad that will be just as hungry for a big win as the other three. The Bluejays swept the season series against Villanova by a total of like 3,000 points or something.

Michigan leads the league by a game over Michigan State, and also swept the season series with its in-state rivals. The Wolverines also have a manageable final three-game stretch against Minnesota, Indiana and Illinois. If John Beilein's team does slip up, however, State also has an enviable final eight days against the struggling trio of Illinois, Ohio State and Iowa.

I have a strange fascination with this league that I think can be traced back to my affection for the MTV program "Sorority Life," which took place at UC Davis. Sadly, the Aggies once again are little more than a Big West also-ran, but that doesn't make the race at the top of the conference any less intriguing. UC Irvine, which has never made the NCAA Tournament, currently leads UCSB and Long Beach State by one game with three to play, and doesn't have to play either during the final week of the season.

With two games to play, C-USA finds itself in a situation where four teams -- Southern Mississippi, Louisiana Tech, Middle Tennessee and Tulsa -- are log-jammed at the top with identical 11-3 records. Oh, and there's another (UTEP) just a game behind. The only downside to this madness is that none of these five teams play each other over the course of the regular season's final week. It's all going to come down to the tournament anyway, and C-USA's might be the most competitive in the country.

San Diego State and New Mexico are deadlocked at 13-2, a full four games ahead of third-place UNLV. There's a very real possibility that the regular season finale between the Aztecs and Lobos at The Pit on March 8 will be a de facto conference championship game. CBS Sports Network at 10 p.m. ET. Put a reminder in your phone.

Boston U leads American by a game after knocking off the Eagles on Feb. 19, but in order to win the conference outright, the Terriers will have to win at Holy Cross on Saturday. If that doesn't happen and American takes care of Bucknell, then the teams will finish in a tie at 14-4. The teams split the season series, but American owns the tiebreaker (although no one seems to be willing to divulge what exactly that tiebreaker is) for the all-important No. 1 seed in the Patriot tourney.

Utah Valley leads New Mexico State by a game after Thursday night's events (which included a postgame scrum), and the Wolverines can wrap up the conference title by taking care of the lowly duo of UT-Pan American and Cal State Bakersfield this week. Swear to God all these teams are in the WAC. So are Grand Canyon, Idaho, Seattle and Chicago State. I know. I'm sure there's a joke within the conference's acronym to describe the geographic disparity amongst the league's members, but I just can't seem to find it.

One team that won't have to deal with any final week drama is Kansas, which locked up its 10th straight Big 12 regular season title this week, one of the more remarkable active streaks in college basketball, if not the most remarkable.

Thanks in part to last wins on Thursday night, Arkansas and Oregon enter Chris Dobbertean's Friday bracket update, though they sit right on the edge of the field.

Just two programs have dominated their conference in this fashion before: UCLA, which won the Pac-12 for 13 straight seasons (1967-79), and Gonzaga, which saw its 11-year run atop the West Coast Conference end in 2011. John Wooden was only in Westwood for the first nine of those Bruin championships, which means Bill Self is the first coach from a major conference to win the regular season title for an entire decade.

Self's 2013-14 champions-to-be are a solid reflection of the remarkable dynasty he's been able to orchestrate. The team had to replace all five starters from last season's Big 12 regular season and tournament champions, and its leading returning scorer was Perry Ellis at a mere 5.8 points per game. Now it's a group that clinched a major conference championship on Feb. 24.

I have watched this video of Talladega College guard Snap Peters no less than 15 times, and I still can't get over it.

That's about as close to flying as a human being can get. Also, his name is Snap Peters. Someone get this kid to a major DI program as soon as possible.

Our winless conference watch is now down to just a single dynamic duo in search of imperfection.

TCU (0-15) has probably seen its best chances for a win slide by already, as the Horned Frogs wrap up the regular season at Texas, at West Virginia and at home against Oklahoma. The Thunderbirds (Thunderbirds!) of Southern Utah are losses to North Dakota, Montana and Northern Colorado away from wrapping up an 0-20 campaign in the Big Sky. That would be ... that would be bad.

With a 79-67 win over Sacramento State on Thursday, Weber State set a new Big Sky record by winning its 27th straight conference game at home. The Wildcats, who have lost in the Big Sky championship game three of the past four years, might be the most dominant mid-to-low major to not make the field of 68 over the past few years. They went 33-2 against Big Sky teams not named Montana the past two years, and they've made the NIT, CBI or CIT in each of the past five seasons. Still, this is a team that hasn't cracked the field of 68 since 2007.

This looks like it has to be the year for Weber, which sits in first place by three games with three left to play. The Wildcats can lock up an outright Big Sky title by beating Northern Arizona on Saturday, or by having North Dakota and Northern Colorado both lose.

The national scoring race is still very much undecided heading into the final week of the regular season:

Our quote of the week comes from Louisville freshman guard Terry Rozier, who completed his 15th game without a turnover on Thursday night against Temple. Not a bad statistic for a freshman point guard.

It's not a single quote, but this entire exchange with a Louisville Courier-Journal reporter about Rozier's fear of squirrels will probably be the best thing you read this week.

Jeff Greer: I read that you're scared of squirrels.

JG: Like, the albino squirrel around (Louisville's) campus, or all squirrels?

TR: Any squirrel. I almost got attacked by one when I was little.

TR: They're too sneaky to me. I had a hoop in the backyard and the lady that lived next door had bird food out of (a bird feeder). All of the squirrels would be over there just to eat the bird food. I never used to go out to my backyard to go hoop when there were a lot of them back there. When it broke, she took it down and it was just like, ‘Yes, I can finally go in my backyard and hoop because no more squirrels will come around.' They're just sneaky to me.JG: Attacked?

JG: So you just don't trust them?

JG: Have you seen the video of Eric Berry, the safety on the (Kansas City) Chiefs? He's really afraid of horses.

JG: Well, the Chiefs, their mascot (Warpaint) is a horse. At the beginning of the games, they have the cheerleaders all lined up and the horse runs out. (Berry) is what, 6-feet, 210 pounds, and he hides from the horse. You need to see the video. You've got to Google that.

TR: I don't like squirrels. I'm not a squirrel guy.

I've never liked the way they look at me. They're up to something. It's just a matter of time. Rozier's concerns are not misplaced. 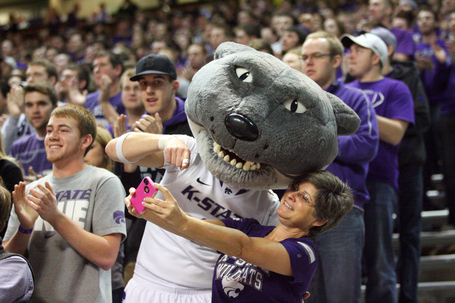 It's not even looking into the camera for the selfie, it's just looking straight into all of our souls ... and pointing.