The Seahawks win the Super Bowl: Deserve had nothing to do with it

Like everyone else in sports, the Seahawks don't deserve anything. So instead of waiting, they just took what they wanted.

Share All sharing options for: The Seahawks win the Super Bowl: Deserve had nothing to do with it

1. Here is everything you need to know about sports: nobody deserves anything.

Keep this in mind when you read about the travails of long-suffering Seattle fans, or a Seahawks franchise that was almost moved to Los Angeles before Paul Allen bought the team in the late '90s. If there were justice in sports, the Yankees and Cardinals wouldn't have a third of all World Series victories, the Browns never would have left Cleveland, and Michael Irvin would have faced some kind of repercussion for stabbing his teammate in the neck with scissors.

Championships are earned or bought or stolen, but never deserved. Make no mistake: the Seahawks didn't win the Super Bowl because of Ken Griffey Jr. or the Sonics. They won because they had the gall to fire coach Jim Mora after a single season in order to hire Pete Carroll, who was never supposed to work in the NFL again after failed stints with the Jets and Patriots in the '90s.

They won because Carroll teamed with a new general manager, John Schneider, and promptly drafted a slew of cheap young talent that won a championship on their rookie contracts. They traded for a franchise running back, signed key free agents to make the defensive line as fearsome as the secondary, and drafted a too-short franchise quarterback in the third round of the NFL draft.

They won because Carroll is the kind of coach that no Seattle team has ever had. His "always compete" philosophy granted Russell Wilson a chance to start in his rookie year over Matt Flynn, even though the Seahawks had just given Flynn a $10 million contract to be their starter. It's no accident that Carroll, a former defensive back and defensive backs coach, has built the deepest and most fundamentally sound secondary in all of football. That he is just the third coach with both college and Super Bowl titles is also no accident. In time, this excellent young Seahawks team will prove him more a Jimmy Johnson than a Barry Switzer.

This is how the Seahawks' clinical, all-phases destruction of the AFC's top seed happened: not with the karma of long-suffering fans, but with a phenomenal assembly of talent, excellent coaching, and superior preparation and execution.

2. But while we're here, let's visit the psyche of a Seattle fan prior to Super Bowl XLVIII. Let's take a fan born at Fort Lewis, an hour south of Seattle, in 1978 -- he is younger than the Seahawks by two years, and was still an infant when the SuperSonics won the city's only major pro sports championship. A Seattle fan born then has lived through:

Those are merely the highlights of misery; there are full chapters that can be written about the top draft picks spent on Dan McGwire and Rick Mirer or the years wasting the talents of Felix Hernandez and Cortez Kennedy. The net result of these decades of failure -- across not one but several sports -- is an expectation of collapse. Last year's playoff loss in Atlanta felt scripted right down to the last-second field goal -- less heartbreak than a terminal malady.

Why the NFL always wins

Is Pete Carroll going to change the NFL with the world champion Seattle Seahawks? Steven Godfrey went to New Jersey, and found a coach and a team content to enjoy their moment.

The L.O.B. asserts itself once again

The Legion of Boom isn't just a name. For the Seahawks, it's a mentality that seeps into every facet of the game. On Sunday, in the Super Bowl, the LOB painted its masterpiece.

Why the NFL always wins The L.O.B. asserts itself once again

3. Something changed over the last two weeks. After a hard-fought and gruesomely violent victory over the 49ers -- the hottest team in the NFL and a popular choice to upset the Seahawks leading into the NFC Championship -- I felt confident that the Seahawks would win the Super Bowl, and I thought it was an obvious enough conclusion that I was surprised Vegas tapped the Broncos as the favorites.

Who were these people picking the Broncos? Did they not see the Seahawks beat superior competition in the NFC bracket? How could they expect Russell Wilson's alleged struggles to continue against a team without an elite pass rusher? How could they not give more credence to the best defense in football? I collected names, wrote off experts, held grudges.

Still, because of Seattle's history, a part of my brain held on to the terror that everything would go wrong. The top-ranked '05 Seahawks managed to lose to a 6-seed Steelers. The '01 Mariners won 116 games and missed the World Series. The '93-'94 Sonics won 63 games but lost in the first round of the playoffs. Shit happens. It made sense to accept the possibility that the greatest quarterback in NFL history could defeat my stupid team.

4. Grown men are supposed to weep when their woebegone franchises finally win championships, but those tears only come after three or four hours of in-game doubt and suffering. Emotions are different in an ass-kicking: the losers accept their fate sooner, and the champions' joy is spread out over the course of the game, rather than concentrated at the end.

This was Super Bowl XLVIII: I leaped in joy at the opening safety, at Percy Harvin's 30-yard jet sweep to set up the first field goal, and at Kam Chancellor's interception (the first of four Bronco turnovers). I ran around the room on the touchdown returns by Malcolm Smith and Percy Harvin. By the time Jermaine Kearse and Doug Baldwin caught touchdowns, I was cackling like a Bond villain.

And @mattufford has reached an emotional level of "Depraved Kidnapper."

It was a goddamn bloodbath. Disinterested parties may think this a bad thing, but no: the blood of your enemies is warm and relaxing, and extra restorative thanks to Peyton Manning's stem cell treatments. I recommend it to anyone watching a Super Bowl. 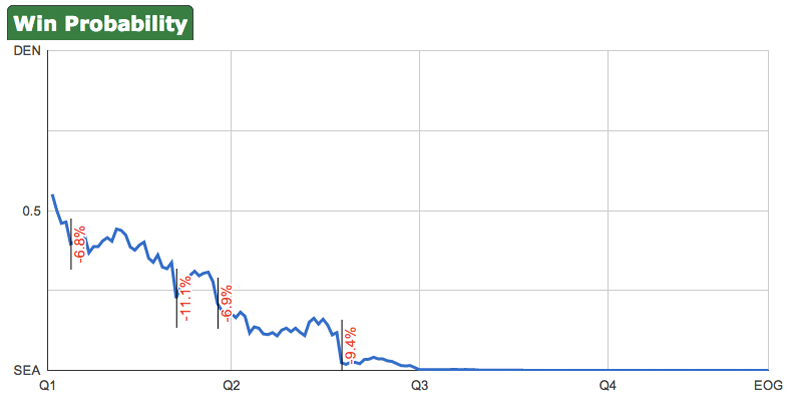 However, because the slaughter was so systematic and thoroughly certain, it's tempting to lament the lack of drama in a city ending its 35-year championship drought in such clinical fashion, as if the key to winning a championship is as simple as remembering to turn the industrial buzzsaw on. After three and a half decades of disappointment and heartbreak, I expected the first championship I ever saw to bring me to my knees. Not at all: I've never stood taller.

And it may not be deserved, but it certainly feels that way.