Hey y'all got y'alls' asses whooped

It's fun when teams get their asses whooped. This is a presentation of data meant for football fans who are wondering whether or not the Broncos lost the Super Bowl.

Share All sharing options for: Hey y'all got y'alls' asses whooped

I'm about to talk about how bad the Broncos got their asses just totally whooped. But before I do, I want to let y'all know that even though I get into some nerdy stats shit, I ain't a nerd. I am actually really cool, and spent last night hanging out with a lot of my friends and drinking some beer. I just know how to do nerd shit because I'm smart.

I couldn't even believe how bad the Broncos got whooped by the Seahawks. When I was little, teams in the Super Bowl would whoop up on fools like every other year, and I'd just stop paying attention halfway through to build cool stuff out of Legos. (I made a guitar once that was as big as a real guitar.) But anyways, every Super Bowl over the last 10 years or so has been kind of close, and a lot of them were really really close. 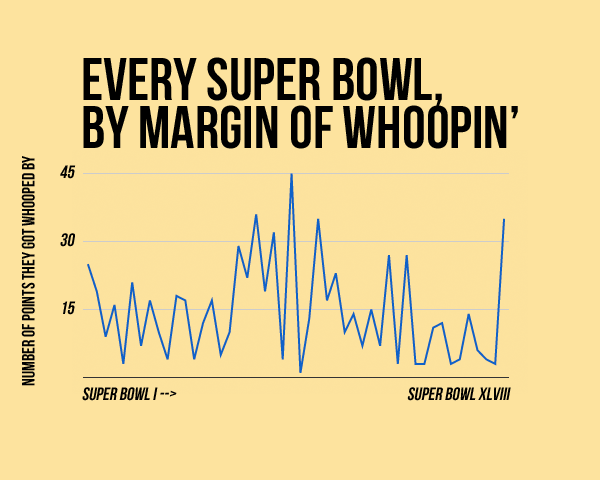 Here's some of that nerd shit I was talking about: Simple Ratings System (SRS) is a rating they have at Pro-Football-Reference. Basically, it estimates how good a team really is. An SRS of zero would mean your team is average compared to the rest of the league, and higher is better.

The Broncos' SRS this season was 11.7. According to that, they're the seventh-best team to lose a Super Bowl. But this isn't really just about them losing. What's crazy is how good they were supposed to be and how bad they got their asses kicked. 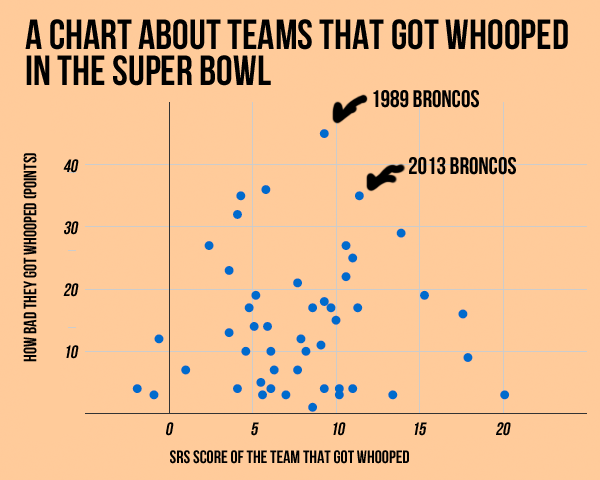 It's nuts that a team that good got busted up by so many points. I also labeled the 1989 Broncos team there because they also were supposed to be good and got stomped, and they were a Broncos team too.

Y'all look at all those dots on the left. Those teams were supposed to be shitty and not have a chance, but they actually played pretty good and almost won. And like, all the way on the right there's the 2007 Patriots, who had this crazy good SRS, and even though they lost, it was still really close. The Broncos are way different than those teams, though, because they were supposed to be good AND they lost 43-8 like a bunch of baby children.

Pro-Football-Reference got this other thing called Offensive Simple Ratings System (OSRS). Same deal, only it's just about rating a team's offense. This year the Broncos had an OSRS of --

Hey seriously I am not a nerd. I mostly use my computer to watch sports and listen to rap.

Anyways, this year the Broncos had an OSRS of 14.1. That's seriously the second-best offense in NFL history since they started playing Super Bowls. But another thing that's crazy is that almost no offense anywhere near as good as the Broncos' offense has been so crappy at scoring in a single game. 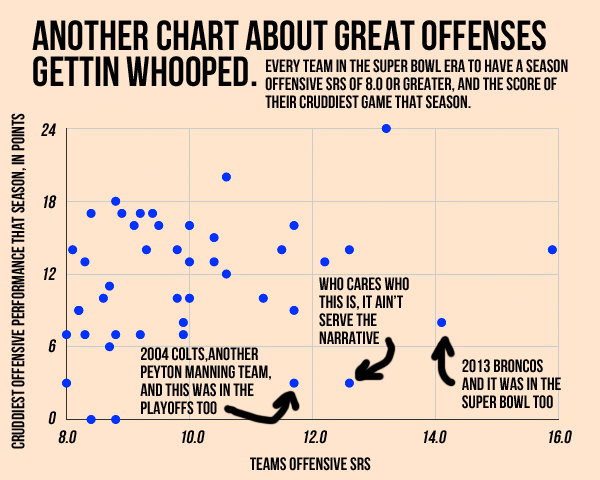 Y'all, they were straight-up crap on offense. Like the worst crapshit ever. And most of those other dots you see are for games in the regular season. A lot of times they were games late in the season, when they were already in the playoffs and nobody really cared.

But the Super Bowl is obviously the biggest possible game. There are people in England and India and places like that who are watching. Plus if you count all the people in America who watched it, it's probably hundreds of millions of people.

I don't know why the Broncos picked that game to totally shit the bed but whatever, I don't really want to tell anyone else what to do. You want to get your ass clobbered when like Nas and Randy Travis and Barack Obama are all watching, more power to you. It's stupid though.

What's another thing that's crazy is that the Broncos started sucking ass right away. Like there was that safety really early on, and they just kept getting whooped after that.

Another stat they got is "Win Probability." They use computers to figure out the percentage chance that a team's gonna win. Before the first quarter, the Broncos' win probability went below 25 percent, and it just got smaller and smaller after that. They got their asses totally destroyed. That shit's only happened like that in six Super Bowls, ever. 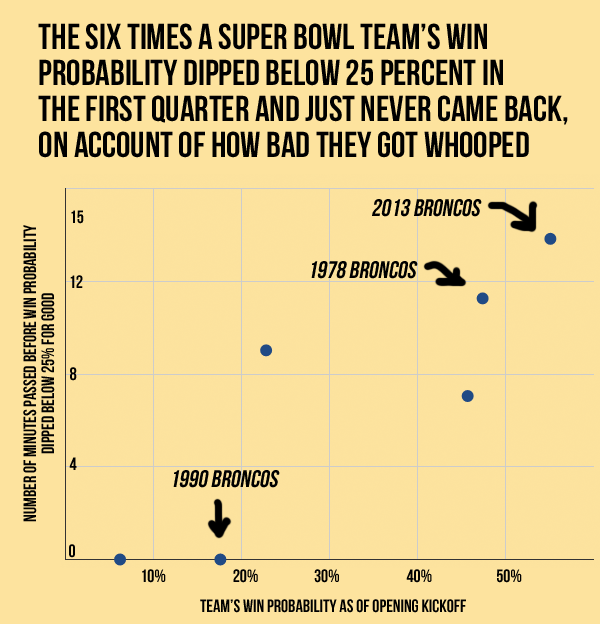 The Broncos never really had a chance at all, and they got completely stomped. What a bunch of assholes.