Jon's dispatches from Sochi, a place he is not at

It seems like there are more and more Olympic host cities each and every year. But Sochi, the host of this year's Winter Games, was clearly unprepared. Here is Jon's report from Sochi. He is not there and these photos are fake.

Share All sharing options for: Jon's dispatches from Sochi, a place he is not at

When I received the assignment to head to Sochi, I knew which questions I wanted to ask.

But soon after I landed in Sochi, it became clear: I would be writing a different story entirely. You've surely seen tweets from my fellow journalists that document the city's ill-preparedness, poor infrastructure, and deficiencies ranging from food sanitation to unfinished restrooms.

The Best Olympics: How to integrate Horses into the Games

Now, I will tell my story. I am not there and this is a fake story.

My hotel room is woefully furnished. A lot of folks are stuck in rooms in which nothing comes out of the faucets, so I suppose I should count myself as one of the lucky ones. But when I turned on my bathroom faucet, a bunch of DVDs of shitty movies from 2001 came out. 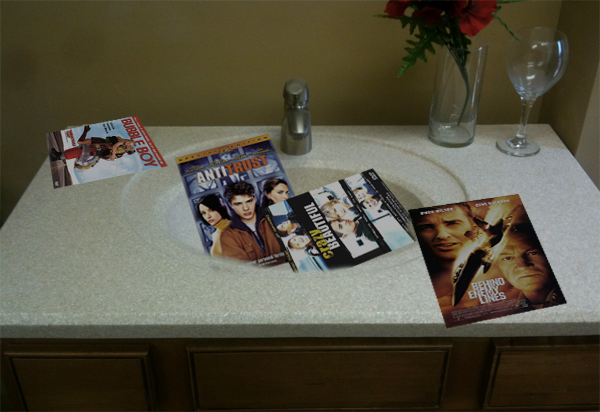 The first DVD to pour into my glass was Owen Wilson's contemporary war thriller, Behind Enemy Lines. I held the glass up to the light, and I could see a horribly miscast film. It was such an odd career turn for Wilson, who up to that point had straddled the line between forgettable big-budget comedies such as The Cable Guy and Shanghai Noon, and more well-received films like Bottle Rocket and Rushmore. And suddenly, here he was, a straight-laced naval flight officer. There was no way I was drinking it.

Once I left the faucet on for a while, it began to warm up to crappy movies from 2002. By the time The Banger Sisters came out, I decided I'd be drinking bottled water throughout my stay.

The toilet paper situation was untenable. I would have packed my own, had I known about this debacle beforehand. This sign was crudely taped to the bathroom door: 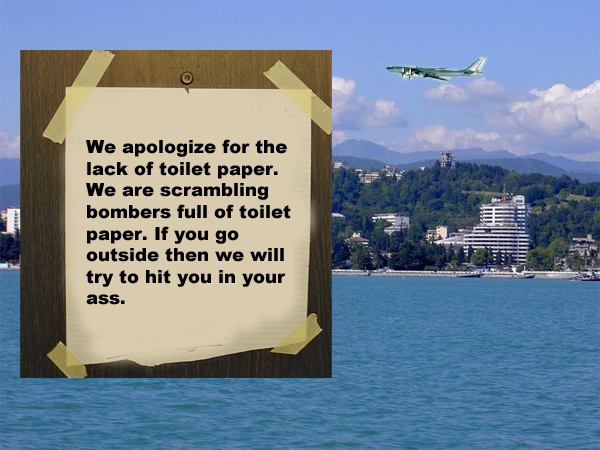 They weren't even dropping toilet paper rolls out of the plane. They just tore out three-square strips and dropped them out of the cargo hold. What are the odds that any of them would hit me in the butt? Nevermind that, why would I want to be out there without my pants on? And how would such a weightless object achieve the velocity necessary to wipe my butt with any degree of effectiveness? What's more, everything in this article is made up and not true. It was completely absurd.

I was so appalled by the bathroom situation that I failed to even notice that I didn't have any bedsheets on my mattress. On the wall, they had posted yet another hastily-written sign:

We apologize, but there are no bedsheets available. Instead, we have furnished your bed with the guy from Independence Day who says "oh my god. Oh my gooohhhhhhhd, I gotta call my brothah, my housekeepah, my lawyah ... ah fahget my lawyah." Please forgive this inconvenience.

There he was, just lying there in lieu of a comforter. 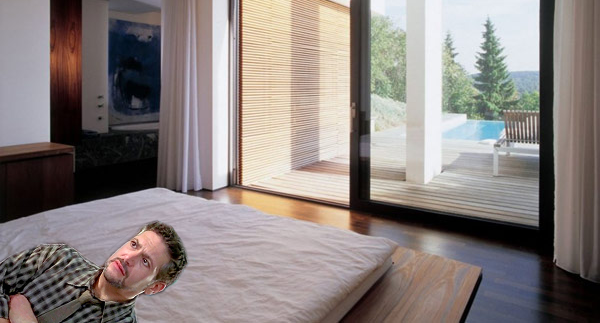 He didn't say anything. He just sort of lied there. That was just as well, because I never understood why he was in the film to begin with. He just listened to Jeff Goldblum talk about the aliens, made a lawyer joke that was vastly inappropriate for the situation, got stuck in traffic, and died. Welcome to Sochi, I guess.

I'm only able to write this article you're enjoying because I happened to get in touch with a colleague who had fully-functioning Internet access. Curiously enough, my wall had three network jacks installed, but each one would only allow me to transmit one type of data. 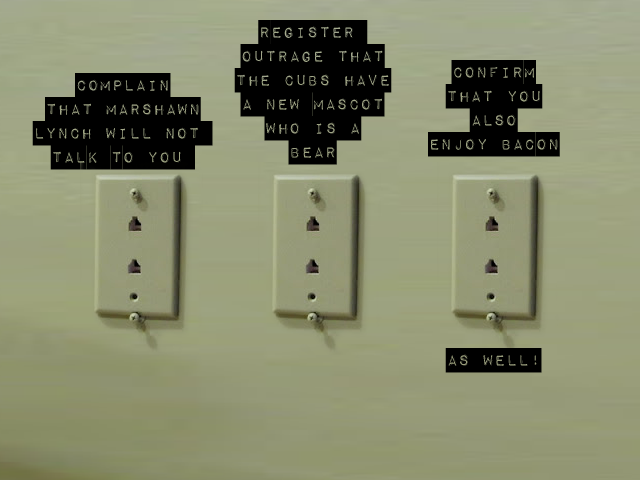 As a sports journalist, this admittedly serves nearly all of my needs, and I expect to be able to write the remainder of my dispatches from the comfort of my hotel room. But to say the least, it's a hassle to have to unplug my network cable and re-connect it every time I want to segue from scolding Marshawn Lynch to telling people I am on #TeamBacon. Who the Hell designed this network? McKayla Maroney is NOT impressed.

But as I said, I was relatively lucky. At least my hotel was ... well, a hotel. Many of my sportswriting colleagues came to check into their hotel, only to find that it was an enormous rock. 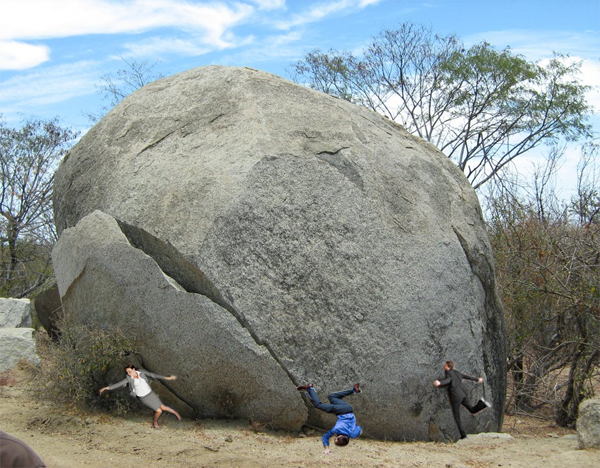 They kept trying to walk into it, but then they'd run into the rock and fall over. Then they'd get up and try to enter the hotel again, but just fall over again, because the hotel was a huge rock.

I had to try this for myself. I walked into the hotel. Suddenly, my face smacked against something hard. It was this huge rock. The whole hotel was just a rock!

So I turned around, and from farther away this time, I tried to enter the hotel. Step, step, step ... bang. I ran right into this enormous rock with such force that I lost my footing and fell over. What the Hell? 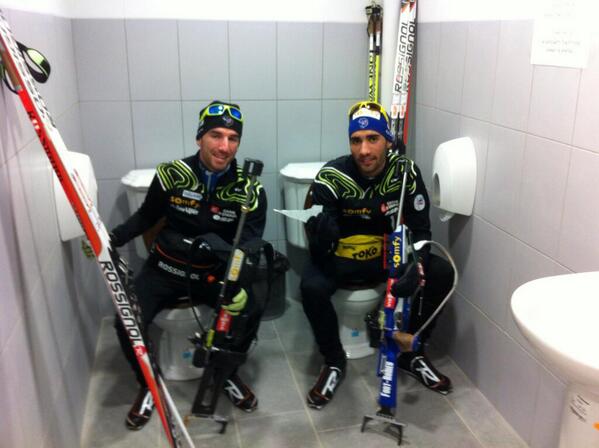 I pulled myself to my feet and dusted myself off again. Surely this wasn't happening. I walked into the rock just a little harder. No dice. I hit this big rock that was just sitting there, and winced in pain as I bounced off its face and fell to the ground.

As I rose to my feet, I spotted a colleague of mine. "Hello, Jon!" she said. "I'm going to check into my hotel now, but I'm looking forward to covering the Opening Ceremonies." As she tried to enter the hotel lobby, she had a surprise waiting for her: it was not a hotel, but rather, just a massive rock.

"Ow! Jeez!" She staggered away upon running into it. "Okay, I really need to get some rest." She turned around and tried to enter the hotel again. Smack. Nothing but a giant rock.

"Hold on," I said. "I've got to check this out for myself. I'll head into the lobby and see if I can flag down a concierge, see what the Hell is going on here." As I reached to grab the handle of the door to enter the front lobby, there wasn't a handle or door. Since my hand was stuck out, it was the part of my body that hit the rock first. Then my face and chest kind of both hit it at the same time after that. I attempted to keep walking into the hotel, but there was no space left to do so, since my person was pressed flush against a gigantic rock.

Follow Jon's adventures in Sochi by logging into a site.

• The best photos from Day 1 in Sochi

• The Flawless Sochi Olympics | Russia is spying on hotel showers