An open letter to Steve Nash

Steve Nash is one day from his 40th birthday and has been struggling with back injuries. Despite this, one Nash acquaintance pleads for him to keep playing and defying Father Time.

Share All sharing options for: An open letter to Steve Nash

First off, welcome back to NBA game action. I know it's been a while, so please enjoy every second you get out on the floor. This doesn't last forever. That time competing alongside your teammates, there really is nothing like it.

I'm writing to you today to ask you a favor. Please don't retire.

I know, many people are pleading for the exact opposite. They think you are too banged up and too old. They don't want to see the maestro reduced to an understudy. They want to remember you at the top of your Phoenix "Seven Seconds or Less" powers. But I think those people are missing your true basketball essence.

I'm writing to you today to ask you a favor. Please don't retire.

Selfishly, I have the exact opposite viewpoint as them. To me, you can still make a valuable contribution. To me, watching your desire to defy both debilitating injury and Father Time is inspiring. I know you've always been a process guy, and the sheer joy of watching you interact with your (much younger) teammates is enough for me to want more. More endless high-fives, as it were.

If I have to be honest, the most important reason you need to keep playing is my NBA dream dies if you're not playing. Goofy, I know. I'm really old and probably won't be getting much of a look as I approach senior citizen status. That doesn't matter.

You're the local kid who became a two-time MVP. Every time you hit a pull-up three, that is me hitting a pull-up three. Every time you make a perfect slot pass on the pick-and-roll, that is me making that same pass. Not to get existentially crazy on you, but I'm pretty sure there are people in Vancouver and across the province who are "you" every single time you take the court. Identity is a really fuzzy concept sometimes.

I still vividly recall the first time I saw you play. It was actually the day that I first played against you. You were 17 years old and a member of the BC Under-17 team, coached by my brother Paul and the grumpy legend, Rich Goulet. I usually organized a team of ex-university players in the Vancouver area to take on the young select team before they headed off to their American AAU tournaments. Bigger, faster, stronger and more experienced guys who could simulate what playing against U.S. competition would be like for the local boys. Basically, beat up on the teenagers and humble them before they got on the plane to Las Vegas.

Paul told me that you were a special player, like no one he had seen before at the high school level in BC. We rolled into the gym preparing to crush you kids and barely squeaked out a victory. I'm not sure our collection of older and more talented players really taught the youngsters anything that day. But you taught us something: that you were very, very, very good.

Fast forward eight months to the BC high school championships. My brother begged me to come out and watch some games. "Remember that kid from the summer? You've got to come and watch him play again. He's absolutely amazing." Your St. Michaels University School team breezed through the tournament and you were named MVP. More importantly to me, you played with joy and were a joy to watch out on the floor.

The mental toughness. The delight at seeing your teammates succeed. The wonder of imagining what the empty spaces on the maple floor would produce if you only explored them. Those qualities were there as an 18-year-old high school player and continue to be apparent as you approach your 40th birthday on Friday.

I've had the good fortune to watch you play in high school, college, the NBA and at the Olympics. Those 2000 Olympics in Sydney are still special to me. Yes, they were a coming-out party for you as a player, but they were also the moment that crystallized the qualities that made you so fun to watch. Those qualities that you can still bring to an NBA floor.

Steve, I've taken enough of your time. Happy birthday and I hope you and your family are well. I know it's unbelievably selfish of me to ask but please, keep playing. The Hall of Fame can wait a few extra minutes before you make your appearance.

Enjoy every moment, one game at a time, because I'll be enjoying them too. 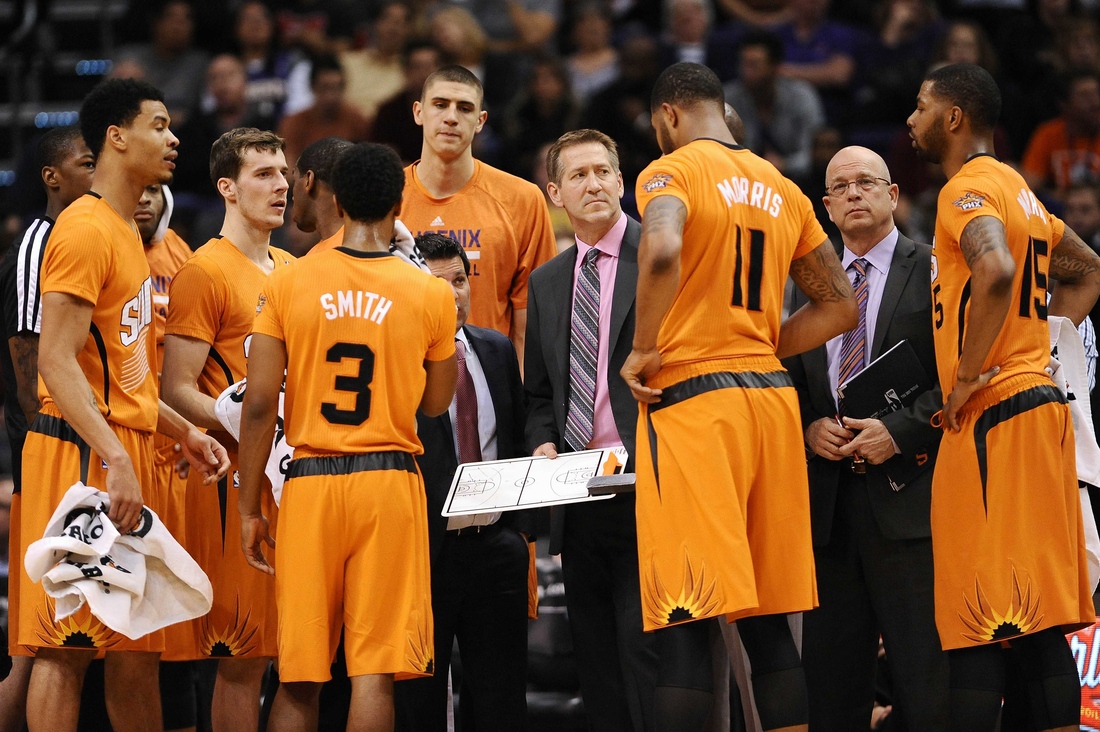 The Phoenix Suns are the feel-good story of the NBA season. With a young group of what were thought to be complementary players, the Suns were expected to be in full tankapalooza mode. A new coach, a new GM and a bushel full of draft picks get people thinking that way.

Lo and behold, these rising Suns can play, and the new head man, Jeff Hornacek, can really coach. The former Phoenix and Utah guard has a defined offensive philosophy that has produced the same fast-paced O that the "Seven Seconds or Less" Suns ushered into the NBA 10 seasons ago. 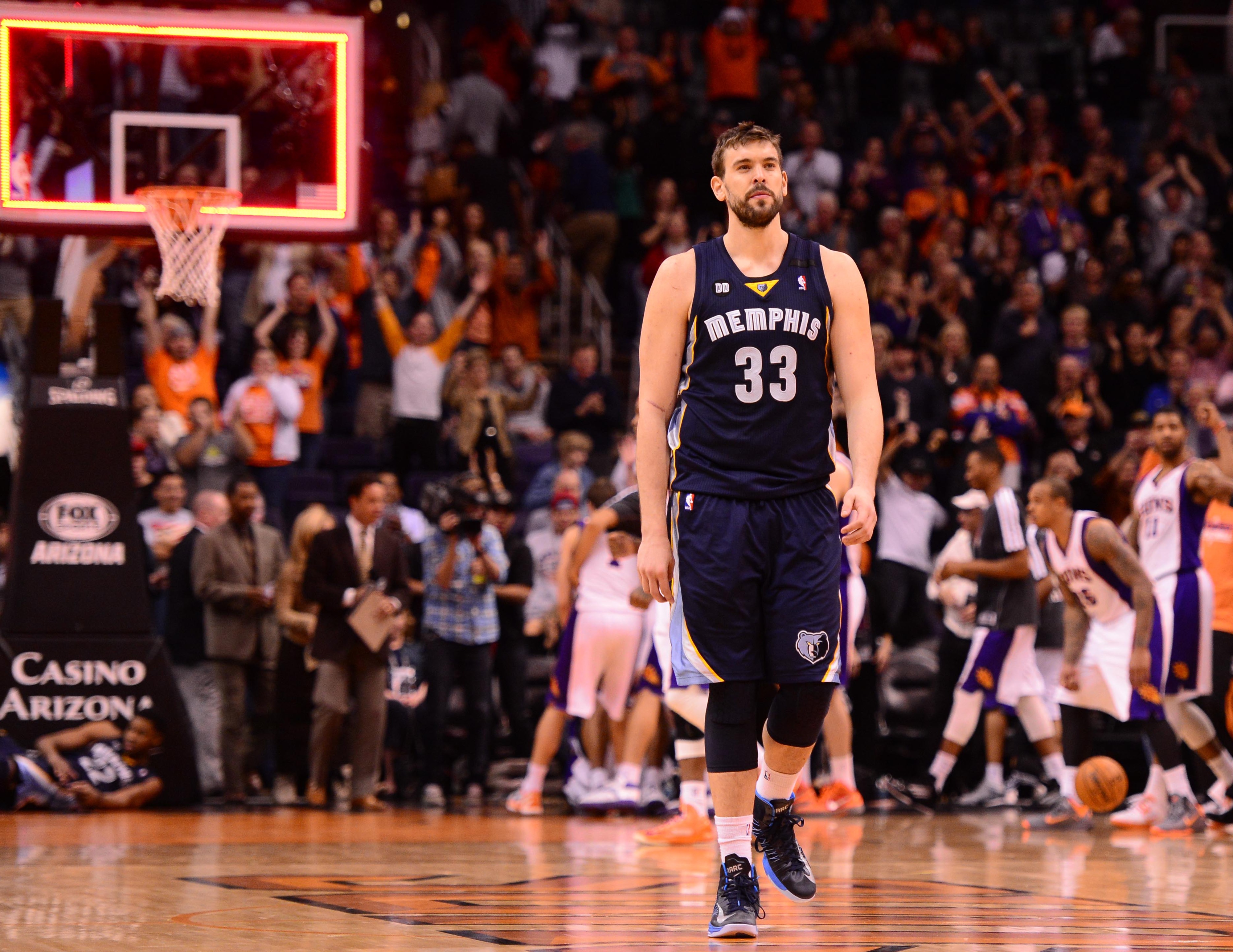 The Grizzlies have won six games in a row and look very much like the team that won 56 games last season and reached the Western Conference Finals.

Hornacek has also brought a flair for after-timeout actions that use both the three-point line and the elbow areas, two regions where the Suns have the personnel to both execute and excel. Hornacek is also adept at recognizing mismatches. Now, mismatches are not always just the traditional player with the ball and the defender who is unable to handle that offensive star. Oftentimes, the mismatch is the result of how the D is playing a particular action. How are they playing the pick-and-roll? How are they playing off-ball screens? Are they switching? Is there any personal interaction (or animosity) that we can exploit on one of our offensive sets?

Consider this sequence against the Indiana Pacers. Coming out of the under-three-minute timeout, the Pacers work a basic half-court action to get Roy Hibbert the ball just outside the left block. Markieff Morris and Hibbert proceed to bash each other like the tallest sumo wrestlers in the Hoosier dohyo. (That's the ring for you non-sumo fans.)

Morris finally tries to pull the chair out from underneath the big 7-footer, but is called for a blocking foul. Hibbert, angry, heads to the foul line for two shots.

What, you ask, does this Indiana possession have to do with a Phoenix ATO of the Week? The Indy possession provides some necessary background that is crucial in determining why Phoenix's ATO sequel is successful. The Godfather leading to The Godfather Part II, essentially.

Following Hibbert's second made free throw, Leandro Barbosa brings the ball into the frontcourt while being covered by George Hill. As the Brazilian Blur dribbles towards the right side of the floor, Channing Frye, marked by Luis Scola, sets up in the right-side slot at the three-point line. Down on the opposite side low block, the heavyweight tag team known as the Morris twins are setting a little double screen for the not-so-dainty P.J. Tucker, defended by Paul George. Marcus Morris draws Danny Granger and Markieff resumes his battle with Mr. Hibbert. 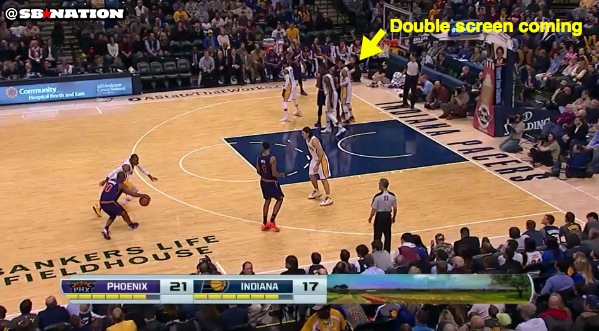 To begin the play, Tucker cuts over the top of a little -- or in this case, not so little -- "bunch" screen by the Morris twins. Tucker's cut is SLOOOOW and he curls back just as slowly when he reaches the restricted area circle. 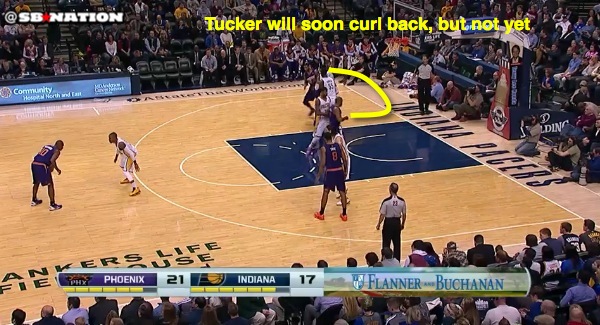 After the double screen, Marcus Morris brushes off his brother and pops to the elbow, where he receives a pass from Barbosa. As Leandro makes the pass, Frye sets up a flare screen for Barbosa. Scola adjusts accordingly, allowing space and preparing to help George Hill, if necessary, by showing on a potential pass from Marcus. 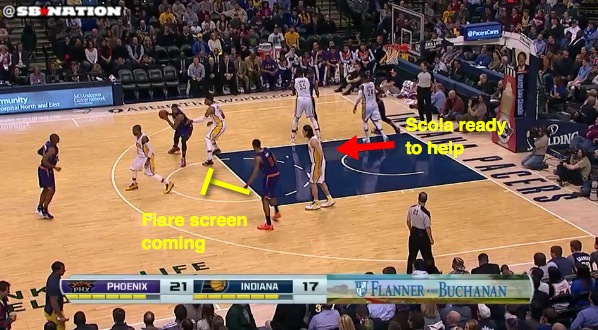 In our nonlinear story arc (The Godfather Part II), we return to the Markieff Morris/Hibbert matchup. After bashing each other on the previous possession, Hibbert has decided that now is the time to get personal with Markieff. Roy is bodying up and completely attached to Markieff on the low block, leaning on him and trying to show his physical dominance.

But unfortunately for Hibbert, playing the tough guy on defense makes the whole ATO possible for Phoenix, as we'll see shortly.

At this point, Marcus Morris is getting ready to front pivot off of his catch at the elbow. Granger is in good defensive position, although his hands are at waist level and in no position to properly contest a pass. Tucker has begun a second curl, heading back out and off of Markieff Morris' low screen. George is properly trying to lock onto Tucker's hip and trail the small forward off of the next Morris screen.

But because Hibbert is still bodying Markieff, he has not left a way between the screen for George or a soft spot for himself to show in the key. Ironic, since Roy usually lives in the key for his 2.9 seconds or much, much longer. 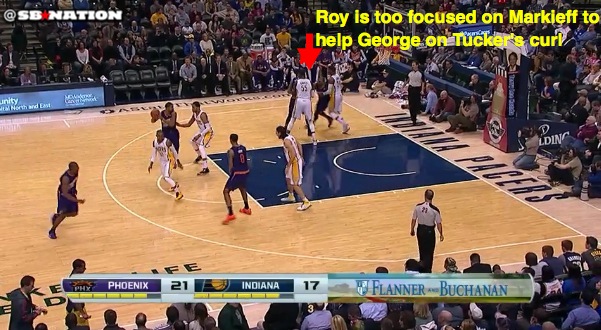 To properly play this action, Hibbert needs to create a little breathing room between himself and Markieff Morris. That would allow Roy to at least "arm show" if Tucker pops out off of the screen or bump or "touch off" Tucker until George can catch up. That would also put Roy in a position to be on top of Markieff if he ducks in for a hi/lo action between the brothers. 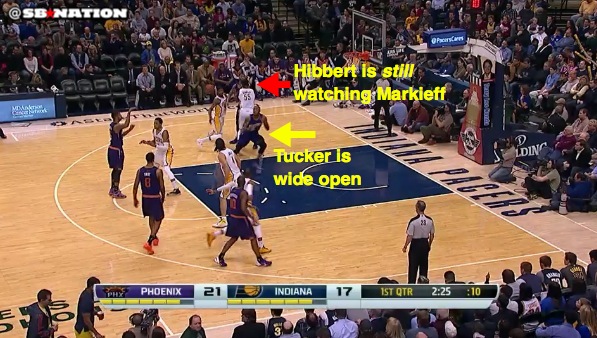 Tucker simply makes a hard re-curl off the Markieff low screen. George is trailing, but Hibbert is still attached to Markieff like white on rice.

This was excellent recognition by Hornacek, whether he noticed during the previous timeout or a result of the wrestling match that broke out during Indiana's possession. There's no debate that's the "ATO of the Week."

But this does bring up the age-old movie debate. Which award-winning movie is superior: The Godfather or The Godfather Part II? I guess that debate will wait for a future column.

• The Hook: Adam Silver thinks the NBA should rival the NFL

• Flannery: How far can John Wall carry the Wizards?

• Lakers vs. Cavs was the most bizarre game of the season