It shouldn't take an unfortunate incident to spark a conversation on a topic that should have been addressed years ago.

Share All sharing options for: What if Marcus Smart hadn't shoved Jeff Orr?

We still don't know what Texas Tech fan Jeff Orr said to Marcus Smart that prompted the Oklahoma State guard to shove him near the end of the Red Raiders' upset on Saturday night. There's a strong chance that we will never know.

A season down the drain 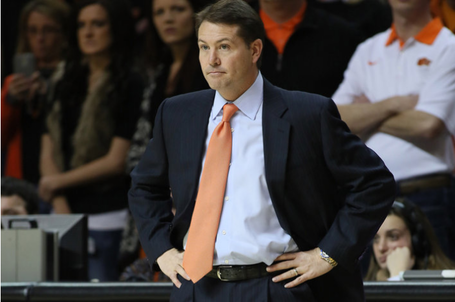 A once promising season has fallen off track. Robert Whetsell at Cowboys Ride For Free says Marcus Smart and head coach Travis Ford are to blame.

Smart, according to The Oklahoman, was telling everyone on the court in the moments immediately following the incident that Orr had used a racial slur. That racial slur. Orr said in a statement he called Smart a "piece of crap," and denied using a racial slur.

Assumptions are always dangerous in situations as sensitive as this, so for now let's stick with what we know for certain about Orr. An air traffic controller from Waco, Texas, Orr was profiled as Texas Tech's "No. 1 fan" by the university back in 2010. The school even did a video piece to go along with their story, which chronicled how Orr travels about 32,000 miles a year to watch Red Raider basketball and football.

In that same year, ESPN's cameras captured Orr making an obscene gesture to Texas A&M's Bryan Davis after Davis had dunked inside the United Spirit Arena.

Photo of Jeff Orr from a few years ago at a Tech-A&M game. pic.twitter.com/kjRpjMJOdV

The only official statements from Texas Tech so far regarding the incident have come from athletic department spokesman Blayne Beal, who defended Orr during an interview with ESPN.

"We have never had an issue with [Orr] crossing the line in the past," Beal told ESPN.

And about that gesture during the A&M game? 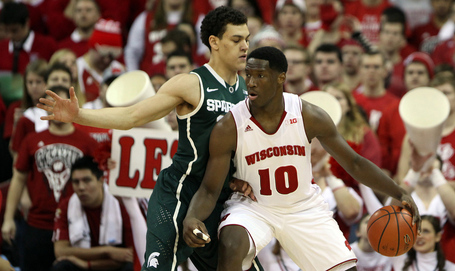 Wisconsin upset Michigan State in a final-minute thriller. Get caught up with more scores from around the country.

"We are not endorsing that gesture from the Texas A&M game," Beal said. "It just did not rise up to be any kind of issue."

So because Bryan Davis didn't go into the crowd and push Orr, everything was cool? That seems an awful lot like condoning a drunk driving expedition that ends without any twisted metal or significant injuries.

This is not a defense of Smart. Regardless of what was said or how frustrated you were before that point, no player -- whether it's an All-American like Smart or the last kid off the bench for Cornell -- can let themselves get taken to that dangerous place. Smart is going to be suspended, and he deserves to be.

Still, what took place Saturday night has opened the doors for a conversation that has needed to happen for years now.

There is no other walk of life in which Jeff Orr, a grown man, would ever hurl an insult in the direction of Marcus Smart, a 19-year-old, when Smart was within earshot of him. It's like the spoiled 15-year-old kid who shouts obscenities or throws pencils at his teachers knowing they can't legally do anything in response, only the exact opposite, which makes it about 50 times more ridiculous.

There have already been a hoard of "he's going to hear a lot worse when he gets to the NBA" sentiments expressed over the past 18 hours, and those people may be right. If they are, the thought of a superior bank account will probably be enough to push the instantaneous thought of womping on a dude who wouldn't dare say anything if the two saw each other three hours later out of Smart's mind pretty quickly.

The Smart situation is destined to become largely about race because of what was allegedly said, but I hope that doesn't wind up completely overshadowing the issue of fan behavior and player safety.

For example, look at the fairly disturbing photos of an Arkansas fan squaring up to fight Kentucky's Aaron Harrison after fans had stormed the court to celebrate the Razorbacks' upset win over the Wildcats last month. Another instance of an issue that thankfully "did not rise up," but still needed the attention it would have received had Harrison or the young man wound up doing something more.

It was terrifying Saturday night to see Texas Tech fans storm a court still occupied by an opposing player who had just shoved one of their fans; some of them had just hurled debris at Smart. It shouldn't take an incident like the one people were envisioning at that moment, or the one that "rose up and became an issue" minutes earlier, to spark a conversation about making sure that 18-23 year olds feel safe playing a game.

• Tubby Smith, Texas Tech and the power of ball movement