The postseason was supposed to give college hoops experts a temporary reprieve from the season-long trend of being horribly, horribly wrong about everything. It has not.

Share All sharing options for: College basketball's postseason continues to prove that none of us know anything

Here's what you need to know about all those words that are already starting to fly in your direction at an increasingly furious pace: they're being written by people who don't know what the hell they're talking about. These people, myself included, are all well-intentioned, they all want to be right about the last few weeks of the college basketball season, but they're not going to be. If you want proof of this, all you have to do is look at the preceding four months. 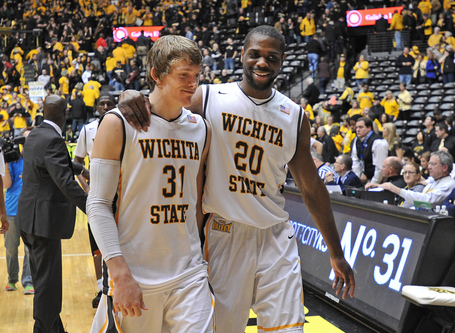 Everyone was wrong about Kentucky. There are people out there right now who are thumping their chests over the fact that they didn't have the Wildcats in their preseason top five. Those people were still really, really wrong about Kentucky, they just earned the right to have one less "really" placed in front of the word "wrong" than the people who picked John Calipari's team No. 1 get.

Despite losing the bulk of a team that fell in the first round of the NIT last season, Kentucky was picked as the preseason favorite to win the national title by both major polls thanks mostly to a recruiting class that was described as "the best ever" by more than a few folks who make a living doing this sort of thing. On Monday, the Wildcats became just the fourth team ever and the first since Indiana in 1980 to go from preseason No. 1 in the Associated Press Top 25 to out of the poll completely.

So yeah, we were wrong.

People have already started shifting the blame to the world of recruiting for the misevaluations of UK, so let's move on to the other team that received a healthy dose of preseason No. 1 love.

While there was at least some risk inherent in vouching for Kentucky heading into the year, Michigan State was supposed to be a sure thing. The Spartans returned every major contributor from last season's Sweet 16 squad, including All-American candidates Adreian Payne and Gary Harris, both of whom could have left for the NBA the spring before. Tom Izzo's team has struggled with injuries and other health issues all season, but they've been disappointing even when they've been at full strength. They'll head to Big Ten Tournament this week with eight losses and a national ranking of No. 22.

Another swing and a miss...and then an embarrassing trip over the bat on the follow-through...and then legitimate tears in front of 32,000 spectators.

The first week of the postseason was supposed to give the "experts" a temporary reprieve from being wrong. While the mid and low major ranks haven't, as a whole, been as strong this season as they have been in years past, the number of regular season conference races that were dominated by a single team was supposed to make predicting the first handful of auto-bids a manageable task. The theme of this post so far should tell you what the next paragraph holds.

Check out our daily projection for the NCAA Tournament field.

Vermont went 15-1 in the America East and Davidson posted the same record in the Southern Conference. Neither team made its league championship game. Belmont and Murray State dominated their respective divisions in the Ohio Valley, and both saw their NCAA Tournament dreams end at the hands of Eastern Kentucky. Most painful of all is the story of Green Bay, which was poised to be the 12 seed that everyone picked to win at least one game in the big dance. Now the Phoenix are, at best, a longshot to make the field of 68 following an overtime loss to Milwaukee in the Horizon League semifinals.

All of these upsets will reignite the debate over whether or not this is the right way to do things (they actually have already), but for now, they're simply providing the most vivid piece of evidence yet that none of us know anything. It should make for a terrifying few weeks for the nation's elite teams -- or at least the teams that we incorrectly believe are elite -- and one hell of a viewing experience for all the rest of us.

Between now and then, I'm going to write in a way that will attempt to make you believe that I have some semblance of an idea about the topic at hand. I'm telling you right now that I don't, and that it's okay because nobody else does either.