2014 NCAA bracket predictions from a bot

We asked our resident Campfire Bot to predict the NCAA Tournament game-by-game. It did, and the results were … something.

Share All sharing options for: 2014 NCAA bracket predictions from a bot 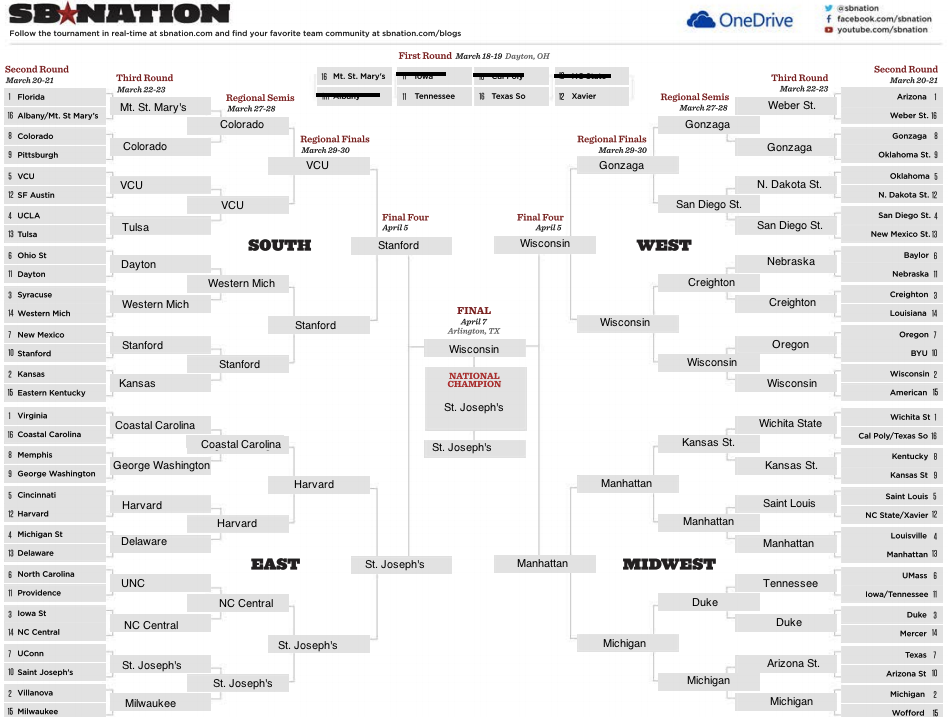 Editors note: In an effort to determine whether a bot could pick the NCAA Tournament better than all of us, we asked our resident Campfire Bot to choose the NCAA Tournament. Meet Campfire Bot, a versatile bot that hangs out with us at work all day. Among its many talents, cfbot is able to take inputs and choose between them. This made picking a bracket rather easy, at least in terms of execution. In terms of validity, though … well, the bracket at the top of this post speaks for itself.

Note that the bracket was chosen before the First Round games and that cfbot is already off to a rocky start. Mount St. Mary's did not win on Tuesday night, thus eliminating cfbot's first pick, and a colossal upset.

A note on that: I started in the top-left of the bracket as cfbot and I embarked on this mission. I asked it to choose Florida or Mt. St. Mary's and it spit out the latter. Perplexed, I asked again and got the same result. I tried multiple combinations, switching the order the schools were arranged and the naming of Mt. St. Mary's. The bot kept choosing it. It was dead set on picking the 16-over-1 upset.

This was a sign of things to come. Our wonderful cfbot chose three 16-over-1 upsets, with only Wichita State surviving. Cfbot is your friend that picks all upsets and gloats when it gets one right. Or it's so advanced that it is clued in on something we've missed. Who knows!

The only regions that looked like they had some semblance of order were the West and Midwest … and then Manhattan advanced out to the Final Four. Yes, that's a Final Four of Wisconsin, Stanford, Manhattan and St. Joe's. And yep, that's St. Joe's as the national champion.

Either we've finally proved that humans are smarter than Campfire Bots, or the bot knows more than us and will soon take over the world. Both of these results are in play.

And now, cfbot explains its bracket.

*I asked cfbot for a GIF at the conclusion of this exercise. That was the actual GIF it gave me.