San Diego State needed overtime to beat the New Mexico State Aggies, and Texas dropped ASU with a buzzer-beater off an offensive rebound.

San Diego State needed overtime and 23 points from guard Xavier Thames to beat the New Mexico State Aggies, 73-69, on Thursday night. The Aztecs blew a 32-20 halftime lead and a seven-point lead with a minute left, but outscored the Aggies 13-9 in overtime to close Thursday NCAA Tournament action.

SDSU advances to face No. 12 seed North Dakota State in the third round.

In the second-round game, NMSU cut it down to a three-point difference with 33 seconds left, and when SDSU lost the ball on an inbound pass, the Aggies took full advantage.

Guard Kevin Aronis missed a three-point attempt with just less than 10 seconds left, but an offensive rebound allowed him to get another look atop the arc. That shot dropped, and San Diego State couldn't take it the length of the floor as regulation ran out.

Texas big man Cameron Ridley picked a loose ball off the floor in traffic, then floated a lefty hook shot over Arizona State big man Jordan Bachynski just before the final buzzer to give the Longhorns an 87-85 victory in the second round of the NCAA Tournament.

Ridley finished with 17 points, 12 rebounds and four blocks, and he got the best of Bachynski, who scored 25 points and added seven rebounds.

ASU seemingly had all the momentum in the final moments.

Bachynski slammed a dunk home with less than a minute to play giving his Sun Devils an 83-82 lead, but an and-one off an offensive board by UT forward Jonathan Holmes gave Texas an 85-83 lead with 32 seconds left. A play later, Texas gave up its own offensive rebound to ASU's Jonathan Gilling, who was fouled.

He tied the game at the foul line with 17 seconds left, and Holmes missed a three-pointer on the Longhorns' final possession. But another failed box-out gave Ridley the chance to barely get a shot off before the buzzer and over Bachynski, the Pac-12's all-time shot-blocking leader.

Texas advances to play the Michigan Wolverines in the Midwest regional.

Luke Hancock scored seven of his 16 points in the final two minutes, and the Louisville Cardinals finally found enough juice to beat the Manhattan Jaspers, 71-64, and avoid a bracket-busting upset. The Cardinals will play No. 5 seed Saint Louis in the next round.

Hancock hit two threes after teammate Russ Smith broke open the offense that had struggled to score all night against Manhattan's matchup zone defense. Jaspers coach Steve Masiello, the protege to Louisville coach Rick Pitino, coached his team to holding the Cardinals to 36 percent shooting on the day.

Ashton Pankey led Manhattan with 16 points in the loss, but the Jaspers couldn't overcome giving up 16 offensive rebounds thanks to an active Montrezl Harrell, who led the Cardinals with 13 rebounds.

It took a while for the Villanova Wildcats to shake the Milwaukee Panthers, but in the final five minutes they turned a 10-point lead into a blowout with a 14-4 finish in a 73-53 victory. Jay Wright's team struggled mightily from three-point range by going 4-of-23 from deep, but defensively, it was hard to find issues for the Wildcats.

Villanova advanced to the third round of tournament, where it will face the UConn Huskies.

Milwaukee shot 29 percent for the game and went 6-for-24 from three-point range. Forward Austin Arians scored 17 points and hit four threes, but there wasn't enough firepower to keep pace with Villanova, which had five players in double-figures. 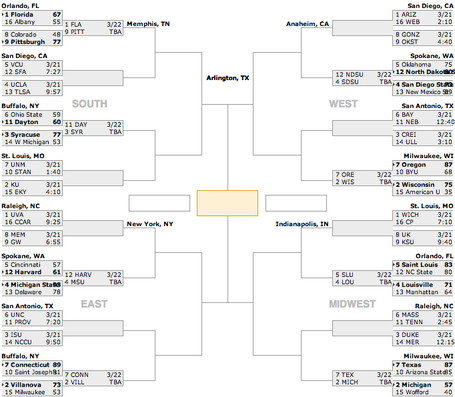