Would Michael Jordan have starred in today's NBA?

Many say the rules changes to open up the game would make the game's greatest player even more effective, but is that really true? On the flip side: would today's best player, LeBron James, fare well in Jordan's era?

Share All sharing options for: Would Michael Jordan have starred in today's NBA?

Basketball as we currently know it didn't exist in the 1990s. Yes, the object of the game was still to put the ball in the hoop. Yes, the team that had the most points after 48 minutes was declared the winner. Yes, teams still had five guys a side.

But it wasn't the same game. Today's game is fast, guard-driven, perimeter-oriented, spacing-infested, chaotic. Outside shooting is the most important offensive skill; lateral quickness and length tie for the most essential defensive one. The 1990s' game, on the other hand, was everything today's game is not. It was slow, post-oriented, physical, structured. If you were big and/or tall, you had a huge advantage.

This is why many find Michael Jordan's dominance in that era even more remarkable. Jordan succeeded during a period where the deck was stacked against guards. He soared over his taller enemies, taking special glee in dethroning Patrick Ewing. This has led that same school of thought to suggest that Jordan would have it easier today, that he'd take advantage of the extra space not being cramped by behemoths and physical hand-checking defenders.

But that'd be too simple. Would Jordan really dominate in today's game? In contrast, would LeBron James really struggle in Jordan's era? 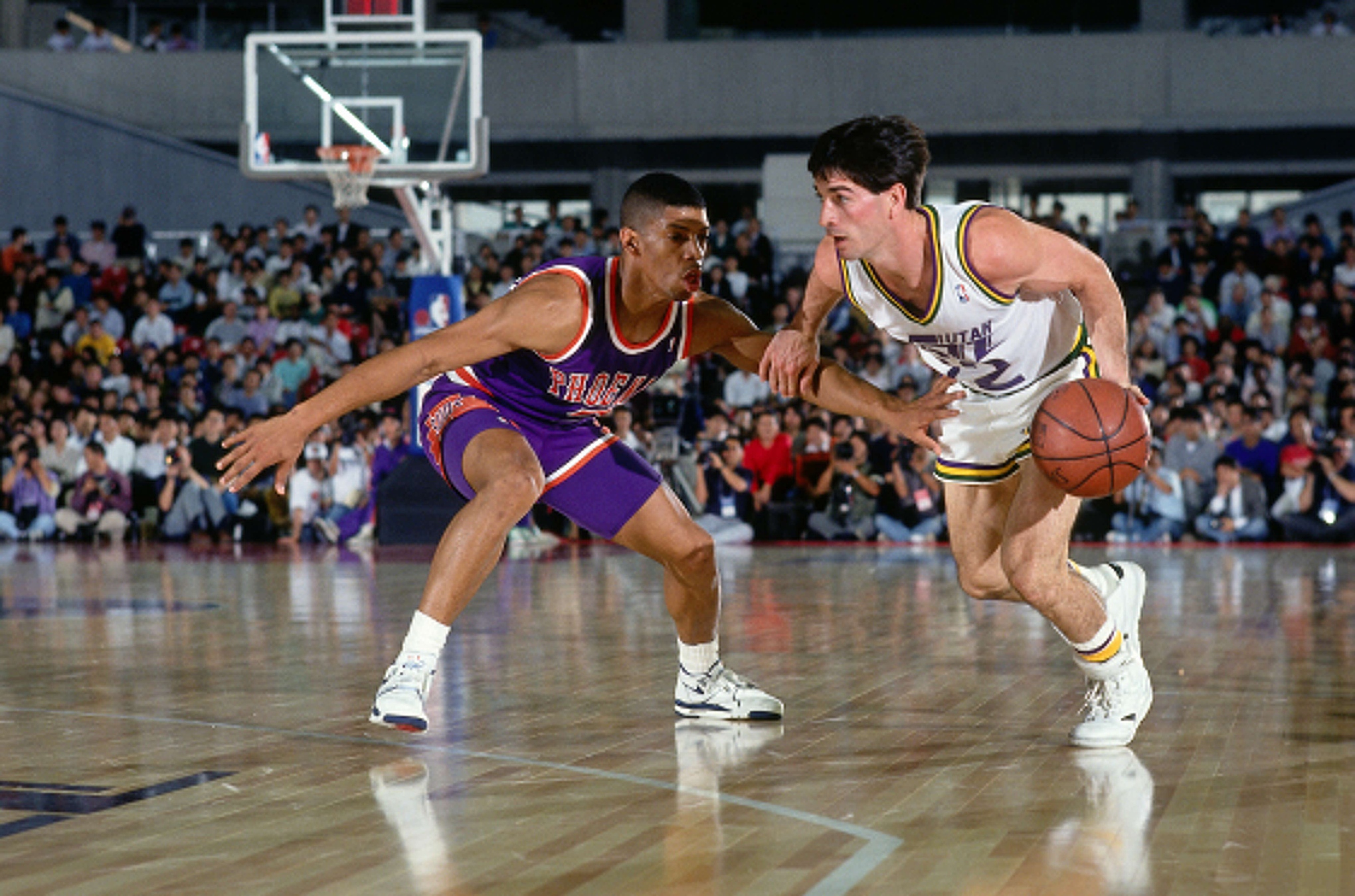 Ever notice the way point guards used to back their way down the court, using their wide posteriors as a way to shield off defenders? Ever notice how only 38-year-old Andre Miller ever does that anymore? It's because of hand-checking, which allowed defenders to stick their forearms into their man's chest to impede their progress towards the rim. With that kind of advantage, the best way to prevent defenders from poking at the ball was to make them hand-check the back.

Oh, sure, it technically wasn't allowed. The league tried outlawing the practice several times to no avail. In 1978 -- yes, 1978 -- the league said if hand-checking impeded a player's forward progress, it was to be prohibited using "rigid enforcement." That didn't work. After a particularly ugly Finals in 1994, the league tried again, outlawing all hand-checking that happened from the baseline to the opposing three-point line. That somewhat alleviated the problem, but the game was still as physical as ever in the frontcourt. It was only in 2004, when the league disallowed any arm contact on drives and added a new defensive three-second rule, that hand-checking was truly eradicated.

This is what Jordan faced every night. Nobody was quick enough to stay with him, so they clutched, grabbed and held to prevent him from getting to the basket. The Pistons started the practice, the Knicks continued it and countless other contenders copied it. 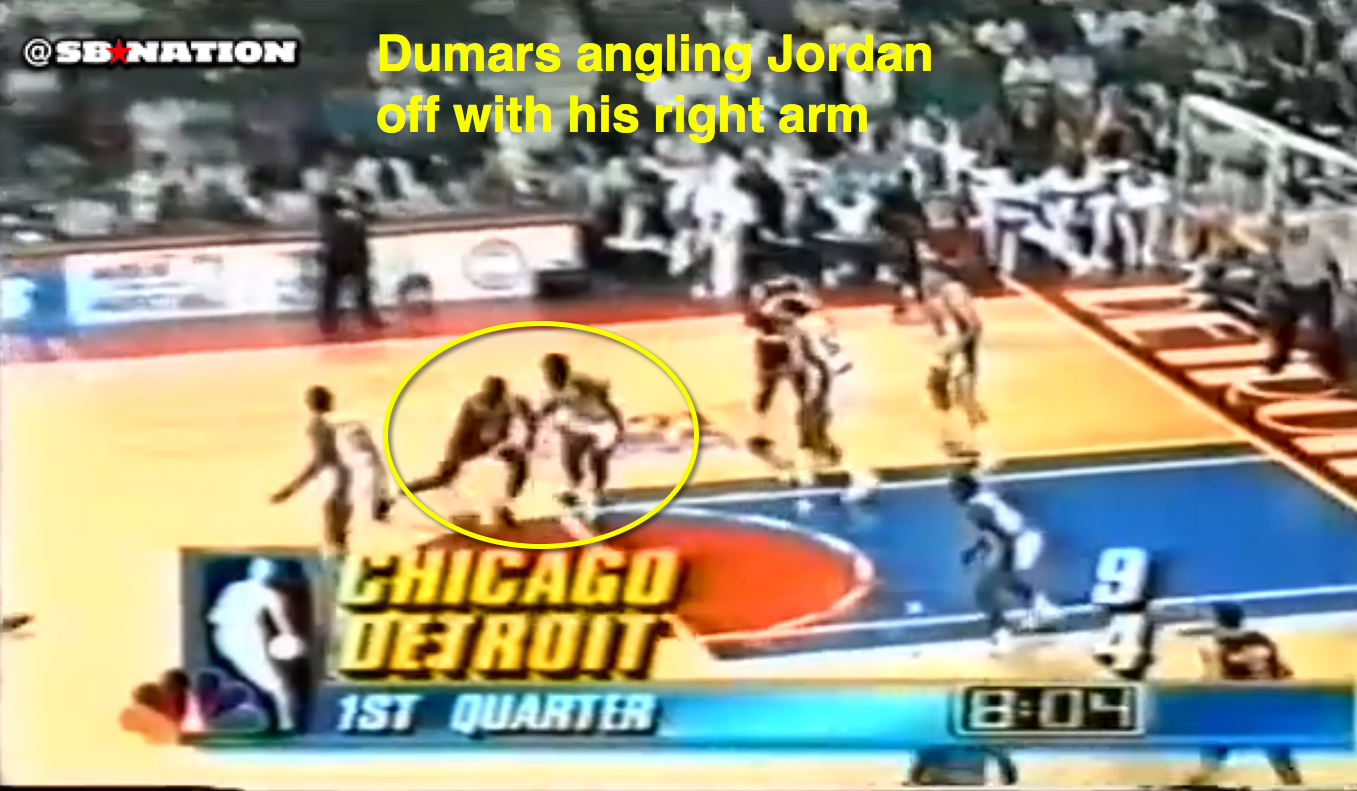 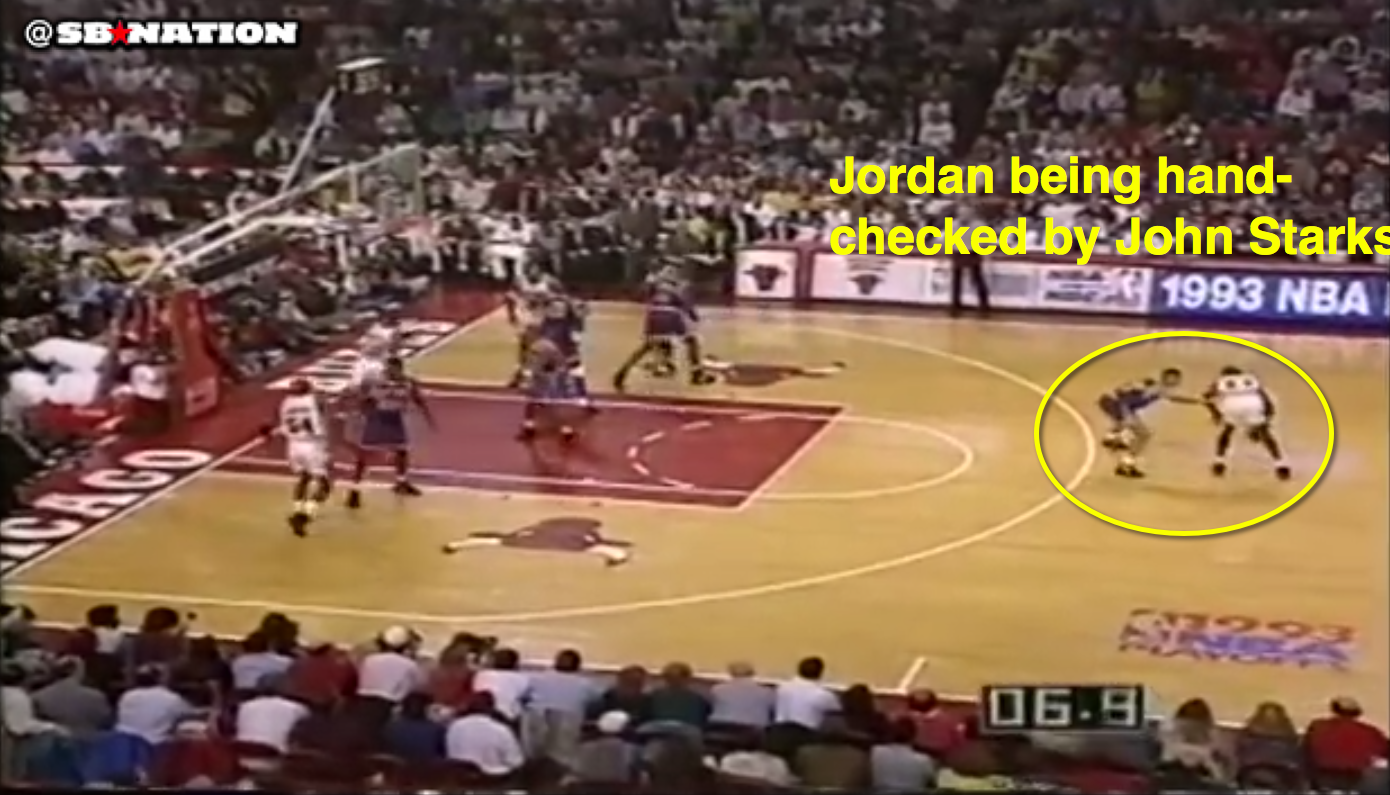 The hand-check gave a second life to so many slow perimeter players. Craig Ehlo would have been fried in this era unless he developed some lateral quickness, for example. But he ultimately was the man tasked with checking Jordan, and despite some memorable failures, he was better at it than most.

This is a world LeBron James never knew. At his size, James would have been physically imposing in any area, but he's especially difficult to contend with when he's able to get a full head of steam against a player who cannot hand-check. Hand-checking was a proactive defensive measure; without that tactic, defenders must react to James by sliding their feet to beat him to the spot. Tough to do when he can drive through any bit of contact that results from being late.

But keep in mind: this only applies to the man directly in front of Jordan or LeBron. While the changes here aid Jordan's case, the changes elsewhere do the opposite.

Five-man defensive schemes in the 90s were incredibly simple compared to today. The passage of time explains some of this: every industry is built on innovation, and innovation is built on fixing a problem with the common methods of the present. There would be no Tom Thibodeau without Chuck Daly; no Mike D'Antoni without the Showtime Lakers.

But the simplicity was also due to the existing rules, which penalized teams for, essentially, playing zone. If you wanted to double-team a player, you had to double-team a player. There was no digging down, no helping off non-shooters to pre-rotate to stop the bigger scoring threat. It was double-team or nothing. And while a few teams, such as George Karl's Sonics, would break the rules and dare officials to whistle for illegal defense, most abided by the regulations.

This made it especially easy to post up. Send your tallest man on the block, let him back down his single defender, and all he needs to do is pick out the teammate who the defense helped off to double-team. If no double-team, go to work. Consider the massive difference in these two screenshots: 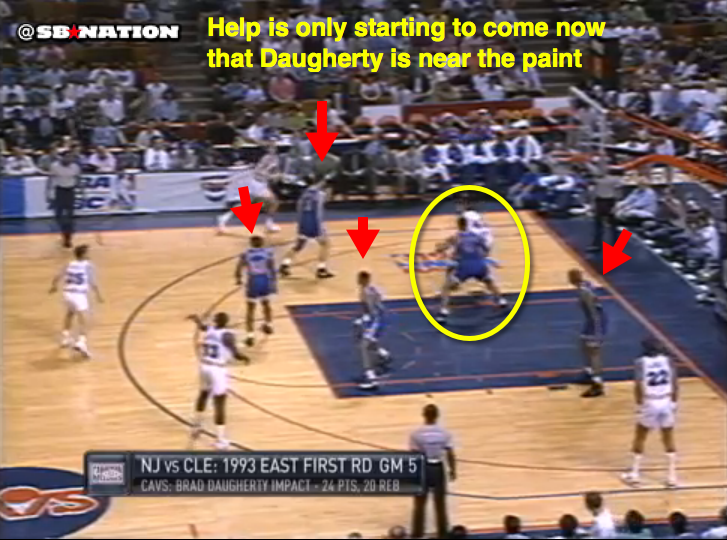 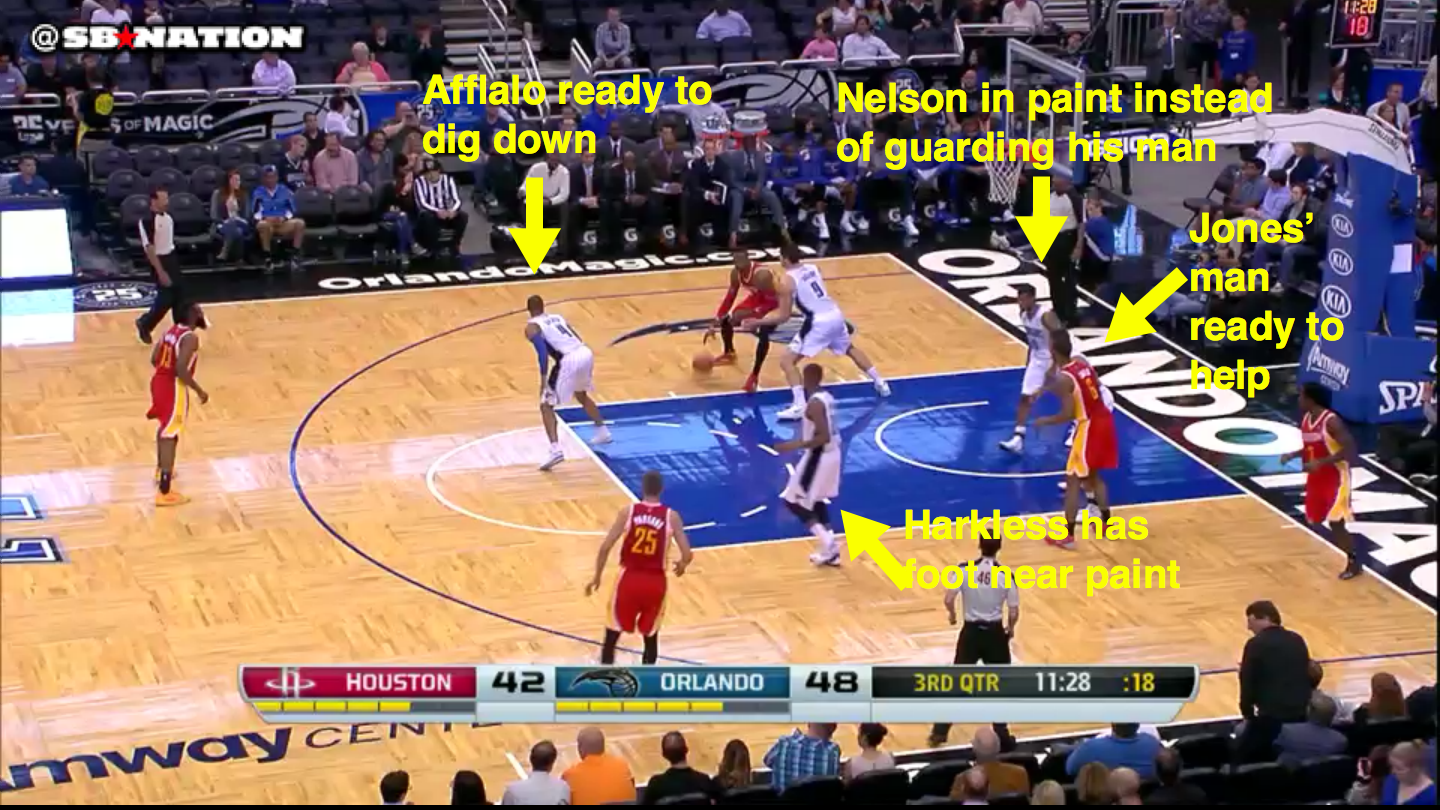 The first is from a 1993 playoff game between the Nets and Cavaliers. New Jersey is so concerned with Brad Daugherty's ability to see over the defense and find the open man that they are single-covering him. Rumeal Robinson and Drazen Petrovic are sticking on their men, Chris Morris is sort of coming to help and Derrick Coleman has one foot outside the paint because he needs to stay within that length of Larry Nance. Daugherty hits a short turnaround on the play.

The second is from a March Rockets-Magic game. Dwight Howard has the ball in a similar spot, yet must deal with Arron Afflalo digging down from the top of the key, Jameer Nelson lingering in the lane instead of staying with Patrick Beverley and a third defender (he's hidden) in the paint thanks to Terrence Jones. Howard does well to get a layup opportunity, but misses it amid all the arms in the paint.

The difference is stark. Where Daugherty has clear sailing, Howard has to consider multiple defenders who could impede his path. You can see why teams posted up so much back in the day. Centers who weren't double-teamed scored over each other, and centers who were double-teamed could easily find the open man.

That had lasting implications. These days, coaches bench size in favor of speed and shooting. They accept defensive trade-offs because too many non-shooters makes it impossible to conduct a reasonable offense. In the 90s, though, teams had to actually defend every player on the court unless they sent a hard double-team. This allowed teams to play unskilled titans or defensive specialists who nevertheless had to be accounted for because the rules said so.

This occasionally was taken to the extreme. In the 1991 playoffs, Don Nelson would station his biggest player, whether it was journeyman Jim Petersen, youngster Tyrone Hill or the previously unknown Tom Tolbert, 30 feet from the hoop just to get David Robinson out of the lane. They weren't going to do anything productive from 15 feet, much less 30, but Robinson still had to come out and pretend like they could anyway. The Warriors posted up Mitch Richmond and Chris Mullin against smaller players, feasted on the driving lanes Tim Hardaway now had and upset the Spurs in four games. 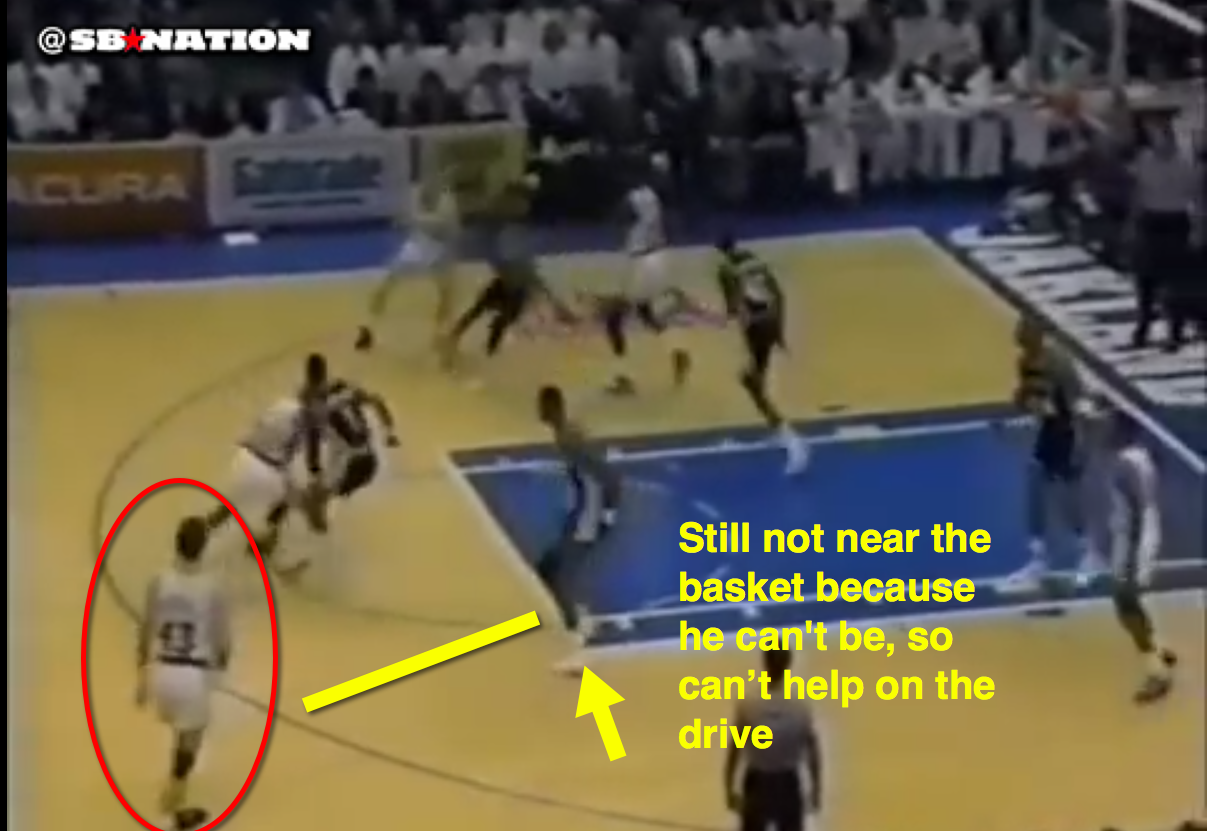 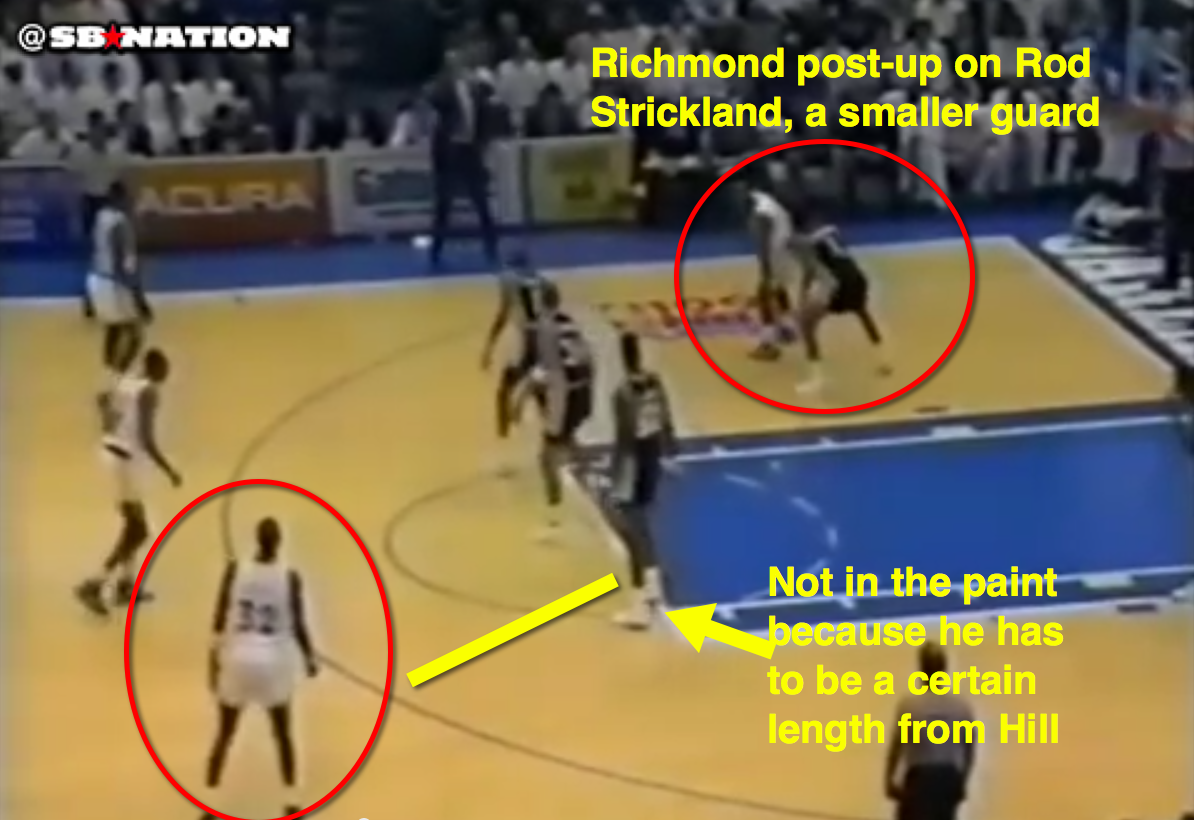 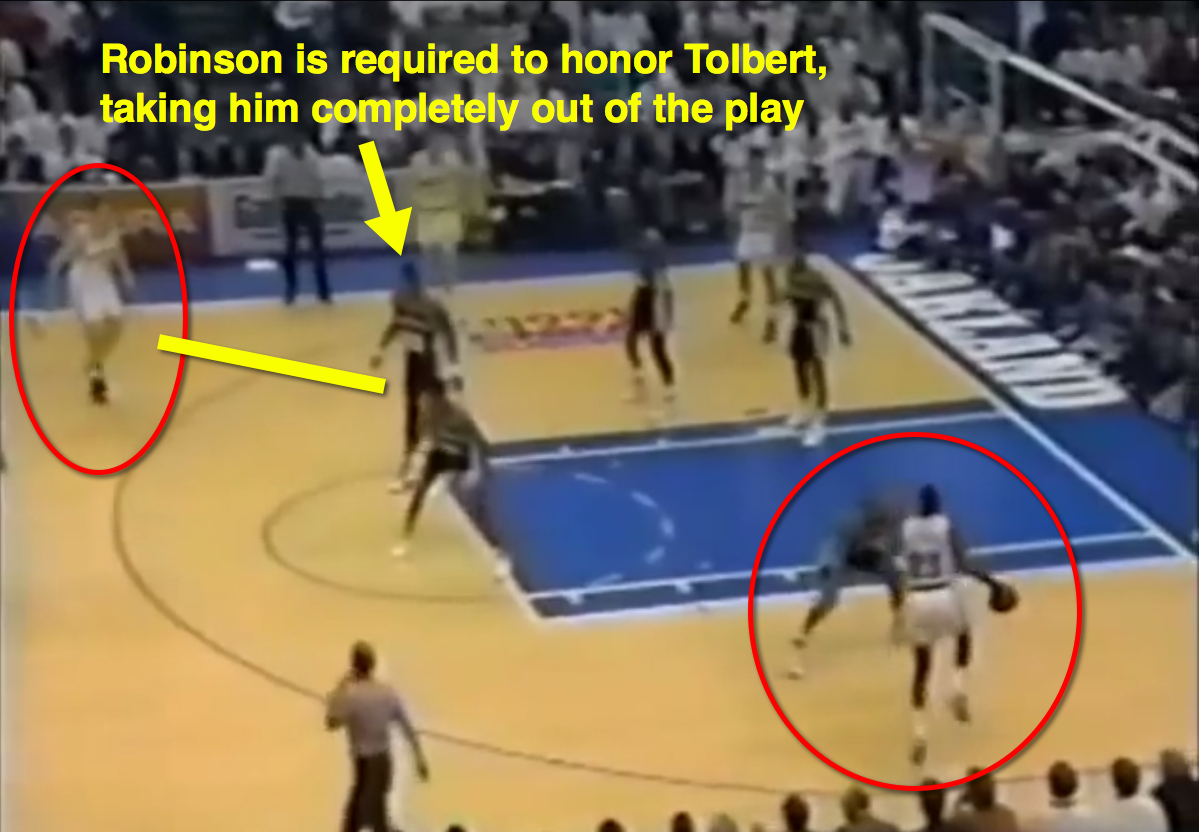 In 2014, Robinson would have tiptoed the lane while essentially playing a one-man zone around the rim and Nelson would have been forced to choose between going small and getting lit up on the other end or leaving his big men in and suffering spacing consequences. In 1991, those centers were the unsung heroes by standing aimlessly well beyond the three-point line and doing nothing.

Place LeBron James in this world, and you can see how he'd be even more devastating. He'd have to fight harder to beat his own man, but once that happened, it wouldn't be hard to pick out open players. He averages nearly seven assists for his career; imagine how many he'd have if he could back someone down, draw a double-team and easily find the open man. Imagine how many points he'd get in the low post if he only had one man to beat each time. Jordan prolonged his career by learning how to back his man down and shoot over them when he realized no help was coming. The development of LeBron's post game would have come much faster if he didn't have to worry as much about reading that help. 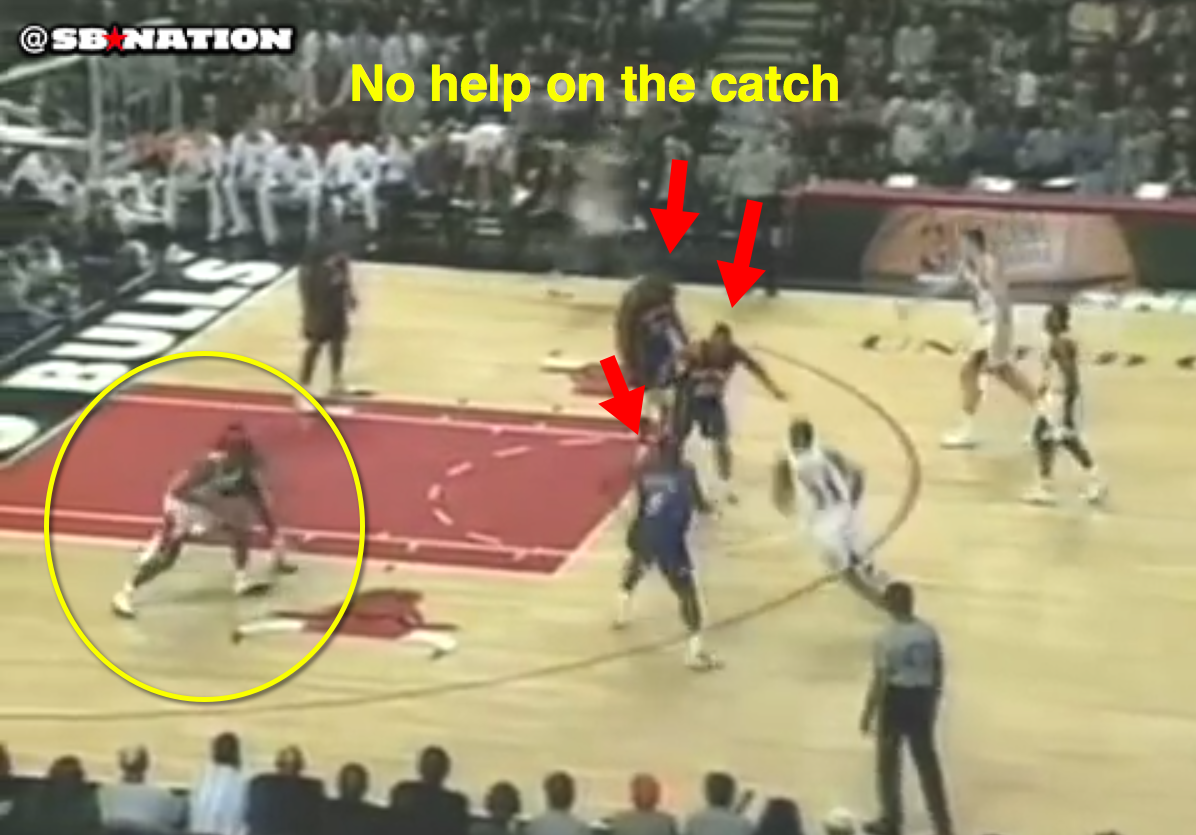 To this James one:

Jordan has an entire side without any bodies immediately in his way. James, meanwhile, has all five Rockets' eyes on him as he begins his move. Which do you think is easier to score against?

So, which player would be better in the other's era? It's complicated. In real life, James would learn how to use his size and raw strength more effectively and Jordan would have learned how to rifle crosscourt passes to open three-point shooters while running the high pick-and-roll.

In this fantasy world? It's tough to say. Perhaps Jordan would have put up bigger numbers in the regular season against poor defenses, only to struggle against the quickness and length of tough, smart schemes in the playoffs. How would he fare against a team like the Pacers that would corral him in a mid-range pocket on a pick-and-roll? By contrast, perhaps LeBron would have averaged 13 assists a game, yet be stifled in the post by wider, slower defenders on teams that refused to double-team him. LeBron would not have enjoyed going up against Anthony Mason, that's for sure.

In other words, they were both great for their own specific eras. It's a boring answer, but it's also the right one.