In search of baseball's most snakebitten team

Not a search for the team with the worst injury problems, because typing "the Braves" wouldn't make for an interesting article.

Share All sharing options for: In search of baseball's most snakebitten team

"I don't believe in the Baseball Gods, but I'm scared of them."
- Someone, probably

I don't believe in the Baseball Gods, but I'll refer to them 563 times this year. It's an easy way to note that baseball is like a box of chocolates, but with spiders where the nougat usually goes. Picture, though, what it would be like if there were actual Baseball Gods, Greek or otherwise, atop Mt. Olympus, meddling with our affairs just because they could. It would sure make a lot of sense.

The historically inept backstops of the South Side

They had A.J. Pierzynski for close to a decade. Now they don't.

The historically inept backstops of the South Side

Now picture what it would be like if one of those Gods descended into the mortal world and tried to pass as a baseball player. What would he be like? He'd have legendary tools, of course. He wouldn't be susceptible to age, though he'd have to give up in his mid-40s, lest the rest of us catch on to the ruse.

Nolan Ryan, then. That's what would happen if a Baseball God was one of us, just a slob like one of us. Now picture what it would be like if a team pissed that Baseball God off. Like, say, the Rangers.

.@Rangers 2B Jurickson Profar out 10-12 weeks with torn muscle in right shoulder: http://t.co/VsgX3SgGi0

Something like that. The only thing I can't figure out is if Ryan's a god, why would he have let Game 6 happen? I guess He is not meant to be understood. The Rangers probably shouldn't have ticked him off, though. It's possible that they're the unluckiest baseball team of the offseason.

Let me do some research that involves all 30 teams and okay, I'm done with that research and the answer is the Braves. The Braves have been hosed more than any other team, considering that 40 percent of their rotation is out for the year with career-threatening injuries, and a third starter is having shoulder issues. There's no comparing Brandon Beachy's elbow to Darvish's stiff neck.

Still, there has to be a way to measure the je ne sais quoi of injuries, to put a number to I-got-a-bad-feeling-about this. What I did was find every player with an injury concern -- stiff neck, blown elbow, pulled hamstring, trimethylaminuria -- for each team. Then I used ZiPS's projections to estimate what kind of production their teams were expecting. This treats Chase Headley's calf strain (he played over the weekend) the same as a serious injury because I'm looking more at perception. Which teams feel the most snakebit right now, even if their problems could be mostly over by the end of May? 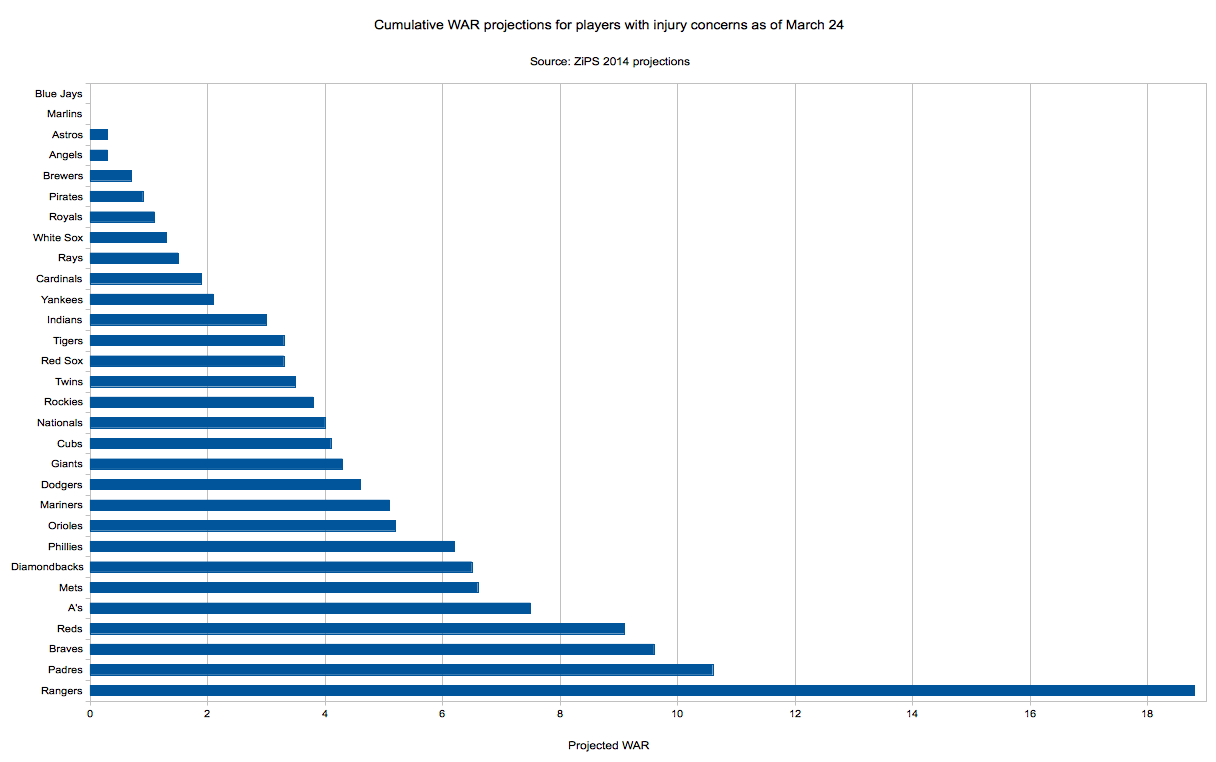 It's not that the Rangers have the worst injury problems of the season already. I'm going to let me check okay no that's still the Braves. But it's the names that are making fans wince. These are important players, all. This is 60 percent of the rotation and a should-be-incredible young keystone combo. The Rangers shouldn't feel as if their season is over, far from it. But they've earned the right to tug on their collar and make exaggerated, vaudevillian noises of concern. They've earned it.

When you add up all of the players with injury concerns, the Rangers have almost twice as many wins at stake than the next team, especially when you consider that Chase Headley is a borderline inclusion for the second-place team.

If the Rangers feel uncomfortable, that's why. Because the good feelin' of spring was ripped away from them before they arrived at Surprise, and they haven't found it since.

If you're looking for optimism, Rangers fans, remember this mantra: Better now than September. The Rangers feel like a pack of Wily E. Coyotes right now, with ACME elbows and hamstrings exploding everywhere, but there's a lot of season left.

Post-script: There's no sense putting this together and deleting it without sharing. Here's the raw list I worked from, featuring every player with a current health concern. I used MLB Depth Charts, who had a little red cross next to the names of injured players. Some teams sure had a lot of red crosses. Here's every player with an injury concern as of Monday, March 24.

If the offseason wasn't about keeping Max Scherzer at all costs, what was it about?