Who will think of the Basketball PhDs?

An anonymous ex-player is fed up with NBA owners hiring people without Basketball PhDs for general manager jobs. What the hell is a Basketball PhD?

Share All sharing options for: Who will think of the Basketball PhDs?

That's what made this curious ESPN.com story apparently written by Chris Broussard so ... well, curious.

There is a growing concern that the rise in the popularity of basketball analytics (such as player efficiency rating and true shooting percentage) has led to more stat-based personnel hires rather than ex-players becoming general managers.

One former star in the NBA with years of front office experience said that there is a divide within front offices between those who are perceived to be stat guys and those who are considered basketball lifers.

If there is a divide, that's a problem individual front offices absolutely need to figure out. Front offices need to be united. But the concern that quants are taking jobs from ex-players is really overblown. By my count, there are two NBA GMs who don't have lifelong ties to organized basketball: Daryl Morey in Houston and Sam Hinkie in Philadelphia. Other GMs all either played in college or the pros, worked in basketball in college or have worked only in basketball after college.

So our thesis here -- that quants are taking all the GM jobs from ex-players -- is suspect. The requisite anonymous quotes are far worse.

"Basketball guys who participated in the game through years of rigorous training and practice, decades of observation work through film and field participation work feel under-utilized and under-appreciated and are quite insulted because their PhDs in basketball have been downgraded," the former executive, who chose to remain anonymous, told ESPN NBA Insider Chris Broussard.

Whoa. You know, for PhDs in basketball to be downgraded, they need to have first actually existed. So let me help with that. 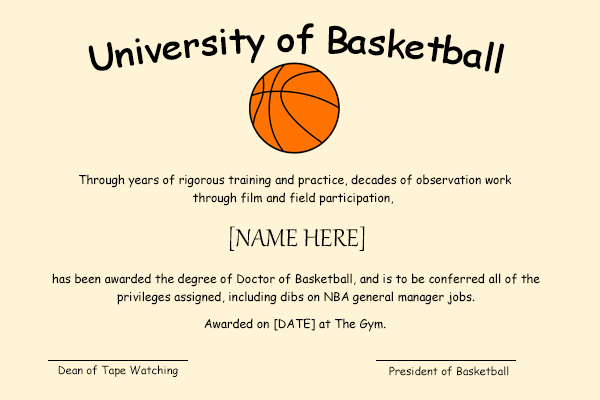 "Generally speaking, neither the [newer generation of] owners nor the analytic guys have basketball in their background," the longtime executive told Broussard. "This fact makes it easy for both parties to dismiss the importance of having experience in and knowledge of the game."

Take a look at the GMs in question and other recent hires.

Rob Hennigan, the young GM of the Magic, is considered a stats GM. He is also Division III Emerson College's all-time leading scorer. Sam Presti, the vanguard of the New Wave, played at Emerson too. His first job out of college? He interned for the Spurs and convinced his boss to draft Tony Parker. His entire professional life has been in basketball.

Our profile of the now-Suns head man when he was still an assistant with the Celtics.

The Suns' Ryan McDonough? His entire professional career was spent working for the Boston Celtics (a basketball team) before getting hired by Phoenix. The Kings' Pete D'Alessandro? In college, he worked as a video coordinator for a guy named Lou Carnesecca. After law school and a spell in politics, he worked as an agent and then under Chris Mullin (noted Basketball PhD) with the Warriors.

Masai Ujiri, the vaunted boss of the Raptors? He played two years in college and six years in Europe before getting into scouting and, eventually, advanced metrics. The Blazers' Neil Olshey worked in player representation and draft preparation before joining the Clippers in a player development role. (Also, Olshey's background isn't in advanced math: it's in soap opera acting.) Bob Myers, who leads a front office invested in quant analysis, played four years at UCLA and was an agent before switching sides. Denver's Tim Connolly has worked in the NBA since 1996. Or, longer than Andre Miller.

And the league's very latest GM hire, Phil Jackson, not only has a Basketball PhD, he's handed out a few, too.

Let's look at that quote again.

"Generally speaking, neither the [newer generation of] owners nor the analytic guys have basketball in their background," the longtime executive told Broussard. "This fact makes it easy for both parties to dismiss the importance of having experience in and knowledge of the game."

Wrong. The so-called analytic guys just don't have the qualifications this anonymous ex-player feels are necessary for a Basketball PhD. Maybe Hennigan has a Master's in Basketball Administration, but no PhD in Basketball. That quoted ex-player is just mad that NBA playing experience is no longer the fastest track to one of those coveted NBA general manager jobs.

Should it be? We'll find that out as the NBA continues to diversify its front office hiring (which was once almost 100 percent ex-NBA players). If the quants without Basketball PhDs -- Morey and Hinkie and any who follow them -- crash and burn, the market will correct. (It happened in baseball, to some extent. Ask Paul DePodesta.) What the brilliant Amin Elhassan says in the video that accompanies Broussard's piece is spot on: the reality is that quants aren't taking over, front offices are just becoming more well-rounded. McDonough is a perfect example of the new style of GM: a tape-obsessed "basketball lifer" who knows the cap like the back of his hand and is totally comfortable using advanced metrics. Hybrids -- double-majors in Basketball and Math, not full-on quants -- are the real future of the NBA GM position.

If that leaves some ex-players behind, so be it. If teams suffer for it, they'll start hiring ex-players exclusively again. But making this an open partisan mess by giving inflammatory quotes to a reporter sure isn't going to help bridge the gap. It'd be much better for these ex-players feeling left behind to make themselves indispensable to NBA owners and decision-makers. Complaining about the wind won't stop it.