The man who ruins fantasy drafts

Online fantasy drafts are terrible. @boring_as_heck has made an art out of making them worse.

Share All sharing options for: The man who ruins fantasy drafts

It's one of the strangest paradoxes of the sports internet. Fantasy sports are generally fun to do, if mostly fun in the way that a Tamagotchi hacked to provide maximum disappointment is fun. By and large, having a fantasy team or three is a way to care more about a thing we already care about, and a bit of light and un-serious intellectual exercise. So: mostly harmless, and mostly good.

The paradoxical part is that this mostly harmless and mostly good thing also makes people into total fuming jerks with hilariously upside-down priorities. There is, really, only one way to engage them. That is what Stefan -- a Canadian stand-up comedian and writer who goes by @boring_as_heck on Twitter -- does. Specifically, he goes into Yahoo! online fantasy mock drafts and ruins them.

Anyone can ruin a fantasy draft. You may well have done it yourself, by being late or drunk or not paying sufficient attention to whether or not Frank Gore has been taken when obviously he has it's like the ninth round. What makes Stefan's work different is how he leverages the seething brodeo vibes in the mock draft room for maximum effect. It's not complicated, really -- Stefan's draft strategy is mostly to take the Most Ridiculous Player Available -- but the result, as you can see in his destructions of fantasy football and fantasy baseball drafts, is spectacular. Stefan is gearing up for fantasy baseball season, but took the time to answer a few questions about his work. 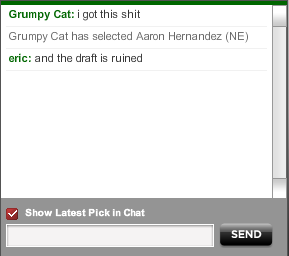 There's a very specific self-serious dorkery that's unique to random online fantasy drafts with strangers; it's one of the weirder vibes on the internet. No one knows anyone, everyone's really locked in on this insignificant thing and dead serious about it, there's a sort of diffuse cloud of bro-ed out peevishness. Was there a specific inspiration that led you to decide to ruin all that in this particular way?

The terrible history of the NFL Draft

The terrible history of the NFL Draft

I was in a random public fantasy hockey league like 10 years ago, give or take, and some dude on purpose picked the worst team imaginable. People were PISSED. Cursing this guy out, threatening him, whatever. All I could think was "this guy is a genius." It was a fantasy league with complete strangers, no money involved, and people were just melting down. Basically it was like my equivalent of the apple falling on Isaac Newton's head, if the apple pissed off dozens of overly serious fantasy sports dudes.

Fantasy sports bros seem to have maybe the most significant humor deficit on the internet, with the possible exception of people commenting on political articles at newspaper websites. Why make them your metier for this particular endeavor?

Yeah, I mean that's basically why I chose to ruin mock drafts. The people who take them super seriously are just asking for it. They aren't even real fantasy drafts. They're practice fantasy drafts, and on Yahoo!, there's like 20 new ones every five minutes. It's not hard to say "Well, this one is a wash, let's just wait literally 45 seconds for a new one." Also I guarantee that most of the people who participate in multiple mock fantasy drafts probably aren't going to win their leagues. It's going to be the dude who just picks the players he's heard of before. 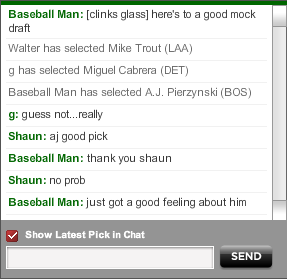 The responses generally seem ... well, disapproving probably covers it, although it doesn't quite convey how pissed people get. How would you describe the general reaction in the draft room? Has anyone ever NOT said "fuck this" and bailed? Like, someone being all "okay, he just took Aaron Hernandez with the first overall pick of the draft, let's see what quarterback he takes."

Every so often you'll get people who agree with me that this is extremely hilarious. For the most part it's people calling me a cocksucker and threatening physical harm, but yeah occasionally some dude will be like "well played." It's a nice change of pace. Someone once told me I ruined his day, which like, come on. If the success of your day was dependent on participating in a realistic practice fantasy draft, I don't think I'm the one that ruined it. 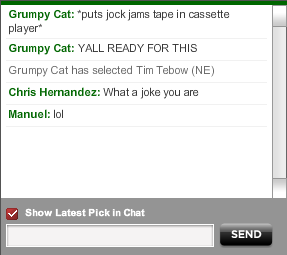 How much fun is this for you? Obviously you're not doing it because you expect it to result in a book deal or whatever, but what do you get out of messing up strangers' fantasy drafts?

Jason Collins made sports history just by doing his job.

It's really, really fun because it's incredibly simple and I can knock off about 10 good ones in like 15 minutes. The challenge is in doing something different every time. It's easy to just scroll down to the end of the Yahoo! player list and pick the guy at the bottom, but unless he has a funny name or is an alleged murderer, you probably won't get the best reactions. It's satisfying to plan out a bad pick -- like taking a guy with the same initials as Adrian Peterson and pretending you think they're the same guy -- and even more satisfying when somebody responds with an all-caps "FUCK."

Baseball is next, chronologically. How are you approaching this latest challenge? Is there any preparation or research involved, or are you just going to stay focused, play your game and go out there and take Luke Scott?

I don't really know much about baseball, which plays to my advantage. I'll ask Twitter for player suggestions, and they usually come up with some solid ones. My strategy is to focus on a) retired players, and b) insanely bad players that everybody knows are bad. Also, c) players with funny or cool names. Luckily the Yahoo! player list includes a lot of players that probably shouldn't be on there, so I can keep taking Roy Halladay and Lance Berkman first overall. They're both primed for a bounce-back year, IMO.