Wrasslin' Story Time: The WWE doesn't hate you, because that would mean they care

Steven Godfrey worked in professional wrestling for five years. Now he works at SB Nation. These are his stories.

Share All sharing options for: Wrasslin' Story Time: The WWE doesn't hate you, because that would mean they care

I used to sit in on meetings with our writing team. The writing team - nicknamed "Creative" in kayfabe terminology - was forced to present the upcoming plot lines of our TV show to the marketing and public relations employees at least once a week. Creative hated this process. If you didn't work on Creative, you didn't understand the complexities of pro wrestling and you never would.

The meetings helped us troubleshoot, as one time I lamented to a Creative member that our TV show was featuring female wrestlers in a tag team "bra and panties mud wrestling match" the same week that I had been ordered to pitch a profile of one of our executives to a Christian parenting magazine. I didn't ask for the segment to be removed outright because I never had that kind of power. I really just wanted a sympathetic ear for an increasingly impossible job.

"That's tough man, but if we lose the bra and panties it really takes away from the layering of that storyline. We're trying to build a narrative here," he said.

The next step for Mankind

Mick Foley continues his evolution as one of America's greatest entertainers.

The next step for Mankind

A few of us used to call these comments "Truman Show Shit" because our coping mechanisms for working in minor league pro wrestling had been reduced to the half-belief we were trapped in our own reality TV show.

Ten years after it had found its peak in the Monday Night Wars, veterans of wrestling's halcyon era littered our office. If every day wasn't 1997 those bastards were convinced tomorrow sure would be. Sometimes the network would push back on some of Creative's ideas, but they'd be damned if a bunch of 20-something ex-fans sitting in their own conference room were gonna point out storyline errors or provide "feedback."

To do just that would be the dream of so many fans, so many "smart marks" of the IWC (Internet Wrestling Community). On Monday night in Chicago a worldwide effort to disrupt WWE Raw's march to WrestleMania took over the Allstate Arena. It was a naive mission to protest on behalf of disgruntled WWE Superstar CM Punk, who abruptly left the promotion in January.

The movement rallied around the hashtag #hijackRAW, an attempted "shoot" tactic which WWE itself promptly seized as "worked" part of their storyline, thus nullifying the nerd coup. Former Punk manager Paul Heyman opened the show entering to Punk's theme music and delivered an absolutely brilliant promo that reduced the crowd's deafening "CM PUNK" chants to a serviceable conceit for "WrestleMania's" Undertaker vs. Brock Lesnar storyline. The fans never stopped chanting, and the show ended with reviled Triple H standing over a beaten Daniel Bryan, bookending Heyman's nullification of #hijackRAW with another chapter in Bryan's storyline, which has become WWE's meta-parody of wrestlers who try and trade on their IWC popularity as equity in the WWE Universe. All that heat went exactly where the WWE wanted it to. End of uprising.

It's a terrible thing, being popular on the Internet: We once had a talented young guy buried in the lightweight division. A few of our younger staffers were convinced he was destined to be an accessible, new media savvy star. Instead of wearing fanny packs and talking about the 'roided-out 80s on FM radio to promote a weekend house show, this kid could speak intelligently on video games to web sites and bloggers and introduce the company to the next generation. And he was fire in the ring. The kid could bump, yet he and most of the guys his age were all but ignored by the company.

His ring name was Chris, so one day I got the gumption to ask Creative what, if anything, they had planned for Chris.

"Uh, yeah. He's a good kid. Something there. You know that show I keep hearing about? 'Everybody Hates Chris?' I think that's it. We should really do something about that, maybe find a way to do something with that."

"Everybody Hates Chris" was a CW sitcom in which comedian Chris Rock narrated stories from his upbringing as a picked-on minority in a white suburb of New York in the 1970s. Our Chris was a 22-year-old white kid from the midwest. It was improv bullshit. Those infallible Hillbilly Hemingways had farted out a quick excuse in front of half of our company because they could.

Two days later I was reprimanded. A week later I stupidly approached a member of Creative and stated my case for Chris getting a push, capping it with what I would learn to be the most backhanded of compliments in that industry:

"Look, this guy is HUGE on the Internet. Our hardcore fans love him."

"Great," Creative responded. "Then we don't have to do shit with him ever."

WWE Elimination Chamber: What we learned 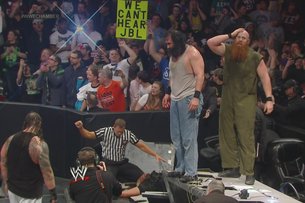 The road to WrestleMania is a whole lot clearer. Here's a recap of the Elimination Chamber PPV.

The cruelest thing I can tell a passionate, dedicated smark is that the more he knows the less he matters to WWE. The smark is the one person the company knows will be watching the show every week, no matter what. They're buying the licensed merchandise to complain about it on podcasts and paying the extra $20 at TV tapings to stand in an autograph line and tell their favorite disrespected mid-carder just how he should be used in the main event. Even at the emptiest of house shows (non-televised events usually packaged as tours) we could spot the dedicated IWC member on hand to record completely meaningless* match results for one of the "insider" news sites.

(*Seriously, most of them meant absolutely nothing. Unless we were promoting an ongoing TV storyline, house show winners and losers were determined at random and on the fly if a title belt wasn't on the line. No one cared, least of all the talent, yet the next morning we'd read a thousand word analysis on why certain matches were booked to favor a particular wrestler.)

The WWE doesn't care, because you're buying their product anyway.

Angry that Daniel Bryan or CM Punk isn't in the title picture at WrestleMania because of Batista? The WWE doesn't care, because you're buying their product anyway. I've been in these meetings, albeit for another company, but it's the same perception: You're an assumed gain, a given. Even when you swear you're never watching the show again (which focus groups told us is an empty threat), you're on various media platforms telling people how much you dislike our product.

The WWE doesn't care what a smark with a bookshelf full of Ring Of Honor bootlegs thinks. They care about marrying their company to Marvel Studios when Dave Bautista stars in "Guardians of the Galaxy" this August. They care about 7-year-olds and the uninitiated. If you're a self-professed smark who couldn't see a Batista title run dovetailing with a summer movie PR tour as soon as his casting was announced, you're not that damn smarky. If you ever believed #hijackRAW would do anything other than help WWE make more money, you don't understand this niche of pop culture (which you likely love more than anything else).

Video: The Undertaker remake of 'The Breakfast Club' is really weird

Yeah, even weirder than you're imagining.

If the dynamic of smarks vs. WWE can teach us anything writ large, it's that we're living in a transition era of pop culture, a turning point in which the community of self-aware consumers are not yet the established providers of content. Right now those who make the biggest decisions about our most coveted entertainment properties didn't attain their success through acknowledging crowdsourced feedback or checking Twitter. If you bought a ticket to boo in person at RAW or live-Tweeted your disdain, the WWE only sees another successful night of revenue and branding.

Creative finally did figure something out for Chris. They paired him with a veteran wrestler for a multi-week storyline in which he was the young and stupid kid challenging the wise old sage. One week, much to his personal embarrassment, they made him wear just a diaper to the ring and cry like a baby. The Internet howled in protest.

The next week Creative said it was one of the strongest segments of that week's show.