'Wow, I actually play basketball for a living': The Bradley Beal Q&A

The second-year Wizards guard talks to SB Nation about his preparation, adjusting to the NBA and the impact his family made on his development.

Share All sharing options for: 'Wow, I actually play basketball for a living': The Bradley Beal Q&A

TORONTO -- Trying to talk to Bradley Beal on a game day can be a difficult task. You can set up an interview after morning shootaround, but because he's the last guy on the court shooting, the equipment managers and assistant coaches are yelling at him to get on the bus before there's an opportunity to speak to him. You can try again pre-game, but he'll have his headphones on because he's zoned in.

After the Wizards managed to outlast the Toronto Raptors 134-129 in a three-hour, 32-minute triple-overtime affair, this interview appeared to be in jeopardy. Beal was slumped in his locker, having played a career-high 51 minutes. When he was approached, though, the 20-year-old responded warmly with a handshake and a hello.

Speaking with Beal, it's easy to understand why Washington bet big on him. Only a year and a half into his NBA career, it's already apparent he's mature beyond his years.

Here is a transcript of that interview:

SBNATION.COM: What have you learned from your first year? Any lessons to take away from the initial introduction to the NBA?

BRADLEY BEAL: That it's a long year. Realizing it's really long. You can have one bad game and you can play again less than 24 hours [later]. You need to have a short-term memory. That's a big thing that I learned a lot. Moving on from games, even good games that I have. Move on from them and be prepared for the next night.

SBNATION.COM: Is that something you have to keep in mind even within one game, not to get caught up or frustrated if it's an off-night?

BEAL: For sure. It's always going to be tough because you always want to make every shot. Every player wants to be that way but throughout the course of the game if things aren't going your way, still play hard and forget about it. If you miss five shots, forget about it. Continue to play, do other things to impact the game.

SBNATION.COM: What do you do to try to make sure you're actually able to be out there on the floor each night?

BEAL: I think my trainers are excellent. They do an excellent job of preparing me for games, during practice, after practice. It's just about taking care of my body. Strength coach making sure I'm lifting weights and doing corrective exercises to make sure I'm able to play. Nobody likes not being able to play. I've definitely experienced it my first two years. It's a big key for me, staying with my routines and my repetitions and making sure I'm doing the right things.

SBNATION.COM: You're a young guy who can probably get away with eating what you want, but have you started to pay attention to nutrition or are you enjoying not having to worry about this yet?

BEAL: It's a little bit of both because I have a high metabolism so I don't really gain too much weight, but at the same time I still have to eat healthy because that contributes to your health and how you perform on the court. I've definitely changed, though. I'm not eating as much pizza and chicken as I used to. I still have my moments where I sneak in some meals here and there, but I think nutrition is definitely a big thing. 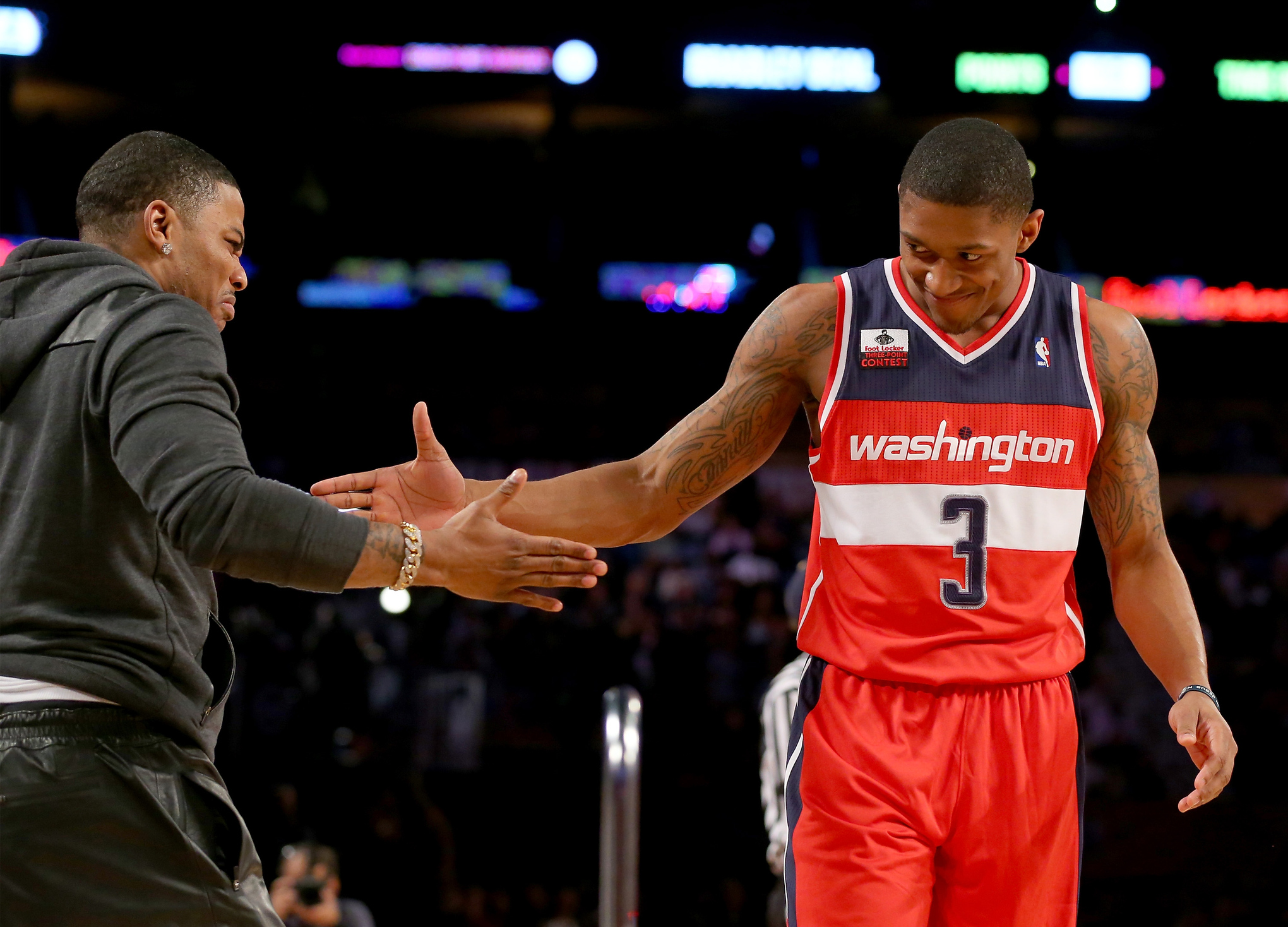 SBNATION.COM: On draft night, I remember seeing your parents and brothers in the hallway while you were going through your media circuit. Your brothers had a basketball and were dribbling it through the hallway while your mom tried unsuccessfully to get them to stop. You've talked before about how close you are to your brothers. What's it like to experience all of this with your family around you?

BEAL: It's always great. I'm the only one in my family to actually make it to this level. They all look up to me, even my older brothers, which is kind of unique. Just having that support system behind me it means a lot to me because not a lot of people have the same support that I have. My small circle is really just my family. They're really close and dear to my heart and it's always great to have them watching my games, critiquing my games and making sure I'm alright at all times.

SBNATION.COM: You've said that your mom is your harshest critic. What's her most common critique of your game?

BEAL: My shot for sure. She taught me how to shoot so she's always on my head if I'm missing shots or not doing something right. She's always correcting me. My phone is probably blowing up right now with text messages from her (laughs). But it's great to have her always caring for me no matter how old I get. No matter what level I'm playing at she always has my back and makes sure I'm doing the right things.

SBNATION.COM: One thing I appreciate about you is that you don't pretend you grew up watching Chicago Bulls Michael Jordan, unlike a lot of other guys from your draft class. Who were the guys that were big for you growing up?

BEAL: I grew up watching Allen Iverson and then eventually LeBron.

BEAL: It's cool. Just the fact to see how good of a player he really is and it challenges me to try to beat him. He's definitely someone I idolize but at the same time I want to compete against him and try to be better than him one day. It's always great to be playing against someone you looked up to growing up. At the same time I don't let him know that, because it would be kind of weird if I did.

SBNATION.COM: How do you prepare for each opponent or learn a player's tendencies on the floor?

"I watch film, but I try to go off instincts"-Bradley Beal

BEAL: We have scouting reports and we have film. I watch film, but I try to go off instincts. Now I've played against these guys a few times so I kind of know what their tendencies are throughout the game. It also depends on their mood throughout the game, because they're not always going to do the same move every time. So I just try to go off my instincts and try to react to whatever they do.

SBNATION.COM: When did you realize this could be your career and not just a game that you loved playing?

BEAL: It actually kind of hit me like a week ago. I realized, ‘Wow, I actually play basketball for a living.' It's pretty cool, man. The fact that I'm 20 years old and not in school, all I have to do is play basketball and get paid for doing it. Everything's just at the tip of my fingers. It's a great feeling, but at the same time it humbles you. Makes you want to be thankful for what you have and what you've been blessed with and continue to work hard to become more.

SBNATION.COM: What made you have that moment of reflection?

BEAL: It was just me sitting back one day, thinking about what I've accomplished in my life so far. Just...where I came from. My city, my state, high school and college. Who knew I'd be in the NBA at 20 years old?

SBNATION.COM: Is it also something you realize when you see those friends from high school or college who are not doing this?

Is Beal being used poorly?

The Wizards are asking Beal to handle a ball a lot, but does it suit his strengths?

How Beal broke out

Our profile of the 20-year-old Wizards shooting guard from last season.

Is Beal being used poorly? How Beal broke out

BEAL: Yeah, but I think the best thing I have when I'm talking to my friends is that they still see me as Brad they knew from before. Nothing changes in their attitude, and our mindsets and how we communicate and talk and everything. It never changes. That's what I love so much about my family and friends, man. They continue to support me at the same time they keep me grounded and talk to me like I'm with them.

SBNATION.COM: Do you think some of that comes from how your parents raised you? You've mentioned how crucial they have been with respect to who you are today.

BEAL: For sure, I definitely give credit to them, and my grandparents too, because they raised me that way. They made sure I was always on the right path, made sure I was humble and made sure I always continued to give thanks to God and making sure I give back to my friends and family and community.

SBNATION.COM: What's the hardest part being an athlete that people don't think about or consider on a day-to-day basis?

BEAL: From the outside looking in, they don't see the behind the scenes things. You've got to do a lot of media, you've got to train all the time, eat right, play back-to-back games, you could play four games in five nights. They really don't know how tired you can get or how much energy and effort you have to put into working out and being the best you can be.