Pounding Sand: Driving a Mini All4 in the desert

Doug Gillett takes a spin through the Mojave Desert with a Mini All4 -- the car that won the last Dakar Rally -- and finds out just how hard it is to battle vehicle and sand.

Share All sharing options for: Pounding Sand: Driving a Mini All4 in the desert

The shit is the soft, powdery sand at the base of the Dumont Dunes in the Mojave Desert, and I am the one who has put us there, at the wheel of the very same Mini All4 Racing rally car that won the last Dakar Rally in much more capable hands. In mine, we’ve ended up facing the opposite direction from where I thought I was steering, and if the 4200-pound car sinks much further into the sand, someone’s gonna have to come pull us out.

Périn shifts the car into reverse and tells me to back out: I stall the car. On the next attempt, he orders more gas, so I slam the car to redline just long enough to hear "Nononono!" in my headset. Finally I find a happy medium, the car scrambles backward, and we’re free.

"OK! Now we go," Périn says, upbeat and patient to the end.

The line between "patient" and "glutton for punishment" is a fine one, and at times it’s difficult to tell on which side of it navigator Périn and driver Joan "Nani" Roma fall. The "raid"-style Dakar Rally is basically an entire World Rally Championship season crammed into two frantic weeks — thirteen days in which they may spend as many as 12 hours a day crossing some of the least car-friendly surfaces on earth.

Naturally, they are not relaxing hours. The Mini is a furious rock-polisher of a car, to the point where Roma and Périn’s conditioning regimen includes extensive neck exercises just so they can hold their heads steady enough to read the instruments and logbook. It’s also incredibly hot in there — "fifty, sixty degrees," Périn estimates, and nobody’s impressed until they realize that, as a Frenchman, he means Celsius. 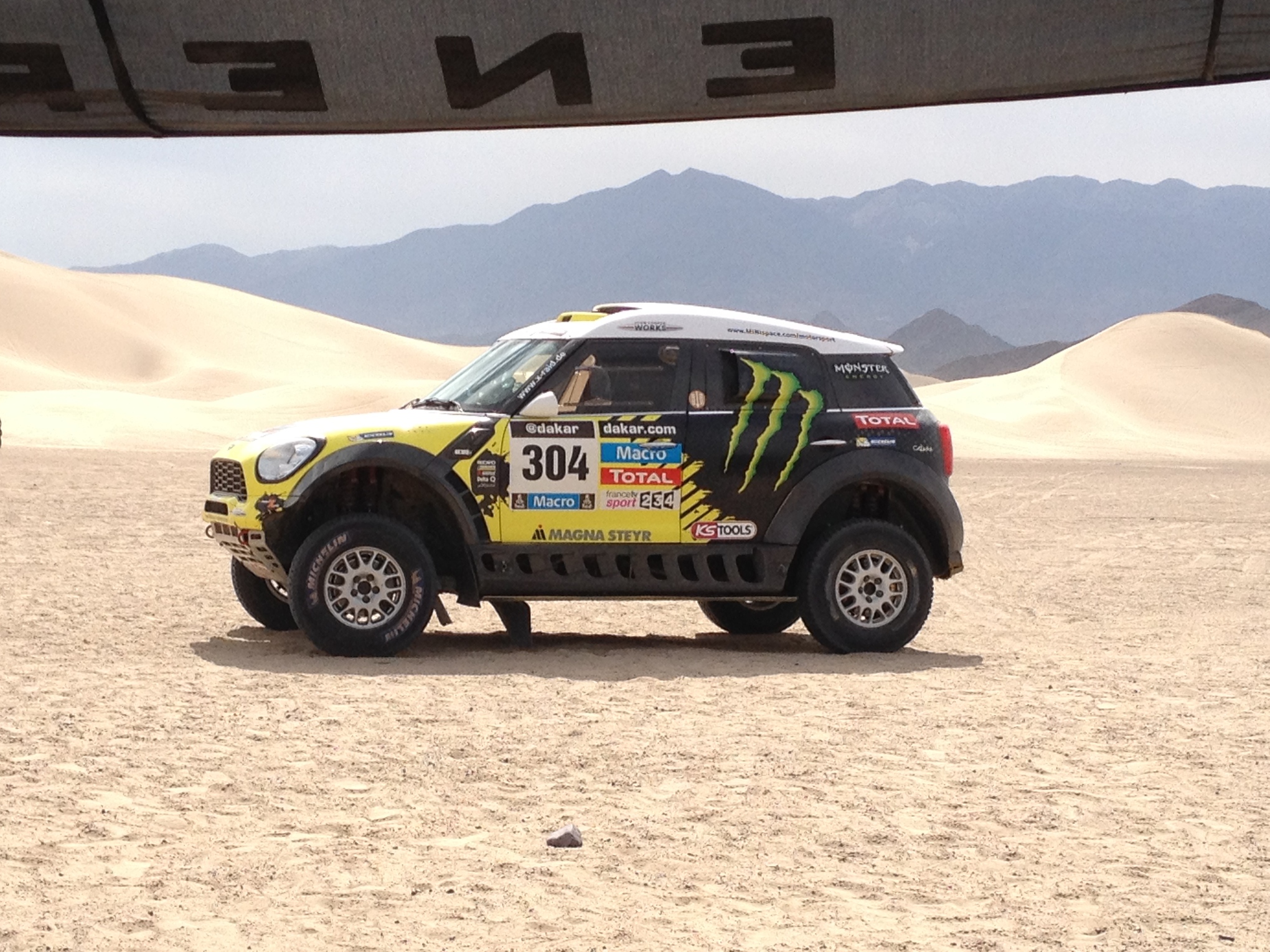 And that’s just inside the car. The real danger on the Dakar comes from what’s outside — or, rather, what isn’t. "In Africa, you are alone," says Nani, who won the event’s motorcycle-class title back in 2004 when it was still the Paris-Dakar Rally. "Nobody’s there. When you have a problem, you’re stuck in the dunes with nobody to help you."

"In Africa, you are alone. When you have a problem, you’re stuck in the dunes with nobody to help you."

Just as the Big Twelve no longer has 12 teams, the Dakar doesn’t actually go through Dakar anymore, much less Paris. The rally was cancelled entirely in 2008 shortly after four French tourists were murdered in Mauritania and al-Qaeda declared that the racers might be next. Since 2009, the race has found a friendlier political climate in South America, but not a friendlier landscape — last year’s route combined the rugged plains of Argentina, the Andes peaks of Bolivia, and the Atacama Desert of Chile, the driest place in the world. It was on this route, in Argentina, that Belgian motorcyclist Eric Palante died of as-yet-undetermined causes. And while such deaths may be the exception these days, when your blood type is indicated on your car hood and racing suit — as Roma’s and Périn’s are — it’s a tacit admission that you’re still taking your life in your own hands.

As for the eight journalists getting a turn behind the wheel of the All4? Well . . . we’re not, really. We’re only about 60 miles southwest of Las Vegas, with an ambulance from the Baker, Calif., EMS at the ready. And as we’ll soon find out, none of us have the driving skills to even flirt with the Mini’s limits.

But even at five or six tenths, we quickly realize that rally drivers actually have to master two things at once: the car and the surface beneath it. On sand, every inch is a negotiation — you declare what you want the car to do, the shifting sand makes a counter-offer, and the end result is somewhere in between. For that reason, even when you’re driving in a straight line, you’re never actually driving in a straight line. The car fidgets beneath you like a 4-year-old in church, always reminding you how willing it is to pivot about its central axis and point you in some unexpected direction — the one that dumped me off in "the shit" earlier, for example.

And yet, in a rally car, just go faster is the solution to a surprising number of problems. As we skirt the crest of some of the lower dunes, the car, banked at a nearly 45-degree angle, feels as though it could barrel-roll down the side at any moment. So we have to make sure the car’s forward momentum beats the sideways — which means a stab on the gas pedal, a gust of black diesel smoke, and a growl from the engine that sounds like one of those vicious little dogs who’s unconcerned with how small he is. Which, for a Mini, is kind of perfect.

The Mini’s proud rallying history goes back almost as long as the Mini has existed. Roma and Périne won the Dakar nearly 50 years to the day after Paddy Hopkirk’s statement victory in the ’64 Monte Carlo Rally behind the wheel of a more-or-less stock Mini Cooper.

Hopkirk probably wouldn’t know what to make of the All4 Racing that we’re tossing around in the desert, which is anything but stock. Developed by German firm X-raid, it looks like a Countryman after a south Georgia good ol’ boy got to it: jacked-up stance, extra bodywork, cartoonishly big 245/80R16 tires. And then there’s the engine, derived from BMW’s 3.0-liter turbodiesel. This version cranks out 700 pound-feet of torque at just 2100 rpm — nearly as much torque, and at nearly as few revs, as the Ford Power Stroke V8 at less than half the size. That, more than any heroism on my part, was what got us out of the shit earlier.

This is the car’s first visit to North America, as well as the first time Mini has let "civilians" get behind the wheel. At first it seems strange that they’re risking a $1.1 million race car in the hands of a bunch of random journalists. But paradoxically, with our meager skills, we don’t actually have enough ability to do any real damage.

This will become apparent at the end of the day, when we each get a "taxi ride" with Nani at the wheel — and find out just what the car is capable of in an expert’s hands.

I only drove the car. Nani flies it.

This is not entirely an exaggeration — the dunes at Dumont are a few hundred feet high, and Nani wastes no time rocketing us to the top. It’s like that first gargantuan climb on a roller coaster, only much faster, and without the equally huge plummet right after. Instead, Nani dances the car along the crest of the dune, hopping from one side of the ridge to the other and daring gravity to intervene. If it weren’t for the punishing ride, the car would feel like a fighter jet as it banks and drifts high above our base camp.

And like a fighter ace, Nani knows exactly where the car’s limits are and how to stop just short of them. Whereas I feared the reaction of the unpredictable sand beneath our tires, he anticipates it, and is right on the money just about every time. The only time he even hints at being caught off guard is when he murmurs "Whoaaa" as we slide sideways down the massive slope, but by the time we reach the bottom the car’s pointed straight ahead again, catching air as it surfs the smaller dunes.

Oh, and that sharp right-hander from earlier, the one that spun me into "the shit"? Nani barrels toward it at twice the speed, leans into the brake at just the right time, and drifts around the bottom of the dune as easily as you or I would pull into a Wendy’s parking lot.

So that’s how you do that, I think.