Mike Evans is one of the top receivers in the draft. Can the Texas A&M standout learn to channel his temper to be productive in the NFL? Retired NFL defensive end Stephen White breaks down Evans' game.

Share All sharing options for: The Notebook: Can Mike Evans balance passion & volatility?

For my money there are two wide receivers in this draft vying to be the first at their position off the board. I already broke down former Clemson wide receiver Sammy Watkins. Now, I'm going to take a look at former Texas A&M wide receiver Mike Evans.

For the purposes of this breakdown, I watched Evans play against Alabama, Arkansas, Auburn, LSU and Duke. Those games represent the third, fifth, seventh, 11th and 13th games of Evans' season, respectively. (Thanks to Draftbreakdown.com for the video.)

At the combine Mike Evans checked in at 6'4, 231 pounds, which is pretty damn big for a wide receiver, but we've all seen bigger.

What I will say is that Evans seems even bigger on film. Like, the dude was physically imposing in every game no matter who he was matched up against. Not every block of his was a slobberknocker, but, man, when he got his hands on defenders things generally didn't end well for them. Even though he gets shaded about catching a lot of jump balls, as if that is something to be embarrassed about, I only tracked 12 throws his way that would qualify as catchable jump balls in my book.

And here's the really funny part ...

HE CAUGHT 1O OUT OF THOSE 12 PASSES INCLUDING THREE TOUCHDOWNS!!!

Hell, I will take that any day of the week if it was the only thing he could do.

He is also a decent route runner, finding some way to change directions with that tall frame as if he was a little 5'8 jitterbug. He also has such great feet up the sideline, rarely going out of bounds without being touched.

And, man, oh man, is he physical after the catch.

Not as physical as Sammy Watkins, but Evans didn't mind handing out a few flippers or stiff arms of his own.

Still, there was something about Evans physically that stood out to me on film, but I couldn't put my finger on it. Then, I checked the combine measurements and there it was. 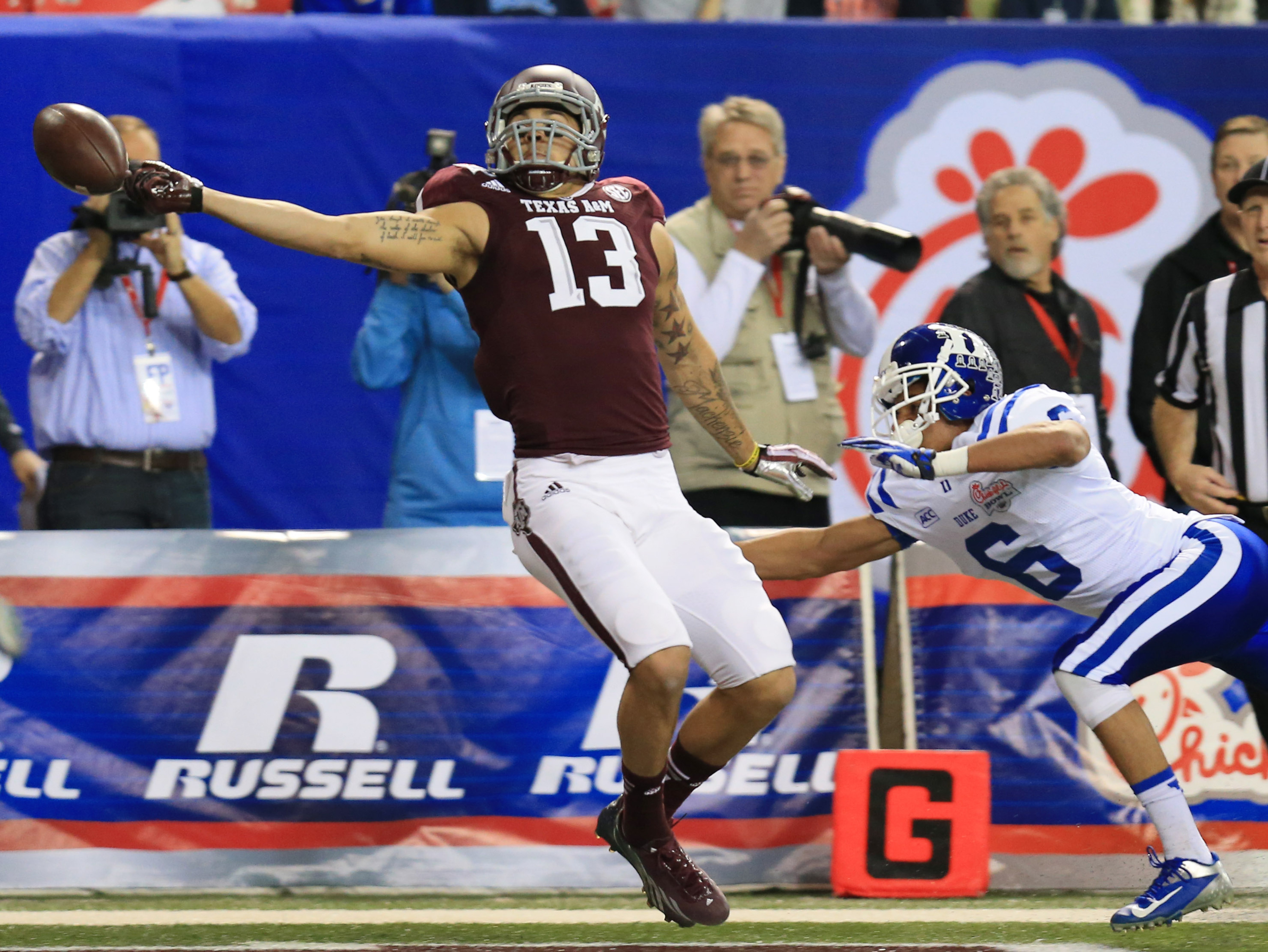 Talk about one hell of a catch radius!

Basically this guy is a create-a-player on a Madden video game. I know he has been compared a lot to Vincent Jackson, but I actually saw a lot of Terrell Owens (in various ways) in Evans watching these five games. He runs well after the catch, he blocks his ass off, he goes up and gets the ball and he wins most of his one-on-one matchups. The Jackson comparisons also seemed to have been somewhat of a pejorative, referencing the Vincent Jackson of late who gets caught from behind. However, if you remember the young Vincent Jackson out in San Diego, that comparison is more apt and actually a good thing.

Did I mention he's fast?

I see people questioning his speed. His 4.53 time in the 40 at the combine is good, but not exactly blazing. However, I see Evans getting open downfield a couple of times in most of those five games. Not all of the throws were on the money, but it's not like Evans didn't "Moss" a few cats this past season either.

Nobody will mistake Evans for a young Randy Moss, but I don't have concerns about his ability to get open down the field. If anything, I hope whichever team he goes to likes to take shots down the field and has a quarterback who can get it to him on target. Should make for some fireworks on Sundays this fall.

Evans has everything you need in a wide receiver.

Evans had a propensity to draw stupid penalties in the games I watched. A few times he had a point about being interfered with, but you can't have a guy lose control like that in the middle of a game. It's a major distraction and stupid penalties can cost a team games.

Basically this guy is a create-a-player on a Madden video game.

I never saw Sammy Watkins lose his composure in the games that I watched. Not once. Guys who are that selfish make general mangers nervous about taking them that high. That's with good reason because it's likely that a guy like Evans will struggle at some point his rookie season and maybe even longer than that. How they react to adversity will have a major impact on how their career ultimately plays out.

Sometimes it's better to be pissed off than ...

There was an upside to Evans' temper. When he got mad he tended to go a little harder on his blocks. For as much as people may remember his bowl performance for the two personal foul penalties (on the first one I thought his arm was indeed pinned by the defender; the second was just a bad call), I remember him more for the pancake blocks that followed.

If he can channel his energy that way, the sky is the limit for Evans.

And the winner by a nose

I had a lot of fun watching both Sammy Watkins and Mike Evans play for these breakdowns. Both guys had some truly fantastic plays and both guys are special talents.

For me, I would have to go with Watkins over Evans on my board. Evans is more physically imposing, and both have great hands (for all the talk about Evans' drops I only counted two and a possible third in those five games). However, Watkins is more dynamic in terms of the things you can do with him. 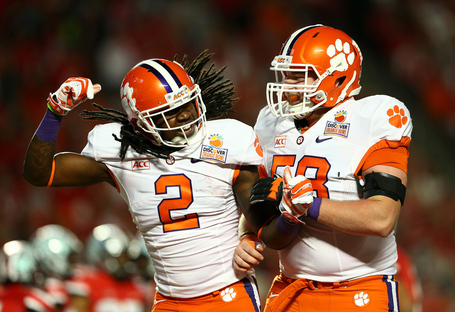 Clemson moved Watkins all over the place to get him the ball, including in the backfield. Evans was the outside receiver on just about every play that I watched. Evans won't be a return guy and probably won't be a reverse guy either. They are about even as wide receivers, but Watkins has the edge as far as versatility.

Then there's the mindset deal. I love Evans' passion for the game, but I want a guy who is even-keeled when I'm taking a wide receiver in the top 10. That gives the player a much better chance of not crashing and burning before he ever reaches his potential. Having seen T.O. lay waste to several teams in his wake, even though he was productive, teams haven't forgotten that.

I think with the right position coach, one who won't stand for any of his shit, Evans is going to be a fantastic player. For me, I'm going with the safer choice in Watkins if I have to make a pick between the two. Besides, Watkins is a fantastic player in his own right.

*In the interest of full disclosure, I would like to point out that my ex-teammate and friend Anthony "Booger" McFarland owns the gym where Sammy Watkins trained to get ready for the combine. Nothing about that relationship influenced this breakdown, however.