McDonald's All-American Game: Big men reign in the class of 2014

Share All sharing options for: McDonald's All-American Game: Big men reign in the class of 2014

CHICAGO -- A year ago, the central characters at the McDonald's All-American Game were already name brands before most of the basketball viewing public had ever seen them play.

Jabari Parker was on the cover of Sports Illustrated 10 months prior. Andrew Wiggins essentially got rich off a mixtape and vaulted Parker in the prospect rankings the moment he reclassified. Dallas forward Julius Randle had just committed to Kentucky and might have been better than both of them, depending on who you were talking to.

If the first practice of the 2014 McDonald's All-American Game was missing anything Monday afternoon at Attack Athletics on the Chicago's west side, it was that vague, undefinable sense of hype that lorded over the proceedings a year ago. There is still plenty of talent here, it is just in a different shape. Last year's class had wings tailor-made for YouTube. In 2014, the Burger Boys are defined by the big men.

In a sense, big men have never been the sport's best draw. Highlights on SportsCenter show dunks and three-pointers, not stout interior defense or crafty post play. But when it comes to, you know, winning, there's nothing like a dominant physical presence on the interior. College basketball is going to be rich with very good big men next season.

You can start with Jahlil Okafor, the 6'10 Duke commit from Chicago who has sat atop the class rankings for most of his high school career. Okafor accomplished just about everything a high school player can, winning the state championship in Illinois last week and being named the national Player of the Year at a McDonald's banquet days later. You can be sure the Blue Devils wish they had him this year.

Duke's season, the one that just ended in the first round of the NCAA Tournament against No. 13 seed Mercer, serves as the perfect example for the importance of big men. Coach K started Parker, a natural small forward, at power forward, and Amil Jefferson -- at 6'9, 210 lbs. -- at the five. The Blue Devils' loss to Mercer was a microcosm of their season. Duke hit 15 three-pointers at a 40 percent clip, but could not stop Mercer from getting layups at the rim again and again. If Duke had any type of interior presence, they may still be dancing. 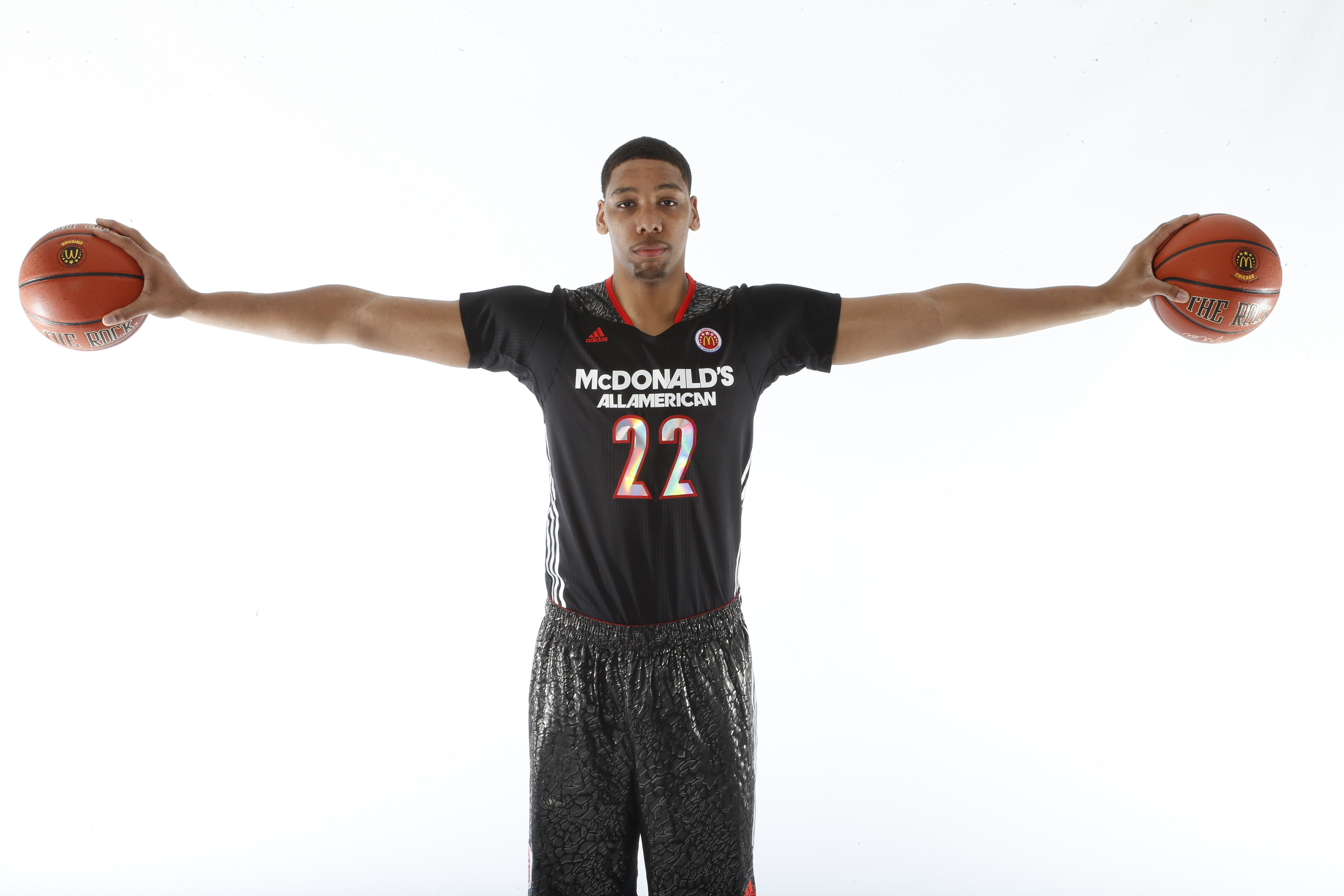 For as huge and skilled as Okafor is, some don't even consider him the best big man in his own city. That's where Cliff Alexander comes in, a 6'8 power forward who is headed to Kansas. Alexander lacks Okafor's polish but makes up for it with boundless energy and explosiveness. If Okafor has the footwork and touch to score on the block at the next level, Alexander has the strength and the hops to finish lobs and putbacks at the rim like a man playing against boys. It's fitting that Alexander has the face and body of someone 10 years older.

Okafor and Alexander dominated Chicago's competitive city league by virtue of their shear size. They won't enjoy the same advantage at the McDonald's Game. Alexander learned this the hard way in practice Monday when he continuously struggled to score against his teammate on the East squad, Karl Towns.

Towns is a legitimate 7-footer headed to Kentucky next season (as if the Wildcats needed even more elite size). Say what you will about Kentucky coach John Calipari, but the man knows what he's doing.

The player you will love to hate

Because his mother is Dominican, Towns played on the Dominican Republic national team in the 2011 and 2012 FIBA tournaments, where he was coached by ... Calipari. Cal has had a surplus of talented bigs since he arrived in Lexington, and Towns has all of the tools to be as good as any of them. Part of a four-man class at the McDonald's Game that's going to Kentucky next year, Towns is noted for his face-up game as much as his size. The center has range out past the three-point line and is considered an advanced passer out of the post. In the dunk contest on Monday night, he threw down a windmill while blindfolded.

Towns will have company in Lexington with Trey Lyles, the next player in Canada's incredible talent pipeline. The media packet hilariously says Lyles compares his game to a combination of Tim Duncan and Carmelo Anthony. While such a mythical creature may never exist, the 6'10, 240-lbs. forward has showcased a strong face-up game, good awareness in the paint and the length to protect the basket on defense.

Out of all the talented big men at the McDonald's Game this year, the only one who remains undecided on a college choice arguably projects as the best NBA prospect. Myles Turner arrives via Dallas at 6'11, 230 lbs., and is drawing comparisons to another Dallas native, LaMarcus Aldridge. He's going to be a tremendous defensive player wherever he decides to make his college pit stop, and his post game and jumper are already at a good place.

High-flying wings steal headlines and inspire viral videos, but there's nothing more rare than a big man who can make an impact on both ends.

Whatever this year's class at the McDonald's Game lacks in style, it makes up in substance. Nothing here is going to get people as excited as the prospect of Wiggins soaring to finish an alley-oop, but there's a reason Wiggins isn't considered the best pro prospect on his team by many talent evaluators. That would big Joel Embiid, the Cameroonian 7-foot center who was absent from the McDonald's Game last year.

High-flying wings steal headlines and inspire viral videos, but there's nothing more rare than a big man who can make an impact on both ends. If the McDonald's Game is any indication, college basketball will be flush with talented post players next season.