The new R.B.I. Baseball is here, and it tries to appeal to both old and new fans. That's a problem.

Everything I've ever experienced is better than whatever you've experienced.

This is true for the concerts I've seen, the movies I've enjoyed, the parties I've been to. Every one, man, wish you could have been there. Wish you could have enjoyed it like I enjoyed it. Whatever movies/books/songs/school-related experiences/comic books/video games/cars/pop culture events/sports I've experienced are better than whatever was around when you were coming of age. There's no sense arguing. It's an empirical truth.

When we found out they weren't short and fat dudes

There was mild panic. We were promised a time machine.

When we found out they weren't short and fat dudes

All of us believe this on some level. This is why nostalgia exists, and it's why there's a market for nostalgia.

This is why R.B.I. Baseball '14 exists. At least, that's the only reason I can come up with. It's a baseball game that tries to be all things to all people, catering to the nostalgia-fetishists, while also hoping to snag younger fans. It's a Jack Cust of some limited trades, master of none. It's not a bad game, but there isn't a great reason for it to exist in its current form, either.

I played the downloadable PS3 version (it's available on XBox 360 and iOS, too), and the graphics are new-school, with everyone from Pablo Sandoval to Bartolo Colon looking like a tall, chiseled athlete. This is a game for iOS as much as it is for consoles, so the graphics couldn't be too fancy, but while they're not exactly next- (or last-) generation graphics, they're clearly modern graphics. The short, fat dudes are gone. Repeat: the short, fat dudes are gone. 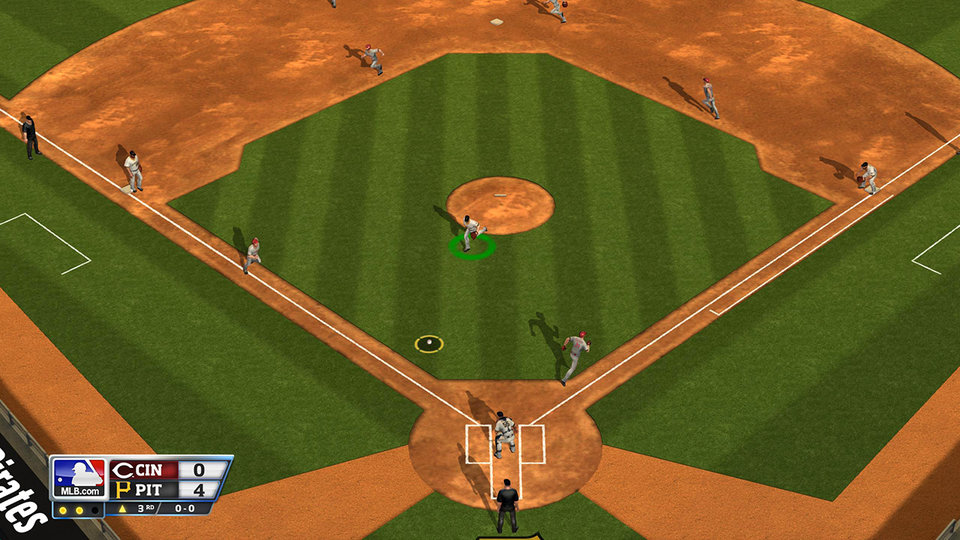 A lot of the gameplay elements are intact, though. Before the pitch, you can move the batter around in the box like a department-store mannequin on casters, zipping around to find the best angle of attack. That's good, because the pitchers still have the ability to control the flight of the ball mid-air, with every pitcher featuring a cutter and two-seamer of the gods. The offspeed pitches waggle like a hyperactive knuckleball, and every other one, it seems, completely drops to the ground, under the two-dimensional swing.

That's R.B.I. Baseball, alright. There are three starting pitchers on each team and one reliever. The starters tend to get tired around the fourth or fifth inning, which leads to a lot of piggybacking. Cliff Lee becomes a super-reliever. Yep, that's R.B.I. Baseball, too. You didn't complain about those things back in the day; it wasn't exactly part of the charm, it was just part of the R.B.I. Baseball universe that you had no choice but to accept. Every sports game was going to have flaws because of the limitations of the technology.

Today, though, the competition isn't burdened by those expectations. When I come up with a list of flaws in the MLB: The Show series, they boil down to things like "Pitchers throw strikes 70 percent of the time instead of 60," which are problems you can adjust in the settings. The Show series has been an incredible leap forward in realism. When you're dealing with a Clayton Kershaw curveball, you know it. When you're facing a Craig Kimbrel fastball, you know it. Those games aren't short, fat dudes hitting inside-the-park homers twice a game.

When modern gamers play The Show, they aren't saying, "It's an okay game, I guess, but I wish it were a little more unrealistic. I'd love it if the second baseman and right fielder moved like synchronized swimmers, and I couldn't control either of them individually." That's not why people fire up an emulator and play the original Nintendo games. And it's not just knee-jerk nostalgia for the sake of nostalgia that still makes the original R.B.I. great. It's a familiar fun that we're looking for -- an instantly identifiable, consistent, and familiar fun.

R.B.I. Baseball '14 has some of that. The quasi-two-dimensional strike zone is still intact. The pitch is either going left or right, unless it's a successful drop ball, which doesn't announce itself until after you've started your swing. The gameplay mechanics feel familiar on that level, and the pitcher/batter match-ups feel true to the series, which is probably the most important thing to nail. It's why the game is still fun on some level. If the goal was something arcade-like that gamers could pick up and play brainlessly, it was something of a success.

it's not just knee-jerk nostalgia for the sake of nostalgia that still makes the original R.B.I. great. It's a familiar fun that we're looking for -- an instantly identifiable, consistent, and familiar fun.

There isn't enough of that familiarity, though. It's not just the graphics that are unfamiliar, but the general gameplay.  Yet there are still old-school flaws that prevent it from feeling like a next-generation baseball experience. The fielders don't move in sync like they used to, but that comes at the expense of cutoff men, which I don't think exist in R.B.I. Baseball '14 (at least that I can find). The speed of the batted ball doesn't quite match up with the speed of the runners, occasionally allowing the second baseman to beat the runner to first if he wants to. This was a plus for me when I was the Giants, and I got to pretend that Marco Scutaro was tagging Matt Holliday in the throat, but it's not the most realistic game on several levels.

The imperfections of the original are still there, then, but they're different imperfections. There are certainly far, far fewer imperfections than almost any other baseball game from previous generations -- you can finish a game with a reasonable, 5-3 final score, which would have been a minor miracle in almost any pre-PS3 game -- yet it's clearly not intended to be a simulator. It's supposed to be arcade-like, fun, a throwback to the original.

Bring *this* back with online play, and don't futz it up.

But it needs to appeal to the kids who don't care about the original, so the graphics need to be updated.

But it needs to appeal to the people looking for nostalgia, so the gameplay can't be completely unfamiliar.

But it needs to appeal to the kids, so it can't be completely ridiculous gameplay, which is what the original R.B.I. Baseball would have if it were released today.

The result is like an album designed to appeal to fans of bluegrass and death metal. It's an interesting curiosity for a few minutes, but not something fans of either are going to throw on all the time. The game is retro, but not really. It's a new-generation baseball game, but not really. It's alright. It's something fun to play a little if you have friends over on a regular basis, considering there's no online play yet. That's a huge flaw, actually, when you consider that most fans of the original game are in their mid-30s to mid-40s now. Ask someone in that age bracket how often they have friends over to play video games. I know it's been about 10 or 15 years since I have.

Instead, this is a game that might as well be named Baseball Superstars or Baseball Game 2: The Baseballing. The only reason we're interested is because it has R.B.I. Baseball in the title. If only they nailed the reason why that interested us so much in the first place.