Bubba Watson, Rory McIlroy highlight the best and worst of the Masters

The second round at Augusta was another day of good, bad, and ugly. Bubba Watson was the subject of much of the good, while Rory was on the other end. Some highlights from the second round and predictions for Saturday.

Share All sharing options for: Bubba Watson, Rory McIlroy highlight the best and worst of the Masters

It's moving day at Augusta National, and the field is chasing 2012 Masters Champ Bubba Watson, who played his best golf and overwhelmed the course on Friday. Bubba has a three-shot lead heading into Saturday's round, but Adam Scott, Jordan Spieth, and Fred Couples are lurking on the first page of the leaderboard. There's no Phil Mickelson or Tiger Woods, but the remaining 51 players, particularly those at the top, should provide another dramatic weekend at the Masters. Here are some highlights at the 36-hole mark.

For the second straight day, it's Bubba Watson and this time it's obvious. On Friday, I wrote that Bubba's bogey-free round was more impressive to me than the leader's, Bill Haas, just because of how un-Bubba and conservative it was, with no blemishes and a couple red marks on the gettable par-5s. 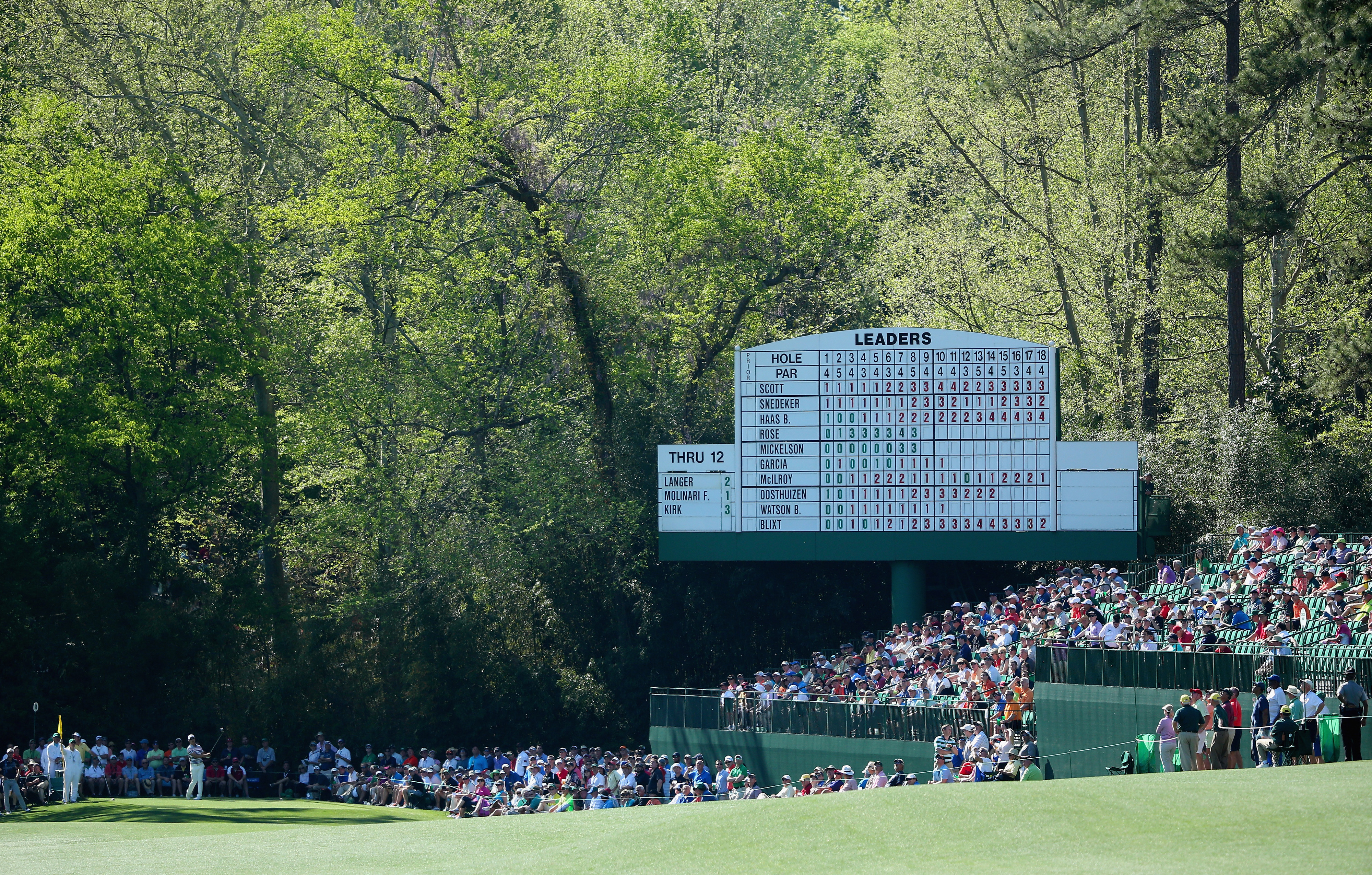 Friday was vintage Bubba -- the bombs off the tee, the shotmaking with his irons, and a sudden streak to bolt to the top of the leaderboard with a multi-shot margin. The birdie train from 12 through 16 will be the best stretch of golf played this week, by anyone. Every part of his game was working. He hit a bombed fade off the tee, stuck two irons on top of the cup at Nos. 12 and 16, hit a delicate chip at No. 15, and canned putts from every distance. Every club, every part of the game was perfect and it resulted in the 4-under 68. It looked very different than Thursday's round, but the result, for me, was the same and he's now had the two most impressive rounds so far.

The first-round leader, Bill Haas, certainly took a step back on Friday. Haas begin the day at 4-under following a flawless opening march, but he was quickly off the top of the board and finished 2-over following an ugly 78. Everything was well enough through the first nine, where he only dropped a shot. But then the wheels came off when he made the turn, playing the first four holes of the second nine in 5-over.

Haas was hammered by Amen Corner, and it started with a double bogey at No. 11. That's not an uncommon number on the hardest scoring hole on the course, but the trouble usually happens up around the slippery green bordered by water. Haas, however, misfired off the tee, and unfortunately for him, he wasn't left-handed and was forced to make a no-look back-handed shot just to get back in the fairway:

Tom Watson tried this earlier this year, and hit the flagstick from a greenside lie. Haas still had plenty of work to do and walked off with a double. There's a notion that Augusta favors lefties in the modern era, and it certainly would have helped here. This was just the beginning of an ugly second nine 41 to finish what I'm calling the worst round of the day.

There were so many to choose from during that Bubba birdie streak, but the putt at No. 14 has to be the best shot. It may have been a little lucky, sure, but it was the most unlikely birdie in the streak. This was just a bonus to keep the roll going.

The 14th is probably the one forgotten hole on the second nine, with all the others having a distinct identity and historic moments. But it should be known as the most extreme undulating green on the course, where getting close to the hole is almost impossible and making birdie is extremely difficult. Bubba needed to navigate some of these undulations with a crazy downhill bender just to pull off a good lag. Instead, he just drained it and you knew then he was about to run away on the leaderboard:

The shot on 16, which was a near hole-in-one, capped the streak and is a worthy nominee here but that pin placement is gettable and we see other guys funnel their balls down to the hole in the same manner. But no one was pulling off this putt again on Friday.

Rory McIlroy barely made the weekend, hitting a five-footer in the gloaming at No. 18 to be the last guy to make the cut. It was a second round of ugly shots and bad breaks for McIlroy, who will play by himself in the first tee time on Saturday. The round was headed in the wrong direction early, with a double bogey at No. 4 due to a wild tee ball that went completely off the course.

The fourth is a long par-4, so it's possible to rocket your tee shot over the green but this was nowhere close. Rory's ball went bounding through the hole, over the next tee box, and landed against a fence on the property where he'd have to take an unplayable lie and go back to the tee. The shot nearly took out Adam Scott as he was setting up to play No. 5:

Look out! After taking the unplayable, McIlroy actually did some great work just to get in with the double. But this was another instance where he visited a part of the property we didn't even know existed.

Rory was not sharp, but he was also incredibly unlucky. He had a chance to make a little noise on the second nine, maybe pick up a birdie or an eagle at Nos. 13 and 15 and at least get to the middle of the board. But that was all wiped out at the end of Amen Corner, when his second shot from just 165 yards landed square on the top of a sprinkler head and hopped into the azaleas behind the green.

He'd make a double bogey and from there it was a grind just to make the cut.

Weirdest incidence of history repeating itself

Fred Couples is a Masters legend. It may be the only major he's won in his career, but it was one of the most memorable and his cut streak, and ability to keep contending on the other side of 50, have made him a mainstay crowd favorite. On Friday, we got a near repeat of the most iconic moment of that legendary win in 1992, as he got another bit of good fortune on the banks of Rae's Creek:

The broadcasters and Twitter instantly lit up with incredulity at this near-identical bit of good luck. Couples would not get up-and-down to save, but he's again right there inside the top 10, thanks in part to the beneficial bank at No. 12.

Back to Rory's adventure at No. 13! That bounce off the sprinkler head was an awful break, but at least he got to wander among the beautiful flora of Augusta. He's in there somewhere trying to punch back onto the course: 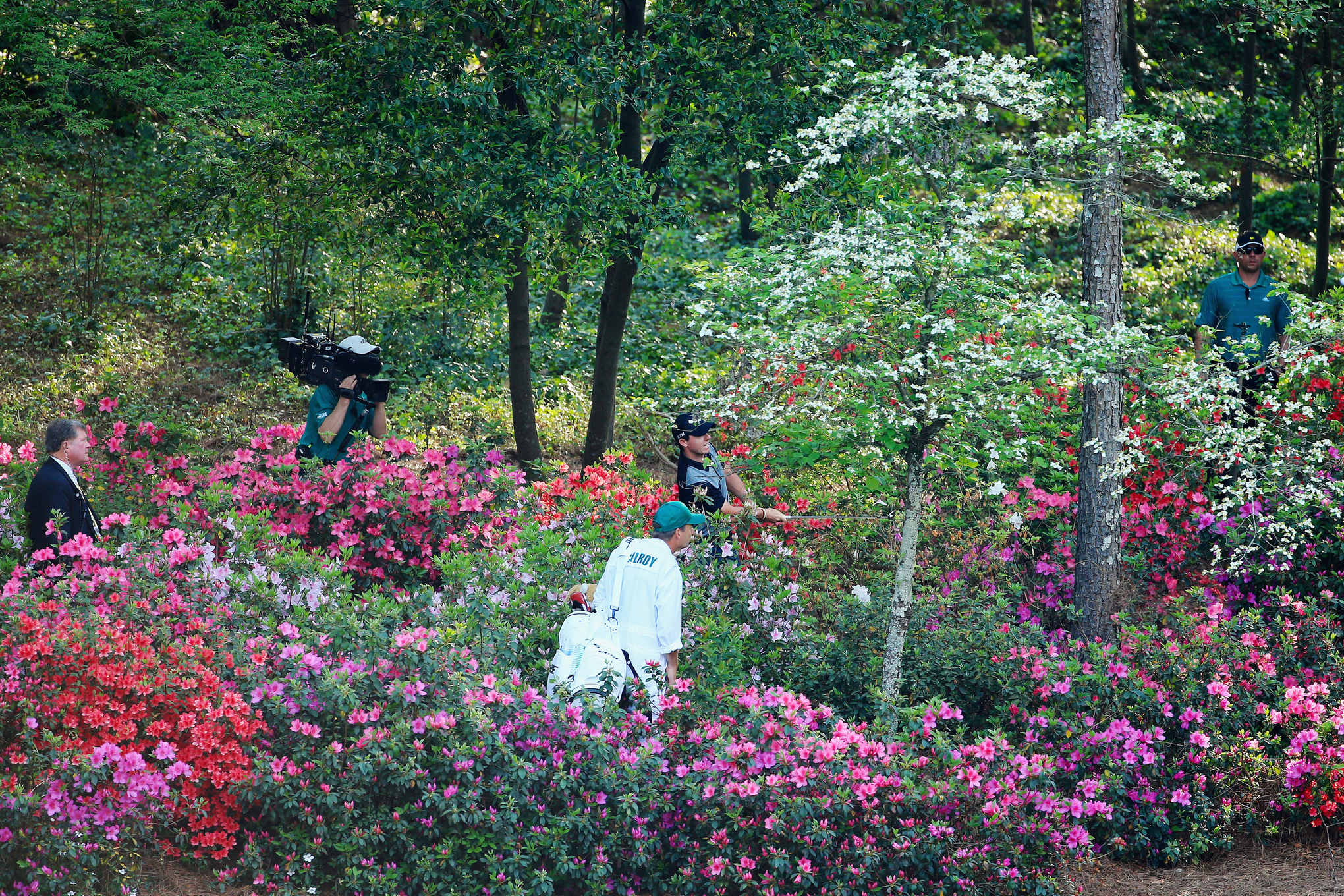 Predictions for Saturday's 3rd Round

It was this time last year that we were anxiously awaiting an announcement from Augusta on whether the game's biggest superstar would be disqualified for the weekend. Nothing can top that Saturday morning at Augusta, when commentators were calling for Tiger to DQ himself and parsing the rules and history of the game for context to an unprecedented moment.

This Saturday will have no such chaos, but I expect a leaderboard shuffle at the top. Here are some predictions for the second round:

We obviously don't have the Tiger mania of 2013, but moving day at Augusta is still better than a Saturday at any other tournament. And with stories like Bubba, Adam, Jordan, and Freddie, another eventful day of good, bad, and ugly is ahead.