The 10 most valuable pitchers in baseball

Share All sharing options for: The 10 most valuable pitchers in baseball

8. Clayton Kershaw (one year, $11 million, followed by one arbitration year)

10. Shaky last year, off to a shaky start this year.

8. The richest man in the universe, though he hasn't started a game this year (edit: in a game I was awake for).

6. Still excellent, but a year closer to free agency.

The sigh is because the injury gremlins started rummaging through Matt Moore's elbow, and he might have Tommy John surgery after partially tearing his UCL. When he signed his five-year deal, some critics were perplexed as to why he would do it and give up the potential nine-figure payday of free agency. This is why. Baseball is a game show that asks young players if they want to keep their guaranteed cash prizes or take what's in the box. Then baseball poops in every third box. The other ones are stuffed with cash! Don't pick the third box. Or, rather, don't let the third box pick you. 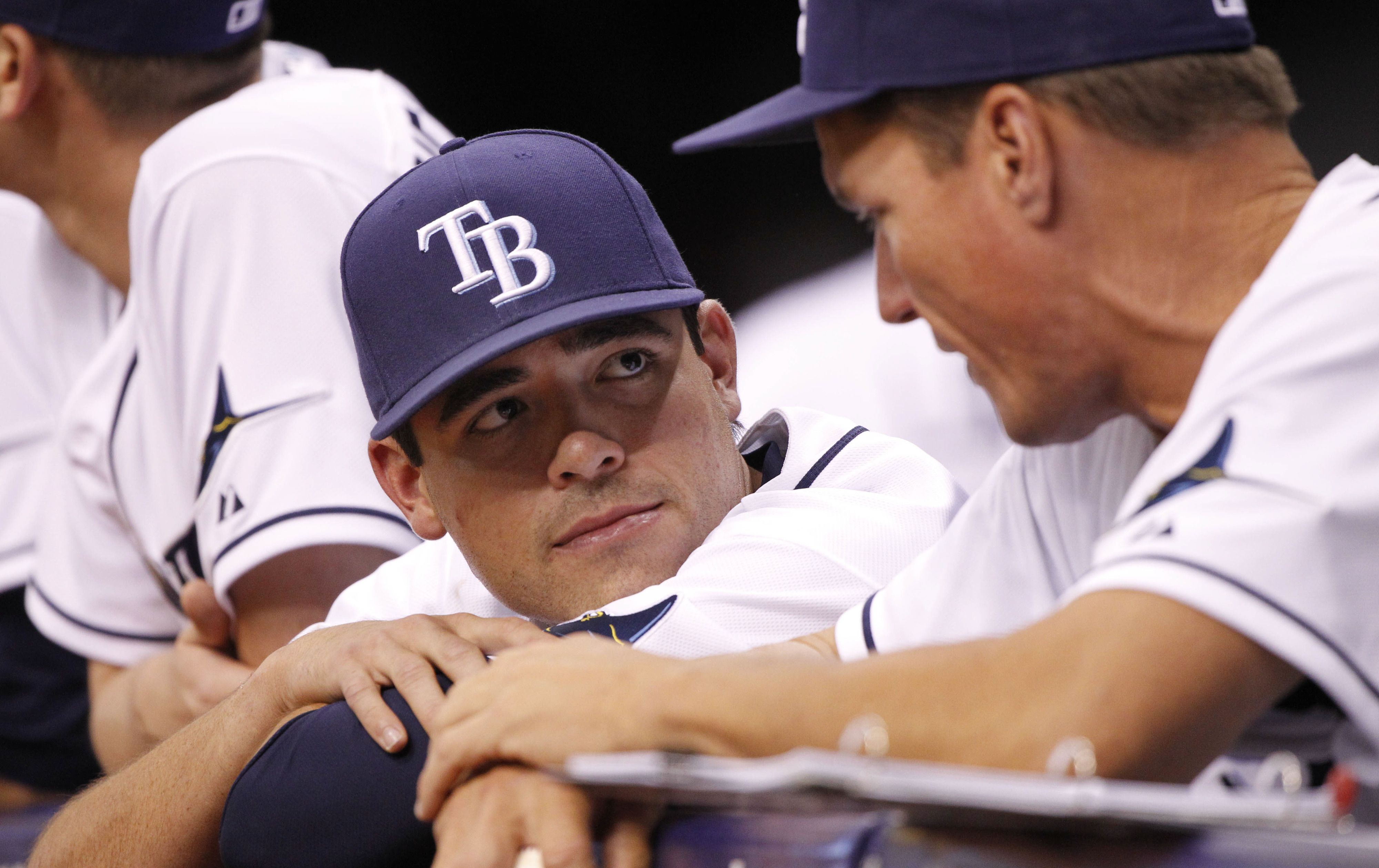 Most of the pitchers held their value, though. If their value decreased, it's because they're a year closer to free agency or newly-minted billionaires.

Ah, but the value of other pitchers skyrocketed around them. There were pitchers who emerged, or pitchers who added another quality season to their résumé, convincing us they should be considered. Matt Harvey went from off the list, to the top of the list, to possibly off the list. Dylan Bundy merited consideration last year, then the injury gremlins dragged him down by the elbow. There's a Yordano Ventura now, and he seems swell.

Let's learn from the mistakes of the past and try, try again. As a reminder, the following types of pitchers are generally considered for the "most valuable" label:

Matt Cain
Brilliant in the second half last year, but not the rock-solid guarantee he used to be.

Jered Weaver
Good, still, but at least a touch overrated because of Angels Stadium.

Clayton Kershaw
Can order two $5 sides of guacamole at the taqueria now, he don't care. Same goes for Justin Verlander, too. Nine-figure deals for pitchers are never going to help a team build a better team for the life of the contract. The Dodgers can afford it, sure, but the other 29 teams should assume that every pitcher eventually turns into Tim Lincecum.

Matt Moore - $9 million, 2014 - 2016; team options for combined $26 million, 2017 - 2019
If he recovers from his elbow injury well, he's still one of the better bargains in baseball. If he doesn't, he's guaranteed about the same as a year of Ervin Santana. The risk/reward is still off the charts, and that's assuming the elbow doesn't get better with rest and rehabilitation.

David Price - $14 million, 2014; one more arbitration year after
Still awesome, but under contract just through next year. 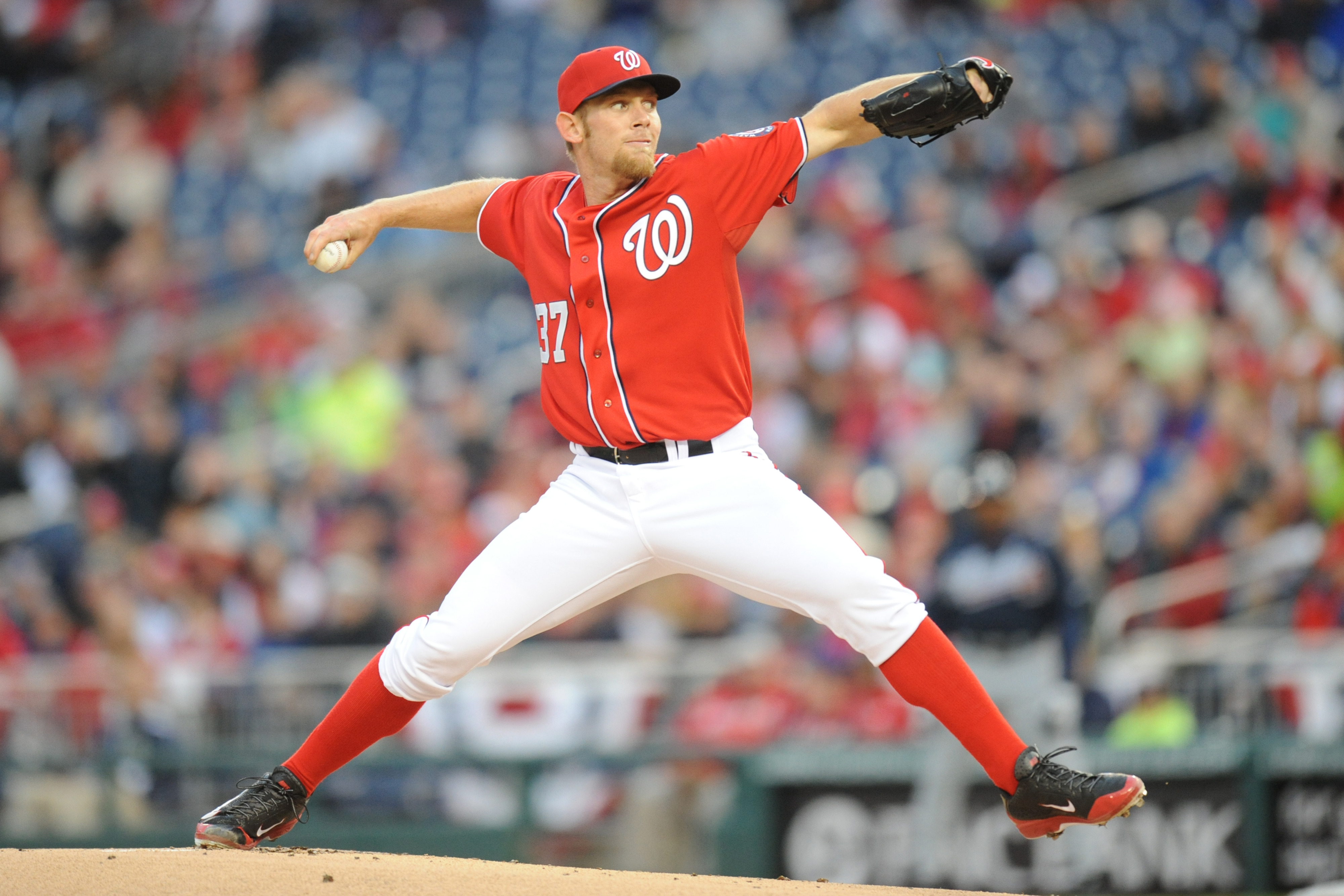 Stephen Strasburg has potential, but injuries have limited his time with the Nationals/Photo credit: Mitchell Layton

Gio Gonzalez - $31.5 million, 2014 - 2016; $12 million option in 2017
One of the better pitchers around and on a team-friendly contract, but he isn't coming off a Cy Young-caliber season like he was when the previous article was written. He at least needs to be reconsidered.

Stephen Strasburg - $3.975 million, 2014; two years of arbitration after
He has two arbitration years left after this season, so he's still relatively inexpensive, yet he hasn't cracked 200 innings or received a Cy Young vote in any of his three major league campaigns. Waiting around for his latent hyper-ace powers, while enjoying rotation-topping powers, is still a great deal for the Nationals, but as with Gonzalez, you can't just assume there aren't 10 better situations out there. He's on the bubble for now.

Yu Darvish - Four years, $41 million
Even though the Rangers still have to deal with his posting fee (or did, at least), I'm just looking at his current yearly salary. Which, considering how productive Darvish projects to be, is a relative steal. 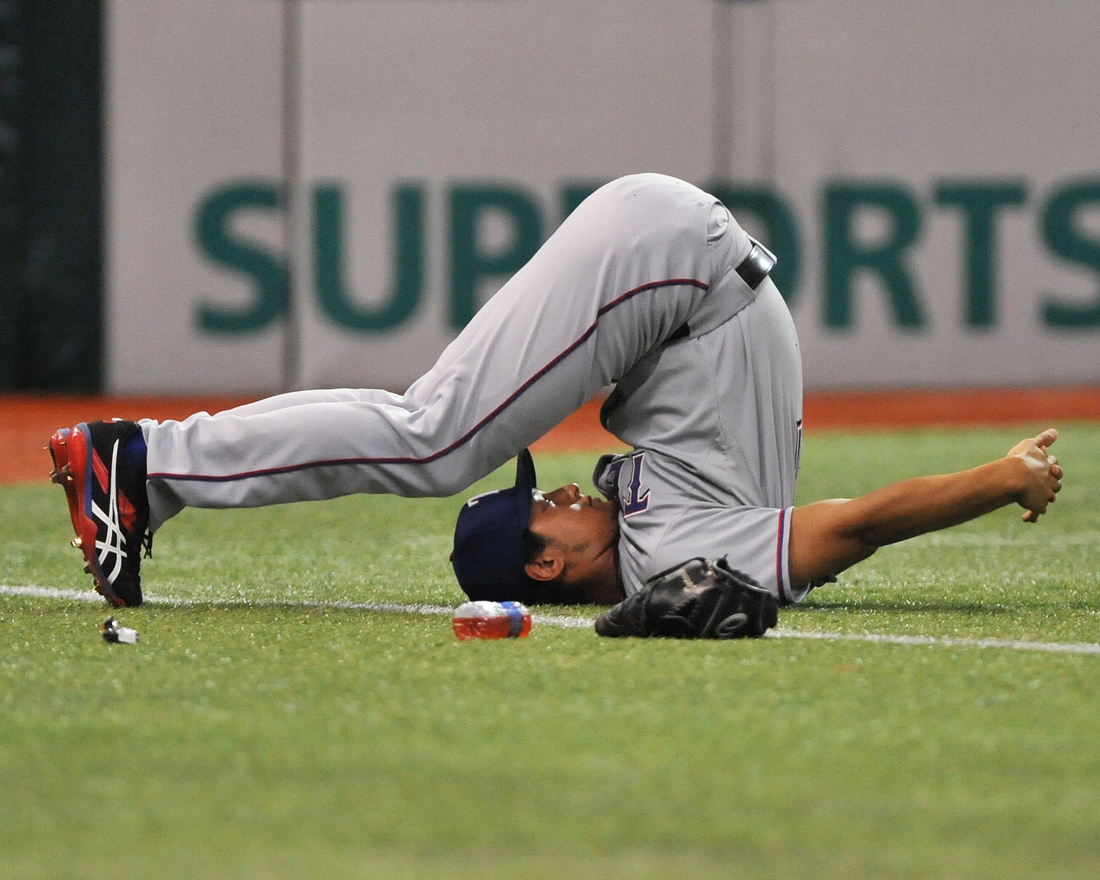 Even though the Rangers have to account for the enormous posting fee, Darvish's basic contract would give another team flexibility. (Photo by Al Messerschmidt/Getty Images)

Chris Sale - $30.65 million, 2014 - 2017, team options for combined $26 million for 2018 & 2019
The contract is almost identical to Bumgarner's, as if it were the clear comp presented to Sale and his agent. But Sale has been a little more effective, especially considering home parks. Then again, Bumgarner's delivery doesn't look like drumsticks wrapped in human skin and playing "Wipeout." So it's a tossup.

Hasashi Iwakuma - $6.5 million, 2014; $7 million option ($1 million buyout), 2015
One of the show-me cases from last April, he was even better in 2013. If Price can make the short list with two years left, Iwakuma certainly can, too, especially considering he's half as expensive.

Is it any good?

The new R.B.I. Baseball is here, and it tries to appeal to both old and new fans. That's a problem.

Is it any good?

Jose Fernandez - pre-arbitration; four arbitration years likely starting after 2014
Five more years of below-market prices make Fernandez an easy addition to the list and a contender for the top spot. Last year, I wrote about him as if the Marlins were crazy to start his salary clock early. Maybe, maybe not, but it's funny to think about what his minor-league stats would have looked like if he were in the International League for a few months last year.

Jose Quintana - $26.5 million, 2014 - 2018; team options for combined $22 million for 2019 & 2020
Creep can throw, man. Creep can throw. And if he stays as good as he was last year, this is one of the better deals in baseball. If he regresses a bit, just know that for the next seven years, he'll be paid less annually than Ricky Nolasco received on the open market. That means the White Sox won't have to panic when a Ricky Nolasco-type pitcher comes on the market.

Masahiro Tanaka - $155 million, 2014 - 2020; opt-out after 2017
Actually, I kind of dislike this contract because of the opt-out -- if he's good enough to earn this ace-like salary, he's going to use it. But if you think of it as a three-year deal for $70 million or so, assuming he's gone after 2017, it's a good deal, depending on how much you trust him and his whopping two-game major league career so far.

Hernandez's contract runs into the same problems as the other mega-deals, like Verlander's and Kershaw's, except Herandez is both younger (by three years) and cheaper than Verlander, and much, much cheaper than Kershaw, who also has one of those pesky opt-out clauses that can force the Dodgers to sabathiallocate more money to him against their better judgment.

Hyun-Jin Ryu - $28.2 million, 2014 - 2017
Last year, I wrote that Ryu was one of the silliest moves of the offseason. This is because I'm bad at my job, and I'm only writing here because my dad golfs with one of the venture capitalists who was deciding to invest in Vox  ... look, the details aren't important. Just know that I'm sorry and stupid and sorry.

The Dodgers clearly made one of the best deals of that particular offseason, and I'm guilty of reading too much into one spring start. Ryu is making Kevin Correia money, give or take, and he's producing like a front-line pitcher. Good thing, too, or the Dodgers wouldn't know what to do.

Matt Harvey - pre-arbitration for two more years; three arbitration years, 2017 - 2019
Technically broken, and some Tommy John pitchers don't come back (see: Jesse Foppert). But to pull an example from above, would you rather take the chance that Harvey comes back full strength with that contract, or have a guaranteed nine figures for Felix Hernandez or the same time frame?

Gerrit Cole - pre-arbitration, 2014-2016; three arbitration years, 2017 - 2020
Or do you just take Cole in that scenario? Remember when there was all sorts of talk about his low strikeout rate, and how it didn't match his stuff? Yeah. 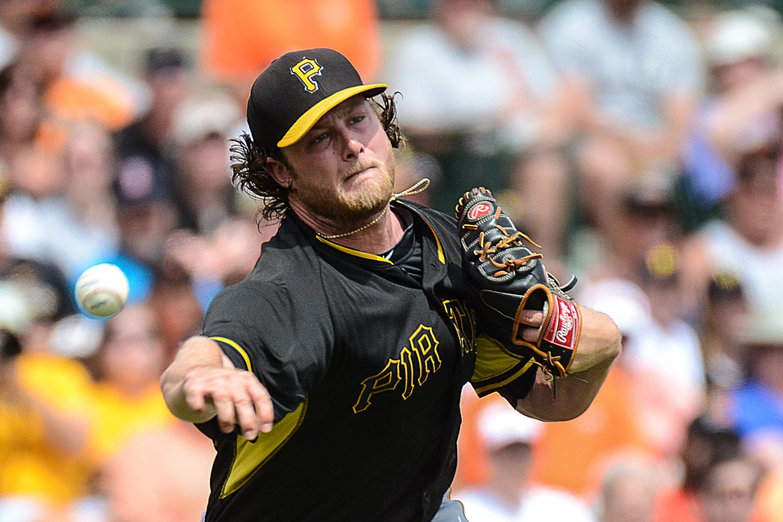 I have some concerns about his side-armed, off-balance delivery, though. (Photo by Jonathan Dyer-USA TODAY Sports)

Adam Wainwright - $97.5 million, 2014 - 2018
When Wainwright signed this deal, he was a season removed from Tommy John, and coming off a year in which he had a 96 ERA+. It was basically the Cardinals announcing to the world that they believed in FIP (or their own internal variation of it). And it worked. It probably saved them $50 million or more.

Me? I want the cheap (or relatively) cheap fellers, because that's how you end up saying things like, "Say, we really can afford that James Loney deal now!"

It's also worth noting that we're just not sure how good Chris Archer is, either. His ERA is shiny, but he pitches in the neo-Astrodome. He had a history of serious control issues in the minors, and it's kind of freaky that they disappeared, Randy Johnson-style, with major league experience. What if that's more mirage than development?

That written, that's a heckuva contract for the Rays. Even if Archer turns into Bobby Witt or something, the Rays will get their money out of it. And there is a ceiling. It might not be that much more than he's already shown, but it's still substantial.

Several rookies or prospects who will probably look like foolish omissions by July
Jose Fernandez didn't make the list last year, and I can't bring myself to list Yordano Ventura here, even though I would have liked to. I'm guessing Ventura will be worth more over the next six years than at least nine or 10 of the pitchers above. I can't do it without seeing one good season, though. Same goes for Noah Syndergaard, Archie Bradley, etc.

The revised list of most valuable pitchers in baseball for 2014:

Obviously I have a fetish for pre-arbitration years and cost control that, combined with faith in modern medicine, allows those last two to sneak on. The Rays don't even have a prognosis for Moore yet, but they'll figure it out.

Your definition of "most valuable" might vary. You might want the cost certainty of a Zack Greinke or Wainwright, and you're willing to pay a premium for them. Me? I want the cheap (or relatively) cheap fellers, because that's how you end up saying things like, "Say, we really can afford that James Loney deal now!" and then instead of a proven ace like Cliff Lee, you have an injured young pitcher and James Loney. You can see how that's more valuable all around.

Mostly, though, the question is "Would you trade #1 for anyone below him?" I wouldn't trade Archer to get King Felix right now, even though the latter is obviously a demigod. Money can be exchanged for goods and services, and those can help the team more than the difference between Archer and Felix.