The Pittsburgh Penguins have stronger offensive weapons, but could special teams and goaltending bring the Columbus Blue Jackets a first-round playoff upset?

Since their 2009 Stanley Cup win, the Pittsburgh Penguins have been a yearly favorite to win another championship, but have consistently fallen short for a variety of reasons -- injuries, goaltending (both theirs and the oppositions) and at times even a little bit of bad luck. After four straight playoff exits, including two in the first round, the pressure is on more than ever to get back to the Stanley Cup Final.

That path starts against an upstart Blue Jackets team making just its second playoff appearance in franchise history, and its first since 2009. Only four players remain from that team: injured forward R.J. Umberger, Fedor Tyutin, Jared Boll and Derek MacKenzie.

For Columbus, this isn't so much about winning the whole thing, but instead taking a major step in the building of a franchise that's taken longer than was originally hoped -- and maybe even building a natural rivalry with a team that is separated by just a couple hundred miles of interstate. Heck, it's about winning the first playoff game in franchise history.

It's going to be a challenge for the Blue Jackets, and maybe that's a good thing. 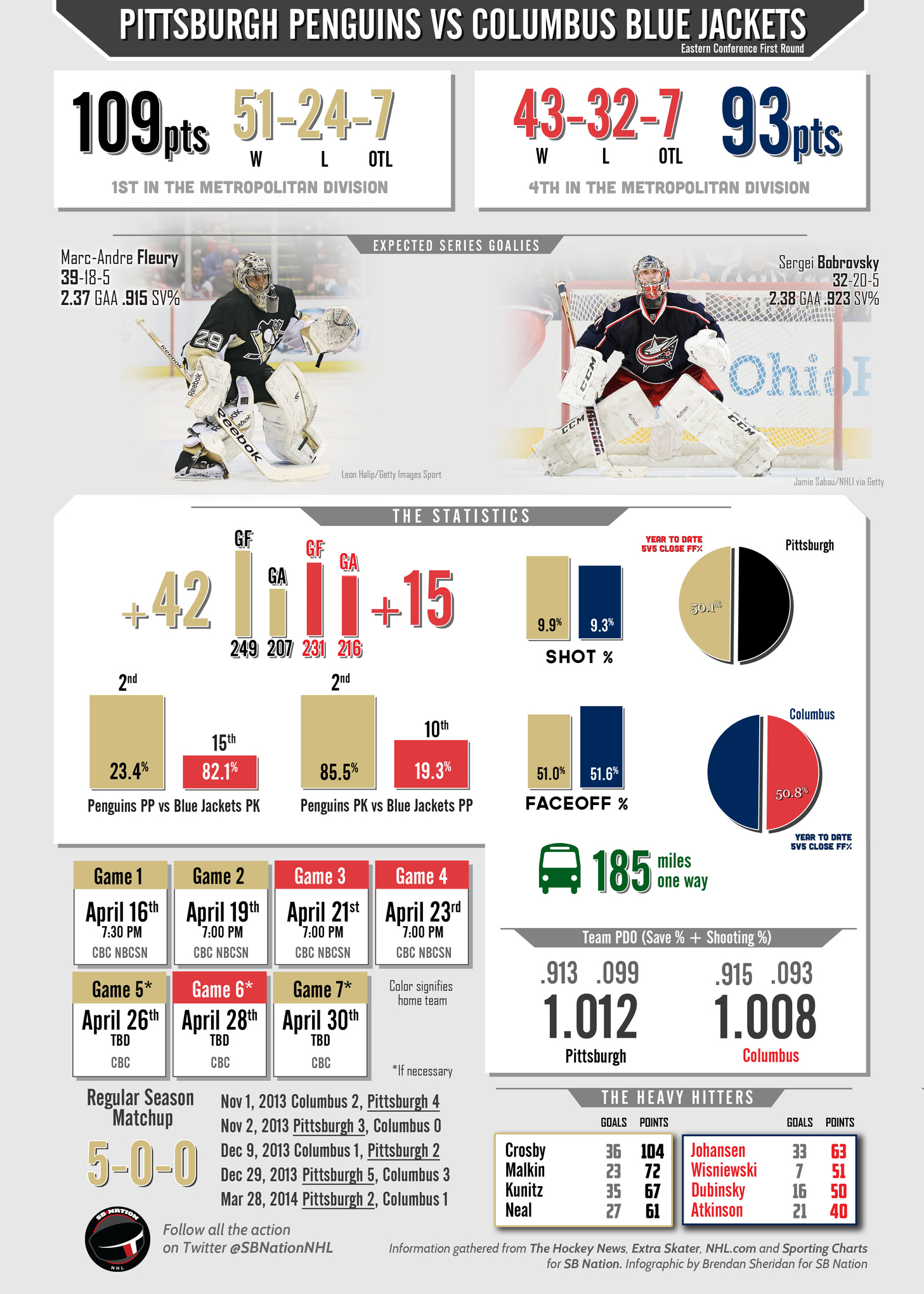 Assuming Evgeni Malkin is ready for the start of the series the Penguins will be able to roll out two of the best lines in the NHL. They're going to need them because their bottom two lines have been among the worst in the league this season, and if the Malkin and Sidney Crosby lines aren't scoring goals then nobody on the team is. If Pittsburgh gets into a situation like it did in last year's Eastern Conference Final where pucks aren't going in for Crosby and Malkin, it's going to be tough, if not impossible, for them to move on.

For Columbus, the 2013-14 season has seen some major progress in a lot of areas. When last year's team was making its late playoff push it was doing it with a rather punchless offense and relying on a superb goaltending performance to bail it out each night.

This season's team, however, has taken some positive steps forward. The ended the regular season as an above average possession team and have an emerging star in former first-round draft pick Ryan Johansen, coming off his best season as a pro. He's one of just 19 players to score at least 30 goals and record 60 points this season, and one of only two players (Dallas' Tyler Seguin being the other) to do so under the age of 24.

Neither team is particularly deep up front -- Columbus only had three forwards top the 40-point mark -- but Pittsburgh's top lines are far more potent.

An even matchup on defense

From a goals against standpoint the Penguins and Blue Jackets were pretty similar in 2013-14, but they went about it in different ways. Columbus was more reliant on goaltending, giving up more than 30 shots per game, a number that put them in the bottom-10 of the league.

Pittsburgh was more about shot volume and keeping the shots against totals down, allowing just around 28 per game. The impressive thing for the Penguins is that they did it without the srevice of their two best defenseman, Paul Martin and Kris Letang, for large portions of the season and an over-reliance on two veterans long past their prime in Brooks Orpik and Rob Scuderi. They're a different team with both Martin and Letang in the lineup, and they finally have them both back for the start of the playoffs.

For Columbus, it was all about James Wisniewski. After two disappointing and injury-filled seasons to start his Blue Jackets career, Wisniewski finally had an opportunity to shine this season and for the first time since signing his six-year, $33 million contract with the team did not disappointing. He was the best possession player on the team (54 percent Corsi percentage), one of the top-scorers (51 points), and did it while playing reasonable tough minutes.

Marc-Andre Fleury had a fine regular season performance for the Penguins, but his playoff track record since winning the Stanley Cup has been as bad as any other goalie in the NHL over that time.

• The complete first round schedule
• See the bracket
• Odds: Bruins, Blues favored to win Cup
• Our network of team blogs • Is Anaheim vulnerable?
• Wild card teams could upset
• Yes, Canada: You have to root for Montreal

Since the 2010 playoffs, 25 goalies have appeared in at least 10 playoff games and none of them have a worse save percentage than Fleury's .880. He was benched after three games last season against the New York Islanders and replaced by Tomas Vokoun. This can't happen again.

Sergei Bobrovsky doesn't have much of a playoff track record, but since joining the Blue Jackets before last season he has been one of the best goaltenders in the NHL. His .926 save percentage the past two years is second among goalies that have appeared in at least 40 games and trails only Boston's Tuukka Rask. He has a Vezina Trophy under his belt from a year ago, and even though his numbers regressed a little bit this season he was still one of the best in the league when it came to stopping shots.

If there is a matchup in this series that can lead to a potential upset, this is it.

Special teams could swing the series

The No. 1 goal for Columbus in this series is a simple one: stay out of the penalty box, and make Pittsburgh pay if it gets careless with penalties (which it probably will).

The Penguins were an average to slightly above average even-strength team during the regular season, but their power play was absolutely lethal, finishing with a league-best 23 percent conversion rate.

But while the Penguins will fill the net on the power play, they are also prone to taking terrible penalties at the worst possible times, and lately, it's been costly. While their penalty kill was among the best in the NHL in the first half of the season, that was largely save percentage-driven, as the team gave up a pretty high volume of shots on the penalty kill. In the second half, that has caught up to them and more shots are starting to beat their goalies.