How Kevin Durant took the MVP from LeBron James

Necessity pushed Durant further down the path to greatness. Now, he has caught up to LeBron.

Share All sharing options for: How Kevin Durant took the MVP from LeBron James

LeBron James should probably have won the past five NBA MVP awards. He took the crown almost unanimously in 2009 and 2010, then met a combination of Miami backlash and unachieved ridiculous expectations in 2011. He still finished third, despite nine idiots sourpusses leaving him off the ballot completely. Then he went and won the 2012 and 2013 MVP trophies by acclamation.

With the exception of the aftermath to The Decision, LeBron has been unchallenged as the most important, most valuable and best player in the league.

Until this season. Kevin Durant has caught up.

It's important to note that LeBron hasn't really given up his grasp on the MVP at all. He had his best shooting season ever, and is scoring, rebounding and passing at career norms. Many have noticed that James' verve on defense has been lacking, and that's true. He's clearly conserved energy much of the season while still completely controlling the game. He'd be a totally worthy MVP winner, and this award would be as deserved as any of his four others.

The difference this season is not with LeBron, but with Durant. LeBron had previously reached an incredibly high level and, this season, stayed there. Durant had been just behind LeBron since about 2011. He elevated his game further this year, in part by necessity as Russell Westbrook battled knee injuries.

But granting him the MVP, as voters will likely do shortly, isn't a reward for getting a little better or for surviving a hardship. The award is totally deserved and appropriate: Durant has been the best, most valuable player in the league this season.

That said, how Durant caught LeBron is the most interesting part of this story. KD was already so damn good. What did he really have left to add?

Playmaking, as it turns out. Lots of playmaking. This chart shows Durant's career performance in the three major counting stats. I used per-game numbers for scoring and per-possession numbers for assists and rebounds to make it legible. 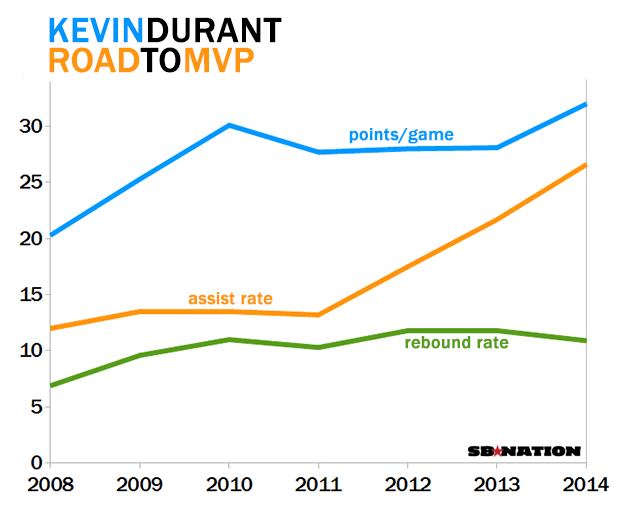 Durant has been an ultra-elite scorer since 2010. He'll win his fourth career scoring title on Wednesday night. His ability to get buckets has never been questioned. He's also been a strong rebounder at small forward for his entire career. But look at how much he's improved in setting up teammates. Even up to 2011 -- just three seasons ago -- he lagged behind even average playmakers at his position. Now he's one of the best set-up men at either forward spot, trailing perhaps only LeBron himself. Durant's assist rate this season is 26.6 percent. LeBron's is at 31.9 percent.

We fetishize completeness. Back in 2011, when Durant's value came almost exclusively from his scoring and shooting, there was an active philosophy arguing that he'd never be the best in the league because he'd never be a complete player. As the argument went: in the NBA you couldn't be the very best unless you served as a proxy for all positions. I argued that opposite, that scoring was so incredibly important and Durant did it so well that if he improved even further in just that category, he could reach the top.

As it turns out, Durant did reach higher in scoring and shooting, boosting his efficiency and output. But he also followed the path of generalization by focusing more on moving the rock and setting up teammates who needed it. I'll argue that two things pushed KD down that path: the trade of James Harden (a creator) instead of Serge Ibaka (a finisher), and these repeat injuries to Westbrook (a creator without parallel).

When constructing myths, when writing those origin stories, we so often neglect the context. Durant in 2011 didn't really need to create much. Durant in 2014 couldn't survive without creating. What was perceived as weakness was really just unnecessary. We faulted a player for doing something that was totally irrelevant to his team's fortunes. It'd be like criticizing Joakim Noah for failing to practice his scales on the piano. Now that the Thunder need Durant to facilitate the offense more frequently, he's doing it. (And perhaps now that Westbrook is back, the team will be richer for the experience.)

Anyone who assumed that because Durant did not set up his teammates often, he could not do it, was wrong. He's proven that now. And in doing so, he's shown that a team led by him without a masterful set-up man riding shotgun can win big. He's shown that he can do what LeBron's done, albeit with somewhat different (more scoring, less passing) contours. 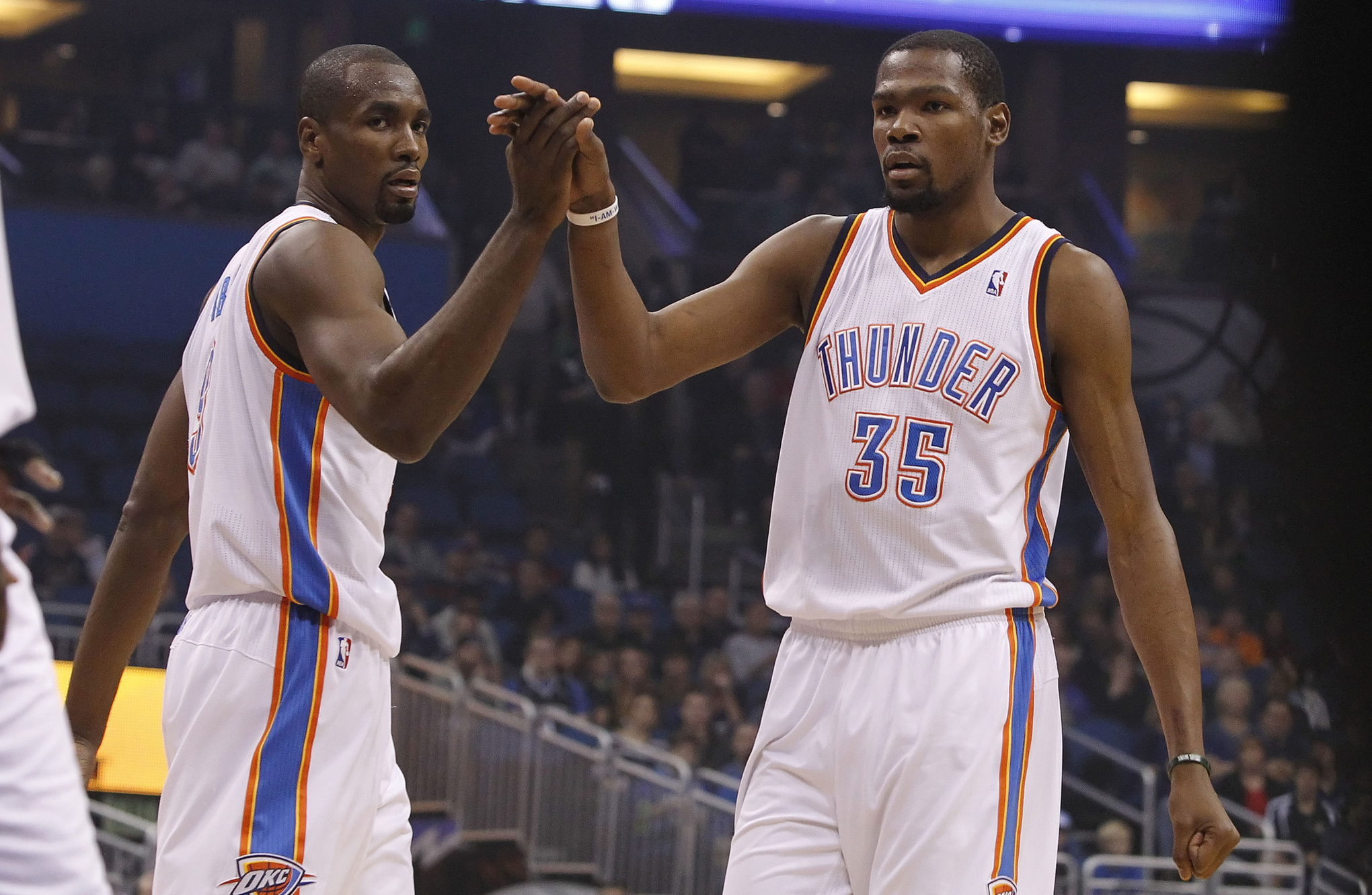 Just before this season began, I wrote about how Durant could finally catch his rival and ensure this era would be demarcated as the LeBron and Durant era (like Magic and Bird) instead of the LeBron era (like Jordan).

What would mark the transition from a LeBron solo act to a Durant duet? KD could win the MVP, or win a second NBA Finals battle between the pair. Those would be definitive answers. But let us gauge this admittedly nuanced issue with nuance. Let us judge Durant by LeBron and LeBron by Durant and determine if they are equals or not.

We don't need nuance. Durant is the MVP and LeBron officially has his foil.