Ducks vs. Stars preview: Can top-seed Anaheim avoid another Round 1 upset?

The high-flying Ducks lost in Round 1 last year despite a high seed. Can the Dallas Stars give Anaheim another upset?

Share All sharing options for: Ducks vs. Stars preview: Can top-seed Anaheim avoid another Round 1 upset?

The Anaheim Ducks were in a very similar position last year in the Stanley Cup Playoffs: a top seed in the Western Conference, a popular pick to go on a deep run --  perhaps even reach the Stanley Cup Final -- and drawing a dangerous team in the first round.

Last year it was the No. 7 seed Detroit Red Wings who ended up eliminating the Ducks in seven games. This year, the No. 8 seed Dallas Stars, a team that's been on the rise under first-year coach Lindy Ruff and possesses one of the most dangerous lines in the league, will test the high-flying Ducks in Round 1.

Almost every year a bottom seed ends up winning in the first round and knocks off a heavy favorite. The Ducks were on the wrong end of that last season. Can they avoid it this year? 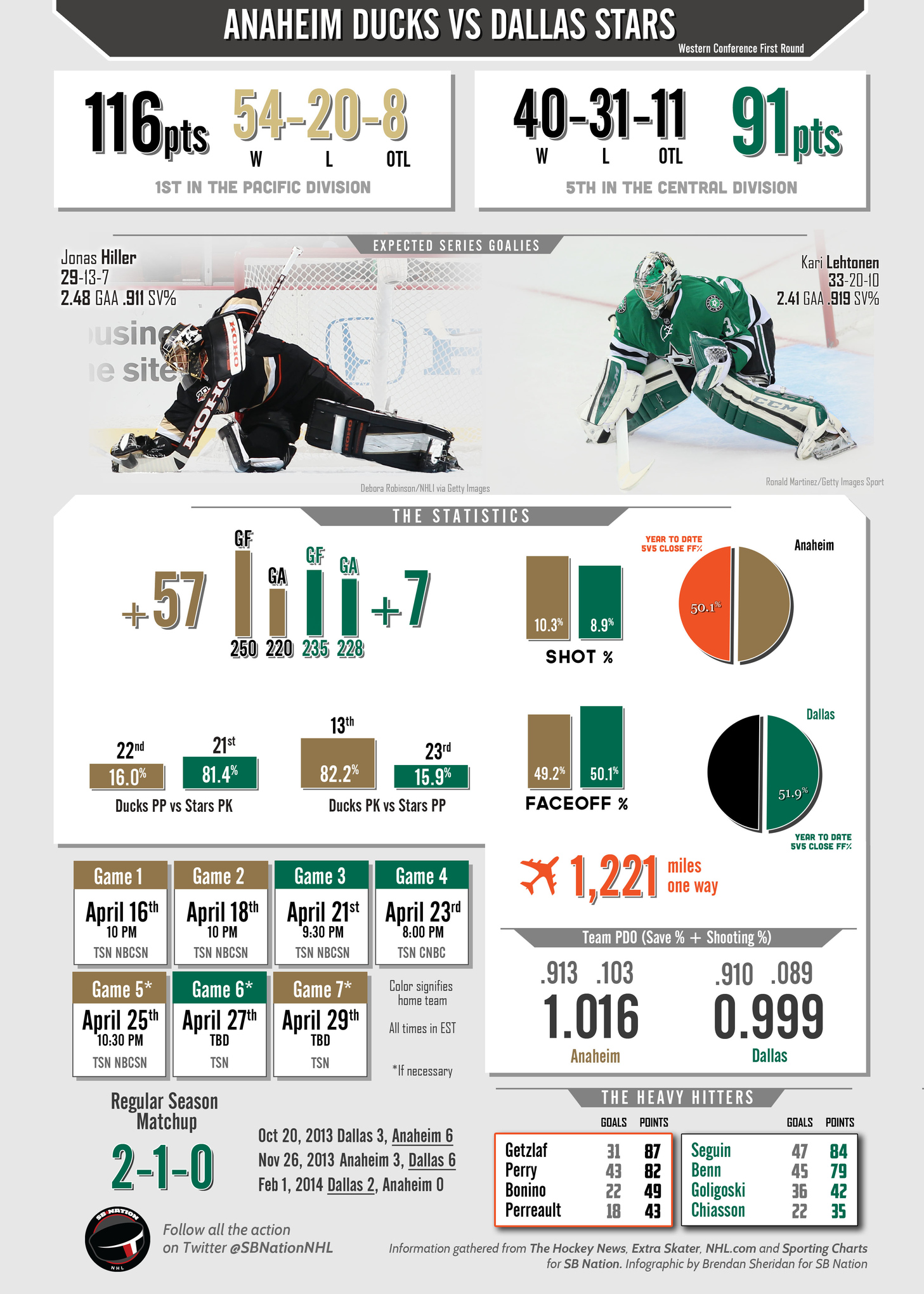 The exciting thing about this series is that it features four of the top-10 scorers in the NHL this season, and together they form two of the best offensive duos in the league.

For Anaheim, it's Ryan Getzlaf (second-leading scorer) and Corey Perry (fifth). For Dallas, it's Tyler Seguin (fourth) and Jamie Benn (10th). Both duos are the driving forces behind their teams offensive attacks. While Getzlaf and Perry get most of the attention, and for good reason, the Ducks finished the season with four 20-goal scorers and nine players that reached double-digits.

The concern with the Ducks is that for all of their success they still seem to be a bit vulnerable heading into the playoffs, and are only a middle of the pack possession team, which isn't all that different from last year's team that went into the playoffs as a No. 2 seed and lost in the first round.

The Stars, on the other hand, have actually been one of the best teams in the league this season when it comes to controlling the pace of the game, generating the sixth most shots per game in the league. They're going to challenge Anaheim's defense and with the way Seguin and Benn have played this season, they are going to get their opportunities to score.

One of the underrated story lines in this series will be what role Stephane Robidas plays in it, seeing as how the Stars traded him to Anaheim at the trade deadline for a conditional draft pick. It's not often that you see two playoff teams in the same conference involved in such a deal at the deadline, especially when there was always a chance the two teams could end up meeting in the first round.

Prior to the trade Robidas had missed most of the season due to a broken leg. He's come back as the solid 20-plus minute per night defenseman he has been for most of his career, and been a welcome addition to the Ducks' blue line. Since his arrival the Ducks have given up 2.4 goals per game (a decrease from their season average) and have seen a slight boost in their possession numbers. The Ducks have been relying on a collection of youngsters (Cam Fowler, Hampus Lindholm, and Sami Vatanen) this season and Robidas has been a solid, steadying presence for the group. One that Dallas could probably use on its blue line.

Alex Goligoski will forever be connected to the trade that sent him to Dallas for James Neal and Matt Niskanen, and because of that it tends to overshadow the fact that he is still a pretty solid defenseman that has consistently improved this season, even if he has found himself in the doghouse in Dallas once or twice over the past couple of years. He is the team's third-leading scorer, plays tough minutes, and still comes out ahead in the possession game.

For Dallas, this is an easy call. As long as he is healthy Kari Lehtonen is going to be the guy, and throughout his entire Dallas career has been a consistently solid netminder.

Anaheim, on the other hand, might have a bit of a decision on its hands. Do they go the expected and safe route with veteran Jonas Hiller, or does coach Bruce Boudreau roll the dice and go with phenom prospect John Gibson? The Ducks gave the former second-round pick his first call up toward the end of the regular season and he was absolutely sensational in his first three starts, stopping 83 of 87 shots including a shutout in his NHL debut.

Given the high-end talent both of these teams have, both have been quite disappointing this season when it comes to their power play, ranking 22nd (Anaheim) and 23rd (Dallas) when it comes to their success rate. Making it even more disappointing for the Ducks is that they were a top-five team in the league last season. They not only score fewer goals on the power play this season, they are also getting fewer shots.