Can Kevin Durant finally lead the Oklahoma City Thunder to a title?

Oklahoma City has been on the cusp of a championship the last three years, but the exploits of Dirk Nowitzki and LeBron James foiled them in 2011 and 2012 and an injury to Russell Westbrook dashed hopes last season. Can they finally get over the top?

Share All sharing options for: Can Kevin Durant finally lead the Oklahoma City Thunder to a title?

Thunder at a glance

ESPN can only show so many graphics pitting Kevin Durant next to Michael Jordan before the point starts to hit you over the head. Durant's had a special campaign in his seventh season, leading the league in points per game and PER while going on scoring binges like no one since MJ. The individual accolades are nice, sure, but the 25-year-old would gladly trade all of it for a breakthrough in the playoffs as he enters the postseason for the fifth time in his career.

The Thunder head to the playoffs as a fully-formed behemoth, finishing in the top seven in team efficiency on both sides of the ball. Durant and Russell Westbrook remain the best 1-2 punch in the conference. The development of Reggie Jackson, Jeremy Lamb, Perry Jones III and Steven Adams gives the Thunder a young, athletic bench they didn't have a year ago. Will it be enough to make it out of the West?

For a team with so much young talent, the conversation around the Thunder always finds a way to focus on their shortcomings. That starts in the middle with Kendrick Perkins, the maligned center coach Scott Brooks continues to start even after he posted a negative PER in the playoffs last year. With Derek Fisher and Caron Butler getting crunch-time minutes over the young guys, Brooks will continue to be put under a microscope until the Thunder win a championship.

Westbrook's season-ending knee injury in the first round a year ago prevented the Thunder from ever seeing how good they really were. No one denies the talent in Oklahoma City this time around after Durant's MVP season, but it's time for that to translate to wins. The pieces are in place for a title run. The only question is if Oklahoma City can finally put it all together.

That's how I feel watching the Thunder when they're at their best. Kevin Durant is a total monster -- completely unguardable and unstoppable. Then, there's the relentlessly terrifying/ terrifyingly relentless Russell Westbrook. If that wasn't enough, OKC boasts an elite defense and its entire bench has seven-foot wingspans.

Durant and a bunch of guys off the street would be scary enough, but once you add Westbrook, Serge Ibaka, and all of the other freak athletes on this roster, the Thunder become the NBA's equivalent of flying snakes. Shit ain't fair. 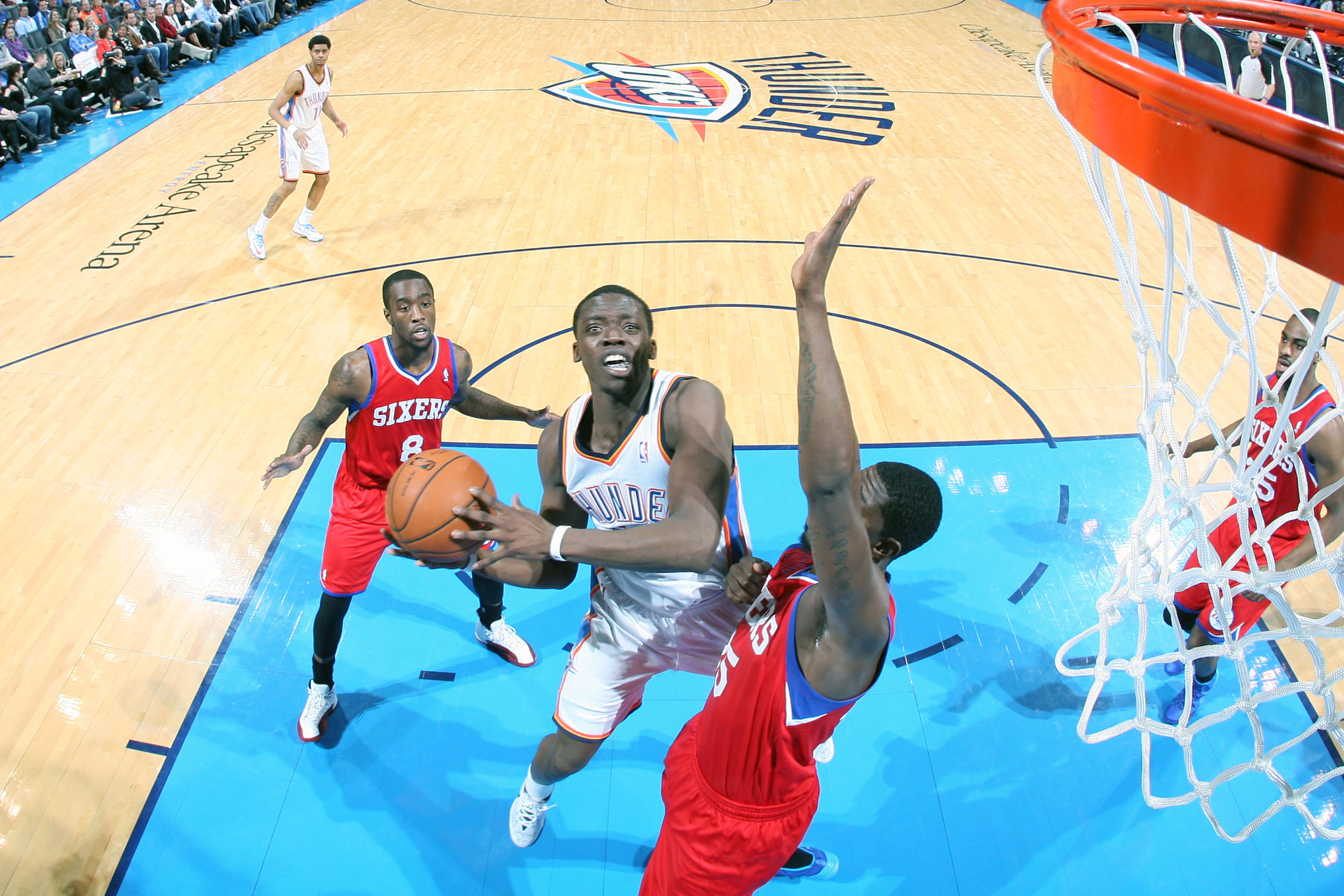 It was the year of Kevin Durant, but the rest of the Thunder pitched in for some truly memorable moments during the regular season.

Last season, Reggie Jackson found himself thrust into the Thunder's starting lineup when Russell Westbrook went down with a knee injury in the first round of the playoffs. Now, Jackson can use that experience to help a healthy Westbrook team with Kevin Durant in what's one of the more unique perimeter-oriented teams in the league.

The Thunder took a serious hit when James Harden was traded to the Houston Rockets two years ago, but Jackson's development has made that split easier to handle. While he might not be the All-Star talent of Harden, playing with Durant and Westbrook gives Jackson the ultimate stage to help Oklahoma City power through a difficult Western Conference. The Thunder need a third playmaker to perform, so it's on Jackson to do just that.

The Thunder are one of the few elite teams with a top-10 offense and defense. The offense gets its strength from excellent shooting and one of the league's highest free throw rates. The team is in the middle of the pack on the offensive glass and pretty rough in terms of turnover rate -- let Russell be Russell, y'all.

On defense, the Thunder get great marks on shooting defense and rebounding. They also happen to be average in turnover creation and foul rate. It's worth noting that the Thunder are much better defending in the paint and generally inside the arc than on three-pointers, where Oklahoma City is roughly average.

Our resident coach's scouting report on how to stop the Thunder.

Oklahoma City's offensive imagination is deservedly criticized; it will likely be the biggest culprit should the Thunder fall short of winning a title. But when you have Kevin Durant, you can run almost anything and he'll turn it into a good play.

To take advantage of his biggest strength -- his ability to shoot over anyone from anywhere -- the Thunder love using this little bit of misdirection to free him. The team's point guard, whether it's Russell Westbrook or Reggie Jackson, will come one way off a high screen from a big man. Instead of surging to the rim, they'll hang back and wait for that same big man to slide over for a bone-crushing screen on Durant's man. KD comes to the middle, catches and either shoots or drives.

ROOT FOR THE THUNDER BECAUSE...

It comes down to one person and one person only: Kendrick Perkins. We could talk all day about Kevin Durant's greatness is or how exciting the game gets when Russell Westbrook shifts into gear, but most teams have great scorers and exciting players.

I can say with great certainty that you've never seen another player quite like Kendrick Perkins. His shots have the grace of an albatross, seemingly hanging in the air for hours at a time. His screens have the power of a freight train, throwing opponents all out of sorts. His full-court pressure is like no other, using all the intimidation that his Ramses-like beard can muster.

Watching Perkins play is like watching a hockey enforcer. He's not there to score, defend or even necessarily benefit the team. He's simply out there to create an atmosphere, one that could propel other great teammates to do amazing things. That trait is just as valuable as being able to put a ball in a hoop.

Best Case: Kevin Durant seals the deal on one of the best individual seasons in history and no one wonders if he and Russell Westbrook can co-exist anymore. Blessed with a deep and versatile bench, Scott Brooks pushes all the right buttons and makes solid use of Jeremy Lamb, Steven Adams and Perry Jones in his rotations. No one makes fun of Kendrick Perkins or Derek Fisher.

Worst Case: After a string of strategic blunders and questionable last-second sets, the season ends on a desperation Caron Butler three in the second round. Columnists question if Durant "has what it takes" and if he and Westbrook can co-exist. Everyone makes fun of Perk and Fish.