The Warriors had one of their best seasons ever, but you wouldn't know it based on the drama with the team's coaching staff and front office. Nevertheless, led by Stephen Curry, Golden State will be a tough out in the postseason.

Warriors at a glance

For a team that won 50 games for the first time since 1994, the Warriors are in a good bit of tumult. Mark Jackson is seemingly at odds with ownership, with two assistant coaches having been dismissed in the final month of the season and rumors about the head coach's future are spreading rampantly.

Big things were expected of Golden State coming into the season, and for the most part, the Warriors have delivered. The arrival of Andre Iguodala and relative good health for Andrew Bogut (until recently) have sent the Golden State defense into elite territory. Any team with Stephen Curry and Klay Thompson threatens to shoot the lights out.

But there's always seemed to be just a little something missing from this team. And that little something is a bench. The team let Jarrett Jack and Carl Landry ride off in free agency. Those losses and total regression for Harrison Barnes have left the Warriors' reserve unit mostly bereft. A midseason trade for Steve Blake added some much-needed point guard help, but Golden State is still at its most vulnerable when the subs come in. Jackson's sometimes bizarre rotation decisions don't help at all.

If the Warriors exit early -- and they very well might -- Jackson could be gone. But the players are largely locked up long-term. This isn't a closing window situation, unless you are skeptical of the longevity of Iguodala or Bogut. The question is whether those in charge in Oakland will see this postseason as a stepping stone instead of a destination.

This is a different kind of war

Jamie Thomas' part in Thrill Of It All

Jaime Thomas opened his two-minute part in 1997's Thrill of It All part by missing a simple grind and falling face-first down a flight of stairs. Golden State did much the same when they opened the first 25 games of the season with a 13-12 record. But despite losing Andre Iguodala, Andrew Bogut and David Lee during various parts of the season, they have clawed their way out from their middling start in order to put together one of the league's best defenses to go along with their talent on offense.

Thomas' part rang true to skaters not just because he put together a technically powerful part, but because of his choice to tackle one of the most iconic gaps anyone had ever seen. Thomas closed his part with "The Leap of Faith" an 18-foot drop at Point Loma High School made famous in Tony Hawk's Pro Skater 2, snapping his board and launching himself onto the pavement. It was dangerous, reckless and irresponsible. And downright awesome. Golden State going into the postseason with a wonky bench and at least three players with significant injury history is a leap of faith all in its own. With the potential for further injury (Andrew Bogut has already been bitten by the injury bug) and a reliance on Stephen Curry to make the offense function perfectly, the Warriors' deadly ability in the playoffs could quickly turn into a first-round bounce if they aren't careful.

Like Thomas, it seems that the Warriors have a very real chance of crashing at the end. 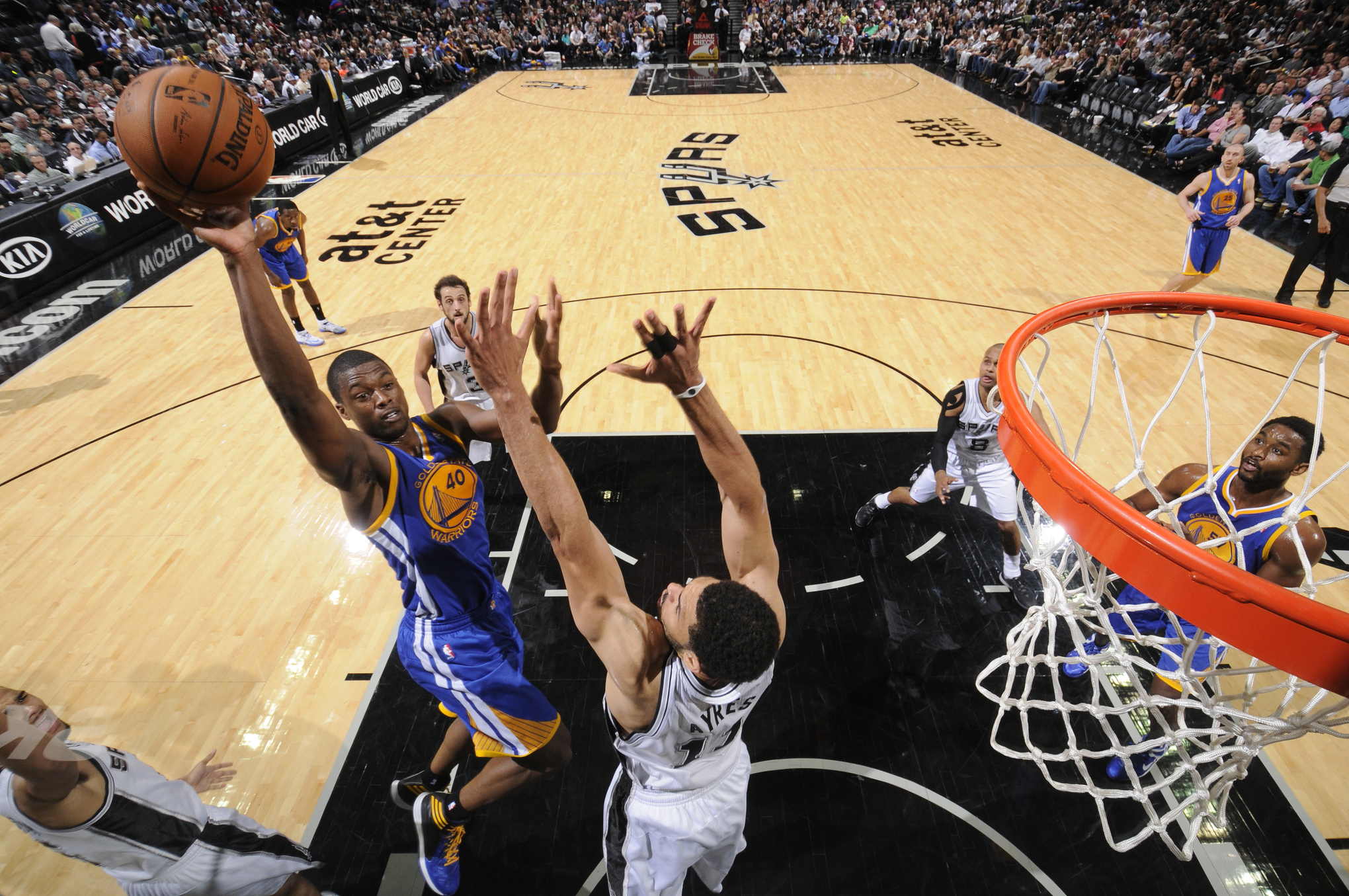 When David Lee hurt his hip against the Denver Nuggets a year ago, Harrison Barnes stepped in as a stretch-4 and the Golden State Warriors were a different team. Suddenly Stephen Curry had all the room in the world to create, and Barnes' job on offense was simple: spread the floor, shoot and slash. Golden State advanced after six games and, in the next round against the San Antonio Spurs, Barnes had back-to-back 20-plus-point games. The attention he'd attracted on national television meant everyone was excited about his future.

Since then, it's all gone off track. Barnes hurt his foot in the preseason and has never looked completely comfortable. With Andre Iguodala pushing him out of the starting lineup, Barnes is often put in isolation situations with the second unit rather than reprising the role in which he was so effective at the end of his rookie season. Barnes shot 30 percent from the field and 18 percent from the three-point line in March, and it didn't get much better in April. There's an efficient, confident player in there somewhere, a guy who is capable of impacting playoff games. We just haven't seen him in a while.

With a team starring Stephen Curry and Klay Thompson, you might expect the Warriors to skew offensively, but that's backwards. The defense, anchored by Andrew Bogut and Andre Iguodala, is one of the very best in the league while the offense is outside the top 10. The offense boasts a top shooting clip, but lags in the peripheral categories of turnover rate, offensive rebounding and free throw rate. The Warriors draw very few fouls and really aren't much of a threat for second-chance points.

The Golden State defense is just brilliant, though. Like the Spurs, the Warriors have a strong shooting defense and rebound very well defensively. The Warriors do foul a bit more and don't force turnovers, but the recipe has worked quite well all season. It remains to be seen if it'll work should Bogut miss extended time with a fractured rib.

Our resident coach's scouting report on how to stop the Warriors.

Stephen Curry and Klay Thompson combined for a NBA record 483 threes last year and were sitting on 482 entering their final game this year.

The Warriors aren't nearly as off-ball screen-happy as they were last year thanks mostly to Stephen Curry's improved playmaking and the absence of Jarrett Jack, but they still slip in some beautiful screening action from time to time.

The nuttiest of these plays is featured in the above video. One of the two members of the Splash brothers will zig-zag off a big man until he gets to the spot right under the hoop, where the other guard joins him. From there, the two will decide which option is best. One often screens for the other, and both often will curl out at the same time. The ball-handler up top will find the right guy open for the shot.

I call it ‘Crazy 8s' because it looks like that one guard zig-zagging is sketching a figure 8 on the court.

ROOT FOR THE WARRIORS BECAUSE...

You can almost guarantee that any team featuring the Splash Brothers is going to be fun to watch. And this isn't just the empty fun of Warriors teams past; Stephen Curry and Klay Thompson combined for a NBA record 483 threes last year and were sitting on 482 entering their final game this year. We've never seen a duo this good at shooting the three and probably won't again for some time.

With Curry leading the way as an unstoppable point guard force and multiple players able to push the ball in transition, this is a team that's going to run and rain threes on opponents. As a new feature in the Bay, the growth of Draymond Green and addition of Andre Iguodala means the Warriors are better able to get the type of stops they need to feed that transition attack as well.

The fun can border on reckless at some times and be derailed by excessive use of isolations at others, but it's a roller coaster ride that we all enjoyed last year and should be thirsty for more.

Best Case: With a chip on their shoulder and a pregame prayer in their hearts, the Splash Brothers knock off the Clippers and scare the holy hell out of the Thunder in the second round. Non-bloggers appreciate the defensive abilities of Andre Iguodala and Andrew Bogut (should the latter return from injury), while Draymond Green makes himself some serious coin starting for David Lee. No one gets thrown out without taking Blake Griffin with them.

Worst Case: A suspension-filled first round loss, a new coach and the realization that Lee has two more years left on his contract, while Klay Thompson is eligible for an extension.