The pick and roll is the bread and butter of any NBA team, and teams defend it in so many different ways. We lay out all of them in preparation for the playoffs.

Share All sharing options for: A complete guide to how NBA teams defend the pick and roll

"How do thee play the pick and roll? Let me count the ways."

The last NBA Shakespearean scholar was Paul Westhead. He actually was an acknowledged Shakespearean scholar with a master's degree in English literature. But he was also an offense-first guy that pushed the pace with "The System." We would all have to go back into the WNBA vault and see how many ways the Phoenix Mercury played the pick and roll. I can't recall it being of utmost importance to the Bard of Basketball.

But like my clumsy basketball paraphrasing of Sonnet 43, it wasn't actually Shakespeare that uttered those famous words. It was Elizabeth Barrett Browning, and she really knew how to wall off a pick and roll.

The pick and roll is the genesis of the modern NBA offense. It forces the defense to make a decision on each and every possession. That decision then opens up a multitude of offensive options: the pull-up jumper, the drive to the paint, the pass to the rolling or popping man, the kick-out pass, the dish to someone coming off an action on the opposite side, etc. There is so much going on.

This leads to a variety of questions. What are you willing to give up? What is the number one thing you're trying to take away? How does your personnel fit with what you would ideally want to do? Or, a better question: how can you play the pick and roll with your existing personnel?

The goal: try and make it so the pick and roll can only beat you one way. That one way must be something that's most different than their successful habits. If you ask the offense to make decisions that are new to them, you've blown up the foundation of their offensive actions.

How do thee play the pick and roll?

Blue (Also known as ICE, Down, or any other number of terms): Force the side pick and roll away from the middle by forcing the ball handler away from the middle screen. The on-ball defender must lock onto the ball-handler's high hip and force him to the sideline and toward the lurking big man. This is also an ideal time to send a third defender to overload the strong side. Here's a more detailed description. 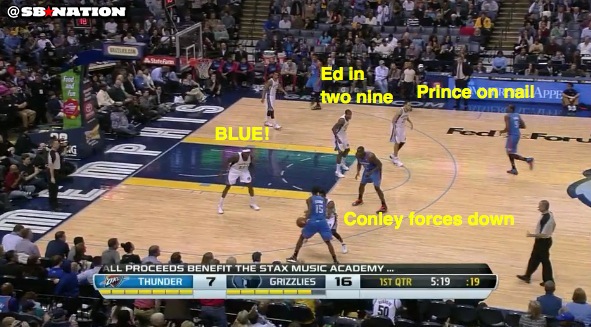 Hedge: The screener's defender stays attached or within arms length of his man. That man (usually a big) jumps out on the ball handler just long enough to slow him down, while the original on-ball defender slides under the screen and attempts to meet the ball handler before he can turn the corner into the key.

Show: The screener's man creates at least a healthy arms-length separation (and usually more) between himself and the screener. The player then takes two to three long slides and tries to string the ball handler out, preferably moving him back towards center or sideline to sideline. The ball handler's defender should have aggressively fought over the top of the original pick by then and should be closing back in on the man with the ball. After stringing the ball handler out for a few dribbles, the screener's defender then recovers to his original man or rotates to a potential shooter on the "back."

It is absolutely crucial that the help defender(s) shrink to the key and make sure to get contact with the roll man.  Slow down the roll and recover to the perimeter. 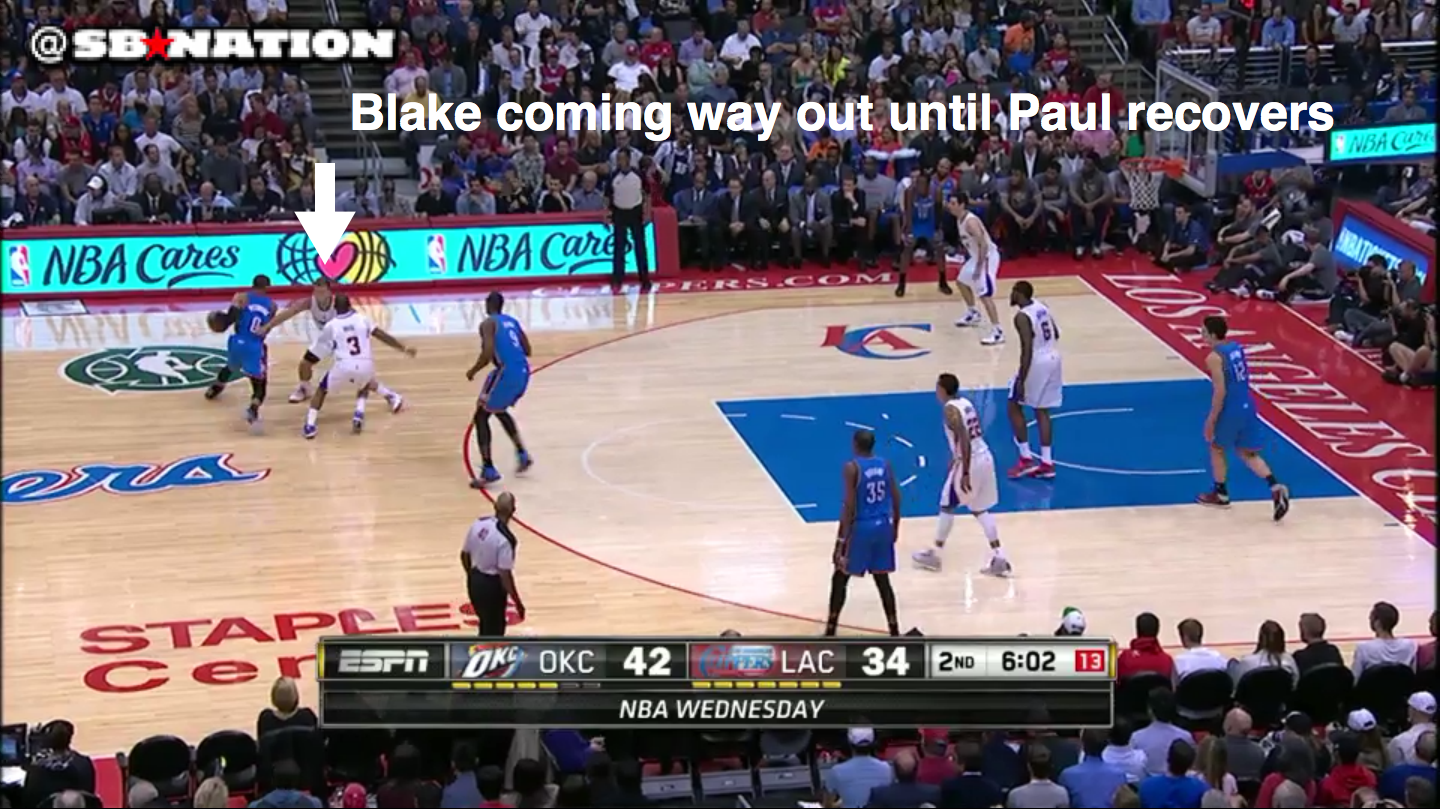 Long Arm Show or Contact Show: This is the under-the-screen version of the original show. As the screener's man jumps out at the ball handler, he extends his arm or gets a small bump on the guard. He literally sticks his arm out for a second and makes the ball handler draw contact on his "long arm" or dribble higher to avoid the contact.

This is a Tim Duncan specialty that is very rarely called. It's awkward but effective with a somewhat timid ball handler on the pick and roll. 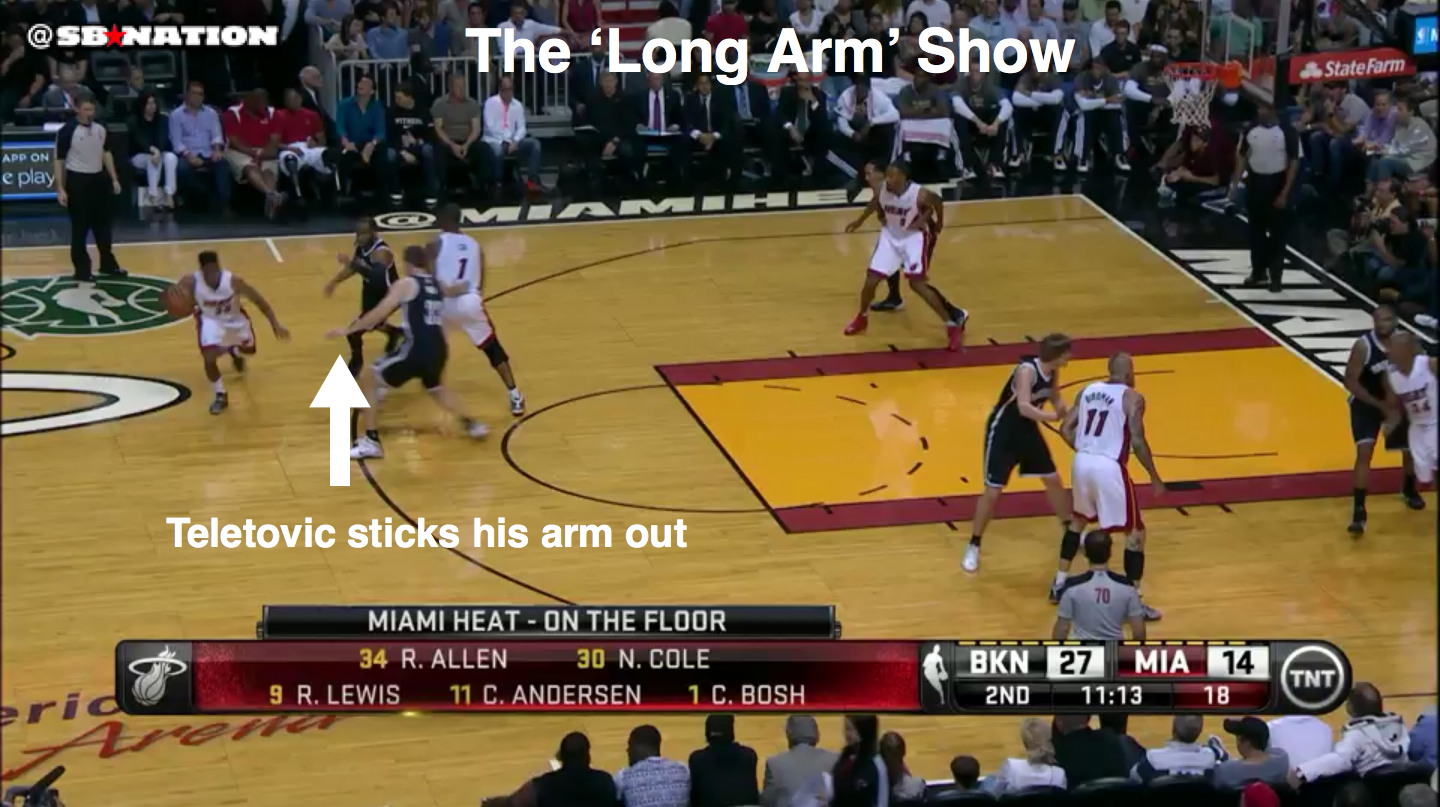 Blitz: The aggressive cousin of "show." This is a hard double team of the ball handler. It's a high risk, high reward style of destroying the pick and roll. You can only play this way consistently if you have mobile bigs to contain the ball handler and long, quick wing defenders who can cover space when outnumbered by offensive players in their area.  You must also have a help defender slide to the "nail" and be in a position to tag off on the roll man. This is the famous preferred style of the Miami Heat.

When you consistently blitz the pick and roll, you need to set up your "rules of trapping." They include:

Notice the Heat fulfilling those obligations in the video above: 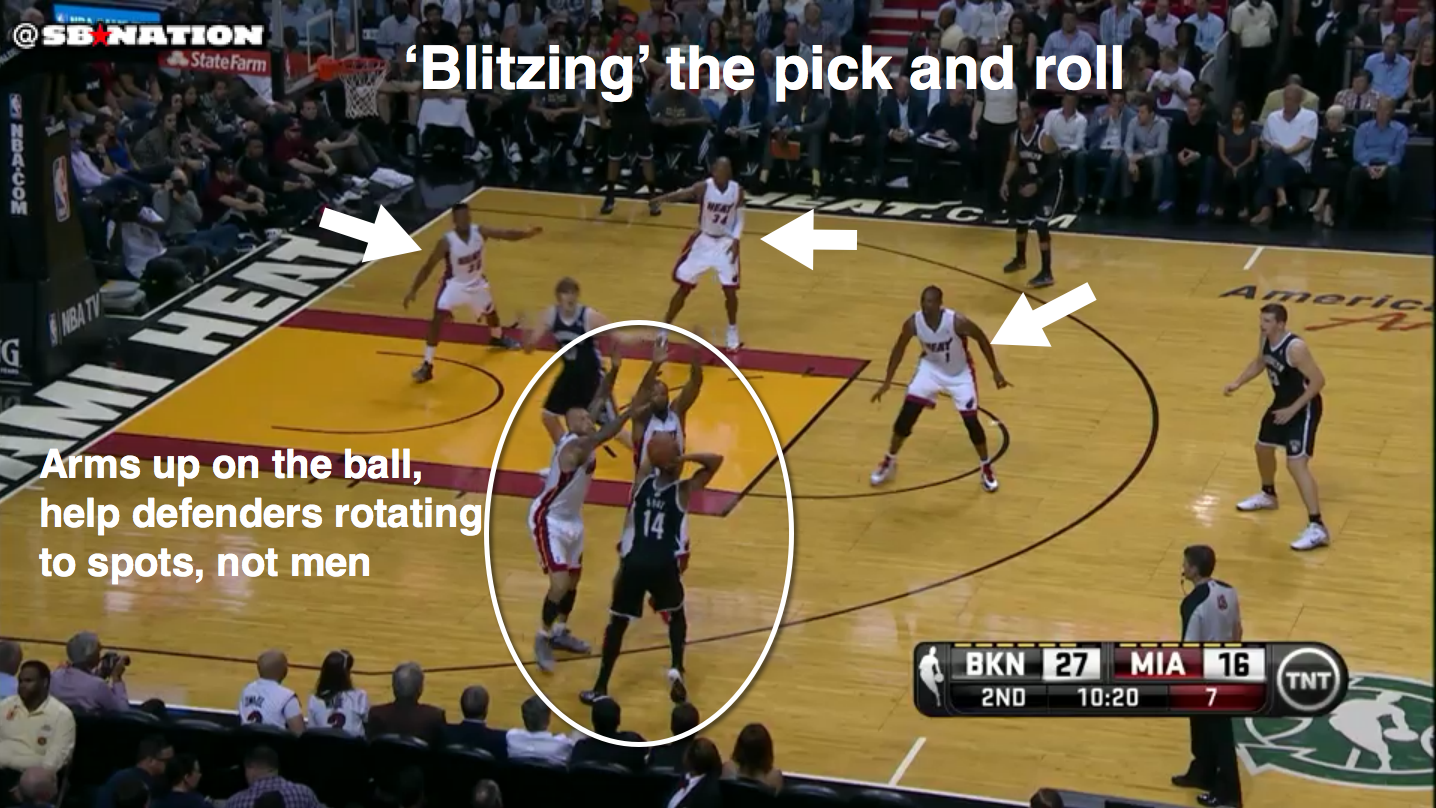 Switch: Pretty self-explanatory. The offensive personnel determines the difference between a good and bad switch. Can the bigger defender handle a guard off the dribble? How much do you need to account for the roll man? Is he a threat to catch and finish? Can the guard handle the switch long enough to shadow the big into the paint and then pass him off or switch again to a waiting big defender under the hoop?

Push: A straightforward technique that you see more often in college. As the screener sets the pick, his defender gives no space and basically attaches himself straight up on the screener. Thus, he essentially "pushes" himself into the screen. In essence, the defender makes himself part of the screen and allows the on-ball defender to go under the pick.

It's like the scene in the highly underrated adaptation of "Miami Vice" where Ricardo flies so close to the other plane that they look like one plane to the radar. Something like that ...

Zone up: The preferred pick and roll strategy of many NBA teams, especially those with large, immobile big men or an active analytics department. On middle or high pick and rolls especially, the screener's man (again, almost always a big man) doesn't come out and play the pick and roll. Instead, he essentially plays a one man zone at the elbow area of the key or even a little deeper, patrolling the high paint. The big should be able to contain further penetration by the ball handler while giving up the mid-range pull-up jump shot, seen as the least efficient attempt in the game.

This is how the Indiana Pacers play the pick and roll. Up until recently, they were better than anyone. 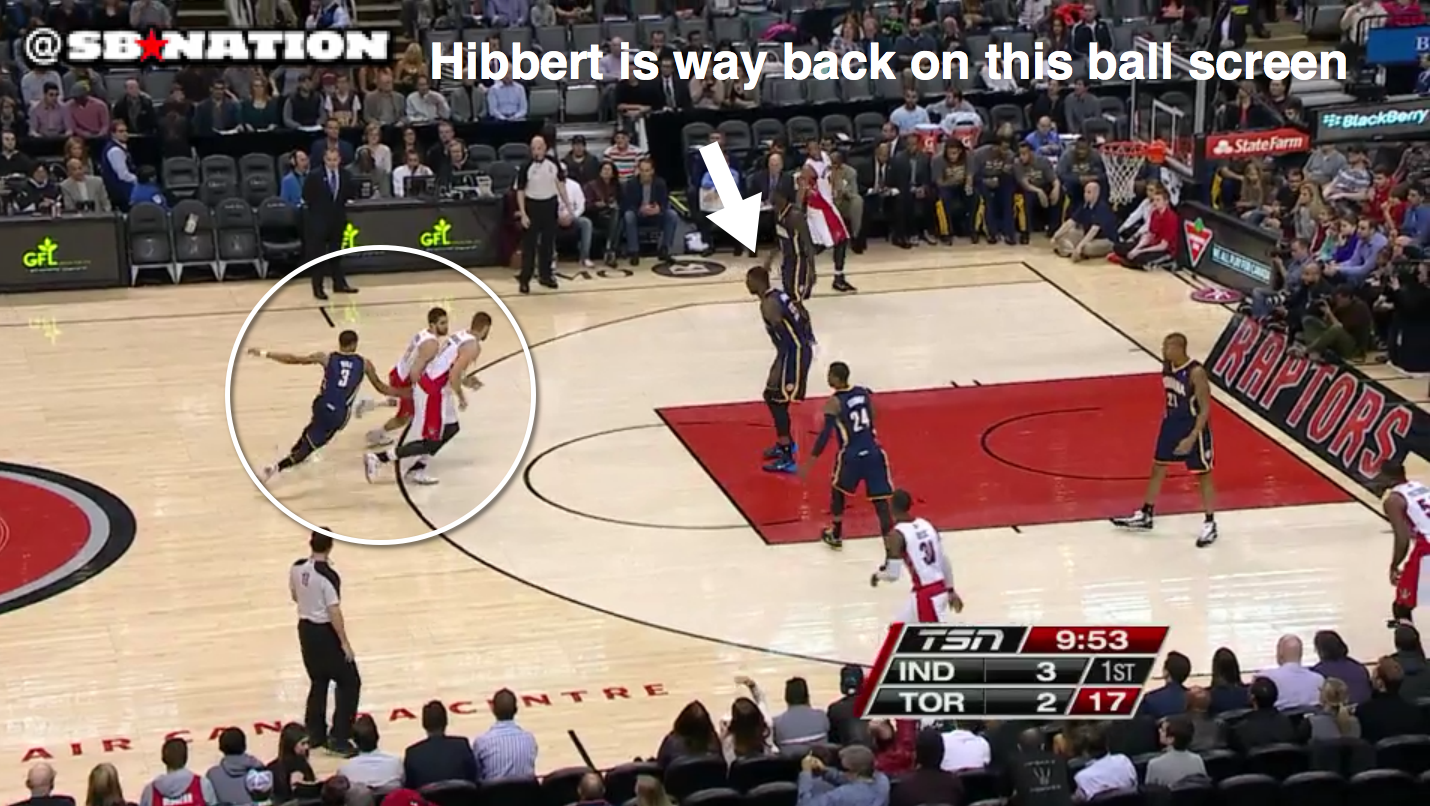 So, after all of that, how do thee play the pick and roll? Let me count the ways. Or, quickly consult Coach Browning's clinic notes.