How Sidney Crosby has carried the Penguins this season

Scoring is down across the league for pretty much everybody except for Sidney Crosby, and he is doing it in some tougher situations than he has been used to.

Share All sharing options for: How Sidney Crosby has carried the Penguins this season

When he is lucky enough to stay healthy for an entire season, it is pretty much a foregone conclusion that Sidney Crosby is going to compete for the NHL's scoring title and top the 100-point mark.

In each of those seasons he scored at a pace that would have easily shattered the century mark and put him somewhere in the top-three of the NHL's scoring race.

Teams win the Stanley Cup because they're good, not because they got hot before the playoffs.

For Crosby, this accomplishment is business as usual. But this latest one is pretty remarkable when it is compared to the rest of the league, as well as the role he's taken on in Pittsburgh in helping carry an injury-depleted roster to a top spot in the Eastern Conference.

It's not exactly a secret that goal-scoring in the NHL right now is close to an all-time low and back down to where it was in the dead puck era. Fewer goals obviously means fewer points to go around for individual players. Crosby is not only going to be the only 100-point player in the league this season, there is a decent chance he is going to be the only player to top 90 points.

With two weeks to play in the regular season, the only other player in the league that has a realistic shot at reaching 90 is Anaheim's Ryan Getzlaf, who will need seven points in his last seven games to get there (which seems doable for him given the success he has had this season). In the modern era (since 1967-68) there has never been a single season where the NHL had a 100-point scorer without at least one other player reaching 90 points.

In other words, offense is down for everybody else but Crosby is still putting up points like it's not.

For Pittsburgh, this has been a huge part of its ability to stay near the top of the Eastern Conference and roll on to what will be a No. 2 seed to start the playoffs. The Penguins have been decimated by injuries this season, closing in on 500 man-games lost (many of those games belonging to major, core players). This could have been a devastating blow to a team that was already short on depth, particularly when it comes to forwards. When they're healthy, the Penguins' top-two lines are as good as anybody in the NHL. Their bottom-two lines, even at full strength, have been an issue since the start of the start of the season.

When you take one or two forwards out of the mix, things really start to get a little bare toward the bottom of the roster.

That has resulted in a pretty major change in Crosby's usage this season. 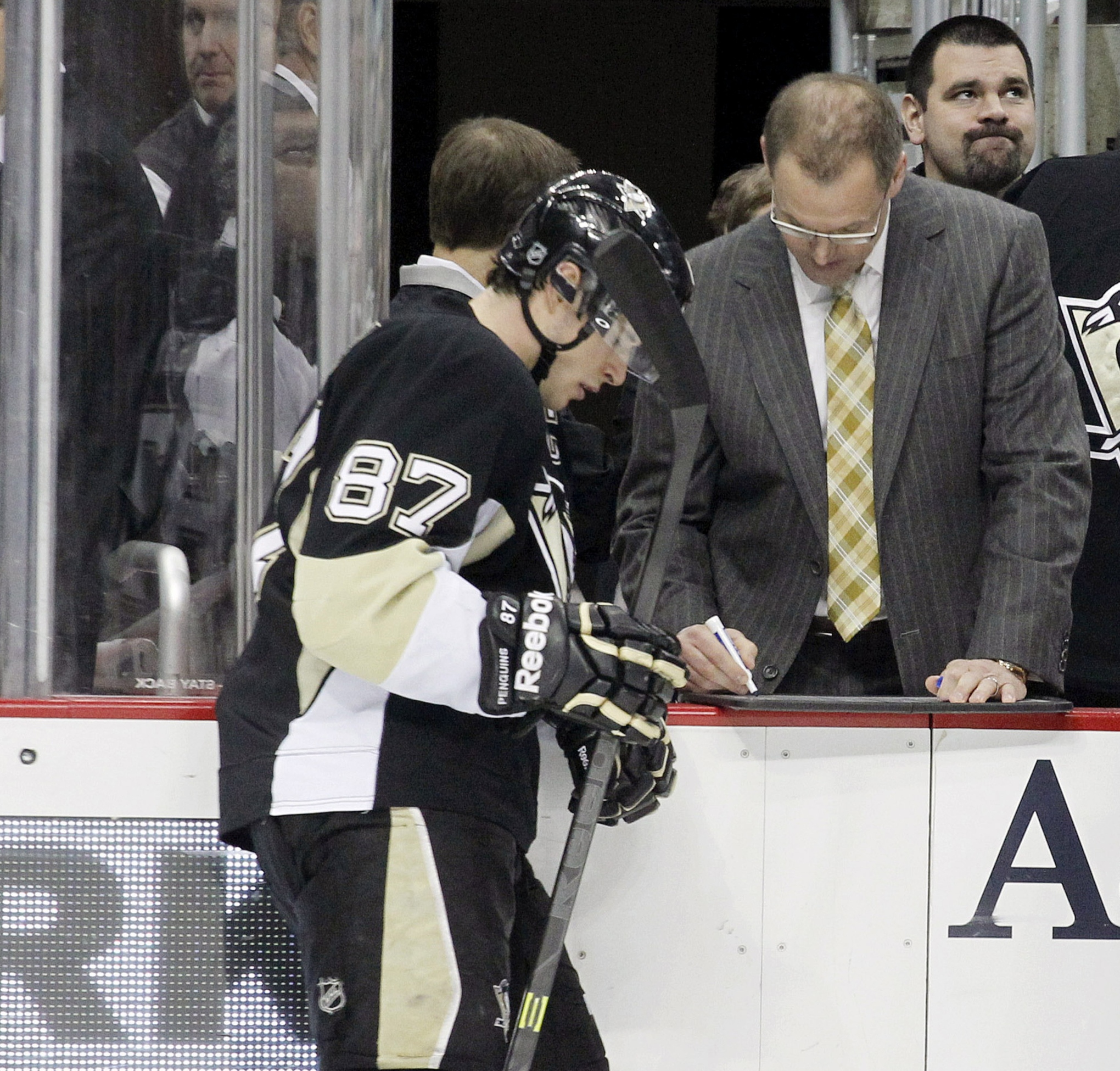 After four years of postseason disappointment and a post-Olympics performance that has been inconsistent at best, Penguins coach Dan Bylsma has been facing increased criticism for, well, pretty much everything.

Some of the criticisms are valid (his stubborn refusal to give Simon Despres meaningful playing time while guys like Deryk Engelland and Rob Scuderi fumble around in their own end of the ice; playing Taylor Pyatt over anybody).

One that isn't as valid as the way he is deploying his lines and not doing enough to get Crosby away from tougher matchups. It is true that Crosby has taken on tougher assignments this season and that Bylsma doesn't seem to be concerned with avoiding them.

First, let's look at how Bylsma has deployed his top-three lines in his five full seasons behind the Penguins' bench from a quality of competition perspective. 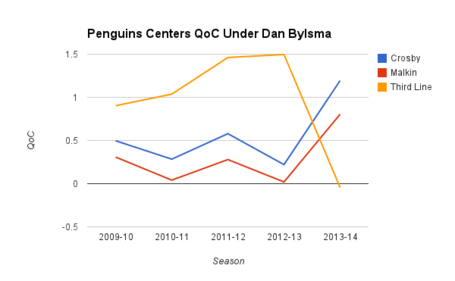 That is a pretty obvious -- and sudden -- switch in usage this season, and it is probably not by accident or because he suddenly forgot how to coach.

Where the Penguins' third line used to handle tough minutes and top assignments, the top two lines, and especially Crosby's line, have taken over those responsibilities. Instead of looking at this as a failure on the part of the coaching staff and their deployment of the lines, it should probably be looked at as not only a deliberate change in strategy, but also a necessary one.

Lyle Kossis over at PensBurgh addressed this a couple of weeks ago and did a great job poking holes in the matchup criticism.

One thing is consistent: Jordan Staal was being deployed as a shutdown center. Bylsma used him to take on the other team's top competition, which is why he led the team all three years in Corsi Rel QoC. His typical linemates -- Tyler Kennedy and Matt Cooke -- were also never far behind in this regard. This allowed Bylsma to get more favorable match-ups for Crosby and Malkin, evidenced by the fact that each of them had significantly lower Corsi Rel QoC metrics. The zone starts tell a similar story. For each year (other than Crosby in 2010), Staal started much more often in the defensive zone, which allowed Bylsma to use his offensive guns in the o-zone on a more regular basis.

With Jordan Staal centering a line between Matt Cooke and Tyler Kennedy, the Penguins' third line used to be the envy of the league. Staal was a defensive force that could match up against any line in the league, shut them down, and chip in some offense to go along with it. The salary cap and free agency eventually broke that line and Pittsburgh's depth apart and the front office hasn't done a great job replacing it over the past couple of years.

That obviously created some holes throughout the lineup.

It became increasingly obvious over the past two seasons, and especially this season, that Brandon Sutter and whatever makeshift group of AHL callups and waiver-wire fodder the Penguins assembled as wingers around him were not capable of handling those assignments. The Penguins attempted to address that at the deadline by acquiring Marcel Goc, a criminally underrated defensive player throughout his career, from the Florida Panthers. That took a detour when Goc was bitten by the Penguins' injury bug and messed up his ankle in a gruesome fall along the boards after a couple of weeks on the team.

With the playoffs looming, and everyone making their final push, we thought it would be fun to put together a little round table with opinions from someone representing each of the potential playoff teams from our network of SB Nation sites.

So now what is a coach supposed to do?

Why not call on your best player to do a little more heavy lifting?

Given the Penguins' current lineup, which is currently without forwards Evgeni Malkin, Pascal Dupuis and Goc, why not do it as often as possible? Currently his line is the only one that has the all-around ability to handle those minutes and come out ahead, and that is not likely to change even when they get all of their injured players back. So why not keep doing it, especially when all across the league star players are being used in similar roles?

Jonathan Toews does it. Anze Kopitar does it. Joe Thornton and Patrick Marleau do it. Patrice Bergeron does it.

For years the Penguins were fortunate enough to have a player like Staal on their roster so Crosby didn't have to do it. Now that he has to, it's a bit of a different look, but it doesn't mean that's the wrong approach. If you have the best player in the world and a lineup without any other line capable of handling another team's top players (and the Penguins do not) you shouldn't be worried about sheltering him or hiding him from matchups.

Especially when he has done it all season and still managed to lap the field when it comes to producing points.