Grading the unwritten rules: Carlos Gomez flips his bat on a triple

For some reason, flipping a bat on a fly ball makes pitchers madder than when the bat is flipped on a homer.

Share All sharing options for: Grading the unwritten rules: Carlos Gomez flips his bat on a triple

Welcome to the year's first installment of Writing the Unwritten Rules, in which we review instances of broken unwritten rules and determine their severity. In this episode, we examine one of the world's greatest gifts to the burgeoning field of unwritten-rule science, Carlos Gomez.

Carlos Gomez is Yasiel Puig on an indie label. You've heard of him, but he's still playing (for) the small clubs. My mom asks me about Puig after he does something insane; my mom has no idea who Gomez is. But even Puig doesn't have a collection of crazy faces like this, from an unwritten-rules violation against the Braves last year: 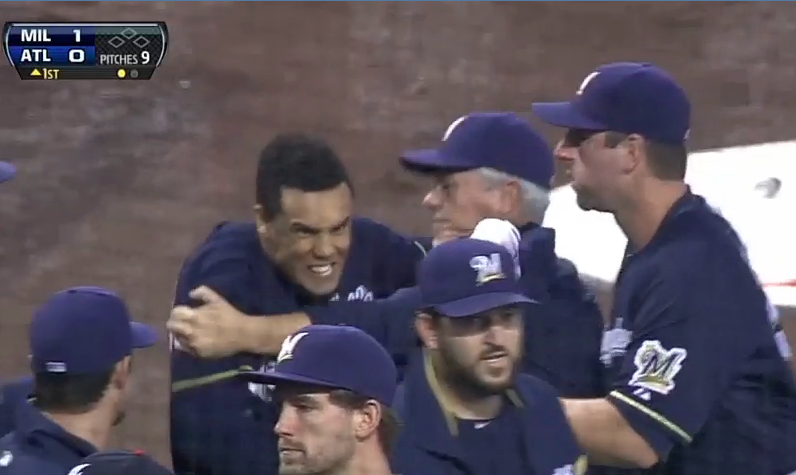 Look at Gomez having an out-of-body experience and compare it to his teammate be-bopping by at the bottom of the frame. One guy cares so danged much, and the other guy needs to get a new marker from the supply closet because his ran out. This is because the first guy is crazy.

That was last year, though! Let's look at this year.

It takes a while to get to the specific transgression, so here's what Gerrit Cole was mad about:

Gomez hit a home run and watched it languorously as the ball sailed over the OH GOD RUN RUN RUN. Cole did not like the bat flip or the stare down of what was eventually a triple, and he told Gomez as much. With 745 players currently on a 25-man roster, this might have resulted in an exchange of words, simple jawing back and forth. With a handful of players, the protective sheath comes off the crazy, and here we go.

The default position of this arbitrator on home-run-pimping-gone-wrong is simple: It breaks an unwritten rule, and the punishment is always, always, always to laugh at the player. If you're feeling froggy, do it on the field to his face. Just go up to him and laugh. "Boy, you really thought you hit that better than you did! Are you from Luxembourg? Is this your first baseball game? You are terrible at judging the distance of a batted ball. You are a bandwagon fan who cheers at pop-ups. Ha ha, you."

Whenever you're down about Yasiel Puig, remember that he can do this. And also that.

Maybe that's what Cole did say, more or less. But I'm guessing it was angrier and with naughtier words. He seemed really put out by Gomez's antics.

But is it just the fact that the ball didn't go out that upset Cole? Because by home-run-stare standards, this is maybe 60th-percentile Carlos Gomez. It's 20th-percentile David Ortiz. It's not much of a staredown at all. So if the ball goes over the fence, does Cole just grumble under his breath and move on to the next batter? That makes no sense. The difference between the two scenarios is that in the one that actually happened, Gomez looks like an ass. For some reason that makes everything worse ... I guess.

So I'll give Gomez a 3 on the unwritten rules violation, but that goes up to an 8 once he freaks out about someone saying something that was probably somewhat innocuous. I'll give Cole a 2 for not laughing the non-homer off. Bald dude who throws a haymaker when things are settling down gets a big ol' 9 because, seriously, don't throw haymakers when things are settling down. And these guys get a ♥ for having the courage to show affection for each other in the face of this kind of animosity:

"I don't understand why there's so much hate in the world, Garzy." 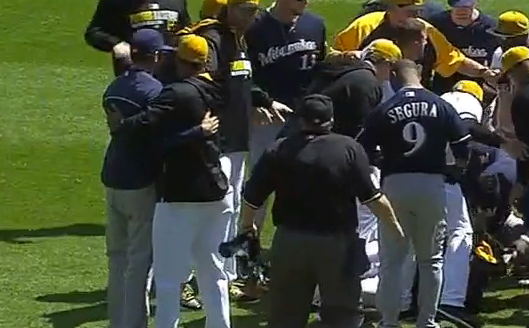