NFL Draft 2014: What do you watch when evaluating defensive tackles?

What kind of things will teams be looking for among the prospects in this year's draft? Danny Kelly walks us through the traits scouts look for when evaluating defensive tackles.

Share All sharing options for: NFL Draft 2014: What do you watch when evaluating defensive tackles?

The 2014 NFL Draft is is rapidly approaching and in the run-up to the big show, I've researched and broken down some of the scouting methodologies that NFL teams use, I've explained how each combine drill translates to the field and I've illustrated some of the terms player reports commonly feature. These segued nicely into my current series breaking down the attributes, tools and skill sets that scouts look for in NFL Draft prospects when evaluating their play in games.

Combine workouts and measureables are excellent benchmarks for athleticism, and at this time of year they're always at the front of our minds. Breaking down tape is the absolute best way to evaluate individual players. It's a complex and highly varied process across scouting departments league-wide, but the evaluation of game film can be boiled down to a simple question, whether you're a personnel exec, a pro scout, a pro draft analyst or an amateur fan at home:

Interior defensive linemen don't get nearly as much fanfare as their pass-rushing brethren on the outside, nor are they typically as well-known as linebackers, safeties and cornerbacks. They're dug in, deep in the trenches, and don't get as many statistical accolades. Still, they're vital to a defense's success. They do the dirty work so the guys outside can get theirs and the guys behind them can clean up.

There are varying roles for defensive tackles -- whether you're a nickel pass rusher, a nose tackle or a base down run-stuffer -- and gap (one-gap or two-gap) assignments and general roles vary in the 4-3 and the 3-4. I won't get too specific when it comes to individual skill sets needed for each of these, but instead just try to hit on all the different traits that scouts and GMs would look for when evaluating interior linemen in general.

One of the first things I watch for in defensive linemen is their snap count/anticipation and their explosion or get-off. If a defensive tackle is bringing the physicality to the offensive line and not vice versa, he will usually have the advantage in inertia and will be less likely to get pushed back at the snap and washed out down the line. 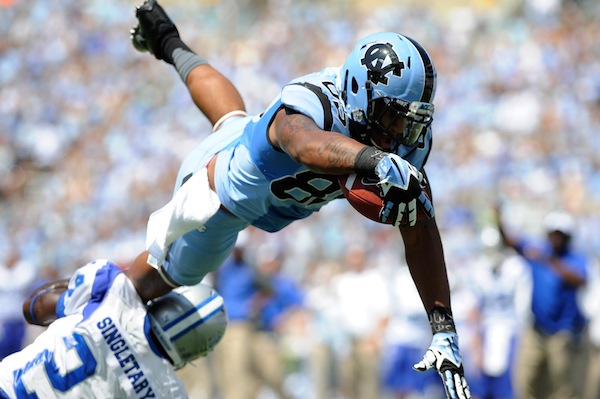 • How to evaluate a tight end
• How to scout a running back
• What to watch when evaluating WR
• How to speak like a scout
• Scouting: Not just throwing darts
• Breaking down the combine
• Scouting the tweener

Get-off is key for shooting gaps as a pass-rushing defensive tackle, and for those who play heads up on an offensive lineman, it helps them push the center or guard back into the pocket to disrupt the offensive action.

As the late, great Bill Walsh wrote in his own scouting manual:

As I stated above, defensive tackles don't typically get the statistical fanfare as outside rushers, and their sack numbers may be relatively low, but that doesn't always mean they're not being disruptive. Bull-rushing an offensive lineman off his spot and back into the offensive backfield can make a quarterback move, which disrupts his balance and timing, or can interfere with a running lane, which disrupts the timing and flow of the designed play.

As Rotoworld's Josh Norris often puts it, "disruption is production."

Of course, interior defensive linemen do in fact register statistics, and some of the most important that are tracked are sacks, tackles for a loss, QB hits and QB pressures. A pass-rushing defensive lineman is more important now than ever because of the NFL's evolution to a pass-heavy game. Getting to the quarterback to make him rush his throw -- or even better, not allow him to throw -- is the name of the game.

Does the defensive tackle you're studying display a robust repertoire of pass rush moves? The arm-over swim move, the rip move, the swim move, even a spin move? Can he bull rush? Can he shoot the gap? Can he stunt under a teammate and get upfield through a gap? As stated above, timing the snap and displaying excellent get-off is an important variable.

One oft-forgotten trait is closing burst. You'll see a defensive tackle shoot a gap or club-move past a guard or center, but once he's in the backfield the quarterback easily eludes him.

He's still done a fine job in breaking the play down, but a well-rounded pass rusher from the interior has the agility to track down the football and make the tackle or sack. Finish.

Pitt's Aaron Donald may not be as well known as some of the other defensive prospects in this year's NFL Draft, but that's going to change real soon.

Hand use, from a fundamental point of view, is something that scouts closely watch. When the ball is snapped, does the defensive tackle get inside hand placement -- i.e., inside the opponent's pads -- to control him? Does the DT extend his arms to punch and display strength on contact to jar the opponent? It's a violent, physical game, and a certain "shock and awe" is vital.

As Walsh noted, back in his scouting notes from 1997, "Quick, strong hands to grab and pull are critical. This is common with the great tackles. The hands, the arms, the upper body strength and then the quick feet to take advantage of a moving man, just getting him off balance."

A strong punch, followed by a stacking movement (imagine the defensive tackle looking to lift his opponent from his armpits and place him on a shelf) can get an offensive lineman off balance and easily bull-rushed or shed. This is where short, choppy explosive steps come into play.

You'll hear this term a lot: anchor. It's absolutely key for a base-down defensive tackle, whether he's a three-technique or a nose tackle. Can that player anchor his foot in the ground and hold the line of scrimmage? Can he take on a double team and avoid getting completely washed out of the play? Does he get low and display power at the point of attack?

The Florida State defensive tackle powered through college football, but it'll take more than muscle to make it at the next level.

Look for the ability to bend the knees and hold ground. Similarly, watch for a player who ends up on the ground a lot. This type of issue can arise from a player who has poor balance or anticipation, or tends to get too far over his feet.

As Walsh noted, a defensive tackle "must have the girth, strength, (and) ballast to hold off the guard, or to step into a tackle's block without being knocked off the line of scrimmage." Ballast is really a perfect word for it. Can the DT distribute his weight on the fly as needed to maintain balance and hold up against a physical onslaught? This is key.

Watching defensive tackle tape can sometimes get a little boring, I'll be honest. For some schemes and in some roles, an interior lineman's job isn't very glamorous, particularly if his job is to take on double teams and free up his teammates. That said, for guys who are tasked with single blocks, you want to look for someone who doesn't always just occupy those blocks. Does he work hard to shed? Does he work himself upfield? Can he advance and take ground?

This is another overlooked aspect of defensive tackle play. Vision and awareness go hand in hand, and this combination can separate the physically impressive but underwhelming defensive tackles from the greats. A great interior lineman can demonstrate all the physical necessities -- get-off, pass rush, hand-use, footwork, anchor -- but if he can't find the ball carrier, he'll become easily exploitable.

Even when taking on multiple blockers, does the defensive lineman you're watching see what's going on in the backfield and anticipate and react to be in the right place at the right time?

Similarly, does he get down the line quickly or move sideline to sideline? Not every offensive play happens in the pocket. Sometimes interior defensive linemen must move laterally at the snap and try and maintain their gap integrity relative to a moving offensive line. Teams use moving pockets, bootlegs and outside runs to mitigate issues that a solid defensive interior is creating.

"You are looking for somebody who can move down the line of scrimmage and make a tackle, pursuing a ball-carrier. That would be lateral quickness in a short area, being able to get underway and move over and through people. If you get knocked off the line, or get knocked sideways or knocked off balance, you cannot play this position. You must be able to work your way through people, so that kind of strength is a must."

Lastly, and this is pretty much a given, but size and strength are important. The particular size varies depending on the role. Nose tackles are typically above 315 pounds. Pass-rushing nickel DTs can be as "skinny" as 275 pounds. Length varies as well. With nose tackles you're typically looking for squatty, rotund body types, and with pass-rushing DTs you're usually looking for guys with some length. Length can be used for leverage and can help disrupt passing lanes.

That said, power is a constant need. An underpowered interior lineman isn't likely to have a long, productive career in the NFL.

This list of skills and tools to evaluate when watching college defensive line prospects is not complete nor authoritative. When I set out to write it, I hoped that it would generate some discussion in the comments section about priority and weight that different evaluators might give each aspect. Which tools have I missed? Which skills are most important at the position? As with anything in scouting, it's probably subjective. Fire away in the comments below.