For too long, the NBA has allowed the Clippers' owner to stay hidden in the shadows. The league's greatest shame is finally fully exposed.

Share All sharing options for: There's nowhere left for Donald Sterling to hide

It’s fitting in a way that neatly sums up Donald Sterling’s tawdry existence that it will be his girlfriend who will finally take him down, a tidy euphemism for a relationship between a married man and a woman some six decades his junior. This is the same girlfriend who’s being sued by his wife essentially for being a gold digger.

Sterling has been accused of many things over the years, from being a slumlord to a cheap, shitty owner and, of course, being a creepy racist who faced federal charges for housing discrimination. The bit about him being a serial philanderer only added to the grotesque legend. Sterling’s behavior is not even an open secret, no matter how much the league or people connected to Sterling try to distance themselves from his hideous past. 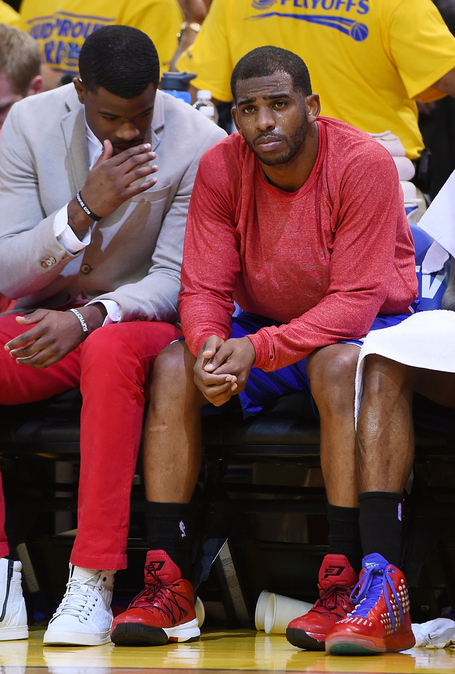 Here’s the part where we note the comments captured on tape by V. Stiviano directing her not to bring black people to Clipper games are alleged to be of Sterling and likely constitute an egregious invasion of his privacy. Here’s where we also note that if the allegations are proven correct, they aren’t even close to the most reprehensible thing Sterling has done over the years. There’s apparently more of that still to come.

The only surprising thing is how quickly this is happening after years of willful ignorance. Yahoo! Sports' Kelly Dwyer was the first to note the TMZ report early Saturday morning and call it to the sport’s attention. By the end of the day, every columnist in the country had checked in with what amounted to call to arms. It made the front page of Sunday’s edition of the New York Times and quickly crossed over from basketball’s large but insular world into mainstream conversation.

All over the league, players and coaches spoke up about Sterling, none more strongly than LeBron James, who told reporters before Miami’s playoff game that "there is no room in our league for Donald Sterling." That’s the quote that will hang on him forever.

The Clippers had their own protest, turning their warm up tops inside out, tossing their shooting shirts at center court and wearing black socks and arm bands. The fans in Oakland where the Warriors were throttling Sterling’s team also had their say.

Clippers owner is and always was a scumbag

Sterling is finally now the league’s problem. For reasons that have never been properly explained or examined, David Stern gave him what amounted to a lifetime free pass. His fellow owners did the same. Sterling was one of Stern’s greatest blind spots, a wretched blot on a league that likes to present itself as a shining beacon of enlightened thought and progressive views. That’s over now too, the myth exposed by its greatest hypocrisy.

New commissioner Adam Silver dutifully played the whole thing down the middle, which was annoying but probably legally sound.

"All members of the NBA family should be afforded due process," Silver said in Memphis on Saturday. "Which is why I'm not yet prepared to issue any potential sanctions against Donald Sterling. We will move extraordinarily quickly. We plan to have this wrapped up in the next few days."

What will the Clippers do next?

With the Clippers returning home for Game 5, the players would like to make an even stronger statement against owner Donald Sterling than they did in Game 4.

What will the Clippers do next?

For their part, the Clippers released a statement questioning the validity of the tape, a defense that no one is buying but has to be worked through all the same.

Fine. Let the process play itself out. Sterling is known for suing anyone and everyone who threatens his standing and for paying whatever it takes to make things go away. The commissioner sounded like a lawyer preparing for legal action and there’s no upside, no matter how tantalizing, in giving the public a tasty soundbite. For now, anyway.

The excommunication of Sterling should have started years ago. It took Major League Baseball several years to get rid of Marge Schott, a process that included hefty fines and long suspensions. You can’t shame someone who is shameless, but you can make it increasingly difficult to remain a member of an exclusive club.

There is the notion that Sterling’s mess is unfortunate because it’s overshadowing what has been an amazing first round of NBA playoff action. No. The games have continued to be fantastic. This is the best thing that could have happened because the harsh glare of the spotlight is now finally honed on the Clippers’ owner as it always should have been.

If the league’s judgment isn’t swift and harsh, there will be hell to pay. Even if it does come quickly, it probably won’t be enough. Getting rid of owners is difficult, if not legally impossible.

But there is nowhere for Sterling to hide anymore and you can thank his mistress and all the unseemliness that it implies for making it happen.