The 2013 season was a Year-Zero situation for Willie Taggart at USF. Almost nothing went well on the field, but with his system now in place and a great recruiting class coming to campus, the Bulls might be capable of turning things around quickly.

The offense never came around. The defense had a strange "one bad game for every two good ones" thing going on for much of the year. USF lost by 18 at home to FAU, 25 at Rutgers, 31 at home to Louisville, and, of course, 32 at home to McNeese State. USF fans argued about the definition of "rock bottom." Only brief bouts of competence in two games in October prevented a winless year.

For a program that went to six straight bowls from 2005-10 and had only twice won fewer than five games in a season in its FBS history, the 2013 South Florida season was a disaster in almost every possible way that a season could be a disaster. For head coach Willie Taggart, engineer of a quick, impressive turnaround at Western Kentucky and strong branch on the Harbaugh coaching tree, it's difficult to imagine how Year One could have gone much worse.

Year Zero, on the other hand...

In a rebuilding project, I often refer to a coach's first year at a program as Year Zero, a season in which quick fixes aren't available and to lay down the foundation he wants, the coach more or less burns the building to the ground. (It's often burned down already.)

By the end of 2013, Taggart had installed a freshman quarterback, handed out starts to three sophomore offensive linemen and a freshman, and given major playing time to two freshmen and a sophomore in the secondary (with two other freshmen in the rotation). And despite the two-win season, when 2013 ended, Taggart went out and landed what was quite easily the best recruiting class in the AAC. 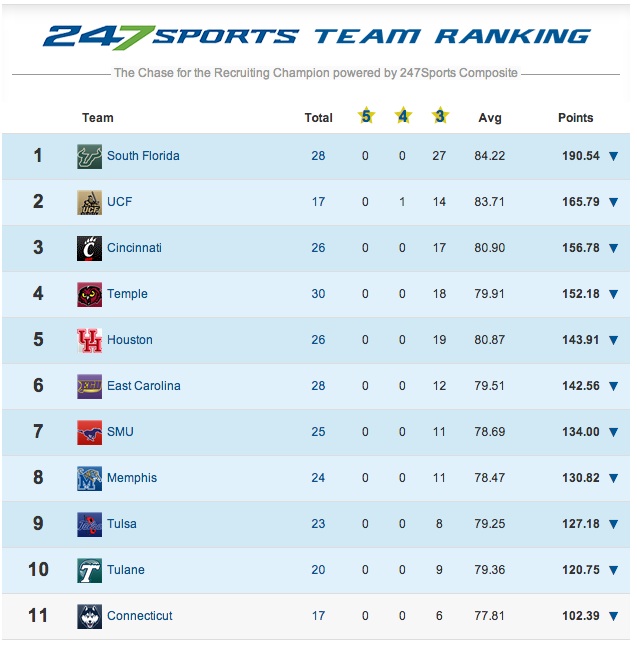 Entering Year One (technically Year Two, yes), USF and Taggart are in an odd situation. Because of experience and regression-to-the-mean odds alone, the Bulls should improve. But at the same time, recruiting has created a situation in which USF is supposed to improve quickly and dramatically. Recruiting successes create impatience when on-field successes don't follow, but how much can USF really expect to improve in one year?

There are plenty of examples of coaches needing a year to get established, then taking off. Taggart himself went 2-10 at WKU before winning 14 games in two seasons. George O'Leary at rival UCF went 0-11 in 2004, then won at least eight games in six of the next nine seasons. Lou Holtz famously went 0-11 at South Carolina in 1999, then won 17 games in 2000-01.

Quick turnarounds exist, and one could happen in Tampa. USF plays only two teams projected in the top 40, so the Bulls wouldn't have to put an elite product on the field to win quite a few games. The schedule cooperates if the talent coalesces. But there are obviously no guarantees, and what happens to recruiting if the Bulls go 2-10 again against a schedule that doesn't feature much elite talent, but does include nine games against teams projected to rank 74th or better?

It's going to be an interesting year at USF. The array of potential outcomes is enormous.

3. From start to finish

But seriously, USF was really bad last year. And whereas some young teams in transition start to figure things out after a rough start, there was no hot start or finish at USF in 2013; the Bulls were basically the same from start to finish.

I mean, you can find improvement there if you squint hard enough, but not really. The offense only twice averaged even 5.0 yards per play, and while the defense wasn't in any way the problem (and did improve slightly), USF still allowed at least 6.3 yards per play four times and at least 5.0 seven times. USF just never had a chance in 2013. But hey, two wins is better than zero ... 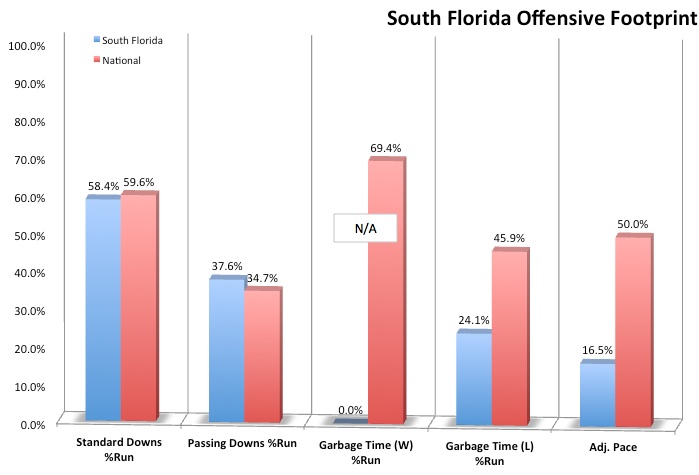 These previews feature all sorts of statistics, offensive and defensive (and special teams!), from the previous season. For USF's sake, let's ignore most of the offensive numbers. They're not pretty. USF was able to rip off occasional big plays, but any positive effect was negated by a mountain of three-and-outs and negative plays.

(Be honest: You ignore most of the numbers anyway.)

So let's take stock. USF got three-star quarterback Mike White quite a bit of playing time in 2013; he overtook ineffective Bobby Eveld and beat out Penn State transfer Steven Bench, and while his completions didn't really go very far (11.6 yards per completion, which isn't awful if your completion rate is about 65 percent), he was the only USF quarterback who managed to complete even 50 percent of his passes or keep his sack rate under 10 percent. He had a massive interceptions problem, but he was probably still the shiniest turd of the bunch.

White was also a freshman and almost helped to engineer an upset of UCF. (The Bulls led, 20-16, with under five minutes remaining before a UCF score and a White interception finished them off.) So despite the stat line, we'll put him on the assets list. Then again, he might not even be the starter this year. Bench had a hell of a spring.

OK, so what other assets might offensive coordinator Paul Wulff have to work with in 2014? We'll talk about star wideout Andre Davis in a moment, but he's great. Sophomore running back Darius Tice showed some potential explosiveness last year. Tight end Mike McFarland averaged almost 8.0 yards per target, and there are all sorts of other interesting tight ends on the roster (which certainly fits the grind-it-out offense Taggart was successful with at WKU). The line returns seven players with starting experience, including three-year starting tackle Quinterrius Eatmon and two-year starting center Austin Reiter. And they could start guards named Brynjar and Thor (with players named Max, Mak, and Kofi coming off the bench), which is fun.

And there are all sorts of three- and four-star freshmen and redshirt freshmen who could impact the rotation.

In a vacuum, that's quite a hefty list of assets. Now they have to actually be assets.

Andre Davis isn't a particularly efficient receiver. On a better (but not great) offense in 2012, he still only managed a 54-percent catch rate. But in 2013, he was officially one of two big-play threats for the feckless USF offense.

Marcus Shaw was an explosive, unfortunate running back last season -- if he saw the open field, he did damage, but he seemingly went weeks without seeing the open field -- and of the five USF players to catch 10 or more passes, only Davis averaged better than 12.5 yards per catch. (McFarland averaged 12.5, and the other three averaged 8.5.) He had 134 of USF's 311 receiving yards against Houston, 110 of 198 (!) against Memphis, 113 of 217 against SMU, and 87 of 211 against UCF. If he can get any help whatsoever from fellow wideouts, he could put up some fantastic, if still inefficient, numbers. USF has a wealth of tight ends who might play a productive role, but someone else will be needed to stretch the defense out, especially in Shaw's absence. 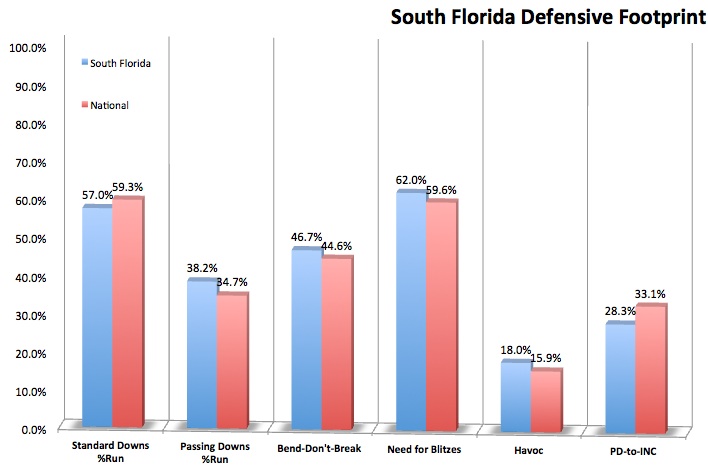 6. A waste of a decent defense

There were some glitches along the way, and there were occasional issues on standard downs, but USF's defense deserved a better fate in 2013. Powered by a very good line, USF ranked a solid 56th in Def. F+.

It's hard to know what to expect from the D in 2014, however. The line was decimated by attrition, longtime linebacker stalwart DeDe Lattimore is gone, and half of the two deep has been skimmed off in the secondary. The offense will improve, simply from an "It can't get worse" perspective, but that could simply offset regression on the other side of the ball. Defensive coordinator Chuck Bresnahan is shifting to more of a 3-4 alignment in 2014, and lord knows he has a wealth of young, three- and four-star options to fill holes. But while youth in 2014 could mean great things for 2015 and beyond, it might not be that great for 2014.

One way to offset losses in the front four is to make it a front three. With ends Tevin Mims, Aaron Lynch, Ryne Giddins, and Julius Forte (combined: 31.5 tackles for loss, 13.5 sacks) all gone, along with play-making tackle Luke Sager, Bresnahan will be looking to supplement tackle Elkino Watson with some newbies. Most of the promising players up front are over 300 pounds (in some cases, well over 300 pounds), so the Bulls should have the size requisite for an effective 3-4. We'll see if there's actual play-making ability to go with the girth.

Without Lattimore and safety Mark Joyce, USF is tasked with replacing its steadiest, most interesting back-seven players. But Bresnahan has options upon options. Senior linebacker Reshard Cliett appears to be a keeper, and sophomore defensive backs Nate Godwin, Johnny Ward, Hassan Childs, and Lamar Robbins combined for six interceptions and nine break-ups last year. Redshirt freshman Auggie Sanchez had a breakout spring, and a whopping 10 members of the 2014 recruiting class were three- or four-star linebackers and defensive backs.

Again, there might be too many losses here to avoid regression in 2014, but there's no question that there's potential for excitement here in the future.

When you're starved for points, the value of your kicker gets magnified. You need points whenever you can possibly get them, and Kloss made 11 of 16 field goals of 40 or more yards. No college kicker should be relied on to this degree, but Kloss passed most tests and didn't miss a kick (or PAT) under 40 yards all season. Hopefully he's kicking more PATs and fewer 51-yarders in 2014.

In all, like the defense, the special teams unit deserved better. Kick coverage was a bit of an issue, but there weren't enough kickoffs for that to be costly. Mattias Ciabatti is a good punter, and Chris Dunkley has solid return potential, especially on punts. If the offense cuts downs on three-and-outs, USF should be a pretty good field position team.

10. How quickly can this turn around?

USF really is a mystery in 2014. One can see how the offense might show strong second-year improvement, and while the defense is far less experienced, it has a ton of potential and will have even more in the future.

Still ... USF ranked 99th overall in the F/+ rankings last year. Massive improvement is on the table, but modest improvement is always more likely. What happens if USF climbs back up into the 70s? It all depends on the start. USF's schedule is odd, with the first four games all at home (three against ACC/AAC teams), followed by five of seven on the road. USF was worse than Maryland (by quite a bit), NC State and UConn (by a little) in 2013, but all three of those games are winnable. Start 4-0, and the Bulls should have enough opportunities to find wins five and six. Start 2-2, and you're almost certainly looking at a fourth straight year without a bowl.

Recruiting is about the future, and at the moment it's pretty easy to see a bright future for Willie Taggart at USF. But he won't get too many free-pass recruiting classes; the wins will have to follow within the next couple of years, or things get dimmer in a hurry.