The cliché is that defense wins championships. It's a little more complicated than that.

Everyone's heard it a million times: defense wins championships. In the NBA, sometimes that's modified to include rebounding, as in defense and rebounding win championships.

In reality, it's a little more complicated than that. But there's some evidence that a cousin cliché -- NBA defenses get tougher in the playoffs -- was true in 2012-13.

First, the math. We can calculate a team's expected offensive rating in any given game or series pretty easily: you average the teams' total offensive rating with the opponent's defensive rating. For instance, if Team A has an 105 ORtg and Team B has a 100 DRtg, Team's A expected ORtg vs. Team B is 102.5. This doesn't take into account home vs. road games, but luckily playoff series are fairly evenly split: no team can finish a series with more than one home game more than their opponent.

If this happens on a wide scale in the playoffs, we might have a little inkling that defenses do get tougher in the postseason. Here's what happened in the 2012-13 playoffs. 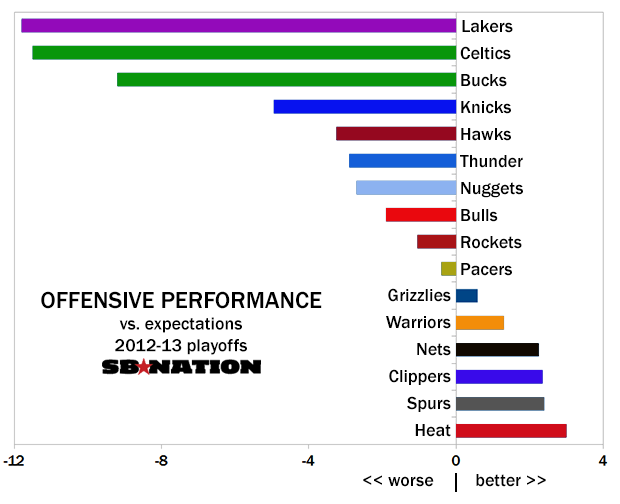 The offenses of 10 out of the 16 playoff teams underperformed based on expectations. And remember, we're adjusting for the increased quality of teams in the postseason by calculating expected performance against actual opponents.

What this tells me -- based on this limited data sample in one year with a few extenuating circumstances -- is that regular-season offensive performance may actually overrate postseason offensive potential even when adjusting for opponents.

Of the eight teams eliminated in the first round, six failed to meet offensive expectations. The two that did -- the Nets and Clippers -- were facing two of the best defensive teams in the league in Chicago and Memphis, respectively. That means that expectations for their offenses were quite low -- the Expected ORtg knew it'd be a tough slog -- and they managed to eek out roughly league average offensive performances. For the other six one-and-done teams, offense came by much harder.

I mentioned some extenuating circumstances, and here they are: two underperforming teams, the Lakers and Thunder, were missing big offensive cogs. As such, their Expected ORtg -- based on regular season data -- was inflated over reality. Still, the Lakers in particular were so awful offensively against the Spurs that I'm not sure Kobe Bryant would have mattered. OKC, meanwhile, missed Russell Westbrook, but still didn't underperform by a small amount.

The Knicks, Bulls and Thunder underperformed offensively in multiple series. The Pacers underperformed all the way to the Eastern Conference Finals. That's saying something because the Pacers' expectations were low: Indiana entered the postseason with the league's No. 19 offense.

But what's most interesting to me is that the Spurs didn't get to the Finals on the strength of their defense. Their defense performed well, especially against Memphis. But what stands out more in the data is that San Antonio beat expectations on offense repeatedly and by serious margins. Miami also won with offense. Indiana beat offensive expectations a good bit in the East finals, but the Heat scored a ton on the Pacers' elite defense.

In each series, the data indicates that what got San Antonio and Miami to the Finals wasn't defense, it was offense. Specifically, it was their offenses beating expectations against tough defenses. The result, so it goes, was a Finals series heavily tilted toward high efficiency and lots of scoring.

We might suggest that what won the 2013 NBA championship wasn't defense, it was overcoming tougher playoff defenses. The Spurs and Heat did that, and Miami prevailed on that theme in seven. We'll find out of that happens again in 2014.