REF RAGE: A study of our NCAA Tournament frustrations and hatreds

We at SB Nation posted tens of thousands of comments as we watched this year's NCAA Tournament. Most were fun. Hundreds were critical of the refs. Many were posted in blind fits of fury. Here, we examine the phenomenon of "ref rage," and see who got the maddest.

Share All sharing options for: REF RAGE: A study of our NCAA Tournament frustrations and hatreds

1. THE FACTORS BEHIND REF RAGE.

In case you're new to basketball, I thought it would be helpful to go over the game's standard measurements and court dimensions. 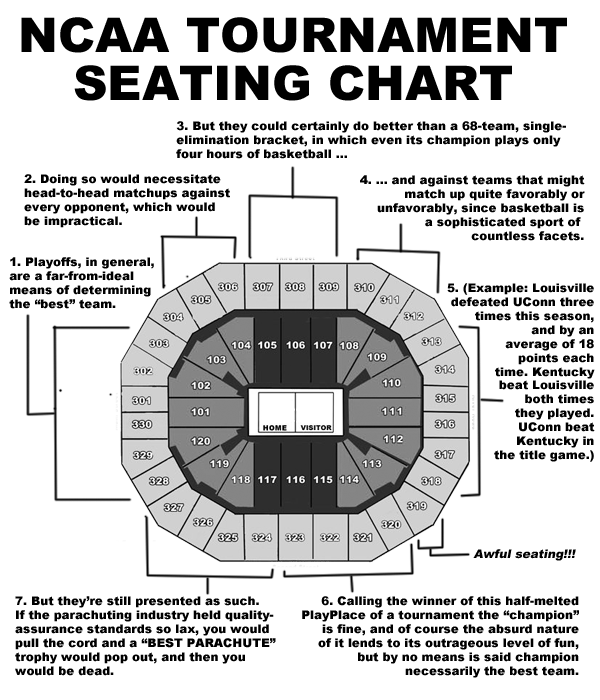 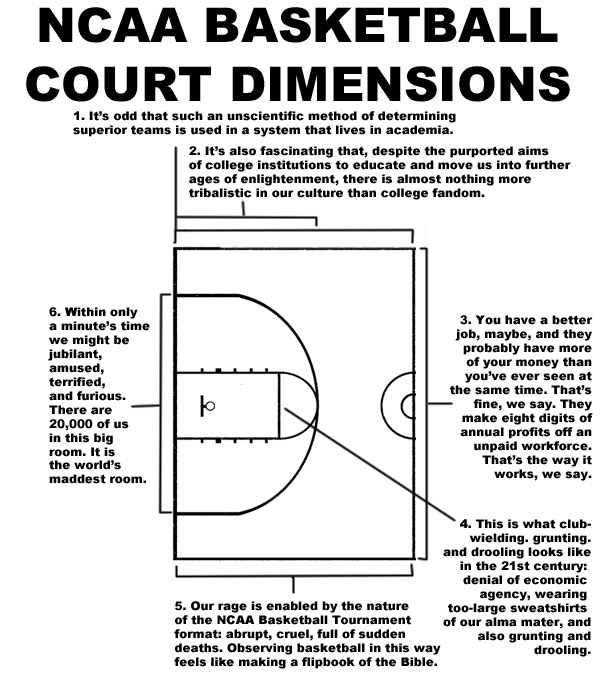 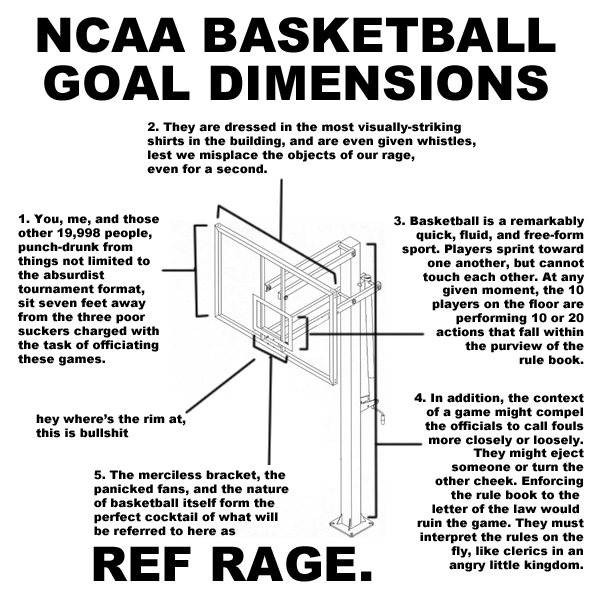 Ref rage is fan dissatisfaction, criticism, anger, et al. directed toward a basketball game's officiating crew. It can be completely rational -- sometimes a referee will clearly miss an out-of-bounds call, for example -- but it's often highly biased.

Lest all this come off as a scold, I'm as guilty of this as anybody. From the comfort of a living room, I'll freely call a ref an asshole or tell him to fuck off before I take a moment to consider whether a call was the correct one. This interests me, because this is not who I am. So during this year's NCAA Basketball Tournament, I decided to qualify and quantify ref rage.

The Best of Bois

Creating a sports video game has proven to be rather difficult

The Best of Bois

The SB Nation network features team-specific blogs for the majority of teams in this year's tourney. These teams usually post "open threads" for each game, in which fans discuss the action live as it unfolds. (It's a hell of a time.)

In the interests of providing a large sample size, I identified each blog that averaged at least 175 comments per open thread. (There were 23 such blogs.) I then re-read every open thread of every blog and searched for comments that included the word, "ref."

I documented every such comment I could find, and graded them according to a "ref rage" scoring system I improvised. I've laid it out below. All the following examples were taken from actual game threads.

NEGATIVE-5 POINTS: Self-reflection and/or remorse for prior criticisms.

Then again, maybe I shouldn't complain about the refs so much

Out of 39,914 comments searched, I believe I only counted three of these instances. It's an extremely difficult thing to ask of someone whose team is in the midst of a single-elimination struggle, in a sport as manic and referee-dependent as basketball.

A mature gesture, or perhaps just a means of signaling to others that you're an expert. That's what I do. I usually have no idea.

The refs didn't help, but if we lose, there's no way you can blame this on the refs.

Not uncommon, and commonly tethered to, "you gotta make your free throws." I don't feel comfortable with telling players what they should and shouldn't do, and think that they should miss free throws if they feel it's best for them.

Just as every stone has a beautiful sculpture hidden inside of it, every critical comment has a batshit accusation or breathless fit of rage within, and it's the commenter's job to set it free. He or she can multiply the comment's Ref Rage score by meeting one, or more, or all of the following criteria:

+1 POINT: Multiple instances of such language in the same comment.

GETTING REAL TIRED OF YOUR SHIT REFS

it was a stupid call and the refs are stupid people and I hate them.

I am not a blame the refs guy, but geez man, this has been atrocious.

There is a noble sect of sports fans among us who refuse to blame their team's failures on the officiating. You might catch them referring to one another as "fellows" or tipping their caps at one another as they enter a train car, but they prefer to remain in the shadows. But once in a dog's age, officiating is so dreadful that they have no choice but to step forward and speak the truth. If you hear from this person, you know the referees are truly terrible. (You will hear from this person in virtually every game.)

Dang a ref didn't get the last Paypal transfer apparently

Refs are just trying to make it a game.

Fans believe this all the time. This should not be confused with an accusation that there is actual corruption afoot. Rather, the refs are calling make-up fouls, or trying to keep the game exciting, or trying to go home early, or are influenced by a coach's protests. The funniest one is, "the refs are just trying to be the stars of this game," which I ran across a lot.

Refs are on the take, convince me otherwise.

PENTUPLE POINTS: Accusation of corruption and/or conspiracy on an institutional scale.

Everyone who believes that the NCAA has allowed a team into the tournament only to precisely engineer their, and only their, demise, is absolutely right and must let others know what they have discovered.

PENTUPLE POINTS: Threats and/or wishing of harm upon a referee.

Hope the refs trip, fall down a flight of stairs, and break their hips later on tonight.

Thankfully, there were very few of these. I originally assessed an enormous 25x multiplier to this one, but didn't want a few ding-dongs to foul up the numbers entirely. 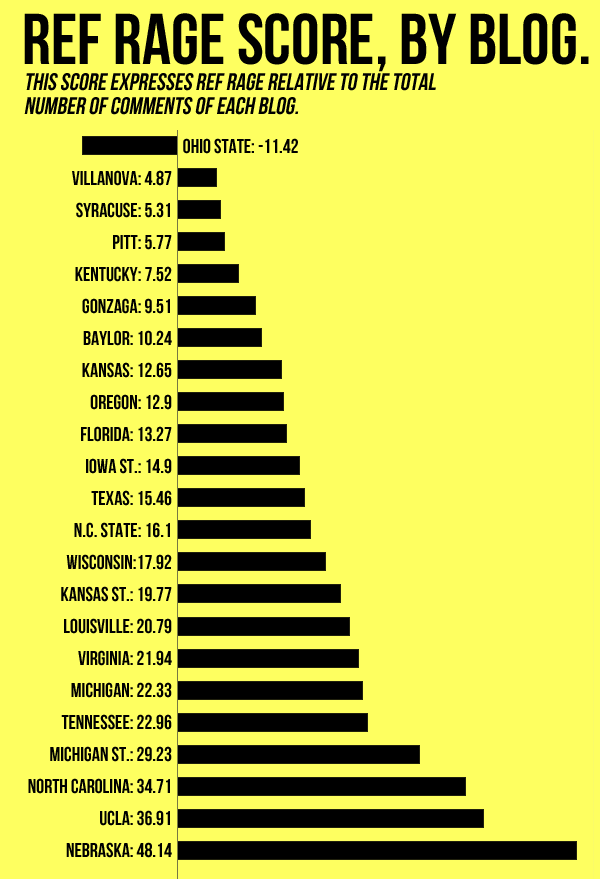 One thing that caught my eye: the typical score of the school that had "been there." Some of the highest scores belong to programs like UCLA and UNC, which have reached the Final Four time and again. But I couldn't help but note that a lot of the really low scores belong to schools -- Villanova, Syracuse, Kentucky, Gonzaga, Kansas -- that I'd identify as "basketball schools." Some such teams played far into the tournament, and others made relatively early exits, but none were particularly prone to criticizing the refs. Maybe that's because they watch more basketball, and/or maybe they rest in the knowledge that they'll be back next year.

After digging deeper, a few things caught my interest.

4. OHIO STATE FANS: THE NICEST FOLKS IN THE ENTIRE WORLD. 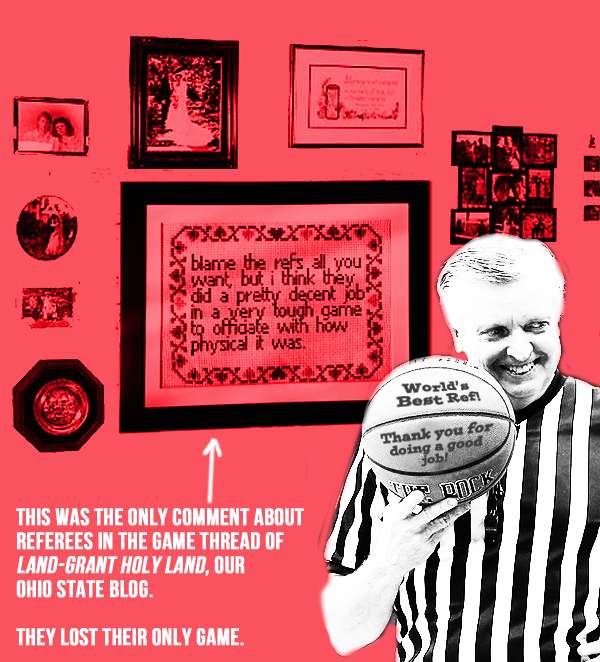 And that's why Land-Grant Holy Land was the only blog to register in the negative territory of that chart. It's Ohio State, so we can't explain this away with, "basketball school." They were just profoundly civilized and thoughtful. It's so nice to be nice!

5. NEBRASKA FANS: THE CRASS CRANK-CALLERS OF THE NCAA TOURNAMENT.

11-seed Nebraska was promptly dispatched in the first round of the tourney by Baylor, so they only had one game thread to offer. But that one game thread. Hooooo man. Their contribution to this study was so short, so angry, and so profane. It felt like a crank call. 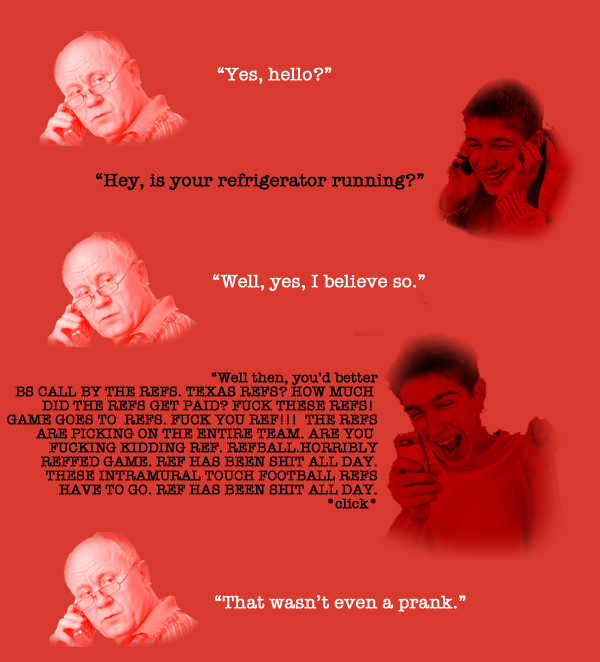 This year's tournament was actually an elaborately-orchestrated plot to pick on Nebraska basketball. Damn it, everybody, they found us out.

6. LOUISVILLE FANS: CIVILIZED, UNTIL WE WEREN'T.

Louisville and Kentucky are arch-nemeses in a basketball state with zero professional sports teams. This year, they met in the NCAA Tournament for only the second time in 30 years. Like every other Louisville fan, I was gutted by the loss, and I let out a few "FUCKIN' REFS!" for each maybe-foul they called on Montrezl Harrell.

This is our Louisville blog, Card Chronicle, and it's also me.

The commenters of Card Chronicle are a swell bunch of folks who know and love their basketball. That white line, for the first two games, represents the average SB Nation ref rage of fans whose team ended up winning. At the end, it bends up to reflect the average ref rage of the losing fans.

The first two rounds were pretty worrisome at times, but they managed to keep their ref rage well under the SB Nation average. And then, on March 28th, it all went to Hell.

Our Cards were defending national champions. It didn't matter. This was Kentucky. Fuckin' refs, y'all.

Most of the blog communities studied were capable of higher-than-average ref rage, but UCLA was the only team whose SB Nation fans remained furious at the referees throughout. 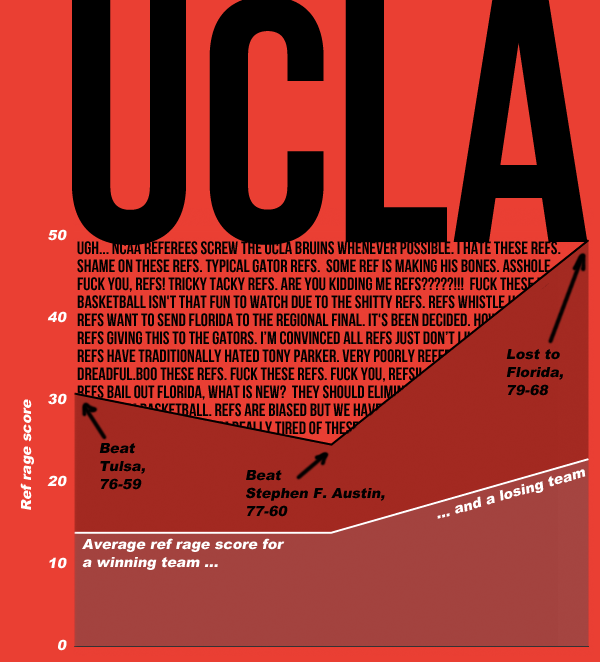 Bruins Nations' raw ref rage score throughout the tournament stands at 106. For reference's sake, the total ref rage score for A Sea of Blue, our Kentucky blog, stands at 40. This is in spite of the fact that UK played twice as many games. In fact, during their tough loss to UConn in the national championship, A Sea of Blue commented over 1,000 times and finished with a ref rage score of only 4.

This is because the referees are fans of every team except UCLA, of whom they are jealous on account of how good at basketball they are. If I were the target of a Machiavellian and supremely-improbable conspiracy, I would be angry too!

8. UCLA VS. FLORIDA: THE MADDEST GAME OF ALL.

Of every game examined, none produced more ref rage than UCLA's Sweet 16 matchup against Florida. In this game, Bruins Nation generated a ref rage score of 61. Despite seeing their team win, Alligator Army finished with a ref rage score of 16 in only 712 comments.

Both blogs, on a per-comment basis, were far madder at the refs than usual. Terry Wymer, Lamont Simpson, and Les Jones -- the officials of this game -- must be the most horrible referees in the history of basketball, right?

I wanted to gain some extra perspective on those refs, so I looked up a sample of games prior to the tournament that had been officiated by at least one of those dudes. That led me to a collection of 20 SB Nation game threads full of fans who commented on the games these guys officiated. 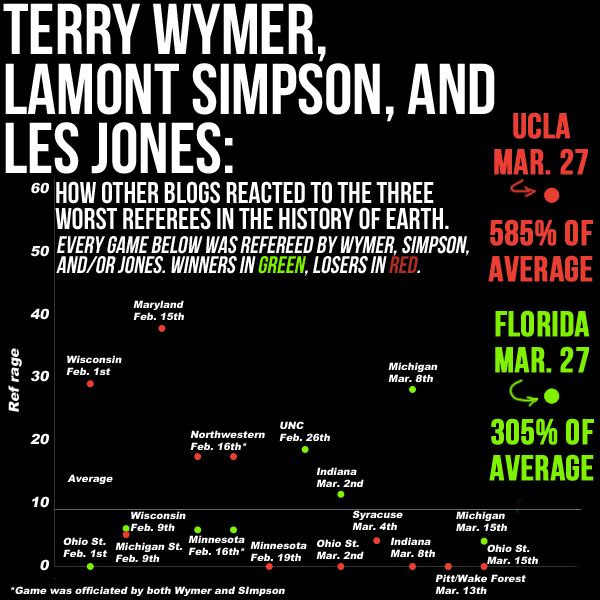 There were a few angry game threads, to be sure, but on the whole, our other blogs didn't seem to have much of a problem with any of these three officials. Six game threads finished with a ref rage score of exactly zero. That isn't a product of low sample size, either; the data in this chart represents thousands upon thousands of comments.

Sometimes, you just wanna be mad.

The following comments are some of the meanest examples of ref rage I came across. I browsed through nearly 40,000 comments, the vast majority of which were good, solid basketball discussion and/or fun times. Some were not!

If you're a college sports fan, we've probably got a blog for your team. Find yours here. We hope you enjoy.