Miguel Cabrera, Kenley Jansen, and the best at-bat of 2014 so far

If you could invent a scenario you wanted to watch, it wouldn't be much different than this one.

Share All sharing options for: Miguel Cabrera, Kenley Jansen, and the best at-bat of 2014 so far

First, let's choose the pitcher. There's at least 10,000 words in an argument about the best pitcher in baseball. Clayton Kershaw is the obvious answer, but no one knows when he'll throw his next pitch. Is Jose Fernandez there already? His first two starts hint that he's closer than we all might think. Max Scherzer might be there, or he might be the second-best starter on his team.

But if you're constructing a most-watchable-at-bat scenario, you aren't looking for the best or most valuable pitcher, necessarily. You're looking for flash and pop for one to 15 pitches. If you have a minute to watch a race, you're going with Usain Bolt over Steve Prefontaine. You want someone who throws a million miles per hour, someone with a physically impossible breaking ball.

There are four candidates:

Any of them work, but I'll go with Jansen because he's almost predictable. He has a fastball. The hitter knows what's coming and still can't hit it. It's mesmerizing.

The scenario should be a runner on second in the ninth inning, with the hitter's team down by one. You can pick bases loaded, down by three, but the simplicity of needing one run and it being right there is appealing to me.

Kenley Jansen against Miguel Cabrera in the ninth inning, with the Tigers down by one, then. That's the most watchable at-bat in baseball right now. And you're never going to believe this, but on Tuesday night, by pure coincidence …

First off, let's talk about Kenley Jansen throwing 98. He shouldn't throw 98. He didn't throw 98. It's horrifically unfair that he throws 98 now. Dave Cameron looked at Jansen's rising velocity, and while noting it was still too early to draw conclusions, he presented a velocity chart for Jansen that was definitely trending up. If the chart were a hill, my first car would have stalled halfway up.

If the increase is for real, it's not a given it will help, mind you. Jansen's fastball was the best in baseball because of the movement, the filthy, sticky, late darting and cutting that made it almost like a robo-knuckler. The fastballs Jansen threw last night didn't seem to have the same movement that I remember, but maybe it was happening too fast for my overtaxed brain to process.

Not much to this one. The count evens up, and we get to the Greg Maddux pitch. Cabrera reclaims some semblance of control in the at-bat.

This is the part of the movie where Superman punches the extraterrestrial villain, expecting to have him explode into a fog of atoms, only to get no reaction at all. It's a standard plot point, and it sets up the rest of the movie. Superman figures out the villain's true weakness and learns a little something in the process.

On the special bond between two of the most important players on the field.

What pitch is Cabrera looking for? Fastball. What does he get? Fastball. Where is it? In the strike zone. While we've come a long way with PITCHf/x and cataloging every at-bat, but we'll never have MINDf/x, which would let us know where every hitter was expecting every pitch.

We should probably have MINDf/x. If you're a scientist, and you're reading this, you're a part of the problem.

If such a thing did exist, I'd love to see how many times Miguel Cabrera missed a pitch he was looking for when it was thrown in the strike zone. Does it happen 50 percent of the time? Maybe 25 percent? No idea. But he was looking for a fastball, and he couldn't do anything with it.

This is Cabrera's best chance, and he misses it by millimeters. The location isn't bad, necessarily: 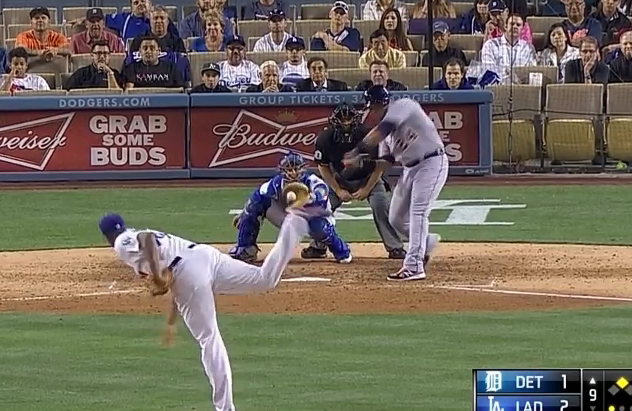 But as we've learned over the years, there isn't a good place to pitch Miguel Cabrera. He just missed it. The alternate ending, with Cabrera hitting this pitch 480 feet, will come out on the Criterion Collection Blu Ray.

An aside: If you'll look at the fans behind the plate, you'll see a Tigers hat and an A's hat. They were not asked to put Dodgers gear on because the Dodgers aren't insecure and ridiculous. Grow up, Diamondbacks. 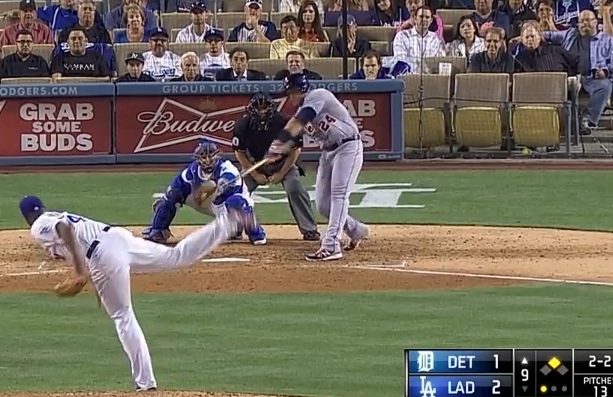 Quite late. Even though Cabrera had to have been looking for a fastball -- Jansen throws his slider about five or six percent of the time -- he was late. The best hitter on the planet couldn't catch up with the pitch he knew was coming.

What did we learn? Other than learning that one at-bat can almost single-handedly serve as an airtight argument for interleague play, we learned nothing. Absolutely nothing. It was one at-bat. Cabrera is good enough to hit the next three Jansen fastballs through the sun. But if you could invent an at-bat to be the most watchable at-bat, it would come close to this scenario. It did not disappoint.

(Jansen gave up the lead on a single to center in the next at-bat, FYI. That doesn't mean this at-bat wasn't the coolest, though. Just the coolest.)