In this episode, we are proud to bring you the return of Breaking Madden legend Clarence BEEFTANK. Our happy little man has gotten his weight down to 350 pounds, and he is here to blow the Oklahoma City Thunder to Hell.

Clarence BEEFTANK's greatest regret is that he cannot smile. Through countless hours spent across multiple video games, no system has been able to render him smiling. His face, rounder than a dinner plate, is forever set into a stout, Churchillian grimace. Other players are known to smile in Madden NFL 25 and NBA 2K14. Russell Westbrook, on one occasion, even winked at us.

It's a shame, because BEEFTANK -- the five-foot-tall, 400-pound, 76-year-old, lightning-quick cannonball of a little man -- has as much joy in his heart as anyone. He has love for everyone he has the pleasure to meet, and finds laughter in the smallest moments. He knows he has been gifted with physical abilities that surpass anything we've ever seen.

BEEFTANK became a fan favorite during the first season of Breaking Madden. For those unfamiliar, he was born in 1937, comes from a past shrouded in mystery, played college football at DeVry, and refers to multiple ounces of milk in the plural ("a glass of milks").

I initially ruled out including him in NBA 2K14 for two reasons: first, the game's creation engine would only allow me to make him kind of round, and not completely round. Second, I feared that the game wouldn't allow BEEFTANK to be true to his athletic nature: bruising, destructive, a creator of chaos.

And then the NBA Playoffs came around. The Memphis Grizzlies, the most delightfully ugly team in the Association, entered the playoffs as the seventh seed and immediately went about the business of felling one of the NBA's elite teams, the Oklahoma City Thunder.

I wanted to give Zach Randolph the powers and purpose of a wrecking ball. I turned off every foul I could, set Randolph's stats as high as they would go, and started bowling everyone over. And then I realized, "this is BEEFTANK."

Clarence's style -- or, rather, absolute lack of style -- fits in perfectly for the Grizz. I had to bring him back.

This episode of NBA Y2K will be a little different: no Twitter guest stars. I've missed y'all this week, I'll admit. But I want nothing to get in the way of the story of a too-short, too-heavy gentlemen who lays waste to the rules of physics and basketball alike.

I'm allowing BEEFTANK to rewrite the rules of basketball as he sees fit. It arrived to me in four pages of dot-matrix printer paper: 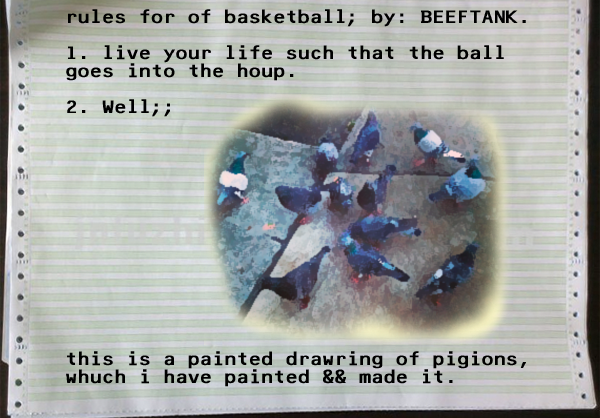 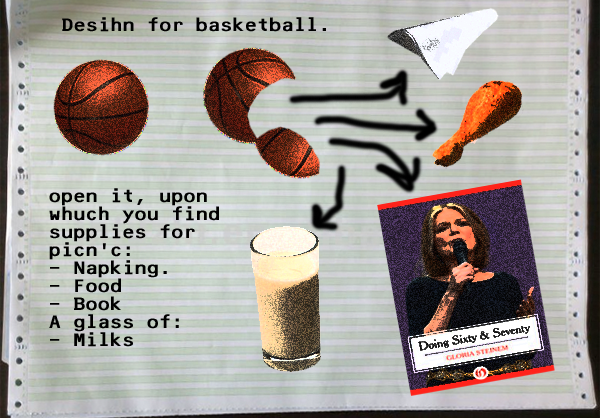 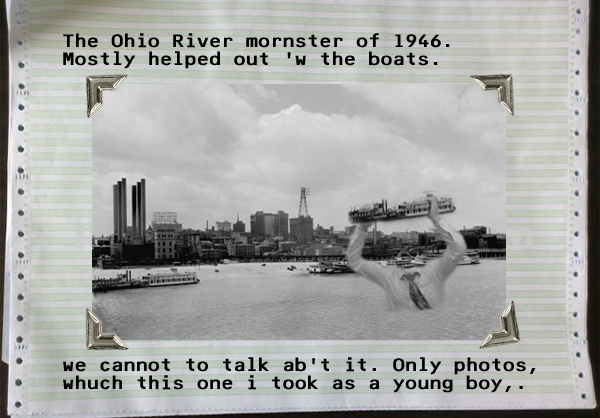 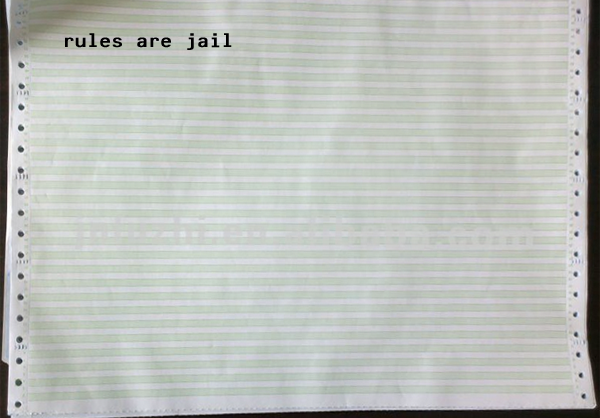 NBA 2K14 does provide an exhaustive array of settings and customizations, but regrettably, it was not robust enough to allow me to implement all these ideas. The last page, at least, is covered: I turned off out-of-bounds, traveling, reaching fouls, shooting fouls, and every other call at the officials' disposal. The rules of nature would remain, but the laws of man would be disposed of altogether.

This game is a simulation of tonight's game six, in which the Grizz will have a shot at wrapping up the series at home. I do not know what will happen then, but I know what's happening now: the Oklahoma City Thunder are being blown to Hell.

Clarence BEEFTANK's ability to elevate, which he never got to demonstrate in Madden, is unreal. BEEFTANK doesn't use a microwave, of course, as he cooks everything in a small campfire he's stoked and kept alive since 1988. (His previous fire, started in 1971, was extinguished the morning after having a bad dream in which insects crawled too close to it and hurt themselves.) Nonetheless, I found the countertop/microwave illustration to be a useful one.

I thought that was as high as he could get, but then I began exploring alley-oops.

BEEFTANK is five-foot-three in this game. (He's actually an even five feet, but NBA 2K14 can't make a guy that short. Let's just say he was watered and given plenty of sunlight.) In spite of being bent backward at a slight angle, he meets the rim at eye level. He can travel to a place where water boils noticeably more quickly just by jumping.

But BEEFTANK basketball is not simply about physical abilities, it's about wrecking fools. He usually didn't miss a dunk. But when he did, it was actually a little more appropriate, as it just added to the chaos.

The poor victim was usually Kendrick Perkins. He's listed at 6'10" and 280 pounds, and BEEFTANK played him like a shuffleboard puck.

I could have given BEEFTANK the "Highlight Reel" trait, which would have given him a set of fancy, showboating dunks to work with, but I decided that was not BEEFTANK basketball. Instead, he made do with the "Posterizer" trait. That meant, essentially, that he threw down like a meteorite. And if any poor sucker was in the way, he seemed to throw down even harder.

I had BEEFTANK on a fast break with a clear path to the rim. Kevin Durant was right there, feet planted. So naturally, I sprinted right toward him and turned on the jets.

If you'd like to understand what my week of video gaming was like, just imagine this, over and over, dozens of times. I don't hate the Thunder -- in fact, I very much like the Thunder and think that they are cool -- but this never, ever got old.

Longtime fans of BEEFTANK may recall that, as quarterback, he virtually never, ever passed the ball. I made sure that he never passes in basketball, either. I couldn't really explain to Video Game Mike Conley why this was so.

Always clapping, waving, hollering for the ball. Sorry, Mr. Conley. In your pre-BEEFTANK world, you may have been a point guard, but his mere presence renders positional assignments meaningless. I would have taken the rest of y'all off the court if the game had left me. You were once a man with a role, and now you are the tail of a comet.

Offense and friendship, of course, are only two phases of basketball. The last third of the game is defense, which BEEFTANK didn't concern himself with quite as much. When the Grizz were on defense, I would just have Clarence make big, sweeping loops around the court to gain velocity, then send him running headlong into whichever poor fellow had the ball.

I'd mash a combination of the steal, jump, and guard buttons that felt appropriate, and this ended up generating a ton of steals. BEEFTANK knocked the ball away in a number of different ways. He could even steal the ball, in fact, with his ass.

His ass, in fact, knocked it out with such force that his teammates upcourt didn't even understand what was going on. They're staring at it like it's a bird inside the Home Depot. "Hey, weird! Eh, probably not that weird. It'll find its way out. Anyways, I gotta buy joists for the joist party tonight." [buys 4,600 joists]

It may have been a new game, but it was the same story: sometimes, the physics engines just had no idea of what to do with such a round little man. "He's standing in the paint, and Russell Westbrook is driving, so ...

... let's just allow Russ to walk right through him." Every sports game, of course, will have clipping issues. Even after nearly 20 years of three-dimensional sports video gaming, it's impossible for us to ensure that someone's elbow won't go inside another guy's shoulder. I will note, though, that this -- non-playable characters exempted -- is the only time I have ever seen a guy just straight-up walk through another guy like he wasn't there.

The Thunder could pull no such tomfoolery with Grizz the bear.

God bless the ability to turn off "out of bounds," because it has granted us the glorious spectacle of a dancing bear playing offensive lineman against Kendrick Perkins. He even shifted along with BEEFTANK.

Unanswered question: what is the matter, Ed Davis?

BEEFTANK throws down a monster, and the Memphis bench erupts. David Joerger claps. Mike Miller plays an invisible kazoo with his nose. Kosta Koufos looks like his puppeteer fell out the window. Marc Gasol celebrates by sneezing on a bald man I was unable to identify and whose existence is unexplained beyond, "dude what for sneezin' on."

And right there in the middle is Ed Davis, hanging his head. Look closely and you'll see him offer a single, pitiful clap. I realize that this is only a video game, but if any beat writers are reading this: it might be a good idea to ask Ed whether anything is the matter. He has done a good job this season, and he deserves to be happy.

Last week, I had OutKast join the Atlanta Hawks and help them score 404 points in a single game. By contrast, this game's result was completely reasonable: the Grizzlies won the game, 134-84, and thereby the series. All I really wanted was for Clarence BEEFTANK to unload a dump truck of monster jams upon the Thunder's persons, and he certainly did so: by the end, the game's shot chart looked as though BEEFTANK had spilled a bowl of Spaghetti-O's in the key.

But there was still something he had left undone, and he needed one more game to do it. So I restarted the game, and at long last, he found a way to tell us what he had never been able to:

For further episodes of NBA Y2K:

OutKast join the Hawks, go for 404 points in a single game

And to catch up on Clarence BEEFTANK's football adventures:

The NFL debut of BEEFTANK

BEEFTANK lays waste to the Broncos

BEEFTANK joins the 49ers, finds his path to Self