In this episode of Chart Party, we learn three things in the wake of the NFL Draft: Teams love guys named Greg Robinson, teams don't care about stud running backs anymore, and Charlie Strong is a sorcerer.

Congratulations to the St. Louis Rams for surfacing from the miles-deep morass of America's institutionalized homophobia long enough to draft Michael Sam! It is curious, of course, that Sam -- the SEC Defensive Player of the Year -- was chosen with the 249th pick, while the other 10 winners of the award went 142nd, 17th, 33rd, 11th, 5th, 5th, 8th, 5th, 6th, and 17th.

It's true that "SEC Defensive Player of the Year" is a title assigned by humans, and not an actual statistic. And thanks to his not-great combine performance, his draft stock fell, at least in part, for the same reasons it falls for other players. Those draft pick numbers, though, are too high and too consistent for me to ignore.

To keep the mood positive, though, here's a look at all the progress the NFL is making. 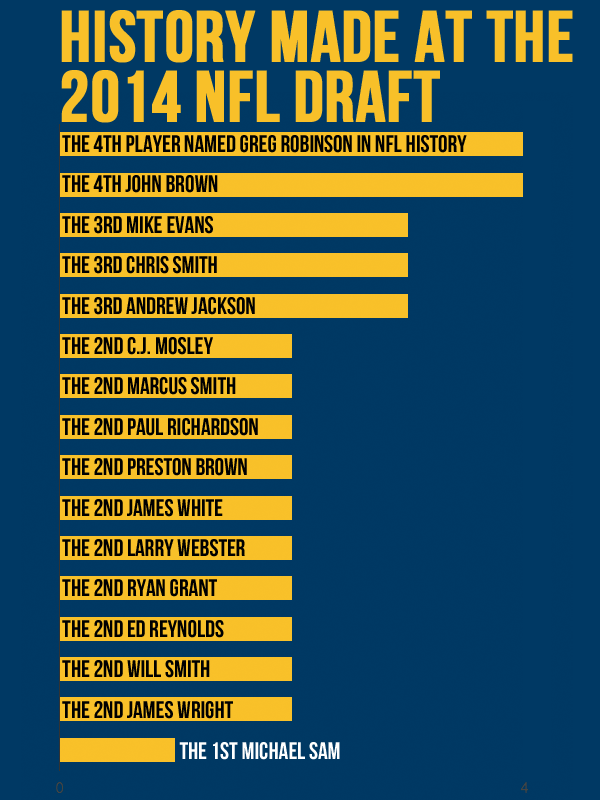 One day in the future, everyone will be named Greg Robinson, and we'll look back on our present-day, arbitrarily-named selves with morbid curiosity and outright disgust.

We will also hear about things called "running backs," and wonder what the Hell they were. 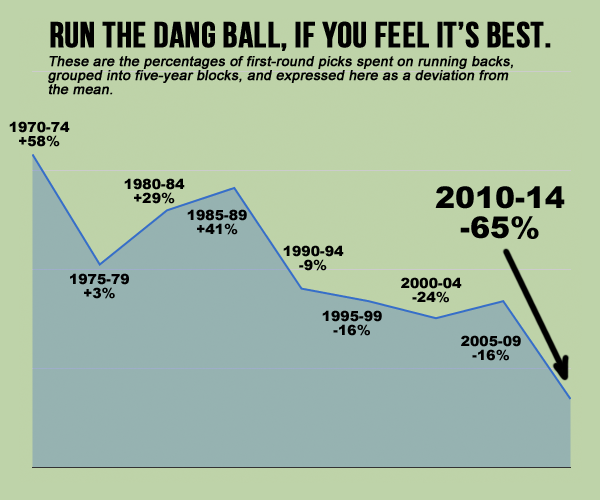 For the second straight year, we saw exactly zero running backs taken in the first round. This might be partially explained by the demise of the "stud back" -- if the job's done by two or three guys, it would stand to reason that those guys are less valuable, and are therefore drafted later.

NFL teams just aren't requiring as much of individual running backs. In 2013, LeSean McCoy led the league with 314 rushing attempts. In 2003, that total would have been good for 11th place.

The star college running back isn't going away yet

A 65-percent drop from the average is sort of stunning, especially since the trend had held pretty steady for two decades. If this trend continues, running backs will disappear altogether, and quarterbacks are just going to drop back and hand off to nobody, and the little ball is gonna roll on the ground all by itself, and it's gonna be so sad.

And finally, let's acknowledge how big Charlie Strong ought to be for the Texas Longhorns. 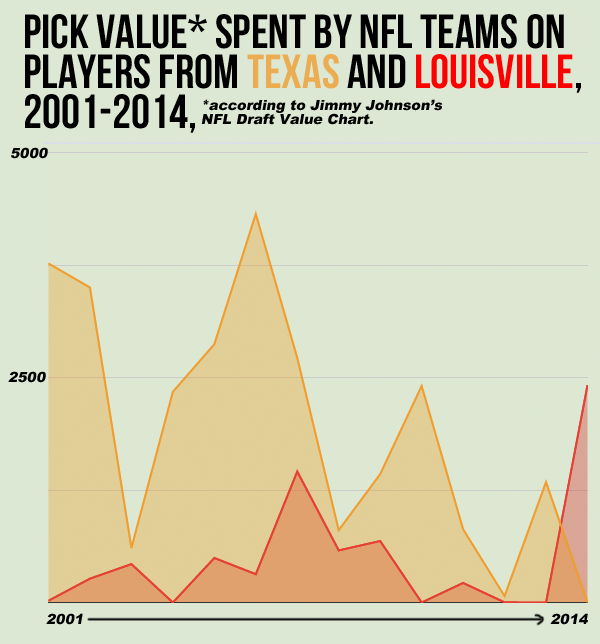 Throughout recent history, Longhorns have dominated the draft. Aside from a notable 2007 class, Louisville barely registered. This season, the trend completely went inside-out.

Keep in mind that Charlie Strong coached Louisville for four years. The very first year the Cards' NFL-bound group were made up entirely of guys he recruited and coached, that class found unprecedented success. Three Louisville players were taken in the first round alone. Strong is headed to Texas, of course, so this is probably the last time we'll be able to laugh at them in a very, very long time.

For other adventures in Chart Party, check out how little of a shit the Chiefs give about quarterbacks. Speaking of, y'all, the streak's still alive! The Chiefs haven't spent a first- or second-round pick on a quarterback in 21 years! I plan to live a long time, but the Chiefs will not win a Super Bowl until after I am dead.