The UCLA guard heads to the NBA high on tools, but low on production. You didn't have to be around him very long at the NBA Draft Combine on Thursday to see his immense talent.

Share All sharing options for: Zach LaVine gives the NBA Draft Combine a reason to live

CHICAGO -- There's an unspoken problem at the 2014 NBA Draft Combine, one that's as apparent as it is insoluble. On the brink of one of the most hyped drafts in years, the combine has more famous faces off the court than on it. What should be the league's premier scouting showcase less than six weeks before the big event has now slowly morphed into something closer to an industry convention.

Houston Rockets GM Daryl Morey is here, laughing off in the distance as someone from the shooting guard crop misfires on an unguarded three-pointer. Philadelphia 76ers GM Sam Hinkie is here too, huddled with a group of scouts between sessions. Bulls coach Tom Thibodeau sits on the baseline looking as focused and intense as ever. Sometimes it's easier to get more caught up in what's happening on the sidelines than on the floor.

The draft combine took a hit this year when top prospects Joel Embiid, Andrew Wiggins and Jabari Parker decided they had nothing to gain from being here. Most of the players projected to go in the first round are in the building to speak with teams, but aren't participating in the drills. It's noticeable.

But just as Aaron Craft mimics grabbing a rebound and throws an outlet pass to kick-start an imaginary fast break, time slows down. Zach LaVine takes the ball, accelerates in the open floor and rises off the ground with the type of explosion you won't see from anyone else in attendance.

LaVine is the draft's most intriguing piece of clay, a player with every tool you'd ever want out of an NBA guard, but one that doesn't quite know how to use all of them just yet. On a court with a group of flawed players considered fringe pro prospects at best, LaVine is the show everyone must see. As he flies up and down the court and defies the constructs of gravity with a fluidity few possess, it's easy to daydream about what he might one day become.

"I think he's going to be unguardable in about two or three years," former UCLA teammate Kyle Anderson says with a big smile on his face. "He's very good now, but once the physicality part catches up with him, I think he's unstoppable."

It might seem like too high of praise for a player who scored 11 total points in his last five college games, but the team that selects LaVine won't be doing so because of production. There could be something special here. They just may have to wait for a team and the player himself to discover it. 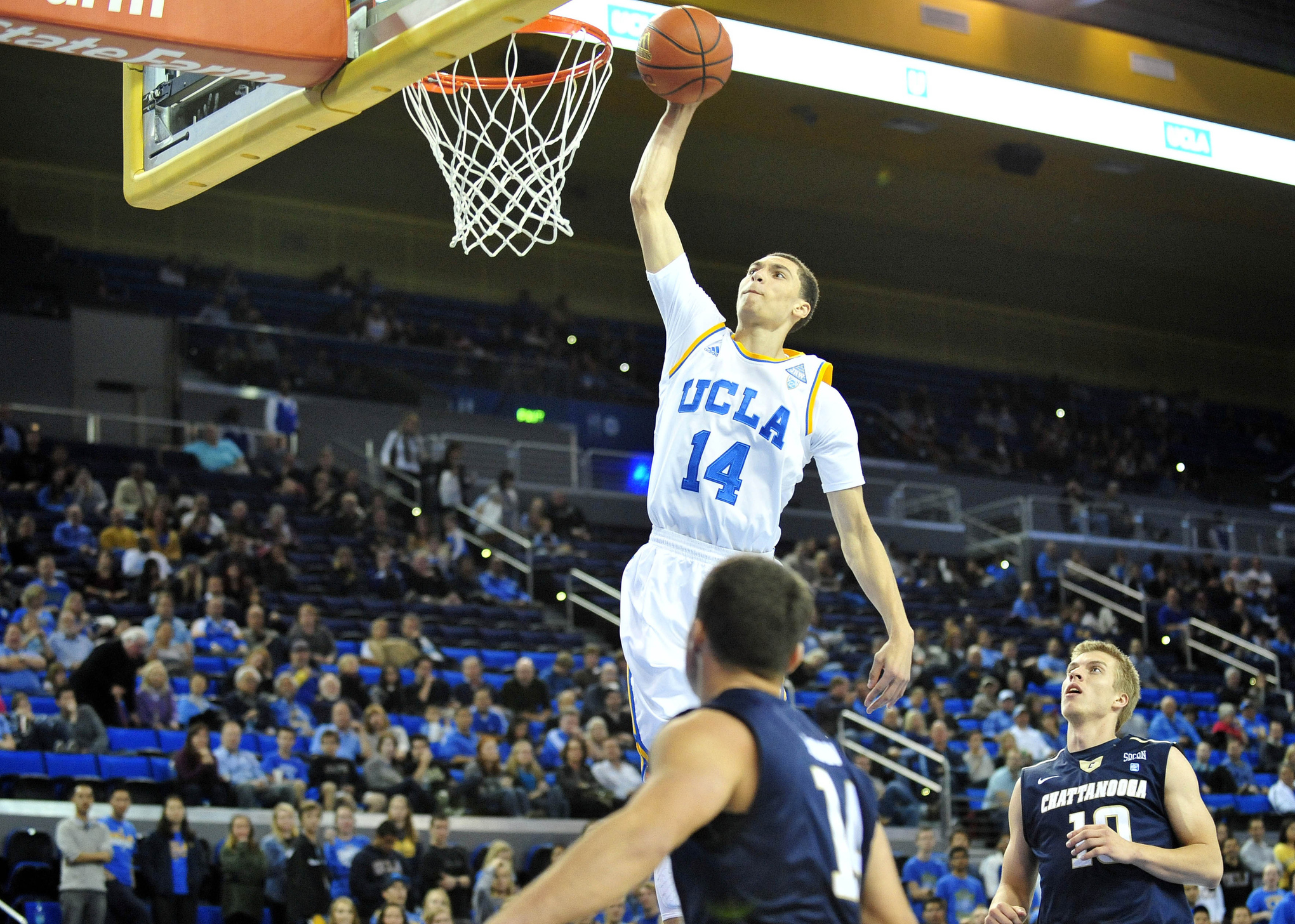 The day LaVine declared for the 2014 NBA Draft, something you don't see all that often happened: nearly every major college basketball reporter came out and criticized the decision, unprovoked. The reaction was as swift as it was ruthless.

"Amazing to me that UCLA's Zach LaVine thinks he's ready for the NBA, not 24 hours after losing," Sports Illustrated's Seth Davis said. "He's not even a decent college player yet."

"Don't see how Zach LaVine is going to have an immediate impact in the NBA when he couldn't have a major impact in the NCAA Tournament," CBS' Jon Rothstein wrote.

Never mind the obvious financial boon that comes with being a first-round pick, as LaVine is projected to be. Forget about the fact that LaVine couldn't get minutes at point guard because UCLA coach Steve Alford chose to give playing time to his son, clearly the less-talented prospect. Ignore the chance that perhaps a basketball player can develop more quickly when the game is his only job, when he's not weighed down by all of the distractions that come with being a student-athlete in the NCAA.

LaVine might not be a ready in a traditional sense, but it won't stop some team from selecting him within the first 30 picks. Players with this type of height, length, athleticism, versatility and shooting stroke don't come around very often. What happens next will be determined by the work LaVine puts in and how committed his new team is to developing his considerable talent.

"In college, when I was coming off the bench, my role was to pretty much be a sparkplug," LaVine said on Thursday. "A J.R. Smith-type of player, someone who can get instant offense. At first I was looking for my shot coming off the bench. Whether it was a three-pointer, a one dribble pull-up or getting to the cup. I just read the defense, considered the scouting report, what they had on me and went out and did it."

"I'm still 19 years old. My body is still developing. I'm not going to be one of those players that's LeBron's size at 260 pounds. I feel like I have a slight frame. But if I can get my body to where I feel like I'm strong and can compete physically with those guys, I feel like I have the speed and quickness to get into the lane and can still draw fouls."

LaVine played mostly off the ball at UCLA, but he was raised as a point guard. He practiced with the point guards on Thursday and believes he has the ability to play the position. You can't see it in his assist totals, but there were moments when his court vision flashed at UCLA.  There's a reason NBA scouts have been cautiously comparing him to another Bruin alum, Russell Westbrook. Like Westbrook, LaVine has incredible speed, quickness and jumping ability. Like Westbrook, LaVine is thought to be a combo guard because no one is sure if he's stable enough to run the point.

One thing that won't be a problem from LaVine is work ethic. While neither Anderson or LaVine commented much on why LaVine saw his playing time decrease so much at the end of the season, Anderson swears it wasn't for a lack of hard work.

There's a reason NBA scouts have been cautiously comparing him to another Bruin alum, Russell Westbrook.

LaVine kept bringing up the chip on his shoulder, one that started when he wasn't picked to be a McDonald's All-American as the best player in the state of Washington and continued when he clashed with Alford. He believes he's the type of player that wowed pro scouts in November by averaging 17.5 points on 26-of-33 shooting (78.8 percent) across four games. He wants you to focus on the way he exploded for a vicious windmill dunk against Mizzou, and later only needed one dribble to get from the half-court line to the basket for another slam.

"I'm not scared of competition," LaVine said. "I want to go through here and not have any doubts about myself. I feel like I'm a really hard worker. I'm always going be in the gym."

LaVine's basketball story is just starting to be written, and that's the way he wants it. Pass on him at your own risk. Anyone in attendance at the draft combine on Thursday knows he was one of the few truly worth watching.