Like a police officer or a middle manager, Landon Donovan has been forced out of his position before he was ready. And in his sudden absence, we reflect on both what was and what almost was for Donovan and the USMNT.

Share All sharing options for: The Landon Donovan era ends with warm memories and missed potential

When word came out yesterday that Landon Donovan would not be on the U.S. Men's National Team when it played in Brazil next month, we saw all sorts of numbers tossed out.

5: His career World Cup goals, more than Ronaldo or anybody in CONCACAF.

57: His career USMNT goals, most in the country's history.

156: His career caps for the United States.

2010: The year he carried the U.S. back against Slovenia and past Algeria.

4: The number of months he sat out in 2012-13, burned out beyond any level we could comprehend.

0: The number of goals he's scored in seven matches with the Galaxy this season.

But throughout all of the reminiscing on Twitter, the outrage, acceptance, and grief, one other number kept circulating my mind: 2009.

In the absence of titles, we have moments. It's the case in any sport, with any team. Some of us are lucky enough to celebrate championships, but the rest of us still find sports worth loving, worth following (often closely). And that's because of the ways specific moments in time make us feel and the power of those moments to linger.

The tangible moments of Landon Donovan's career are obvious. They were all shared on YouTube and Twitter on Thursday night. This 57-goal compilation is fun, and we'll always have this, of course:

Goals are visceral, cathartic. They are two or three touchdowns in one. They are small miracles. We never know when we might see another, and we know it might take a while. Donovan performed 57 miracles wearing U.S. shirts of various color schemes and levels of obnoxiousness.

But while tangible moments are felt and remembered for what they are, the intangibles give us glimpses of what could be. And there was no greater set of "what could be" moments for the USMNT than in the 2009 Confederations Cup. It was great for what it was and amazing for what it felt it could become.

There's 19-year old Jozy Altidore, bigger and stronger than most, muscling up defenders and wrong-footing the Spanish goal-keeper in the 27th minute of the semifinals.

There's 26-year old Clint Dempsey, pouncing on a deflection in the 74th minute and putting the U.S. up 2-0.

There's Oguchi Onyewu, a 6'4 mountain at centerback, heading away all aerial attacks and ushering any ground attacks away from danger.

There's Tim Howard, a 30-year old veteran and longtime Manchester United keeper, playing the match of his life (or one of them) to keep Spain from scoring.

Jurgen Klinsmann breaks down the decision to leave Donovan off the World Cup team.

There's Jonathan Spector, who donned a Manchester United jersey at 18, making one of the prettiest passes you'll ever see to set up a Dempsey goal in the first 10 minutes of the final against Brazil.

There's Charlie Davies. Oh, Charlie. Barely 23 years old and the personification of pace, he outruns Brazilian defenders down the left sideline on a breakaway and somehow curls a pass to Donovan in stride. Donovan puts the ball in the net, and the U.S. is up 2-0 on Brazil. I've probably watched this goal as many times as I've watched Donovan's Algeria goal. It was so easy. Speed creates easy chances, and Davies had more of it than anybody else.

Depth has long been an issue for American soccer, which makes perfect sense. There has only been a viable national soccer league in the country for 20 years, and soccer typically only gets whatever elite athletes remain after football and basketball have picked from the pool. But by 2009, the stockpile of athletes was growing. Onyewu could have been a masterful tight end, Altidore a running back, Davies a point guard, Bradley a safety. But they were soccer players, and they were all improving at the same time. Depth protects you from placing all your hopes and dreams into one or two players, and suddenly America had a decent amount of it. That DeMarcus Beasley, a star alongside Donovan in 2002, hadn't really developed beyond his early-'00s form didn't necessarily matter because new guys with higher ceilings had taken his place.

The best part: there was clearly still room for growth. Altidore's superb moments were followed by half-hours or hours of invisibility. Davies would run himself out of plays and run himself out of games by going too hard for too long. Dempsey was still learning where the line was between tough guy and punk. Bradley hadn't quite put all of the pieces together yet.

The U.S. did still need an otherworldly performance from Tim Howard to beat Spain, which had nearly three times more scoring opportunities. And in the end, Brazil did come back to win, 3-2. As miraculous as that Confederations Cup run was, the "run" basically consisted of three halves -- two against Spain and one against Brazil. The U.S. had only advanced to the semifinals at all because Egypt had upset Italy (which had defeated the U.S.) in the group stage. 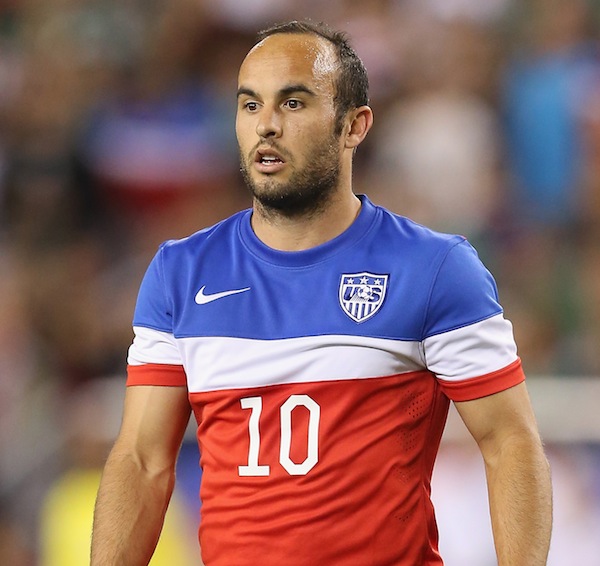 But in three halves, 135 minutes, the U.S. not only looked good enough to hang with the world's two best national teams, it looked like it was only going to get better. These key pieces were young. Hell, Landon Donovan, the face of the American national team for so long, was still only 27 himself. He had at least two more World Cups in him, right? We caught an extended glimpse of what Great American Soccer could look like -- Howard's and Onyewu's impenetrability, Davies' absurd speed, Bradley's brains, Dempsey's and Donovan's goal-scoring and leadership.

Anybody reading this knows what happened next. Davies nearly died in a terrible car accident outside of Washington, DC, that October and has yet to again play for the national team. The next day, Onyewu, who signed with A.C. Milan in the aftermath of the Confederations Cup, ruptured his patellar tendon and never got his fluidity of motion back. He played in the World Cup the next summer, but he was more liability than asset. Stuart Holden blossomed and ended the season as the best player on Bolton Wanderers in 2010-11, then fractured his femur, suffered cartilage damage, tore knee ligaments multiple times, and missed nearly two years of action. Others, like Spector, never found that final breakthrough.

And, of course, Donovan burned out, came back, and got old.

The team we thought we might see in that 2010-14 window never really appeared after the summer of 2009. The team was still good enough to win its World Cup group that following summer, and it has had plenty of moments in recent years as Bradley has become one of the world's best midfielders and other young stars have shown that same old comfortable potential. But we never got to see what we thought we would see that summer five years ago.

Retirement is treated like death. You are eulogized, and fans use the moment to reminisce about the greatest moments, and regrets, of your career. And in soccer, international retirement is forced upon you. One day, you're just not selected for the team anymore. For Donovan, like a policeman or middle manager, the end of his international career came before he was ready, before any of us were ready.

We once thought the United States' 2014 World Cup run would be the last go-round for the collective of Donovan, Dempsey, Onyewu, and Howard, perhaps after a magnificent run in 2010. Bradley, Altidore, Davies, and company would be ready to run with the torch, but we expected the window for this group of 2009 stars to remain open. Instead, only two of the four old hands made the roster. We've known for years that Gooch wouldn't; we didn't completely grasp that Donovan wouldn't until the announcement was made.

(And because life is confusing, DaMarcus Beasley did make the roster.)

The 2014 roster is young and full of pace and potential, and it has just enough elite skill and athleticism to pull an upset and/or advance to the knockout stage. But as we begin another round of "what could be" with another group of young players -- with so much young energy and pace on this team, it feels much more like 2002 than 2010 -- we are taking a moment to reflect both on what was and what could have been. Landon Donovan provided so much of the former, and his supporting cast provided even more of the latter.