Is this a sandwich? Spilly, Albert Burneko settle the debate

Spilly makes sandwiches for the Eastern Conference Finals with a twist: The sandwich validity is questioned and judged by Foodspin's Albert Burneko.

Share All sharing options for: Is this a sandwich? Spilly, Albert Burneko settle the debate

Hello Internet. It's almost the NBA Finals, and the matchup we've been expecting in the East has materialized. To celebrate, I'm making sandwiches for Miami and Indiana. Miami's Cuban sandwich was a lock, but Indiana required a bit of creativity. But let's not get ahead of ourselves -- there's an emergency to deal with at present.

Do you enjoy sandwiches? Yes, of course you do. We have an immense problem on our hands: Underworked office employees of the world are arguing day and night about sandwich purity. They rove the barren landscape of the Twitterweb, judging and condemning portable meal items as they see fit. It's nothing more than a kangaroo court of wanton lunchtime hatred. A hot dog? Sandwich. Taco? Not a sandwich. We need order here. We need a panel of judges to adjudicate important sandwich designations. That's why I've recruited fellow noted sustenance consumer Albert Burneko from Foodspin to help me finally lay down what is and is not a sandwich.

Before we get to Miami and Indiana's sandwiches, I've made two other common sandwiches as a baseline. I will present my recipe and opinion, and Mr. Burneko will render his verdict on sandwichdom.

We begin with the humble chicken sandwich. Originally, my idea here was to purchase a delectable Kentucky Fried Chicken Double Down -- a visionary offering that dispenses with the "bread" and "dignity" and leaves you with what you desire in a sandwich: fat, meat and meat fried in fat. Sadly, the local KFC by Chateau d'Spilly had closed forever, and the nearest one was an hour's drive. I realized that I would need to create my own. Of course, I've improved upon the masterpiece.

1) If you are unaware, the Double Down consists of two fried chicken "filets" (pronounced "patty"), bacon, two cheeses and a SPECIAL SAUCE. I happen to have just the thing for that last one: 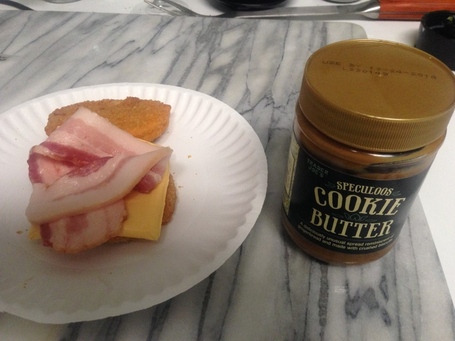 Now then, all of these items are frozen or raw, so we'll need to cook them all at once. Only rubes cook things "separately" when all the items can fit into a microwave at once. Be careful not to overcook it! 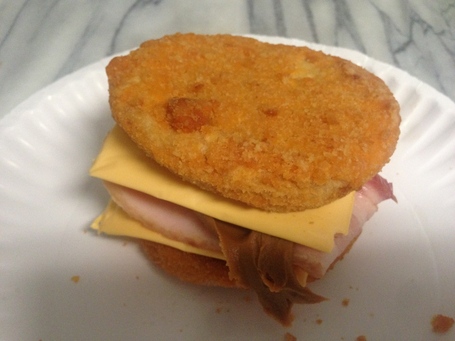 Yum! Everything looks to be in order. Now put it in your microwave, hack the control panel, change the time encoding to hexadecimal, and cook the sandwich for FF:FF. When it starts glowing, flip and continue.

You should end up with: 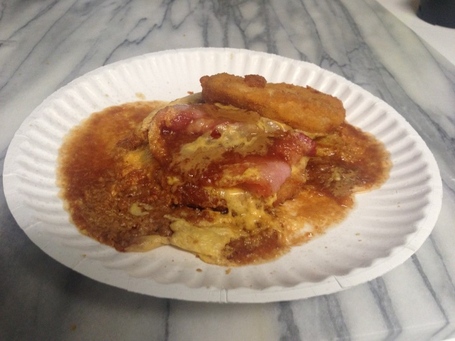 A delicious improvement upon the Double Down, if I do say so myself. But is it actually a sandwich?

My argument: Of course it's a sandwich. There is meat and also cheese. KFC calls it a sandwich already and who are we to argue with them?

Judge Burneko's verdict: Is a breaded chicken cutlet a sandwich? Think about it: It's a sheaf of meat enclosed by bread, in a manner of speaking, which is to say that "breading" has the word "bread" in it, which evidently is close enough for many commentators. If a breaded chicken cutlet is a sandwich, then the KFC Double Down is two sandwiches mashed together with bacon, cheese and gross-flavored mayo between them -- and that, I guess, is maybe a sandwich?

So, back to the question: Is a breaded chicken cutlet a sandwich? The answer is no.

That is not a sandwich.

The second sandwich I have for you today is a simple corned beef sandwich. I'm going to be upfront with you, Internet. I've never had corned beef. I tend to strongly disagree with anything brined. But I realize that it's important to you, and I live to serve your sandwiching needs. Let's see how to do this: 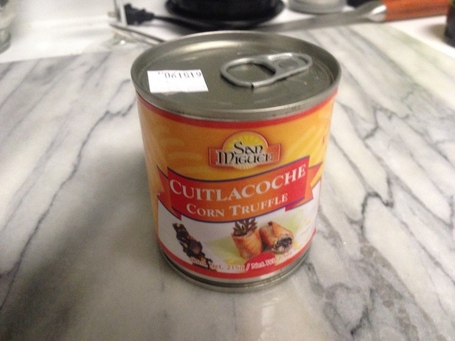 Cuitlacoche! Oh, that's cute, you've called it "Corn Truffle." Do you know what that actually is? It's disease. No really, it's infected corn. THE TITLE OF THAT WIKI ARTICLE IS "CORN SMUT." If you do not care to read it, here is a small sampling:

Although it can infect any part of the plant, [the disease] usually enters the ovaries and replaces the normal kernels of the cobs with large, distorted tumors analogous to mushrooms.

Listen friends, I have made a great deal of things for you. I've opened questionable containers. I HAVE BLENDED BISON TESTICLES AND HAD TO PICK BALL PIECES OUT OF BLENDER BLADES. I've never been more apprehensive of an ingredient than this.

But we can agree that it's corn, right? So let's move on. Mix it with cornmeal in a bowl. 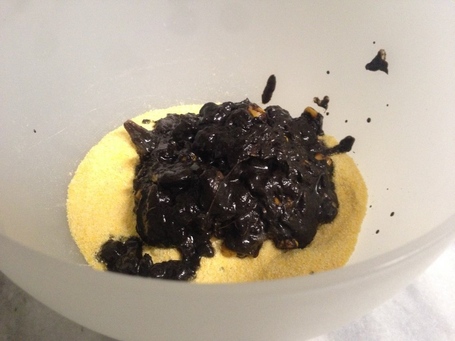 Now you're going to need to form a dough with your hands. Make sure to spread the disease evenly throughout the cornmeal mixture. Form into patties. 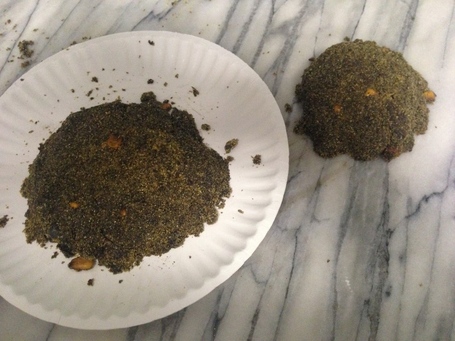 Now that your sandwich bread is completed, we just need the beef portion of the corned beef. Well you can get that anywhere. I chose to visit my friendly quarter-pounder dispensary for mine: 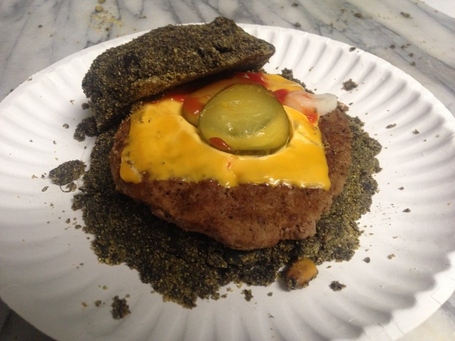 And really, that's all there is to it. It even has condiments! And one singular onion shard. VEGGIES! But is it a sandwich?

My argument: It fulfills all of the prerequisites: there's bread, and there's inside stuff. I'm not sure how this could not be a sandwich. Maybe because it's chock full of disease?

Judge Burneko's verdict: That ... is a sandwich! A horror sandwich.

Let's move on to the real show. It's Pacers vs. Heat, so we have themed sandwiches for each. First off is the Heat, and a Cuban sandwich. I've done this before when I put ingredients for a Cuban into some cookies. Now we're going to make that sandwich properly. It's pretty easy, right? Ham, Swiss, pickles, mustard, bread. It couldn't be any easier.

To start, we'll make some pickles. I foolishly used my reserve pickle in the last recipe, but no matter. A pickle is just a cucumber submerged in something intensely nasty, right? 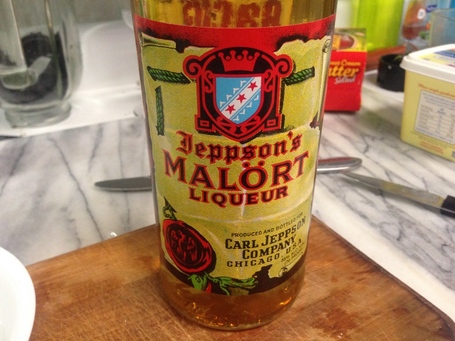 Do you realize how long I've been holding on to Malört? It was sent to me by a friend in Chicago, and it is truly, truly vile. Imagine if someone blended up a thousand asses into a bottle.

Anyway, yes. It's terrible and you should all have some. Let's pickle stuff with it! 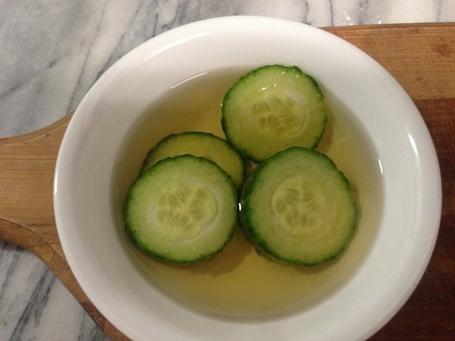 Let that sit for seven days in a cool, dry place. Don't worry, even bacteria won't touch this stuff.

Next up, we're going to make our own sandwich roll! I went to the store specifically in search of a quick roll of bread I could make easily. 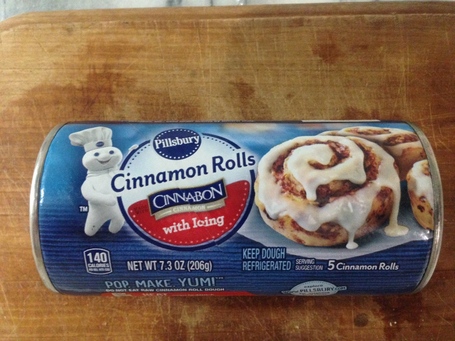 Fantastic! Don't bother separating them. Just mash them all together into a ball and place in a baking dish. Before you bake it, make sure to include one of the other important Cuban ingredients: 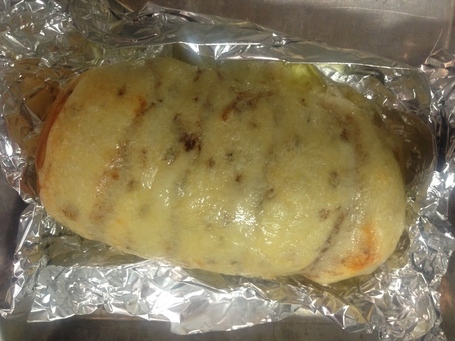 Mmmm. Cinnamon rolls covered in Swiss cheese: a hearty roll for a delicious sandwich. Moving on!

Ham! Most importantly, it needs to be tiny pieces of ham. It doesn't make sense to just pile on an entire shank of ham on some cinnamon rolls and call it a sandwich. Once again, I was gifted with the perfect ingredient here, by Twitter compatriot @iplaythetuba. 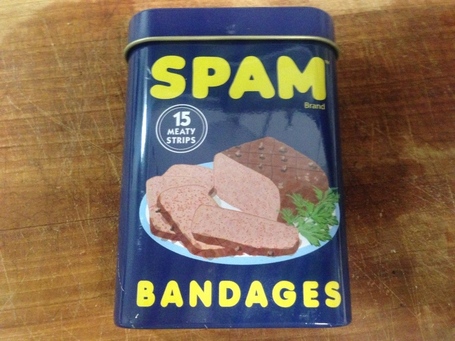 Fifteen meaty strips of Spam! It's probably like those Listerine breath strips: tiny wedges of super-concentrated jello meat that melts in your mouth. I'm so excited to open this up and put them in our Cuban sandwich. 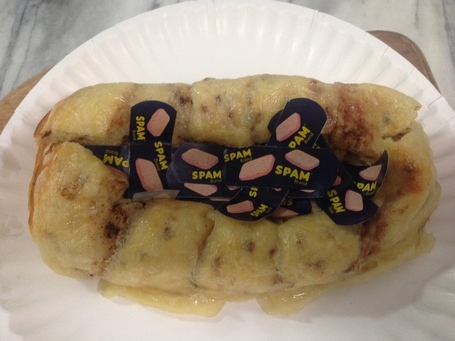 Afterwards, remove the pickles with a set of tongs and a hazmat suit and place them (with mustard!) onto the sandwich. 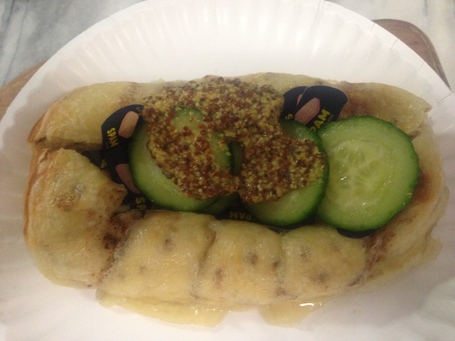 That looks to be the best thing I've ever made out of plastic strips masquerading as meat products. And the Malört is hidden, like an assassin. Sure, you think you've got a healthy cucumber, and then BAM, DEATH VIA TURGID POISON CIRCLES. But is it a sandwich?

My argument: It's very obviously a sandwich. It has artisanal pickles! And the meat is shaved super thin. Because it is plastic.

That is a sandwich.

I'm really proud of this one. I think it captures the nuance of the flyover state with the utmost care and attention it deserves. As a helpful nutritional guide, I've also enclosed a caloric count in case you're watching your waistline. Onward!

First, let's grease a pan with some nonstick spray. We don't want our sandwich to stick to anything when it's fried. Total Calories: I dunno, 2?

Next, assemble a pile of butter. Real butter too. Not that fancy "low-fat" margarine. Hippie butter, I call it. Probably. 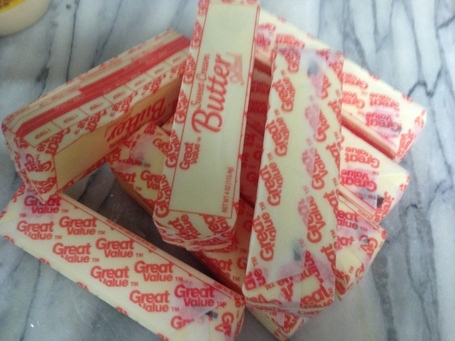 Now, unwrap all of the butter. You might want to put down a ton of paper towels for this recipe. Just do it and you'll thank me later. And just ... know that everything you own will smell like butter for hours after this. Maybe you're into that. That's cool, I support alternative lifestyles. Just keep the butter away from your pants and/or Snapchat.

Mash 3 sticks of butter together as shown: 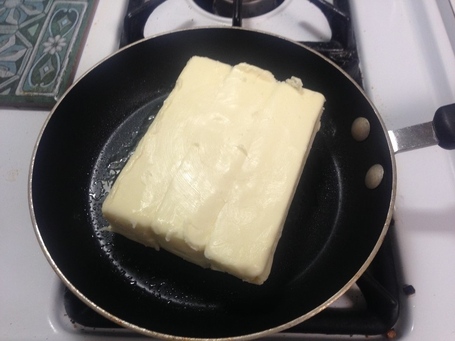 What you see before you is what the Midwesterners like to call "a piece of bread." Total Calories: 2,432

Don't start up the heat quite yet! You don't want to melt your bread into liquid. You know. Yet.

Next, we'll apply the most important Indiana ingredient: 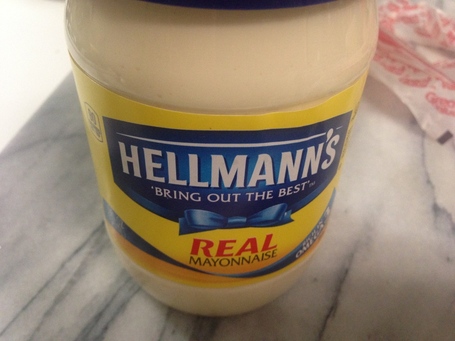 REAL Mayonnaise. REAL MEANS BETTER. IT MEANS CALORIES. Put a half cup of this onto your sandwich. Spread it around using a spatula or the back of your hand or just mash your face into the mayonnaise and slosh it around in a circle. Total Calories: 2,890 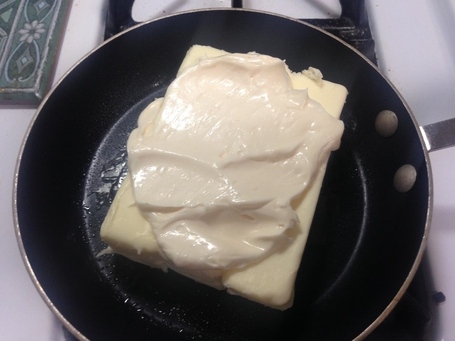 Any good sandwich requires a delicate balance of flavors to truly stand out. Right now we have heavy butter and heavy mayonnaise. Let's balance this with some heavy cheese. Or an entire pack of heavy cheese.

I've unwrapped 16 slices of cheese here just to give you a baseline. Some of you may like it cheesier! If that's the case, delicately place a block of Velveeta vertically on top of the mayonnaise. Warning: Your caloric intake may vary. Total Calories: 3,850 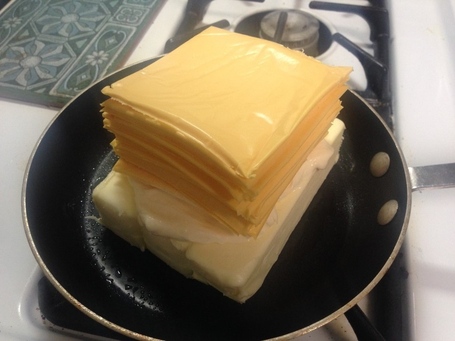 Lastly, this is no open-face sandwich. We'll need another slice of bread on top. Make with the disconcerting squishy butter noises as you press the sticks together and: 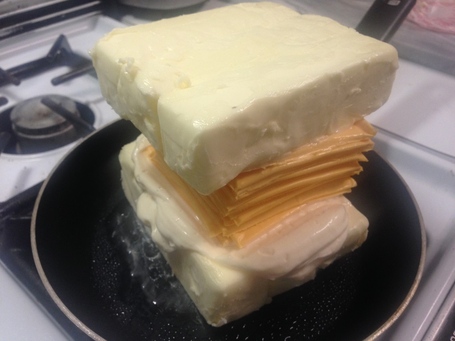 Slowly turn on the burner. You have enough stored energy in this pan for a small-scale nuclear weapon. Let's not take any chances here. 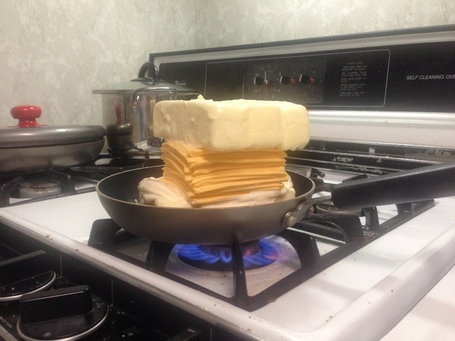 At some point you must flip your sandwich in order to fry the other side. Luckily, we've coated the pan in nonstick spray in the first step so flipping it with your spatula should be easy. Reach around your tremendous gut and flip that butterwich. 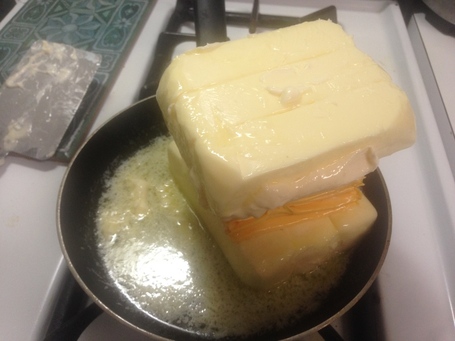 We've lost some of the bread to the pan. That's really the cost of doing business here. I like to serve the sandwich in the pan itself, just so my guests can enjoy the extra buttery aroma and flavor. I also include a straw, in case they want to sip on the drippings as a light refreshing beverage. Total Calories: Basically Six Consecutive Heart Attacks

But is it a sandwich?

My argument: I mean, probably not.

That is not a sandwich.

Thank you, Albert, for your patience and kindness. As always, you can check him out over at Foodspin for recipes that are real and do not murder you. And please serve these sandwiches to your friends while you watch the NBA playoffs. 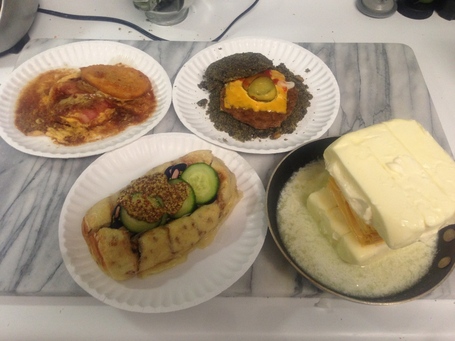