As Mayweather vs Maidana glove controversy continues, Floyd's manager says 'no fight' as it stands

Floyd Mayweather's camp has stated that they consider the fight with Marcos Maidana off, unless the Maidana camp agrees to not wear commission-approved Everlast gloves.

Share All sharing options for: As Mayweather vs Maidana glove controversy continues, Floyd's manager says 'no fight' as it stands

The drama surrounding the gloves to be worn by Marcos Maidana against Floyd Mayweather was not resolved overnight.

Last night the camps met to review the gloves to be worn when the Mayweater camp objected to a pair of gloves that Maidana planned to wear for tonight's Showtime pay-per-view bout. The gloves in question were a custom made pair of powder blue Everlast MX. Their objection centered around the padding in the gloves and that it was too easy to manipulate to move padding away from the knuckle area and to the wrist area, thus keeping the gloves 8 ounces, but allowing for a harder punching surface.

The Nevada State Athletic Commission (NSAC) agreed and said that they would not allow the gloves. The Maidana camp switched to the "stock" red Everlast MX gloves. These were approved by the NSAC, but the Mayweather camp continues to object, saying that they aren't going to fight if Maidana wears the Everlast gloves.

Team Mayweather is attempting to force Maidana to use Grant gloves, the same that Mayweather uses. Everlast are known as "puncher's gloves," preferred by most of the sport's heavy hitters while Grants are a favorite of men like Floyd, who have a history of hand injuries.

It appears that the Maidana camp offered to compromise by wearing a pair of Cleto Reyes gloves, but Mayweather's camp objected to those as well. Reyes gloves are probably the most "puncher friendly" gloves in the top end of the boxing glove market, so it makes sense that the Mayweather camp would object to them if they were objecting to Everlast. 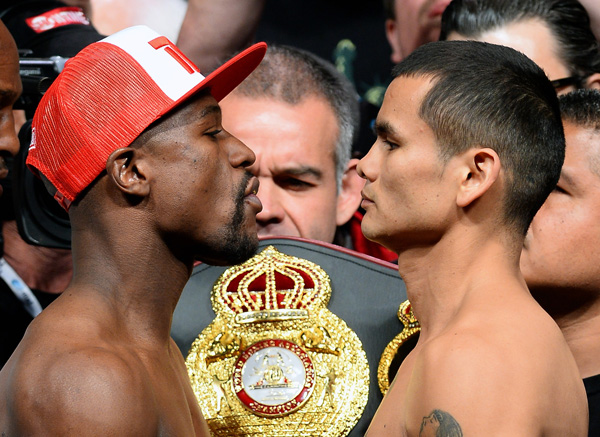 The issue here is that Mayweather's camp literally has no leg to stand on here. The NSAC approved the stock Everlast MX gloves, that means Maidana can wear them. That's really the end of the discussion as far as the Maidana Camp responsibility extends. They have gloves they want to use, the commission has approved them.

The Mayweather camp is stating that they will not fight if they don't get their way. In the video above, Mayweather's manager, Leonard Ellerbe, is asked about the approved red gloves and what the status is and states, "The story is that we're not...there's a dispute. We're not fighting in gloves that doesn't have any padding in them."

He is then pushed again, asked if the commission approved the red gloves, and Ellerbe states, "the commission didn't approve the blue gloves that he tried on." Before calling it "embarrassing" that they tried to use the blue gloves, eventually walking off saying "we not fighting tomorrow."

The blue gloves are out of the discussion at this point, so the media should have pushed harder on that distinction. But they left it at that, and there is no fight as of now.

Let's be real, though. This is a massive event which stands to net Mayweather somewhere in the neighborhood of $50,000,000. They're also completely on the hook if it falls through, given that the commission (again) has approved the stock Everlast gloves. The fight will almost certainly go on because there's too much to lose if it doesn't.

Maybe the threats get Maidana to switch away from a "puncher's glove." Maybe the Mayweather camp offers financial incentive for the switch or maybe the Maidana camp holds strong.

Either way, we'll have updates as the situation progresses.

Next Up In Boxing News & Results