Chart Party: The Chiefs do not know how to draft quarterbacks

Welcome to the first installment of Chart Party, a recurring series in which we graph out the funniest, coolest, weirdest, and/or most depressing sports things we can think of. First up: the Kansas City Chiefs' stubborn refusal to ever draft a quarterback who is worth anything.

Share All sharing options for: Chart Party: The Chiefs do not know how to draft quarterbacks

No player can change a team's fortunes greater than a quarterback. About half the time, a quarterback is the first overall selection of the NFL Draft. Historically, they've been prioritized by every team on draft day. Except for the Kansas City Chiefs, who do not give a shit. 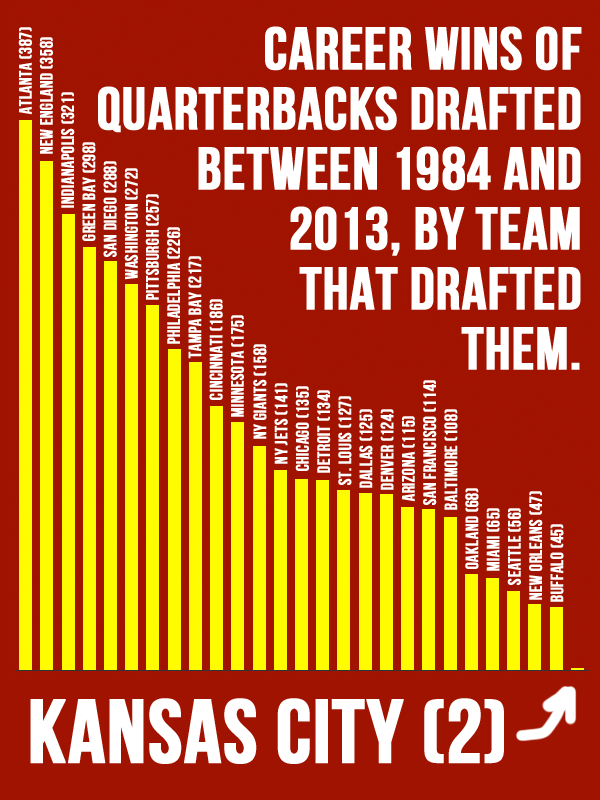 (Update: I forgot to add a note here. Only teams that were around for all 30 years are graphed above. Numbers for those who weren't: Tennessee 206, Carolina 109, Jacksonville 81, Cleveland 50, Houston 26. All way more than the Chiefs.)

Also, those two wins were for other teams.

Presently, the Chiefs have a perfectly fine quarterback in Alex Smith. In the 2000s, they enjoyed five terrific years from Trent Green. Joe Montana finished his career in Kansas City. Those guys were drafted by other teams, as has nearly every single quarterback they've started since I've been alive.

Brodie Croyle is the only quarterback the Chiefs have both drafted and started in the 21st century. Between 2007 and 2010, he started 10 games. He lost all of them.

Although the Chiefs are negligent in drafting quarterbacks at large, I'll tell you what: They have cornered the Steve market. 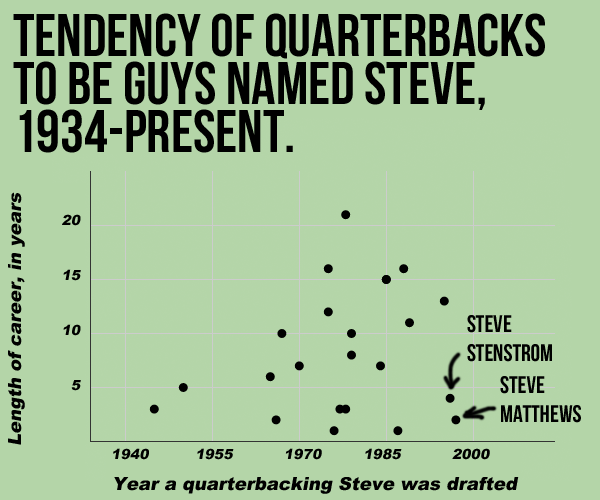 Steves Stenstrom and Matthews are the last two quarterbacks named Steve to be selected in the NFL Draft. The Chiefs selected both of them, which suggests to me that their bad quarterback karma ruined it for all the Steves.

Additionally, the Chiefs drafted Steve Fuller in 1979, and started several seasons with Steve DeBerg and Steve Bono. This means that of the 23 Steves represented in that chart, five were Chiefs.

To find the last game Kansas City won with a quarterback it drafted, we have to go all the way back to the Reagan Administration. On September 13, 1987, the Todd Blackledge Chiefs eked out a 20-13 win over the Chargers. And even then, Blackledge didn't really deserve the credit: He completed 6-of-15 passes for only 79 yards, with no touchdowns and an interception.

A win's a win, though. Let's take a look at how long it's been since all the other NFL teams won with a quarterback they drafted, and what football video games looked like all those year(s) ago.

This is notable, because if rumors are to be believed, history could be made during this year's NFL Draft. From NFL.com:

NFL Media Insider Ian Rapoport reported Monday that contract negotiations with Alex Smith aren't progressing well, leading the team to consider selecting a quarterback in the first round, according to sources familiar with Smith's situation.

Teddy Bridgewater's draft stock appears to be plummeting. As a fan of both the Chiefs and the Louisville Cardinals, seeing him land in Kansas City will be unreal.

For much more in the way of NFL Draft misery, here's a big, long, chart-heavy feature on how terrible everyone is at drafting, and how really, really terrible Matt Millen was at drafting.