NHL stats: How to measure forechecking and puck retrieval off the dump-and-chase

Stats on who recovers the puck after a dump-in add another piece to the puck possession puzzle.

Share All sharing options for: NHL stats: How to measure forechecking and puck retrieval off the dump-and-chase

For years, enthusiasts have been tracking things by hand to supplement what we find in the box score: scoring chances, zone entries, zone exits, time on attack, shot quality, and so forth. As I wrote a while back, there is little direct information about off-puck performance in these stats; if your team is on the attack whenever you're on the ice, that implies you're doing something right, but the attack time stats don't directly record that.

This year, I asked Jessica Schmidt (who tracks the Flyers zone entries) to add some off-puck information to her data. In the previous article we dug into a defensive aspect; today we'll talk about an off-puck offensive contribution.

The zone entry data we've traditionally collected shows us which players help their teams get more time on attack by carrying the puck into the offensive end. But that's not the only way to establish an offensive zone possession, of course; I wanted to also look at which players most frequently recover the puck on a dump-and-chase play.

Each time a Flyer dumped the puck into the offensive zone this year, Jess watched to see whether the Flyers were able to regain the puck before the opponents cleared it. If they did, she made a note of which Flyer was responsible.

Through 75 games, at 5-on-5 the Flyers had 2246 dump-ins that were a legitimate attempt to create offense (i.e. excluding plays where they just dump the puck in to get a line change and make no real attempt to recover the puck). They got 530 shots (including shots that miss the net) on those 2246 plays, an average of 0.24 shots per dump-in.

• Replacement goaltending • Zone entry matchup: Giroux vs McDonagh • Measuring defense
• The Corsi arc of a career • The setup man gets better with age

That rate of generating shots isn't out of line with what we typically see around the league, but it's definitely on the low side (see Table 1 of this PDF). Is that because they didn't recover as many of their dump-ins as most teams do or because they didn't efficiently turn recoveries into shots?

Unfortunately, we can't answer that yet. Jess' data tells us that the Flyers recovered the puck on 51.8% of their dump-and-chase plays at 5-on-5, and that they averaged 0.46 shots per play where they recovered a dump-in. Since their overall shots per dump-in was low, at least one of these component factors must be low, but we can't tell which one until we have this sort of data for other teams.

We can, however, compare across players on the Flyers. Are there some players who are better than others at recovering dump-ins?

Since 90% of the recoveries were by forwards, I'll focus on their numbers here.

There are a few minor surprises in that list, but in general the list doesn't seem crazy to me. Still, if we want to know what to expect of the players going forwards, we need to look at how repeatable the stat is. (I say this often, but I can't stress enough that as a reader, you should demand this of anyone who ever offers you a new stat.)

Unfortunately the news there isn't so good. Here's a plot comparing the top 12 forwards' recovery percentage in odd-numbered games versus even numbered games: 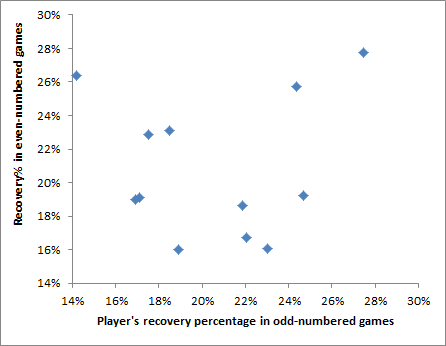 Instead, we just see a big blob of dots; a forward's recovery percentage in odd-numbered games is essentially worthless for trying to guess how he did in even-numbered games.

The recovery numbers we're looking at really do measure what actually happened in the games we watched, but they don't seem to be useful for predicting what's going to happen in other games. Which, in turn, means they probably don't really tell us much about the players themselves -- what we're looking at here appears to be heavily impacted by random fluctuations.

Well, the amount of spread between players that is due to random fluctuation is largely a function of sample size. We're looking at about 300-400 events here, which is enough that the margin of error would be something like +/- 4-5%.

So when almost all of the forwards are clustered within a spread of two or three points, it's hard to be terribly confident in those rankings.

It may be that some Flyers forwards are better than others at retrieving the puck on dump-ins. But if so, those differences in ability are small enough that there's no guarantee that the guys who are better at it show up at the top of the list at the end of a single season.

what we're looking at here appears to be heavily impacted by random fluctuations.

Is that a surprise? Well, I guess I have to admit I'm surprised by it; after all, I wouldn't have suggested tracking retrievals if I'd been confident they'd turn out to be so random.

But I'm not sure it should've been a surprise. After a dump-in, teams have to recover the puck to generate a shot. If some players were retrieving a lot more pucks than others, I'd expect the team to get a lot more shots per dump-in when the good retrievers were on the ice. But we've seen before that shots per dump-in isn't very reliable (see Table 2 of this PDF), so it makes sense that we aren't seeing huge disparities in puck retrieval.

Strength along the boards and ability to dig pucks free often comes up in discussion of a player's skillset. On this data set alone, I'm not prepared to draw any strong conclusions -- we're looking at only a dozen players, after all. But evidence is increasingly mounting that puck possession is driven much more heavily by what teams do to generate effective zone entries than by what they do after entering the offensive zone.