Why was Damian Lillard so open on his buzzer beater to beat the Rockets?

Damian Lillard's shot to beat the Houston Rockets will forever live on in NBA Playoffs history, but how did he get so open? It was through a combination of great individual play and poor Houston defense.

Share All sharing options for: Why was Damian Lillard so open on his buzzer beater to beat the Rockets?

I've had the opportunity to write about various after-timeout plays for most of the NBA season. ATO design. ATO execution. How to defend them. What works. What doesn't work. Which coaches are best at drawing them up.

But all the best ATOs have extremely talented players reacting to what the defense has given them like a great actor reacting to an inspired improvisation. For all of the brilliant ATO coaching X's and O's, success usually comes down to incredible individual talent molded into team execution.

Portland Trail Blazers coach Terry Stotts has been a repeated "ATO of the Week" winner this season. Stotts has shown a creative mind while identifying opponents' defensive tendencies and exploiting assorted favorable mismatches. He's used excellent screen-the-screener action, weak-side misdirection, over-the-top alley-oop plays and even the inbounding man becoming the shooter ("The most dangerous man on the floor," in Hubie Brown parlance).

But in this week's ATO situation, the game winning -- nay, series winning -- action was the result of an All-Star player recognizing an instant opportunity and using his speed and skill to destroy an ill-prepared defense.

How did Damian Lillard get so open? Let's walk through the play.

After a crazy series of plays that ended with Portland's Robin Lopez bumbling a rebound right into Chandler Parsons' handsome hands for the go-ahead bucket in Game 6 of the first-round series, Portland called timeout with just 0.9 seconds remaining on the clock. The Blazers were two points down with just enough time for a potential catch-and-shoot situation.

Portland came out of the timeout with Nicolas Batum taking the ball out of bounds at the 28-foot mark. Houston went big on the inbound, with Dwight Howard blocking the sun. LaMarcus Aldridge set up at the low block and was covered by James Harden. Yes, James Harden, the defensive sieve. The Portland guards -- Wes Matthews, Mo Williams and Lillard -- were set up in a diagonal line on the far side of the floor. They were covered by Parsons, Jeremy Lin and Patrick Beverley, respectively. This meant Beverley was on Lillard.

While wise sage Hubie Brown was giddy on television that Houston was putting Howard's size on the passer, Parsons recognized that this defensive setup was a little off. He started scrambling across the floor yelling before official Mike Callahan could hand the ball to Batum. Head coach Kevin McHale has also recognized things might be off with Harden on Aldridge down low and was signaling for a 20-second timeout, as well.This was Stage 1 of the Rockets' defensive confusion. 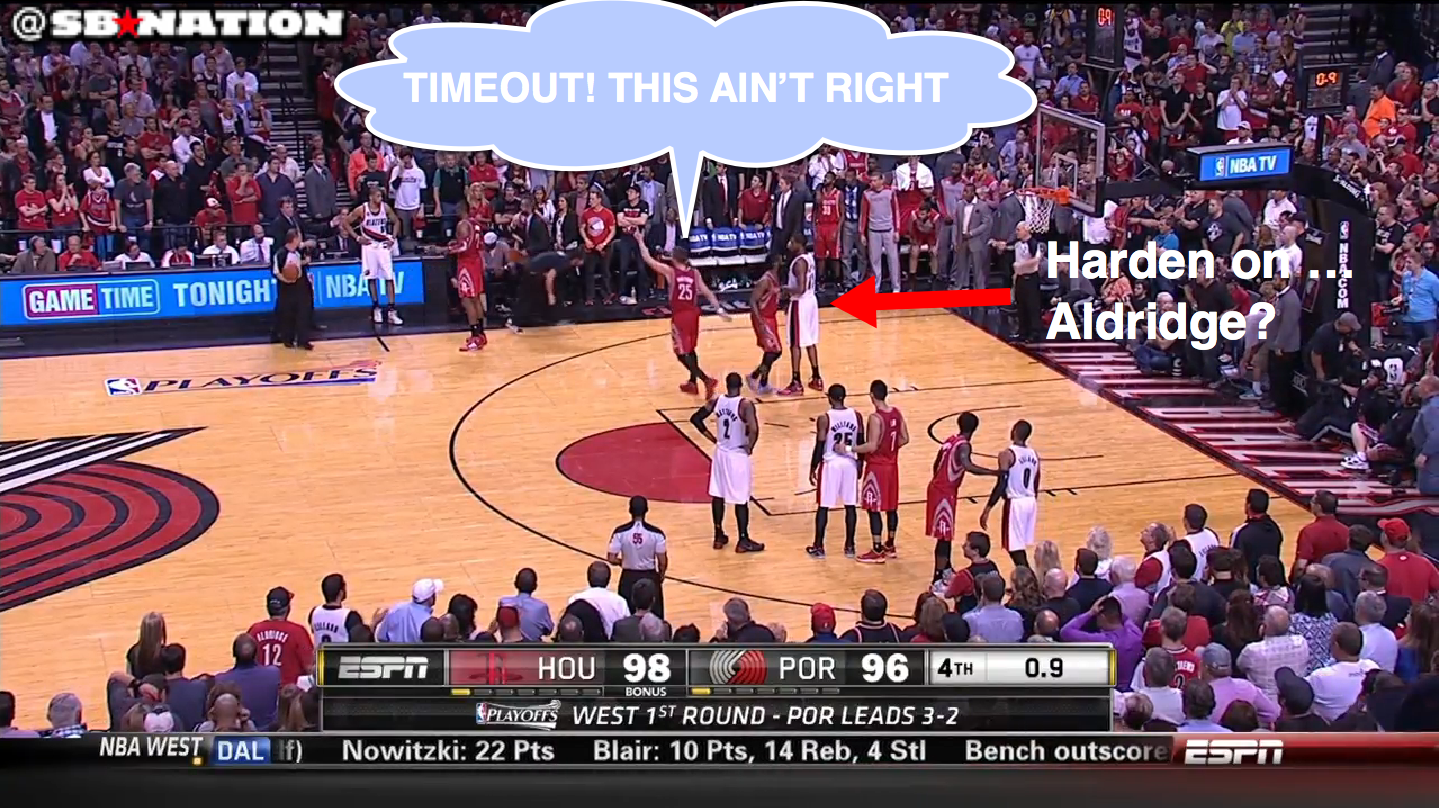 Those are ... less than ideal matchups. Therefore, the Rockets are forced to burn a timeout to get reset.

McHale uses his 20-second timeout to sub in Terrence Jones for Lin. He has also rearranges Houston's matchups by moving Dwight down onto Aldridge in the post and having Jones guard Batum on the inbounds. 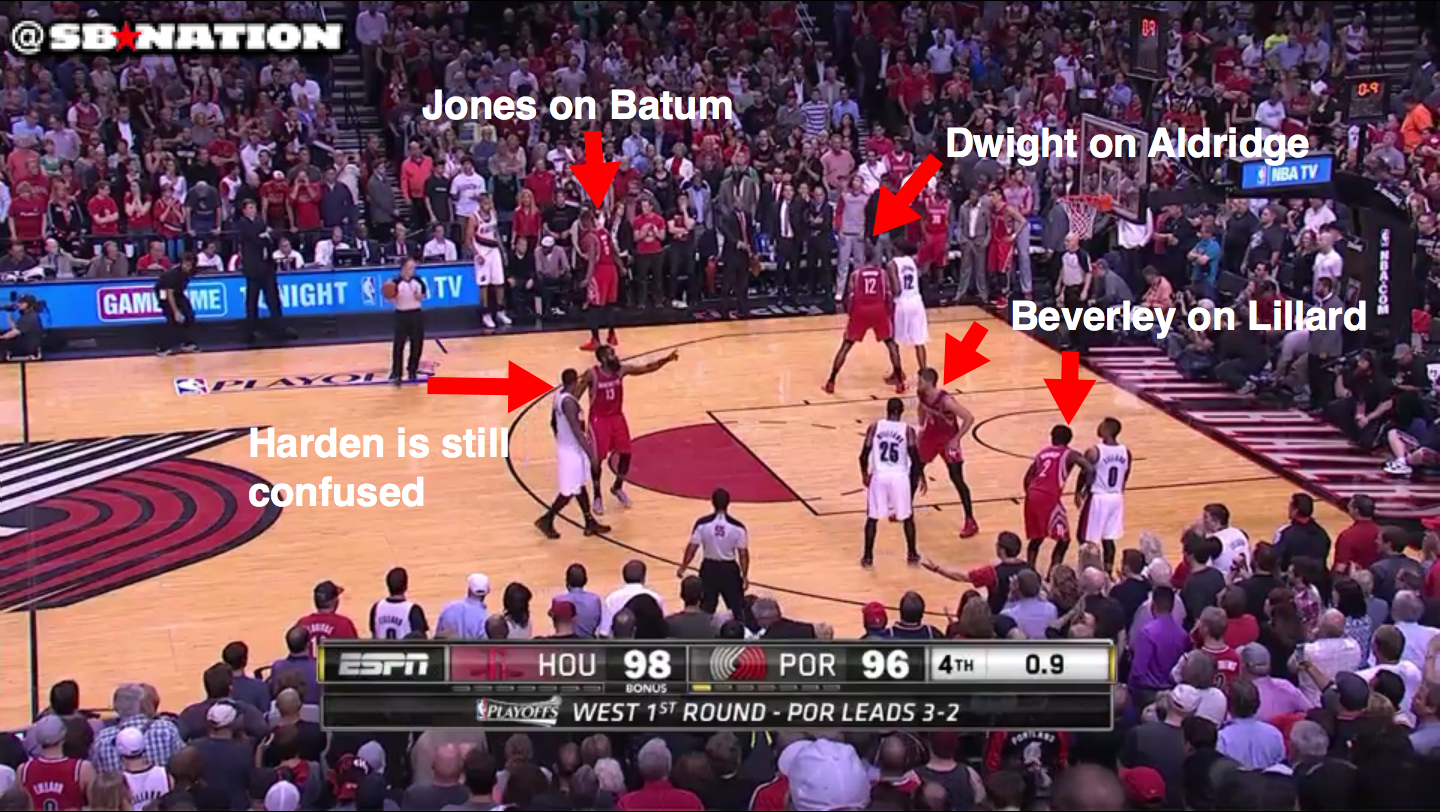 Here is the next stage of the Rockets' implosion. As Howard fights to establish position on Aldridge's top side, Beverley and Parsons are in deep conversation about who will cover Lillard. Beverley originally starts on Lillard before he and Parsons switch assignments. This maneuver shouts out that Houston will be switching any potential screen action that Portland will run. 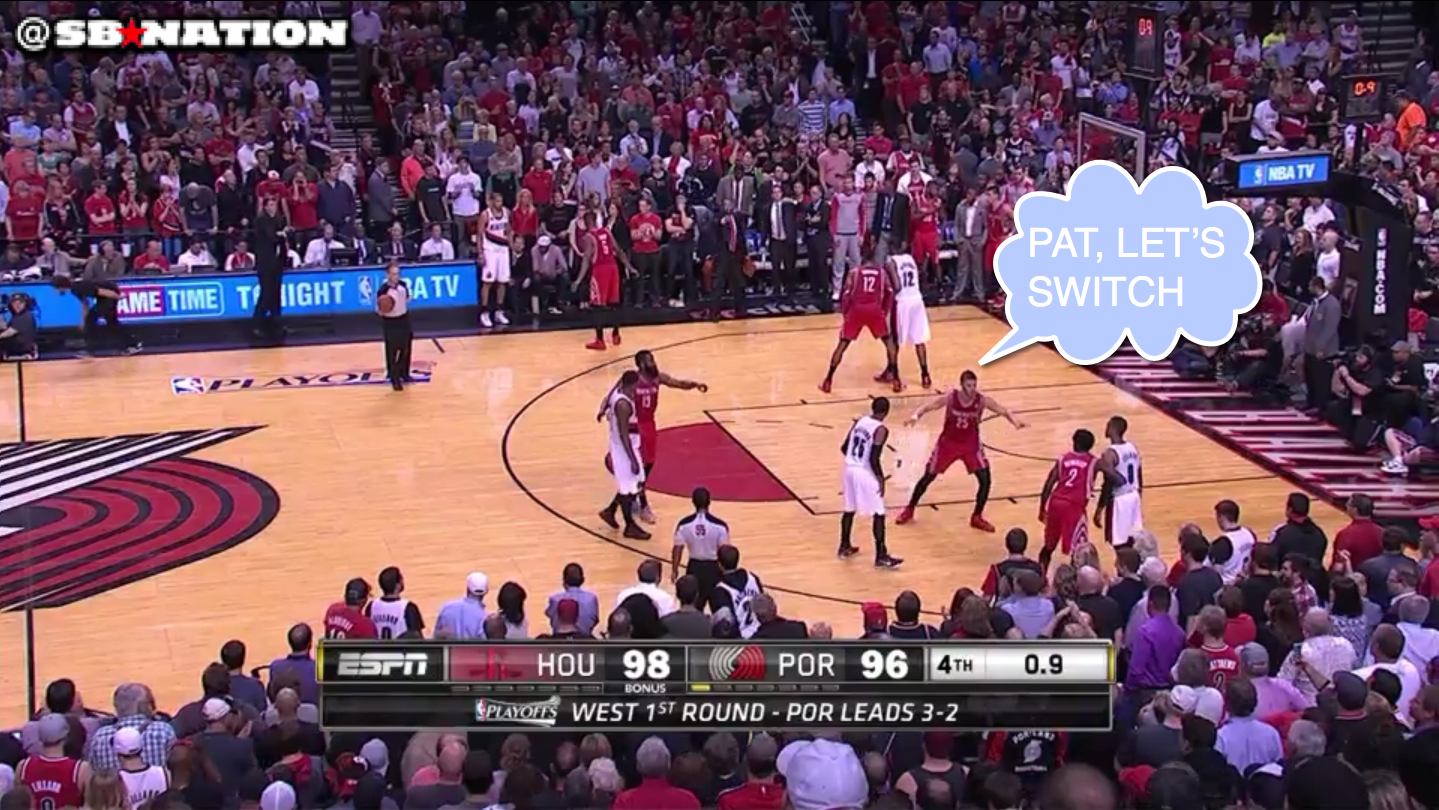 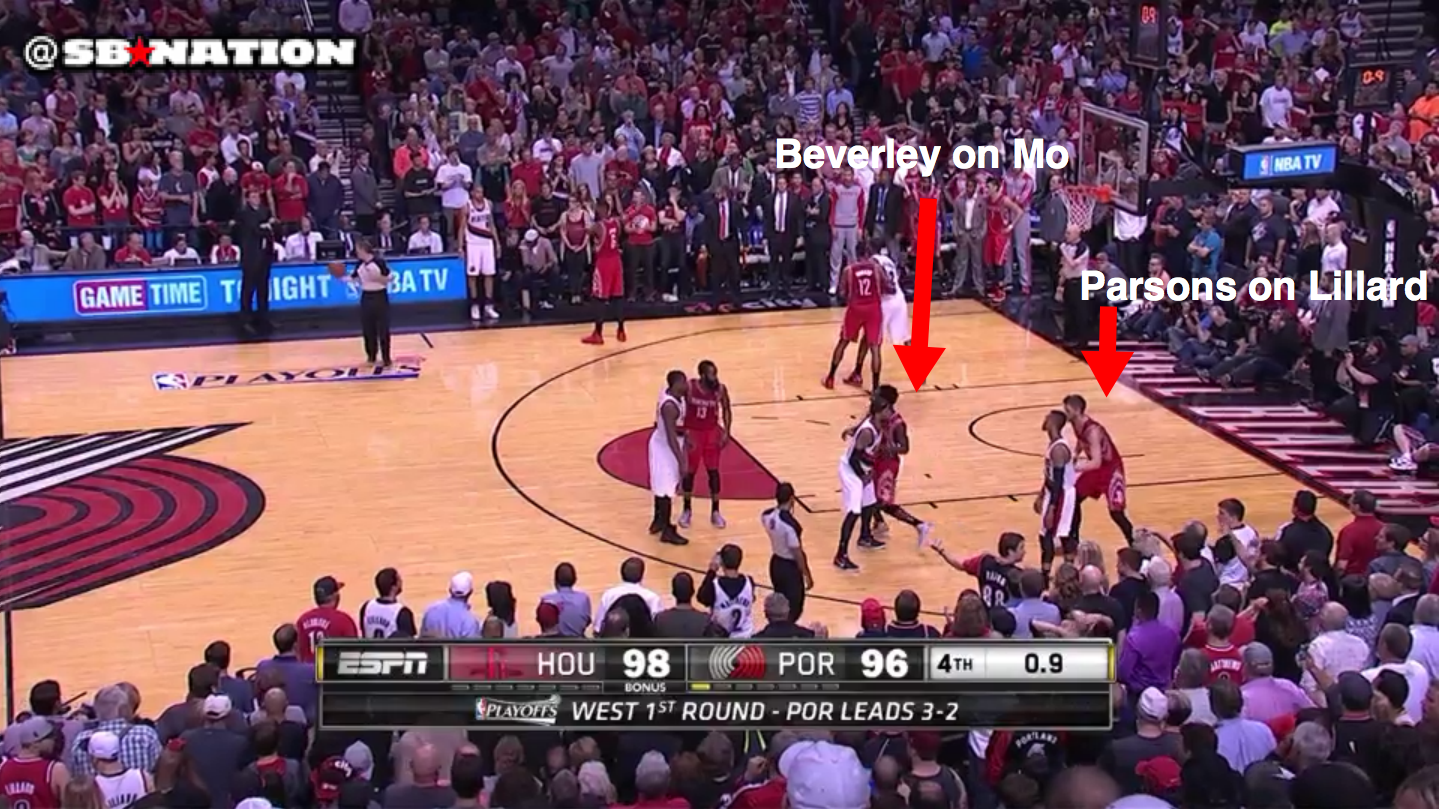 The cast is now set. Jones is on Batum. Harden is on Matthews at the top of the potential picket fence. Beverley is starting on the rim side of Williams and is also in in an ideal spot to slide under any potential Matthews screen to recover up top if necessary. Finally, Parsons is marking Lillard at the potential "GO" spot of the Blazers' action.

But just before Callahan hands Batum the ball, Lillard does something interesting. He achieves stillness.  We're talking Zen-like, quiet-the-body-and-mind stillness. Deep, cleansing stillness. But when Lillard sees the ball handed off to Batum, he explodes like he has just been shot out of Blazers' t-shirt canon. 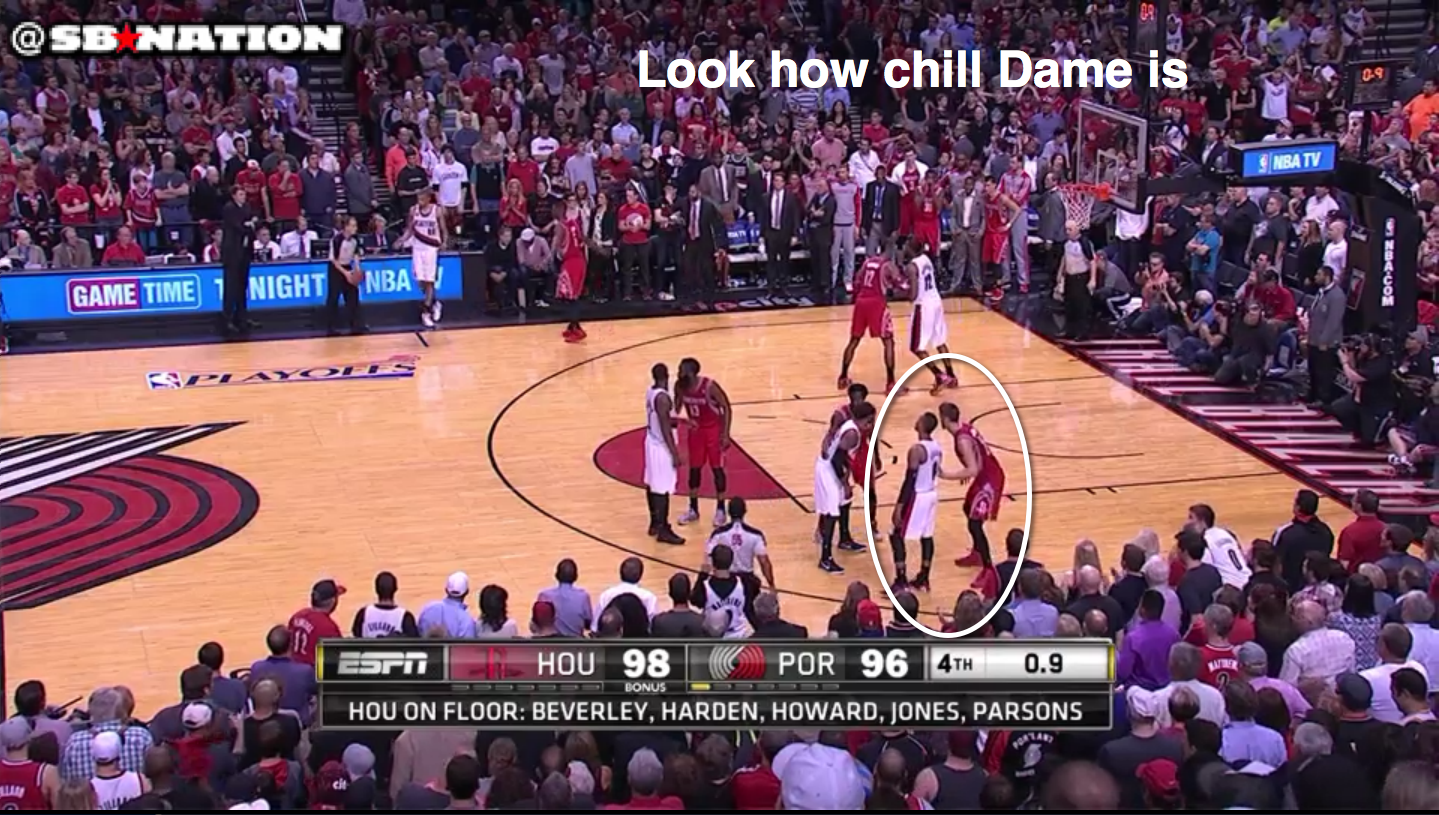 Lillard is wide open after his third step, with Parsons already a full two steps behind. As Lillard reaches his third stride, he frantically starts clapping to alert Batum that he is really open.

Why the clap? Because Batum is locked in on Aldridge in the post.  After watching the video a few hundred times, it is apparent that Aldridge was the actual first option on the play. Portland was hoping for a full front from Dwight (which it actually ended up getting) and was looking to go over the top for the tying basket. 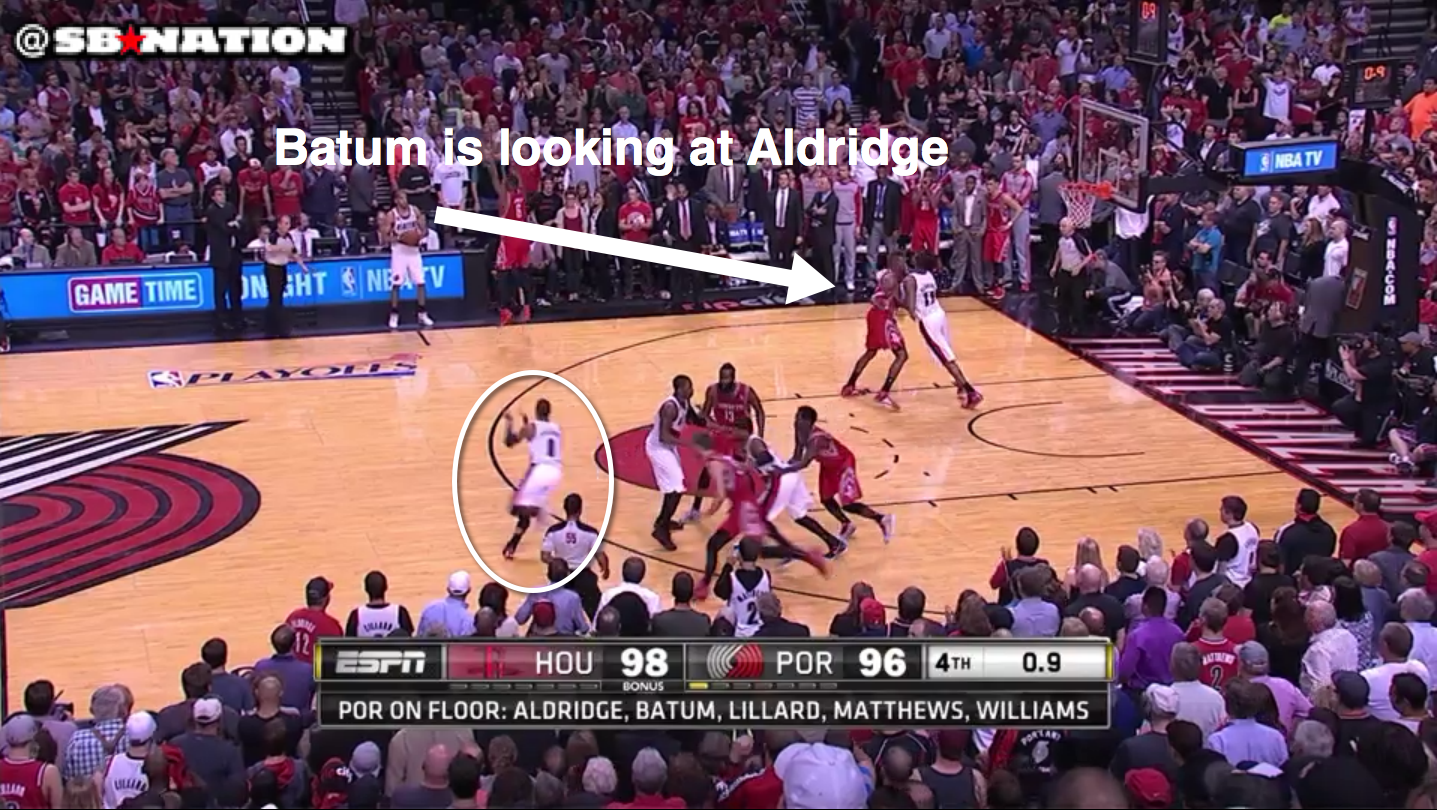 Lillard, the original second option, finally catches Batum's attention, and Nic recognizes just how open Lillard is. Batum hits Lillard a tiny bit late with the pass, but still basically in stride. Parsons, who has been playing catch-up all the while, needed two big strides to close out on Lillard. Even then, there is still a big gap between the them. 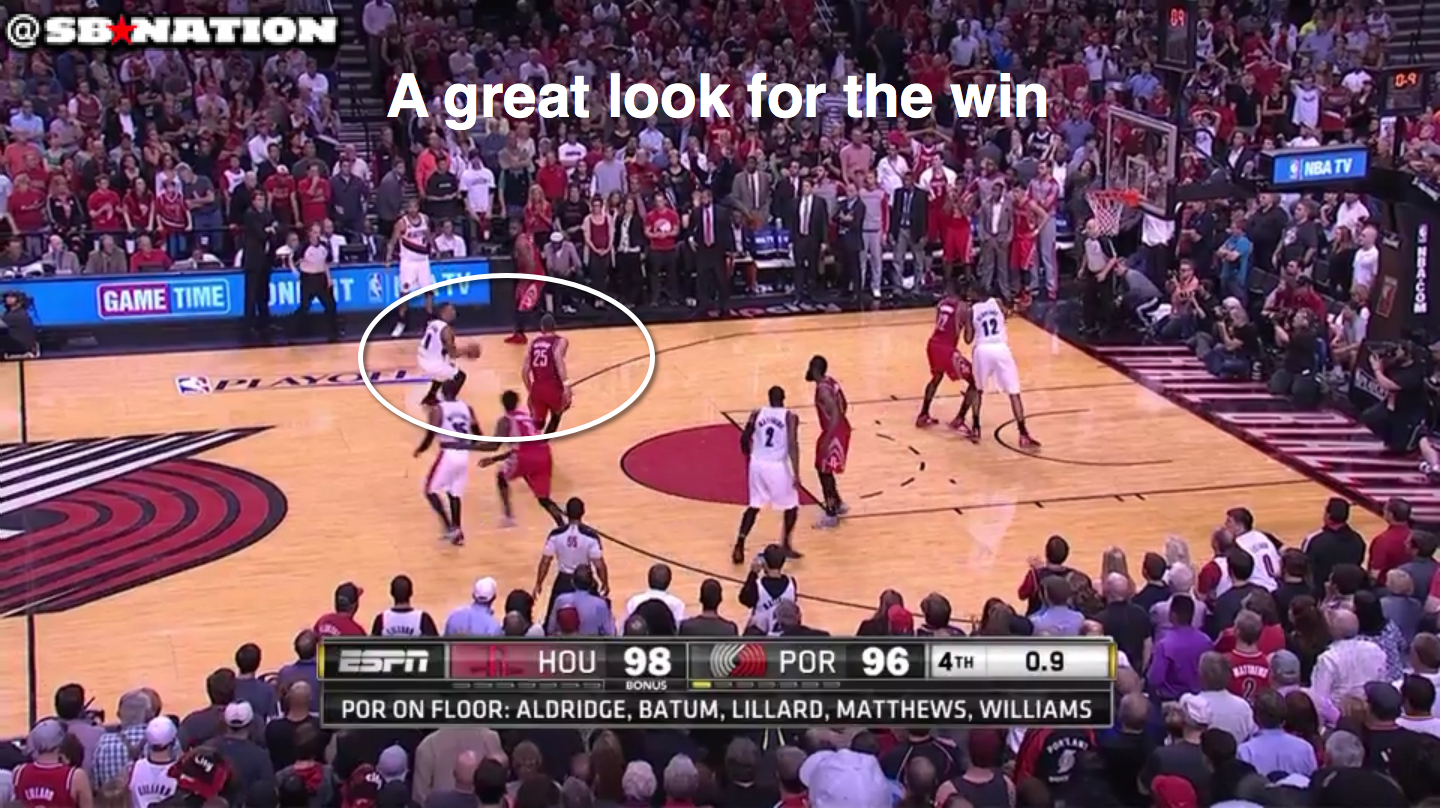 This is the shot every player dreams of making growing up, whether in the driveway or on the playground. Nothing but net for three. Game. Set. Walk-off.

I don't normally like second-guessing coaching decisions, because as a coach myself, I find it disrespectful most of the time. I'm not in the team's room or in its huddle, so it's often tough to know just what has been communicated between the coach and players.

In this case, though, I'm going to be the good third-party assistant and become a "professional suggester."

Damian Lillard needs to play without a conscience

Why the Portland Trail Blazers' best chance to beat the San Antonio Spurs is for Damian Lillard to shoot as often as possible.

Damian Lillard needs to play without a conscience

The Houston Rockets should have been switching EVERYTHING with their three perimeter players. Hand off the coverage right down the line. They would still be in a position to cover any backdoor lob actions. A skip pass to someone on the other side would be extremely difficult. The last man to switch could push the first cutter, Lillard, higher up the court than he would be comfortable.

Given Beverley's and Parsons' first switch before the play even began, it appears that was the Rockets' strategy. Instead, they ended up with Parsons falling way behind Lillard, Beverley locking and trailing on Williams, and Harden hugging Matthews like they were waiting for the next Luther Vandross song to come on and end the junior high prom. Confused matchups and an even more confusing strategy led to a lack of communication on D, and that ultimately caused the Rockets to head home.

Houston gave a talented and cold-blooded Lillard an opening. Like A-List actors everywhere, he responded to the directing challenge. Individual brilliance, in this case, won out over ATO design.