The Spurs reach basketball nirvana with absurdly hot first half

The Spurs opened Game 3 on the most fire.

Share All sharing options for: The Spurs reach basketball nirvana with absurdly hot first half

The Heat started Game 3 in Miami shooting excellently. Threes were falling, LeBron James was hot and none of it mattered. Not even remotely. They might as well have saved all that basket-making because the Spurs shot over 90 percent from the field over the first 16 minutes of the game. That, according to the broadcast, is the best shooting first half in NBA Finals history.

Again: NINETY PERCENT from the field. 19 of 21 shots. 90 PERCENT. OOOOOXOOOOXOOOOOOOOOO. Only one qualified player in the NBA hit free throws that accurately during the regular season. That kind of shooting breaks the shot chart machine:

According to shot chart handed out at the game, Spurs are shooting so well that Kawhi hit a 3 from out of bounds pic.twitter.com/6VeNvs3Nqt

That kind of shooting makes one suspect cheating:

The Spurs before the game: pic.twitter.com/YchdBikiDd

That kind of shooting makes our Spurs blog kinda lose it:

I feel euphoria. my face is numb

How do you hit 19 of 21 shots? It has to involve some beautiful, fundamental basketball:

...but it also takes some outright nonsense.

Kawhi Leonard alone scored 16 points in the first quarter on 5-of-5 shooting, obviously a career-high for a period. He literally could not miss early on, totally eclipsing LeBron's excellence. He buried a few threes and trucked through gigantic human beings like it was nothing:

And Manu Ginobili gave the first quarter a fitting conclusion. He actually tried to miss this shot but the rim was like "lol no we're not doing that right now":

San Antonio finally missed some shots in the mid-second quarter, so they ended the half with just 71 points on 25-of-33 shooting. 75.8 percent shooting. Psh. That doesn't even look that impr-- 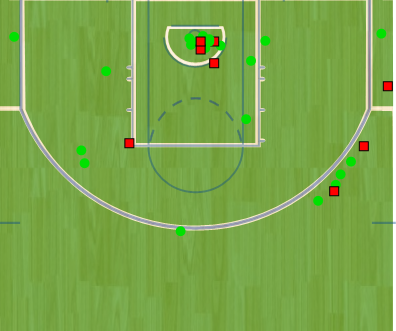 Okay, that's a lot of green.